Being an art student I was quite fascinated about these round playing cards, they caught my attention and made me more curious, what was so different about Ganjifa?
From the shape of cards to the rules of the game, the name and its entire history, just about everything was different, and I started looking for more information about them.

The Story of Ganjifa~ 'Ganj' being Persian for treasure!

In June 1527 Babar, founder of the Mughal dynasty, sent a unique gift to a close friend from Sindh, Shah Hasan. It was an exquisite set of Mughal Ganjifa round playing cards, each  hand-painted on ivory and inlaid with precious stones. Little did he know that he was going to spark off an entire continent’s passion for playing cards! By the sixteenth century, Ganjifa cards became one of the most popular forms of entertainment for royals and commoners alike.

Mughal Ganjifa: History says Mughal and Hindu ganjifas were very common and had grabbed all the limelight. The present game of Mughal Ganjifa was introduced by Akbar. The Mughal ganjifa carried an eight suited ganjifa pack and had 96 beautiful cards in eight suits of 12 cards each. The twelve cards in each suit comprised of two court or figure cards and ten numeral or pip cards.

Akbar simplified the game. Eventually two main styles emerged, a 96-card Mughal ganjifa and a Hinduised 120-card Dashavatara based on Vishnu’s ten avatars, much played in Bengal, Odisha, Rajasthan, Madhya Pradesh and Nepal. The elite used ornate sets made of ivory or tortoise shell inlaid with precious stones, while commoners used cheaper sets made from wood or palm leaf.

As Ganjifa Cards gained popularity in the 16th century, the inevitable occurred. They somehow developed a distinctly Hindu flavour.

Dashavatar Ganjifa cards with each suit depicting each of the ten incarnations of Vishnu, became the rage. Brahmins began to believe that playing with these cards washed away one’s sins. If nothing else, it was a great way of reciting the names of Gods! So, it came to pass that Ganjifa Cards imparted sacred hues to a profane activity like card playing.
They came to be played in temple courtyards and it was not uncommon to hear players say, “My Rama beats your Varaha!” or “There is no card higher than the Narsimha at dusk!”

Today, these echoes are but a fading memory. Painted in the homes of a handful of artists and played by a dying breed of aficionados, Ganjifa Cards are in grave danger of being lost in oblivion. The only hope of survival for this amazing game is for people to start playing it again, and let history and mythology come to life once more.

Dashavtara Ganjifa:
One of the earliest sacred myths that Ganjifa embraced was of the ten incarnations of Lord Vishnu. It is believed that in the history of human civilization, Lord Vishnu has incarnated nine times on earth so far to eradicate evil, restore Dharma the force of good and liberate the worthy from the eternal cycle of birth and death.
Called the Dashavtara Ganjifa in Sanskrit ,daśa means ‘ten’ and avtāra means ‘descent’ the game comprises ten suits of twelve cards, each of which represent one animal or human incarnation of Vishnu. Every suit has a Raja King, Mantri minister and ten numeral cards.

Interestingly, the Dashavtara story echoes the great unfolding of evolution of life on earth. Vishnu’s first incarnation is Matsya or fish. According to science, life originated in water. From water, life eventually moved partly to land.

Vishnu’s third incarnation is Varaha or the boar. Life evolved from four-legged to two-legged creatures, and correspondingly.

Vishnu’s fourth incarnation is of Narsimha or the man lion, a fierce avatar of the Hindu god Vishnu, one who incarnates in the form of part lion and part man to destroy evil and end religious persecution and calamity on Earth, thereby restoring Dharma.

Vamana, fifth of the ten incarnations ~ avatars of the Hindu god Vishnu. In the Rigveda, Vishnu took three strides, with which he measured out the three worlds, earth, heaven, and the space between them. Vishnu in this form is often identified as Trivikrama “God of the Three Strides”.
Soon, but only in evolutionary terms, the first humanoid species walked the earth. Vishnu’s first human incarnation is Vamana or dwarf. As the humanoid species began standing erect.

Vishnu’s sixth incarnation is Parshuram, a physically well-developed and ferocious warrior. Eventually, humans evolved into societies and the first religions came into being. Parashuram, Ram with an axe, also referred to as Ram Jamadagnya, Ram Bhargava and Veerarama, is the sixth avatar of Vishnu in Hinduism and he is one of the Chiranjeevis long-lived ones or immortal ones, who will appear at the end of the Kali yuga to be the guru of Vishnu's tenth and last avatar, Kalki. He carried a number of traits, which included aggression, warfare and valor; also, serenity, prudence and patience.

Vishnu’s seventh incarnation was Ram, the Maryada Purushottam, embodiment of morality and righteousness.
Ram or Ramacandra his adventures, notably the slaying of the demon king Ravan, are recounted in the Vana Parva of the Mahabharat and in the Ramayan, the oldest Sanskrit epic, written sometime in the 5th century BCE but with some later additions.

Krishna is a major deity in Hinduism. He is worshipped as the eighth avatar of Vishnu and also as the supreme God in his own right.He is the god of protection, compassion, tenderness, and love and is one of the most popular and widely revered among Indian divinities.Krishna's birthday is celebrated every year by Hindus on Krishna Janmashtami according to the lunisolar Hindu calendar, which falls in late August or early September of the Gregorian calendar.
The eighth avatar of Vishnu ~Krishna, the ideal yogi who is well versed in statecraft.
He represents the time in human evolution when countries were being formed and wars fought.

The ninth incarnation of Vishnu is Buddha, representing the stage in evolution when man is capable of spiritual thinking and enlightenment.

Kalki ~ Kalkin is the tenth avatar of the Hindu god Vishnu prophesied to appear at the end of the present Kali Yuga age to punish the wicked, reward the good, and inaugurate the Satya Yuga age of sacrifice and dharma.
The last incarnation of Vishnu, Kalki, is yet to manifest itself. When it does, it will portend the end of mankind.

The Making of Ganjifa:
Ganjifa Cards are a labour of love. They are painstakingly crafted upon a canvas that is made from old saris, painted using colours pounded out of stones and leaves and then finished with layers of natural gum. It is no wonder then, that each set of cards takes as many as thirty days to make.
Preparing the canvas
For Ganjifa artists, preparing a perfect canvas is as important as the painting. Canvases are prepared from old cotton saris
that are soft and starch-free.
These are soaked in a solution of crushed tamarind seeds and water for four to five days, which is then sun-dried . A layer of similarly processed cloth is placed on top. After the layered cloth is dry, a paste of chalk powder, tamarind and gum is applied on both sides. This dries into a tough, hard base. Artisans buff this into a smooth canvas using locally available stones. Now, one week into its production, the canvas becomes ready for painting.

Painting:
Traditionally, Ganjifa Cards were painted with mouse-hair brushes and natural colours like White from powdered conch shells, Green from various leaves, Black from lamp soot, Red from a stone called Hingulal, Blue from a stone called Khandneela and Yellow from a stone called Hartal.
First, the canvas is hand-cut into a perfect circle. An intricate border is painted around its edge. The artist then says a prayer to Vishnu and outlines his figure first with pencil and then with thin white brushstrokes. Then he paints on the clothes and ornaments.
Secondary motifs are then outlined in black. Last, the whites of the eyes are highlighted. Interestingly, Ganjifa artists always paint freehand, beginning and ending with the colour white.

Ganjifa painting is a craft struggling on the brink of survival. A revival of interest in plthese exquisite cards could bring about a change in their fortunes, while a further drop in interest could cause them to be lost in the foggy annals of history.

Although Ganjifa Cards grace London’s Victoria and Albert Museum, Germany’s Deutsches Spielkarten Museum in Leinfelden and Austria’s Museum for Volkerkunde in Vienna, in order to bring alive the age-old magic of the game, people have to start playing with them once more! 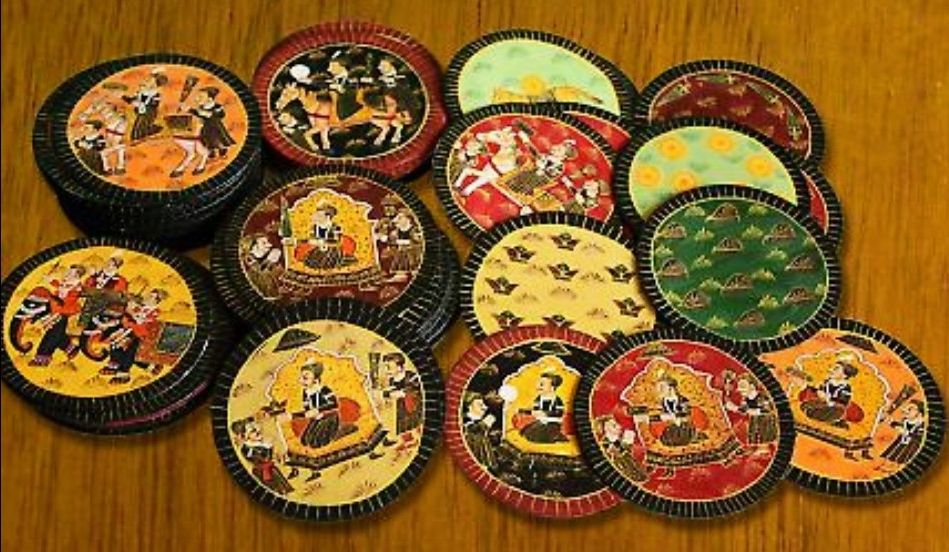 HAND-PAINTED MUGHAL GANJIFA CARDS. DECCAN INDIA, CIRCA 1850. 95 OF 96 CARDS HAND PAINTED AND LACQUERED ON IVORY AND SHOWING CUSPED ARCHES WITH GILT FLOURISHES IN THE CORNERS AND BACKS HOUSED IN PAINTED WOODEN BOX. 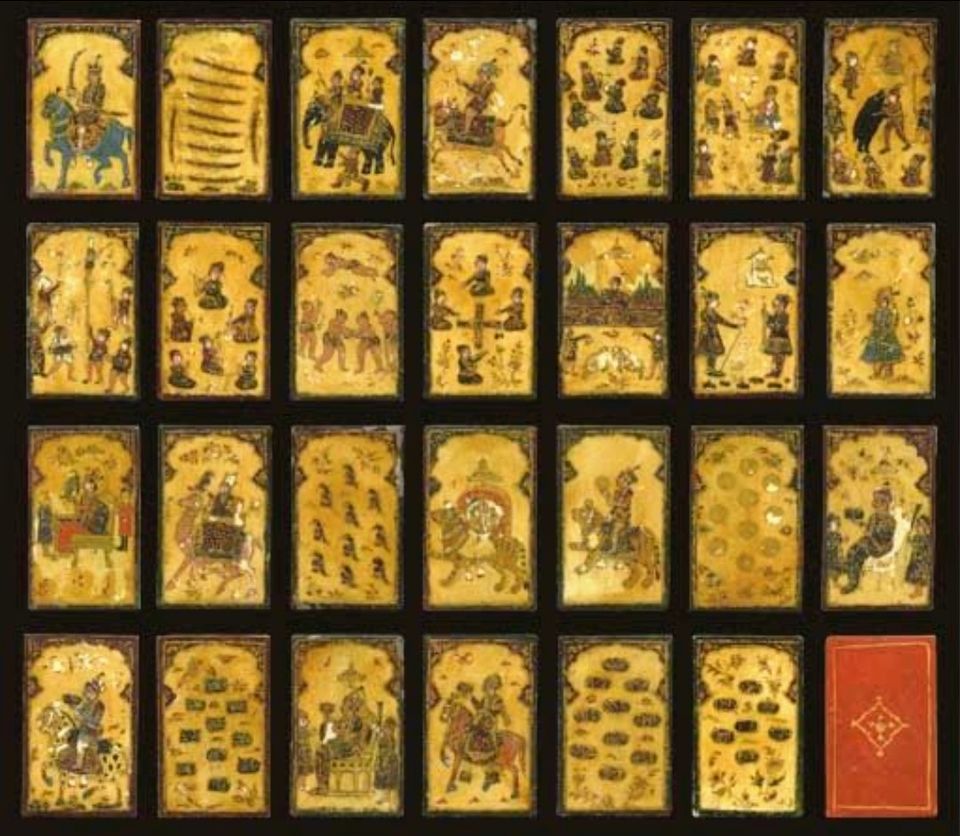 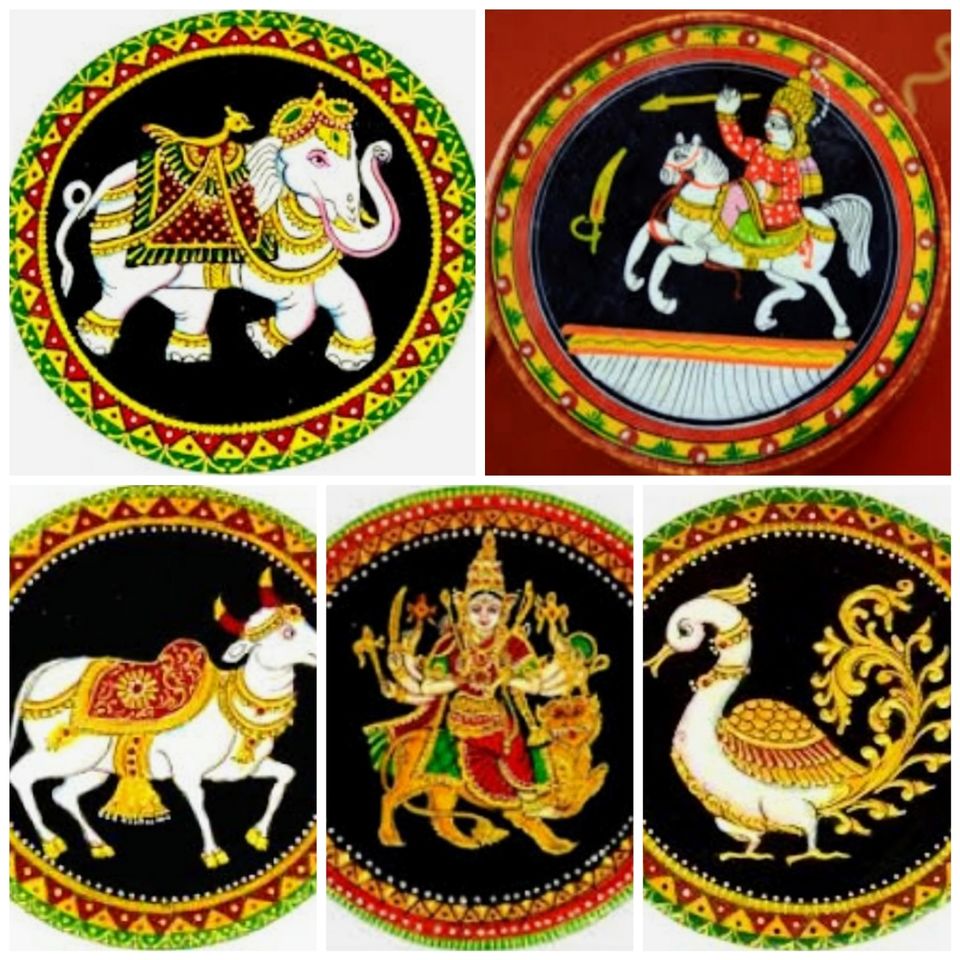 Rajmata Satwashila Devi Bhonsle, erstwhile queen of Maharashtra’s princely state of Sawantwadi.Ganjifa is never played with money,” Rajmata rebukes, “the cards have the face of god, and you never gamble with god.” 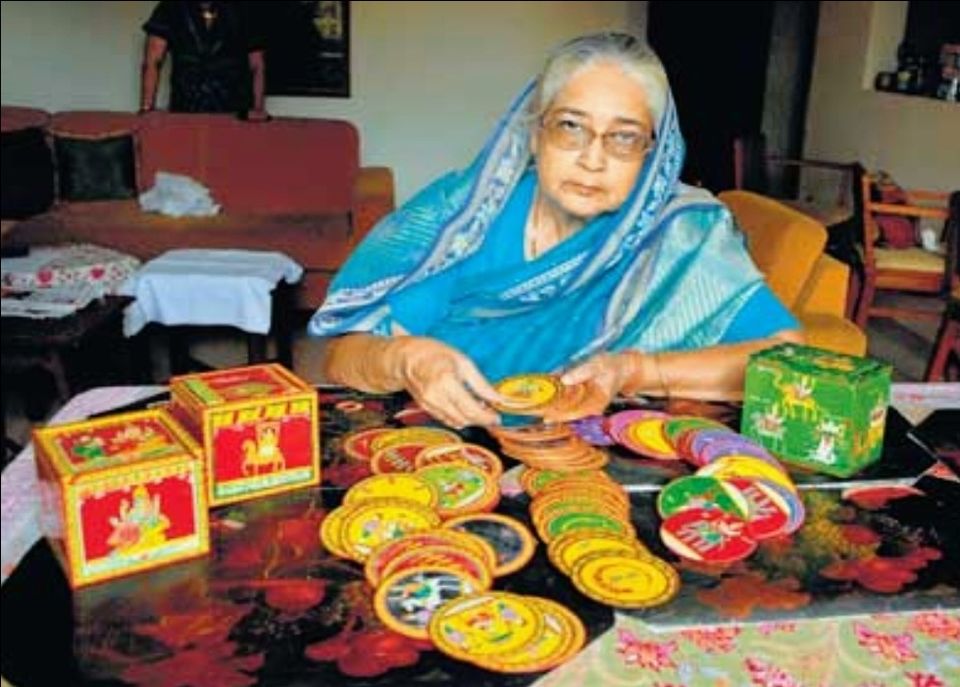 Ganjifa arrived in India over 500 years ago and was popular amongst the rajas before cheaper playing cards from Europe arrived towards the end of the British Raj. 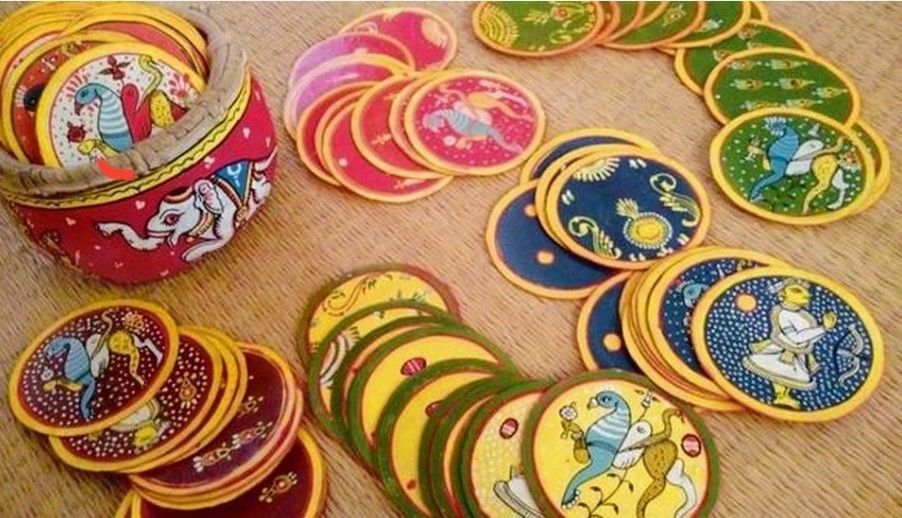 Dashavatar Ganjifa Cards from Sawantwadi Maharashtra, the Rajmata oversees the complete making of the Ganjifa Cards. 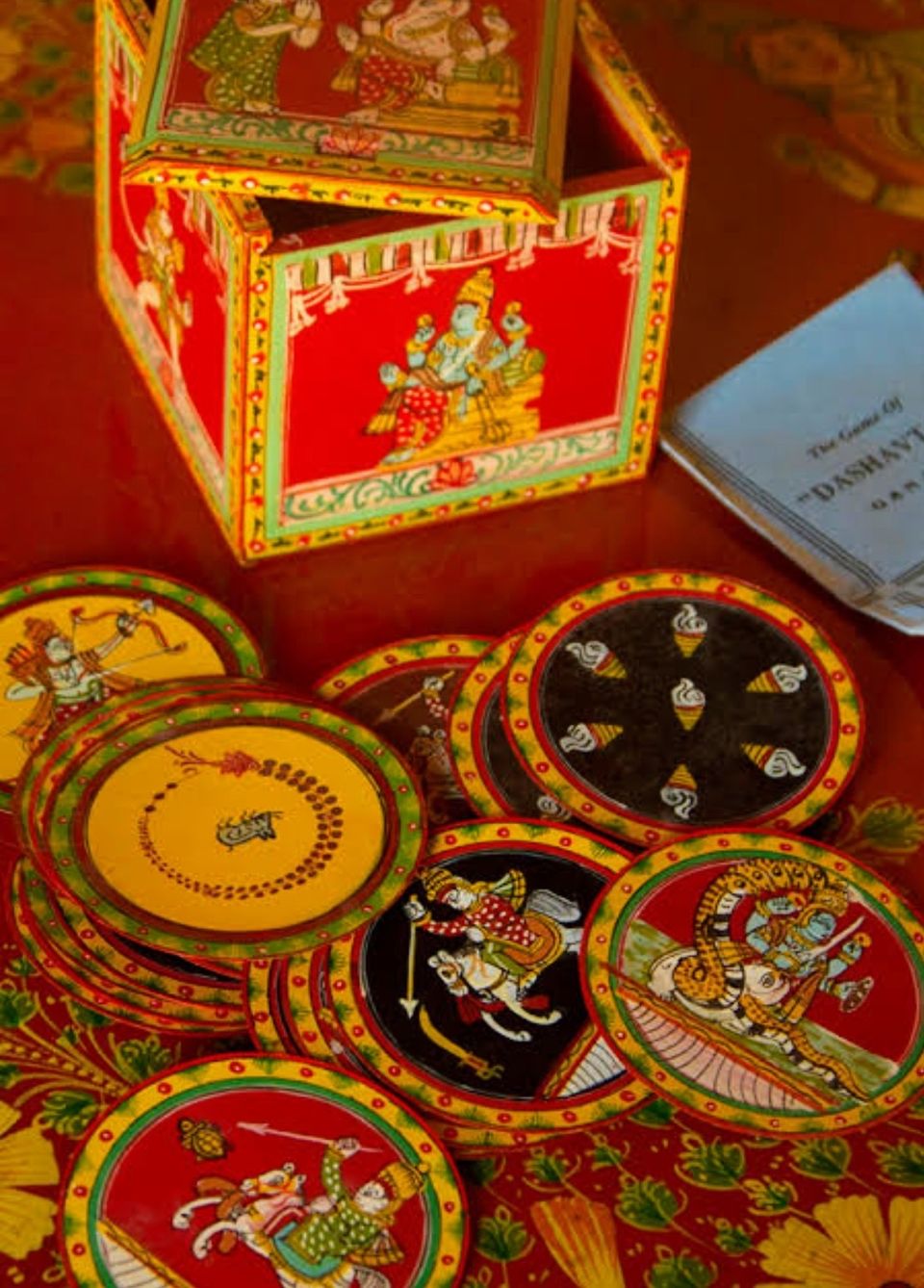 Ganjifa Cards from Odisha hand made on dried Palm leaves and painted with natural colors. 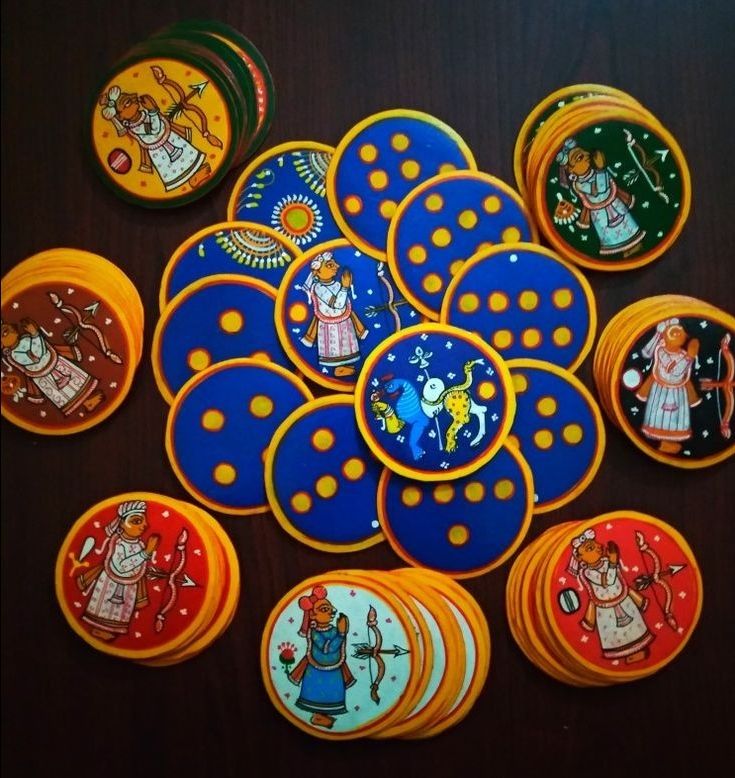 Gift Box with a set of Ganjifa Cards 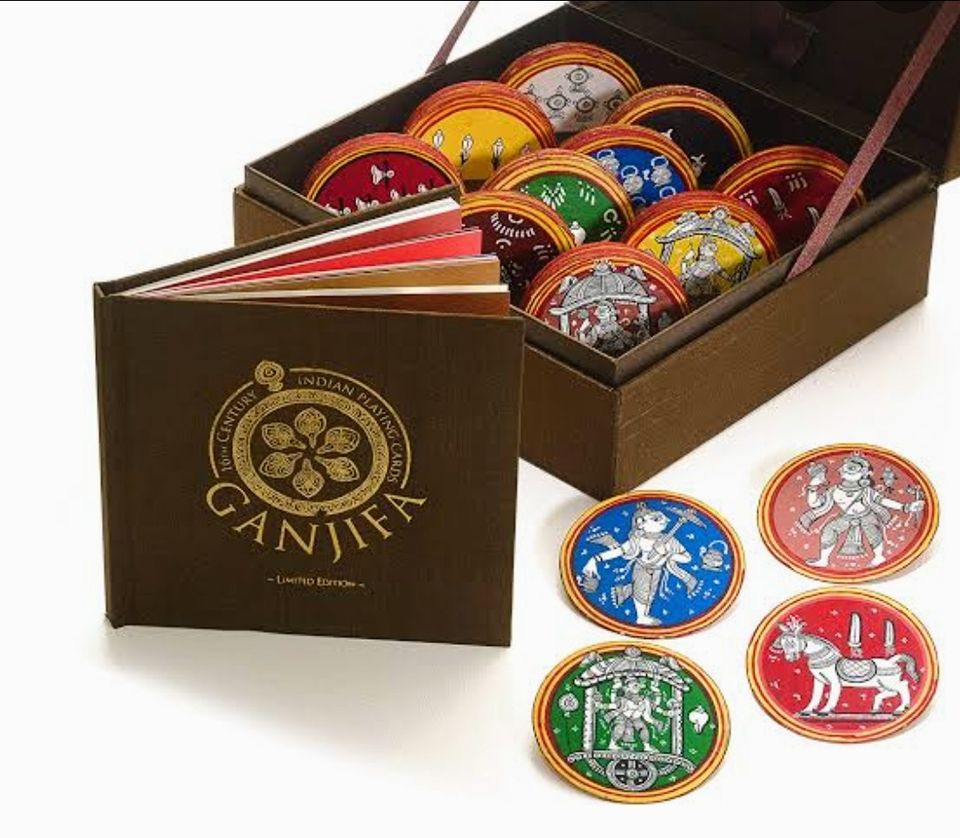 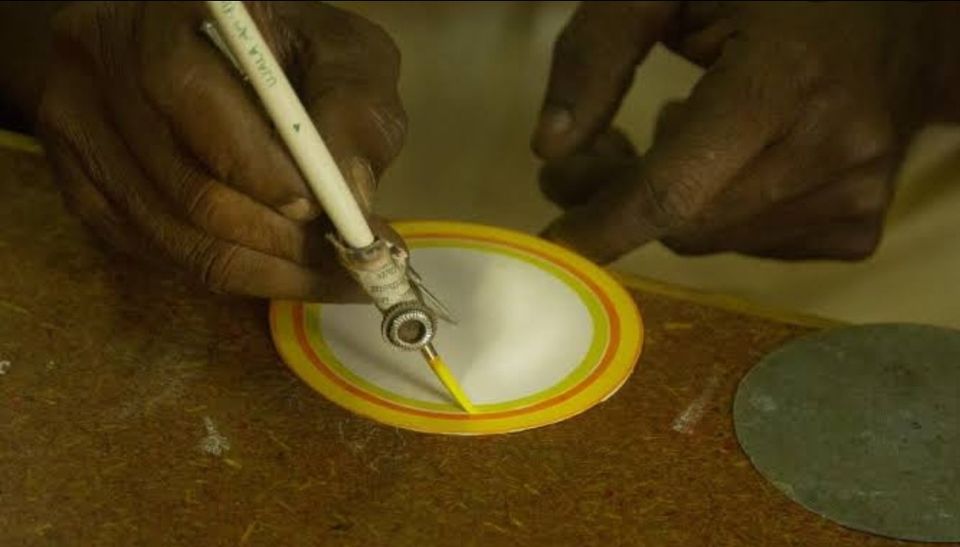 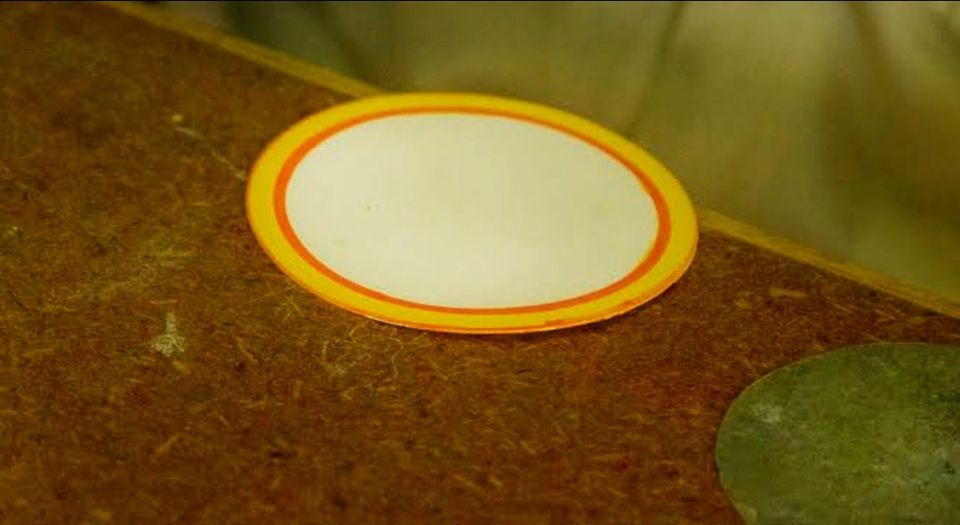 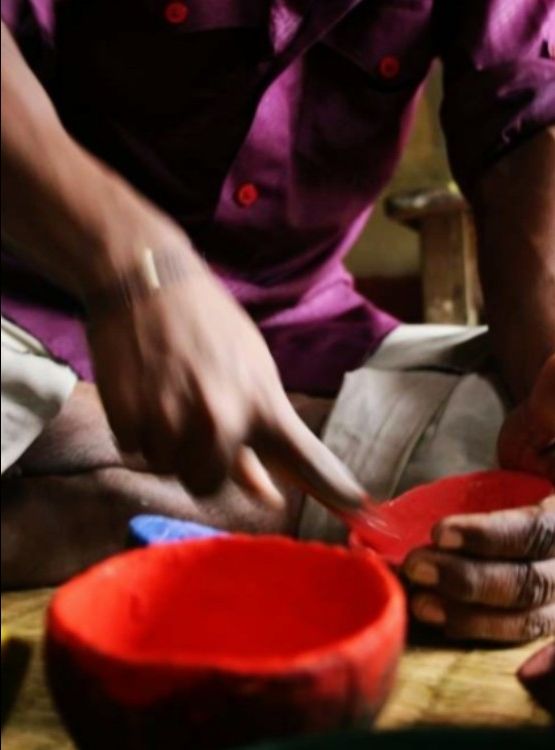 First step of painting to detailing

Painting of the Ganjifa Cards 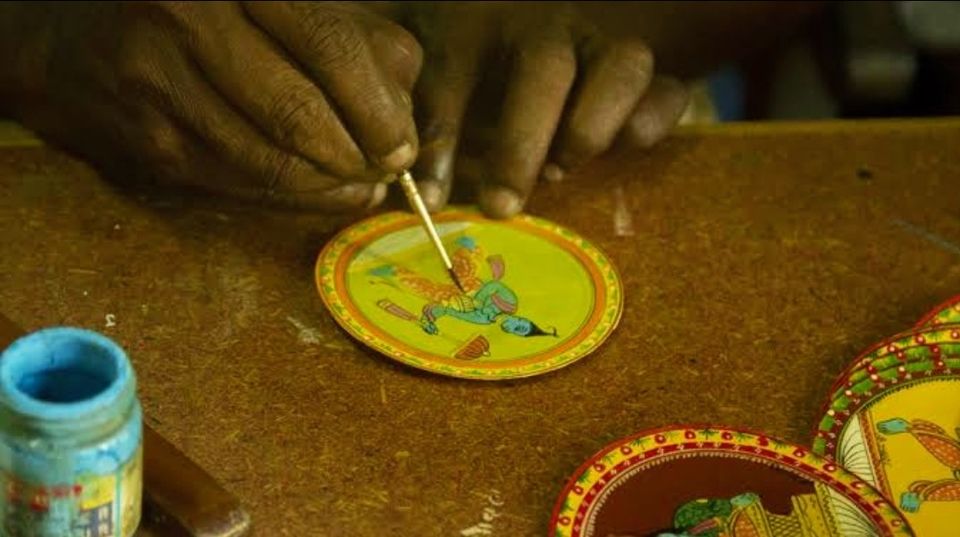