Kanha: A jungle safari in the forest of Mowgli- Part 2

Continued from Kanha: A jungle safari in the forest of Mowgli- Part 1

At 5 AM in the morning, there was a slight nip in the air. We had a cup of tea and were ready to leave for the morning safari. Two jeeps were booked for our group of 8 people, with each jeep accommodating four people, and a driver. As we got into the Gypsy earmarked for us, the attendants handed out blankets to us. The jungle, they said, is cold in the morning.

And, so we set out for our jungle sojourn.

The National park is divided into 4 zones - Kanha, Kisli, Mukki and Sarhi.

It took us around 15 minutes to reach the Mukki Gate. As early as 5.30 AM, there were already 8-10 vehicles lined in front of us. At the gate, a guide from the Forest Department accompanied us on the Gypsy and we entered the Kisli Zone.

As soon as we entered the forest, we could feel the fresh morning breeze. On either of the road were sal and bamboo forests, with an undergrowth of wild grass and thorny bushes. We could hear different bird songs coming from the trees. The guide made sure that we caught a glimpse of a bird called the Racket- tailed drongo, which was flying around from tree to tree, and a pair of owls peering out of a tree hole.

Thereafter, the road diverged and the two jeeps went on different routes, and soon we lost sight of our friends.

Deer and Monkeys - a symbiotic relationship

We passed through large meadows of rolling grasslands inside the jungle, where we saw groups of spotted deer grazing at various places. The white spots shining over their tawny skin and the beautiful antlers, made the spotted deer look very pretty. Langur monkeys were jumping on the trees nearby. 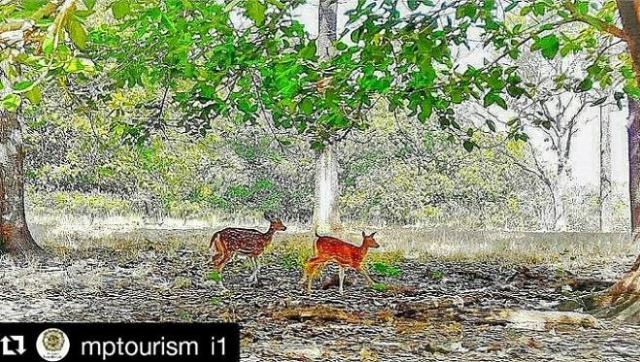 It is said that deer and langur monkeys have a synergistic relationship and are mostly found grazing in proximity. Monkeys perched up on the trees throw down fruits on which the deer feed. The deer, in turn, with a keen sense of sound and smell, give a forewarning call as soon as they sense danger from the predator tiger. On hearing the deer's call, monkeys quickly climb up higher on the trees, from where they can see the tiger. When they spot the tiger from a high vantage point, the monkeys give out a cry, which further alerts the deer and tells them which way to run.

'That is the language of the jungle,' our guide corroborated.

It was cold inside the jungle and we had wrapped the blankets over us. As we crossed any other vehicle, the drivers would stop and exchange notes about warning calls, pug marks and big cat sightings. From the expressions of the occupants of a vehicle, one could make out if they had seen a tiger or not.

Discussing the possibility of a tiger sighting at the lake, where the tiger comes in the morning to have water, our driver and guide decided to stop near the lake. The day was growing warmer. We waited for about 15-20 minutes but it was of no avail, so the driver decided to head for the breakfast spot. Just as they were laying out the breakfast, a langur monkey wanted a share of it, but our guide told it off.

When we were leaving after breakfast, we saw our friends in the other Gypsy entering the breakfast ground. Surprisingly all our friends looked very ebullient. A girl, almost jumping with excitement, shouted out to us that they had seen the tiger with her three cubs frolicking in water by the lake.

They further added that jeeps had lined up by the lake to enjoy the show.

Oh boy! That was quite some news. We hurried towards the lake, but our luck betrayed us. The tigress and her cubs had left. The fact that our friends in the other gipsy had scored above us in terms of tiger sighting, made us go green with envy.

"We must have a tiger sighting to catch up with the other group," all of us in the jeep unanimously agreed.

With that objective in mind, we moved around in the jungle before returning to the resort at 11.30 AM.