Mother Daughter Travel Diary- In to the untold story of Bleeding Goddess and Peacock Island! 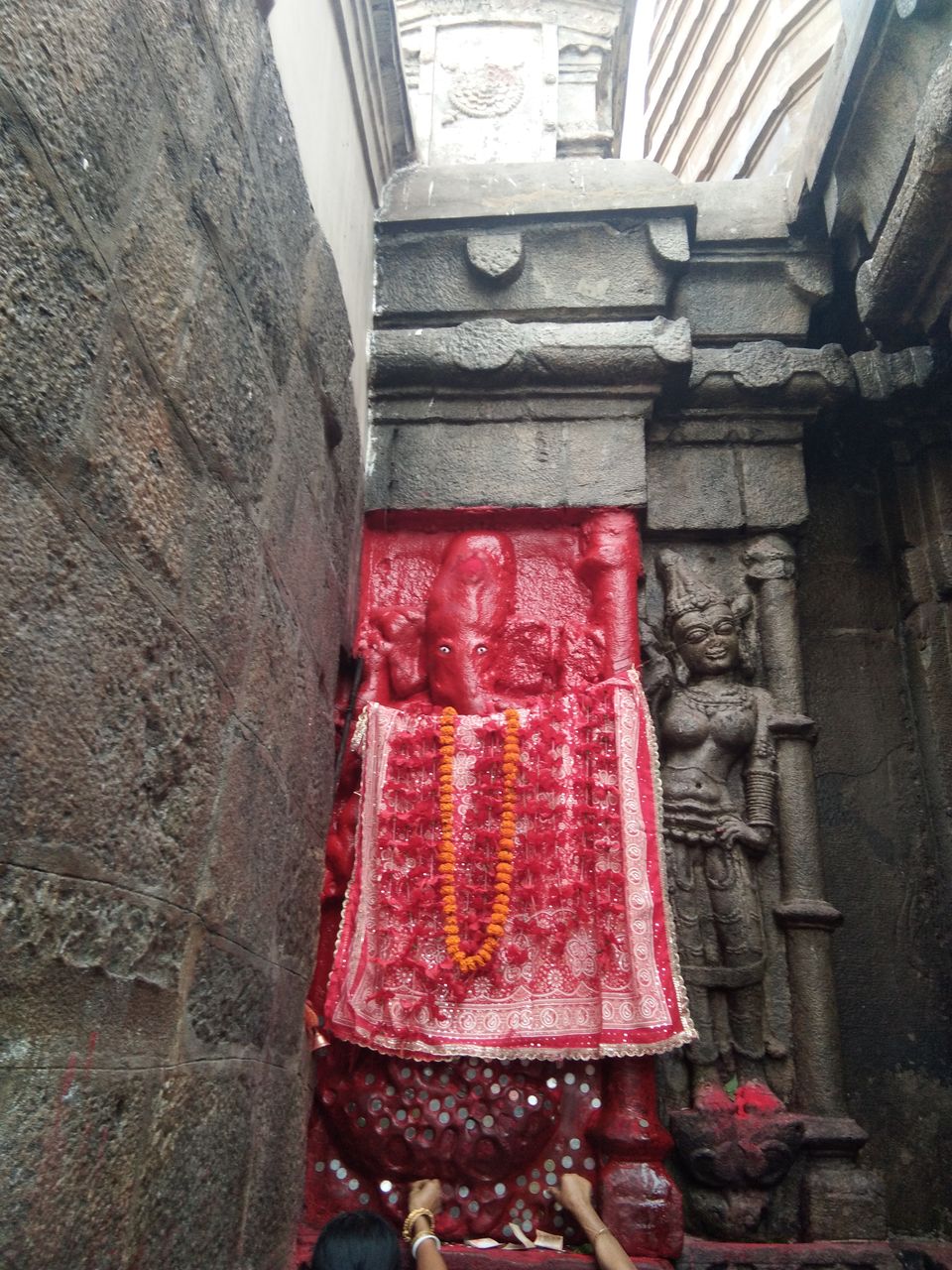 While we were waiting for the ferry to take us back to the other end then suddenly a ship with full on music in the evening amidst the mighty river caught my attention. It was Alfresco Grand Ship which gives you a tour of Brahmaputra River with fine dining facility which also showcases the culture of Assam. The tickets can be book from same Kachari Ghat counter. 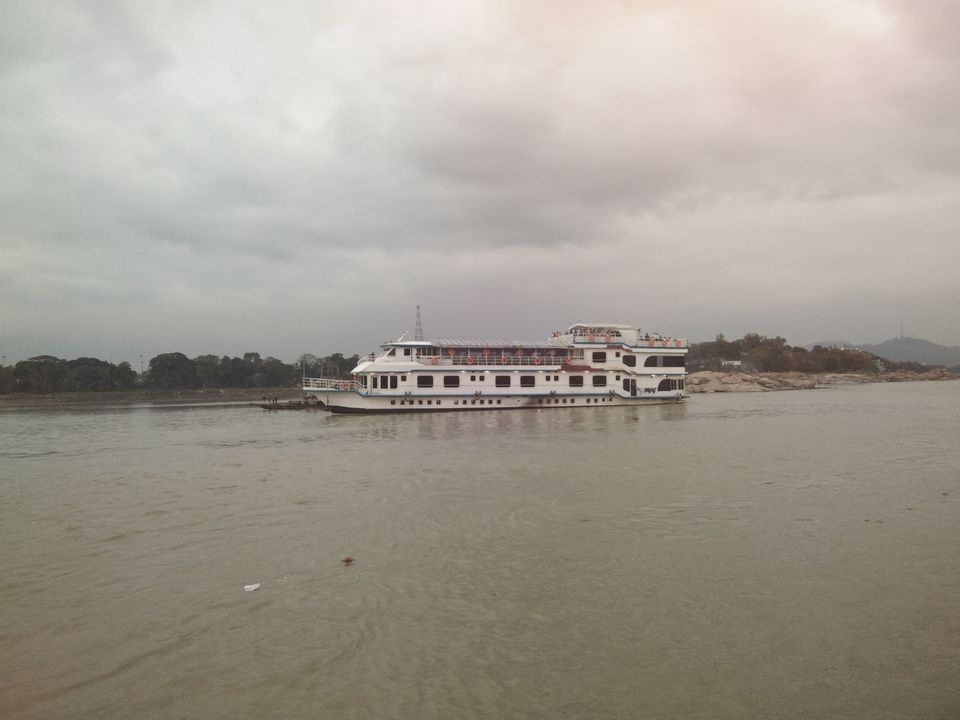 It was dusk and here we got in to the ferry and waved goodbye to the island and headed back to our guest house with some roasted corns in our hands as the evening snacks.

Mother - Daughter we had a wonderful two day pilgrimage tour which gave us a memory for life time which we will cherish forever. It is a must visit pilgrimage destination in northeast India Assam which will give you the insights of Hindu Mythology.

Mother Daughter Travel Diary- In to the untold story of Bleeding Goddess and Peacock Island in Guwahati!

Over the time mother has become my best friend and here I travel with my mother to create some memories. It is always fun to travel with your friends. But sometimes taking out time with your mother and making some travel plans will make you her one of the best friends and she will have memories to cherish forever. Probably the best gift to her during her retirement which she will remember and have smile on her face.

It was a short two days pilgrimage travel plan in Guwahati. It is one of the most sacred places in Assam to seek blessings and make your soul gain some spiritual insights.

First day, we boarded our train early morning from new Bongaigaon railway station and reached Guwahati at round 11am. I have booked my stay at SBI OTC Guwahati (Guest House). Thanks to my organization for this luxury which is situated at Bhangaghar just 5mins from Guwahati railway station.

We decided to visit the temple in the second half after freshening up in the guest house. So as per the plan we called ola cab for our ride and reached the temple at 2.30 pm which was just 20mins away from our stay and charged only Rs 50/- in share ola ride.

On our way up to the temple which we have to ride up the hill through the wavy roads, I could see the happiness in my mother’s eyes and sense the excitements in her voice. She narrated how things have changed when my father visited in his seventies and how developed and well-connected plus constructed roads are now.

The cab dropped us right in front of the gate of the temple and the Assam tourism board with one horn rhino in it welcomed us where we managed to take some mother daughter selfie. The board looked new and catchy. Thanks to Assam government. We walked together little upward towards the temple and wandering/discussing from which shop to buy some ritual items for puja. So here we found one shop where he offered to keep our sandals/shoes for free if we buy from his shop. We found the offer cost effective and agreed for the same.

Here we bent down and touch the feet of mother earth and entered through the main entrance of the temple. The weather was pleasant and welcoming as December is one of the best time for tourist in Assam. It started drizzling a little out of blue in the winter and sun still shinning at the top. So here my mother comes up with some old age belief that rain god blessed us today and I felt myself blissful and lucky.

As soon as we entered one of the priests started following us and offered for help with puja. I suggest you not to take any priest and walk straight into the puja sections. Avoiding the same I approached straight to the Gate no 2 of the temple is where you can offer puja and priest will chant the mantras for the rituals. Beside the gate 2 in the right, one can light their diyas and aggarbattis. Also has the section where you can break the coconut for puja and do the offerings.

Belief of the Temple Kamakhya is that it is one of the 51 Shakti Peeths temple where the womb and vagina of the mother goddess fell down during lord Shiv’s Tandav or dance of destruction for his beloved wife sati and the temple. Maa Kamakhya temple depicts the celebration of womenhood. It is believed that mother goddess bleeds during the month of June(Assad) where the river of Brahmaputra near the temple turns red mysteriously. In other word, mother goddess Shakti menstruates during this month. The temple remains close for 3 continuous days during that period and opens with grand celebration on the fourth day for the worshippers.

Also, Kamadev sought the womb and genitals of goddess Shaktiand gained his potency after losing his virility to a curse. So is the name Kamakhya displays in the name of lord Kamadevand the Devi was instilled which is worshipped till today.

The temple does not have any idol or image of the goddess, it is the yoni or the female genitalia located in the corner of the cave of the temple at Garvarigha.

Durga Puja during the month of October is one of the most celebrated festival in Kamakhya for hindus. Its attracts lots of tourist from several places of India on this auspicious puja to seek the blessings of Goddess Durga.

After the puja we made a tour of the temple and the walls of the temples are inscribed with idol of various Goddesses. By the time we made the tour it was dusk and enquired one of the priests about our next destination that is Umananda island. Looking at the time priest answered to my query stating that next day will be the best time to visit as it is already dawn and the temple remains opens from 9m to 4pm also we have to take ferries to cross the river. 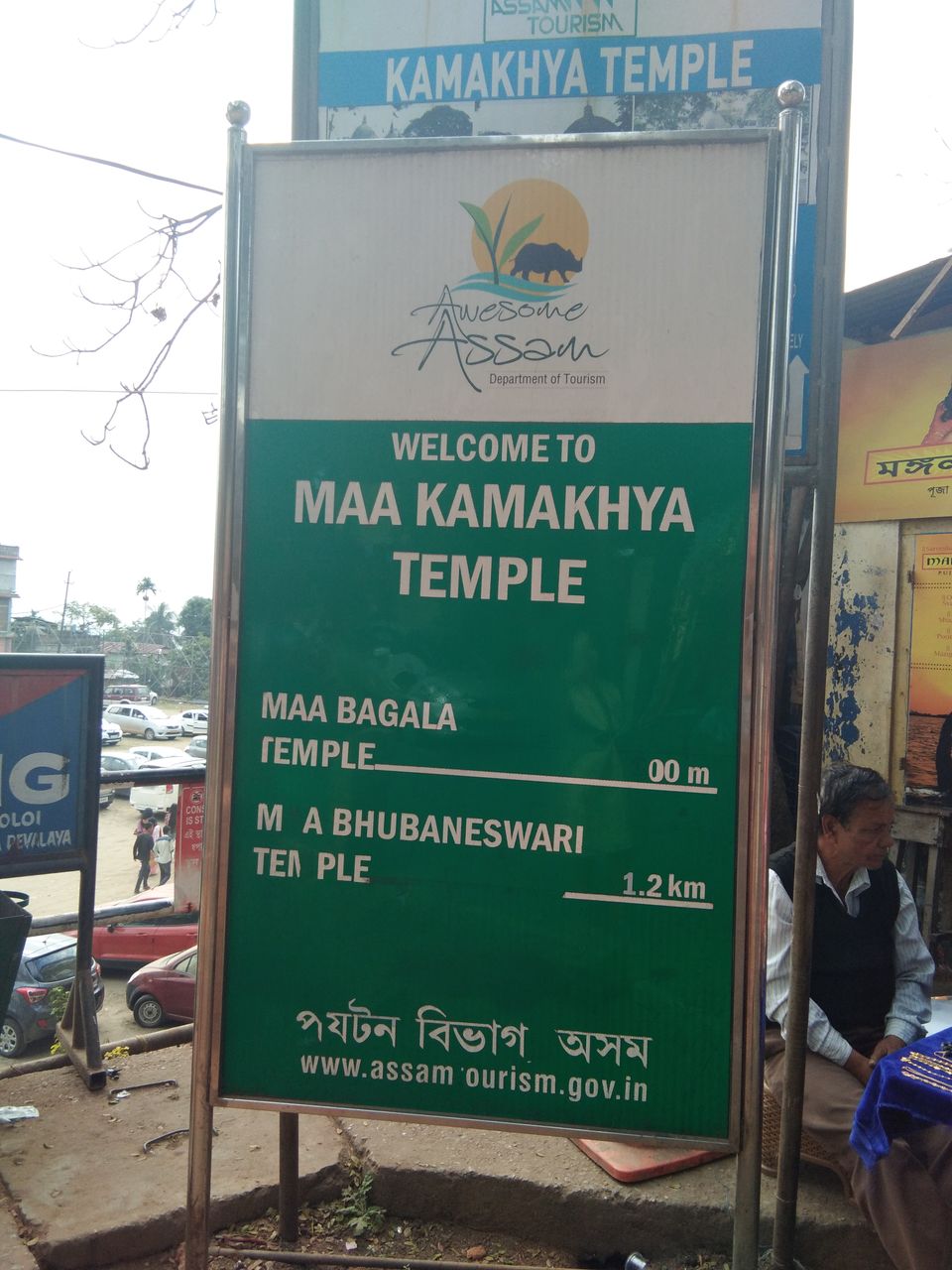 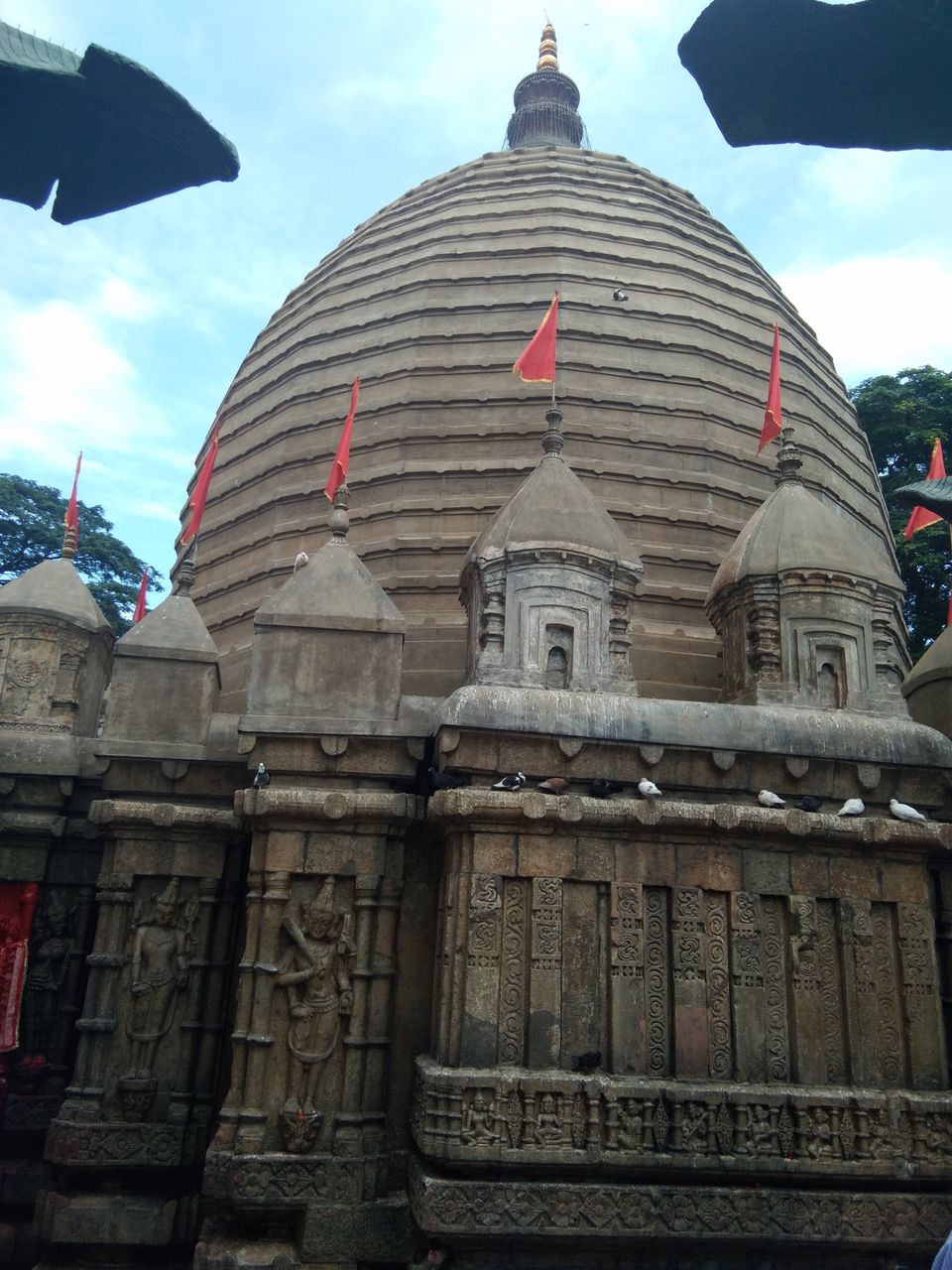 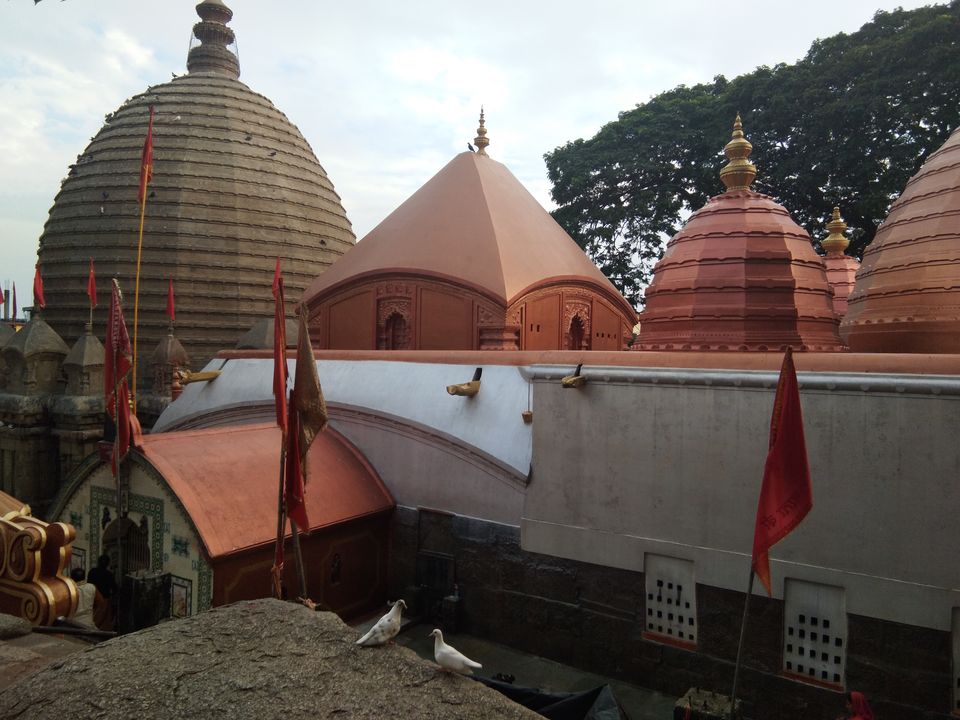 Day 2: On second day we started our day after having lunch, so I called ola share again for the ride to Umananda island. It can be reached from KachariGhat which is opposite Guwahati high court. After reaching the ghat I booked the tickets for ferry which costed us Rs 20/ each for up and down and also the ticket counter person added that the last trip is at 4.30pm so we have to get in to our ferry before that.

As we boarded the ferry we were mesmerized by the beauty of the mighty river Brahmaputra and the picturesque river island which left us speechless with its lush greenery and hillocks. After 10mins ride ferry dropped us near the island and we climbed up the hill through the stairs to reach the top.

Umananda Island is located in Bhasmakuta hilll admist the river Brahmaputra. It is also known as Peacock Island because of its shape which was given by British administration. It is also famous being the smallest river island in the world.

The island is dedicated to Lord Shiva and it is believed that Shiva built this place for the happiness his wife. Uma means Shivai’s wife and Ananda means happiness. It is also believed that Kamadeva was burnt into ashes by the anger of the Lord Shiva in this island. So this hill is also known as Bhasmakuta Hill.

Visiting on Monday is considered to be the holiest day and surprisingly we visited this place on Monday and were lucky enough to get the opportunity to visit this sacred place on Monday. Inside the temple priest gave special attention to all the visitors and did the mantras – chants for the rituals.

It is also considered that offering puja on the day during amavasya brings the highest bliss. Maha Shivratri is the most Hindu festival celebrated at this island. Every year many devotees come from several places to Umananda Island to seek the blessing of Lord Shiva at this auspicious occasion.

After puja while returning back we witnessed some monkeys and learnt that this smallest river island is also a home to golden languor which is considered to be the holy monkey according to the Hindu religion. Visiting to this place will give you a glimpse of this rarest species. 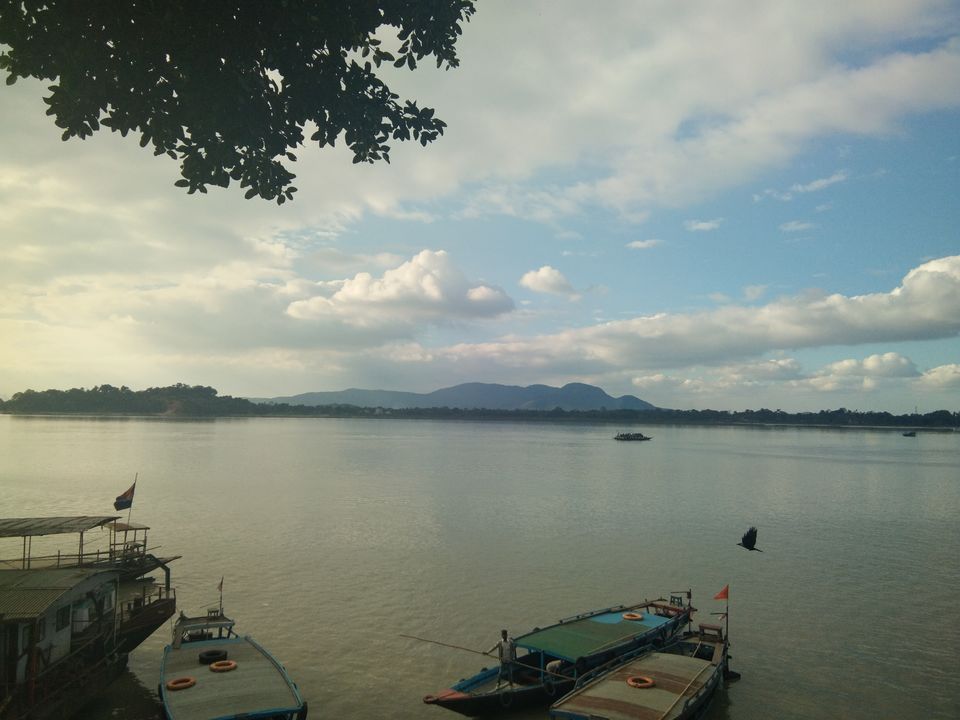 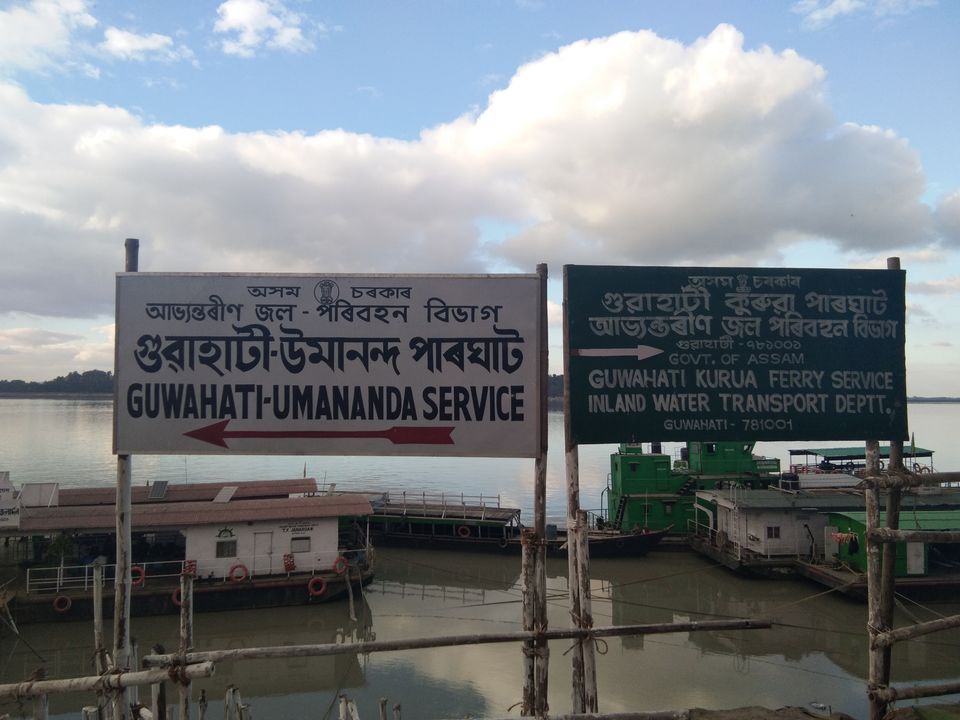 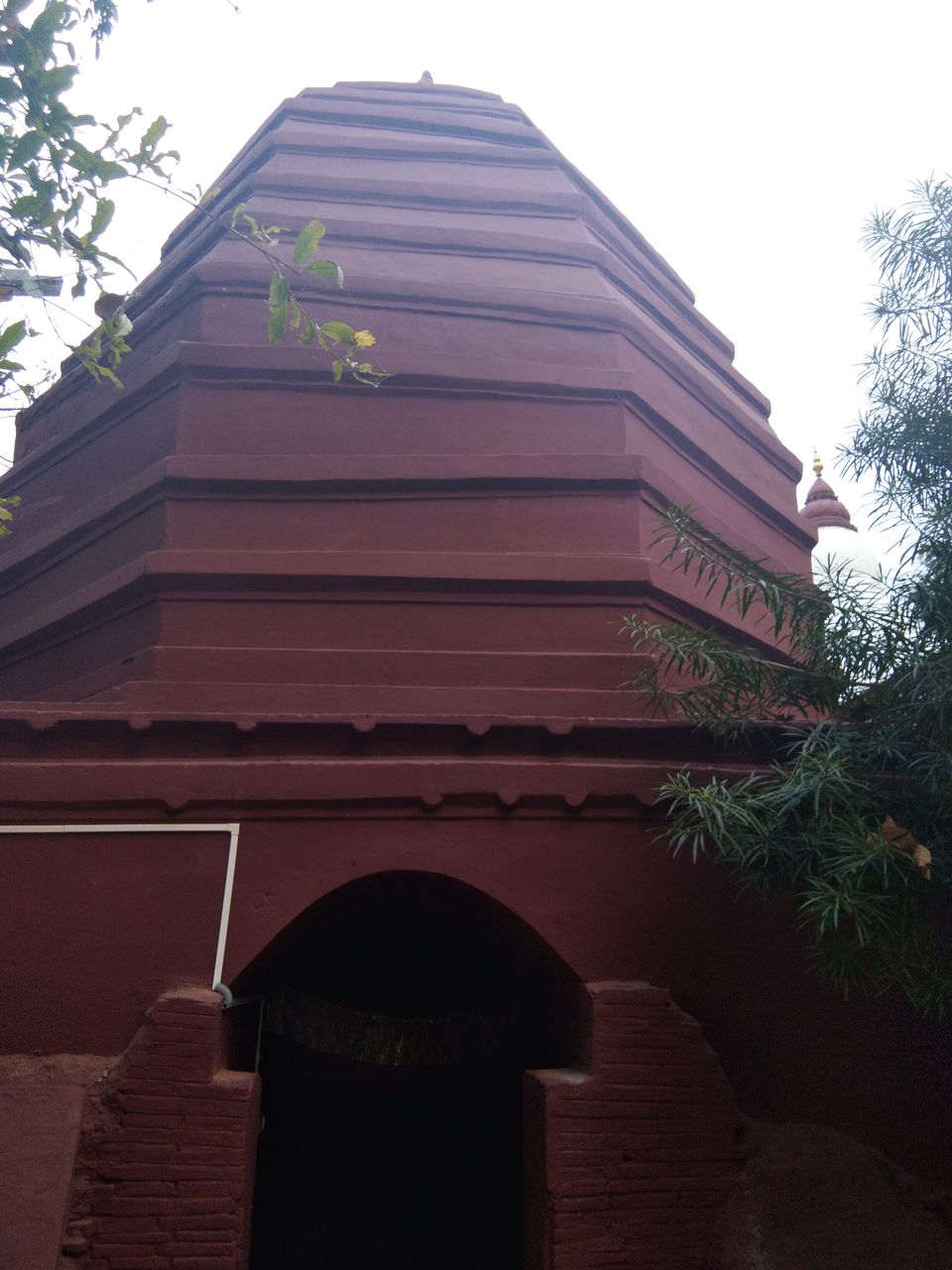 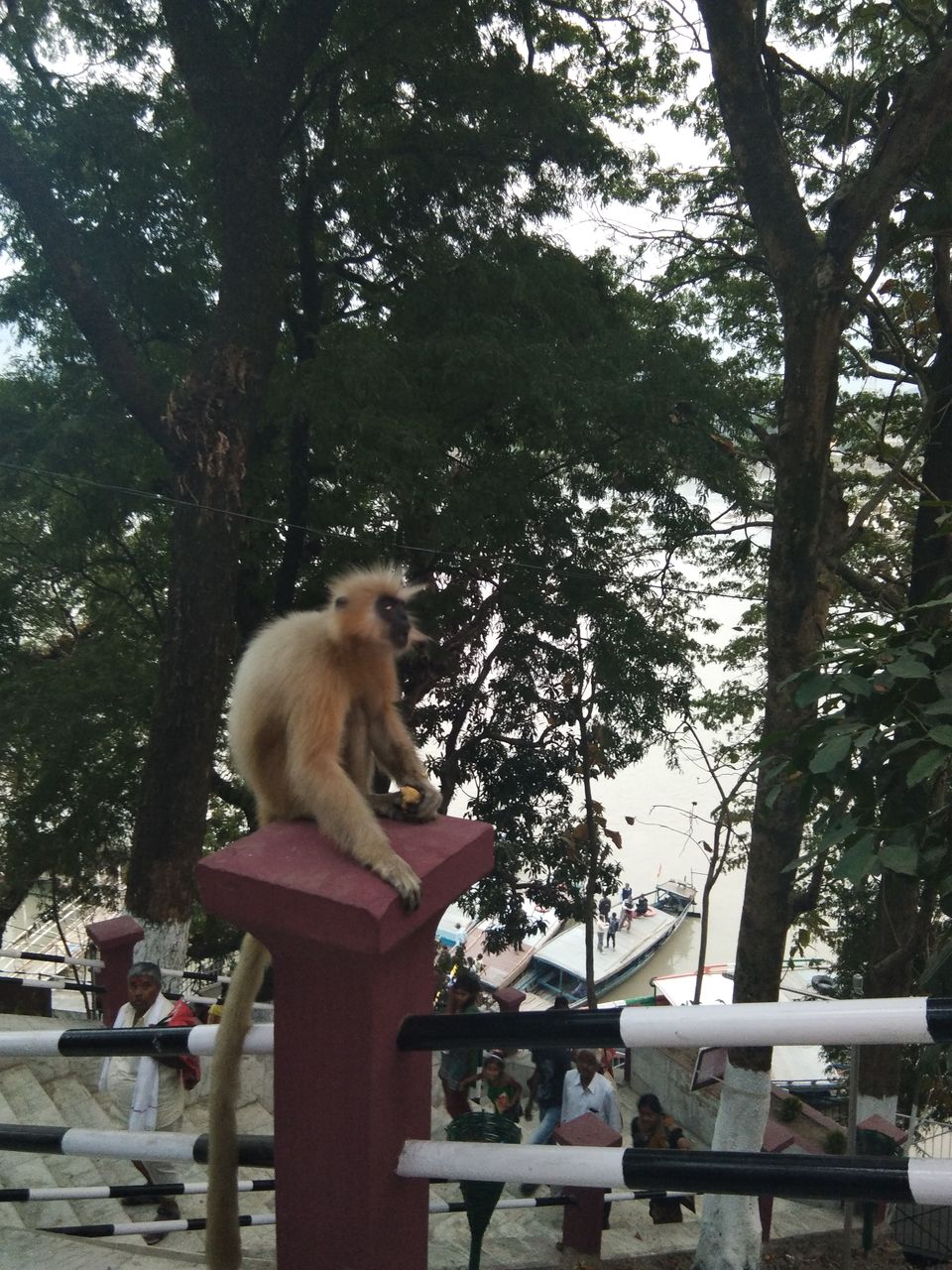