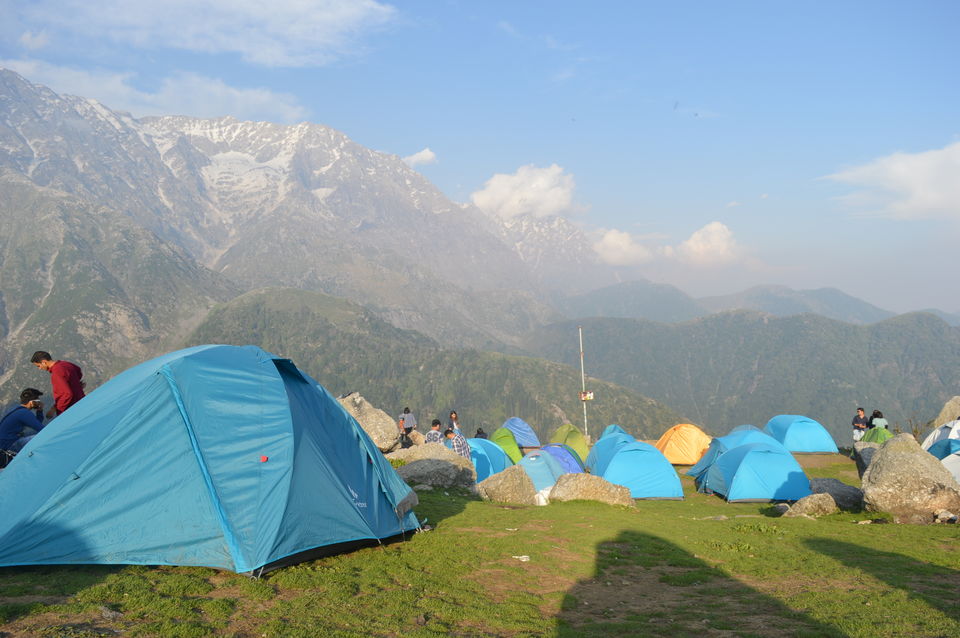 The mountain dimly visible in the soft light of a waning moon, the stars twinkling in a clear sky, distant voices of people chatting filtering in and occasionally a light here and there, signs of people trying to figure out their way in the pitch darkness of the Himalayas. Lying back in my tent and staring at the star strewn sky, trying to figure out the constellations. I was content and at peace. That's how I'll remember Triund for the rest of my life.

Triund has been referred as an easy level trek wherever i have read. However all those enthusiastic people who had been saying the same at the starting of the trek would beg to differ if the same question had been put to them at the last leg of the trek. Haha

Triund trek starts at the Galu Devi temple and takes you to Triund Hill through a meandering trail of 7 km of rhododendron and oak trees.

There are plenty of cafe on the trail and even a very popular one which goes by the name of Magik View and traces its origin to 1984 and incidentally also marks the half way of the trail. It offers an amazing view of the city below and if the weather is clear you can easily see the Cricket Stadium in Dharmashala. From their it's another 3.5km to summit.

While the ascent before the half way mark is easier, the second half becomes steeper, rougher and with more curves on the way. The first leg is an easy incline while the last leg is more demanding on your body. But all the toil is easily forgotten when you first catch a glimpse of Triund Hill. The monotony of uneven grizzly stones of the last mile is suddenly broken by the green hill, a clear blue sky and a white mountain, the mighty Dhauladhar range which forms the outer Himalayan chain, standing sentinel.

The smiles, the high fives and the catcalls are numerous. The ground is specked with small tiny tents some blue, some green. There is just a single stone structure standing which is the guest house and already full to capacity.

For a full experience of the journey, pitching up a tent and being one with nature is highly recommended rather than taking shelter in the Govt guest house. This way you are free to pitch up your tent any where you like. The whole of Triund Hill is yours for the taking.

There are approximately 5-6 cafes on the hill which will serve hot tea, Maggie and other eatables, so food is not such a concern.

We had a lovely chat with one of the Cafe Owners. He had been living in the Cafe for the past 30 years and goes to town only in the winters when the snow is almost 10 feet high and tourism comes to a stop. He also told us about the thunderstorm of the previous night. It had done a lot of damage with many tents been torn. Most of the people had opted out of staying overnight and returned back when the thunderstorm started to get worse. However we were lucky since that day was sunny and no such thunderstorm predictions as such.

From Triund, one can trek further on to the SnowLine Cafe, Indrahar Pass and Lahesh Caves. However the journey after Snowline cafe is much harder, the incline much steeper and also requires some equipment and a guide. Therefore Triund is the popular destination for casual trekking and an attempt further to Lahesh Caves needs much serious approach.

Laying in our tents and just soaking in the environment, trying to figure out the constellations and failing gloriously. Darkness here is soothing and makes you feel safe and happy. It was the experience of a lifetime. Slowly sleep claimed us with a smile on our faces, snuggling in our sleeping bags with the assurance to each other that we will wake up early to see the sunrise.

The returning journey was much better since it needed much less effort and also the weather was far better. It was also a cloudy day and at some places we literally were walking in the clouds with minimal visibility.

The descent slowly took us back to civilization with a promise to come back again and trek further on to Indrahar Pass and Lahesh Caves.