Agra Travel GuideAgra TripsTaj Mahal Is A Symbol Of Love Or Reflection Of Pain?

Taj Mahal is a Symbol of Love or Reflection of Pain? 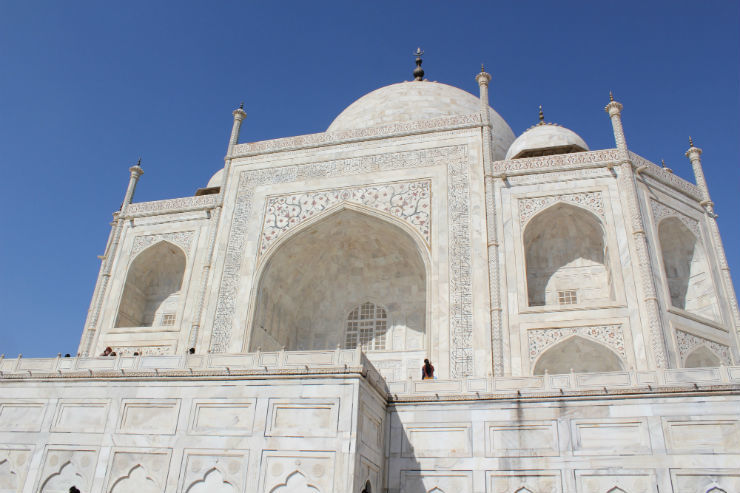 The very first time I had been to Taj Mahal was when I was kid. Then I was just under 5 years old and I had no idea about the symbol of love or the architectural magnitude. All I knew then was a long train journey with my parents and eating a lot of sweets. In last 35 years things got changed, and so my thought process.

This time I was in Delhi to attend a tourism event. I had 5 days in hand, but the event was only for 2 days. I thought of spending my time meagerly, and invested a bit of money in Delhi Tourism Corporation's Golden Triangle Tour.

The tour started off from Delhi to Jaipur (What are the places to visit in Jaipur in one day?) and then through Fatehpur Sikri to Agra. We entered Agra by around 7:00 in the evening and the historical city was jam-packed with cycle rickshaws, scooters, bikes, cars, and vans.

We were given a decent accommodation in a hotel somewhere around 2 to 3 kilometers away from the renowned Taj Mahal. We slept comfortably and woke-up early in the morning to catch the rising sun at Taj Mahal before anyone. That's true, you need to reach the venue before time as on some days the place can be extremely populated even to get a chance to grab your tickets.

Our friendly guide, Atul Pandey from Delhi tourism, helped us to earn of tickets shoe wraps and provided us with interesting facts about Taj Mahal. I was awestruck by the sight of that gigantic mausoleum, but the video did not stop capturing the sight.

Taj Mahal that was built by Shah Jahan in the memory of his beloved queen Mumtaz Mahal. The beauty that inspired the Mughal Emperor throughout his life left the eternal world during the birth of her fourteenth child. The story says that during her death bed she took a pledge from the emperor to build something unique after her name, and that's the reason for the construction of this World's Wonder.

The story is not ending here. The demise of his beloved queen put the emperor in tremendous grief that he was on a sequestered mourning for a year. However, the body of Empress Mumtaz was buried temporarily at Burhanpur in an enclosed garden known as Zainabad on the bank of river Tapti.

It was Jahanara Begum, the daughter of Mumtaz and Shah Jahan, who brought her father out of grief. Back to his normal life, the emperor began his plans for a mausoleum in Agra on the bank of River Yamuna. It took 22 years for the construction to complete, and we now get to see the abiding love of the Mughal emperor for his beloved queen.

Of course, there are stories about the architect being blinded or his hands being chopped. Yet, people forget about those pains as they see the captivating beauty of Taj Mahal.

"Not a piece of architecture, as other buildings are, but the proud passion of an emperor's love wrought in living stones." ~ Sir Edwin Arnold