A trip to the Copper Canyons, Mexico

So, traveling to the Mexican state of Chihuahua and traveling through the Copper Canyons was high on my list of things to do while living in Mexico. We began our trip with a six-hour or so drive from Mazatlán to El Fuerte, in the northern part of our state of Sinaloa.

HotelsMap
El Fuerte, in the northern part of our state of Sinaloa. El Fuerte is a beautiful little town with a large fort rising over it; thus, the name. The fort was originally built in 1610 by the Spaniards to ward off the natives. It has cobblestone streets, gorgeous mansions from the gold and silver mining days, and a central Plaza de Armas. The plaza is home to a beautiful church, Sagrado Corazón de Jesús, built 1760-1804, as well as Los Portales and the Casa de las Culturas. We enjoyed walking around town, and there is a lovely lagoon as well. We stayed in a very spacious, comfortable and affordable room at Hotel El Fuerte, a gorgeous 300 year old hacienda. We ate dinner (comida or lunch) in a small family-owned restaurant, and had cocktails during “El Zorro Happy Hour” at the Posada del Hidalgo. It is supposedly where Don Diego de la Vega, or El Zorro, was born. The pool area was beautiful, but the event was too campy for our tastes. We did enjoy domino time at our poolside table afterwards, margaritas at hand. Any trip through Barranca del Cobre involves a ride on the incredible Chihuahua al Pacífico steam train, nicknamed “El Chepe.” The railroadpasses through 86 tunnels and 37 bridges in its 408 mile (650 km) journeyto Chihuahua City. We bought first class tickets, because we wanted to be sure we would be comfortable, and it included the dining car. For the price it seemed well worth it, but we never really saw what economy class looked like, so we can’t comment on it. The train had comfortable seating, a terrific dining car, and a bar area with tables on which to play cards or games. Standing between the cars to better look up at the mountains and down into the canyons was pretty exciting, too. 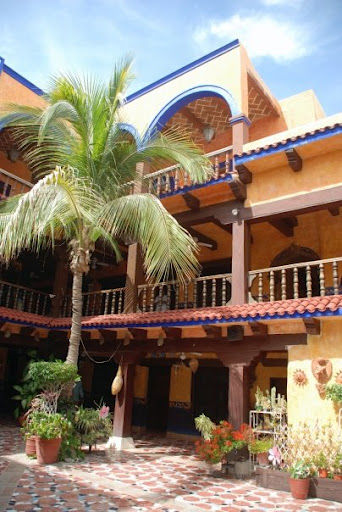 HotelsMap
From the station the hotel van picked us up for a 35-minute ride to Cerocahuí, a small town with a Jesuit Mission founded in 1694. Cerocahuí is the gateway to the Urique Canyon and a beautiful overlook, Cerro del Gallego. It is a very small town. We stayed at Hotel El Misión. It’s also a beautiful old hotel, right on the central plaza across from the cathedral. It is laid out around a central courtyard, and the rooms have beamed (viga) ceilings. After a quick walk around the grounds and vineyard, we walked around the town plaza, which was filled with booths for the Semana Santa town fair: food stands, game stands, and people selling everything from CDs to kitchen items.Welearned that what we call “tostilocos” in Mazatlán are “dorinachos” in Cerocahuí (a bag of tortillas chips with goodies on top). We had heard and read that the Tarahumara are a very closed and private people. I will say that our experience was that many if not most of them were shy, but they were by and large extremely friendly and welcoming. Most readily agreed to my photographs, and were happy to explain to me a bit of what was going on around us. I loved their clothing and was excited for the opportunity to view some of their ceremonies and dances. During our stay in Cerocahuí we did two hikes with Juan, and greatly enjoyed both of them. We had made arrangement with a local guide, Juan, to take us on a hike. He took us up to Lion’s Head rock. The view down on the village from up there was beautiful, and it was fun to get out and see how people farmed in this barren terrain. The houses were so simple, and there was quite a bit of livestock as well. 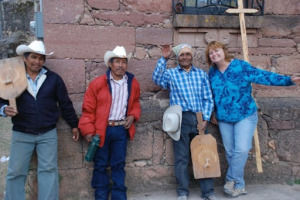 HotelsMap
Saturday afternoon we took a ride out to Cerro del Gallego. We were told we were going down into Urique Canyon, and were a bit disappointed that we only went to the lookout point rather than down to the river. But, the views of the canyon were indeed incredible, and we very much enjoyed meeting several women there who were selling handicraft items. Danny especially liked a toy snake made out of acorn caps strung together, with a painted wooden head—a toy snake that now resides on our front table. 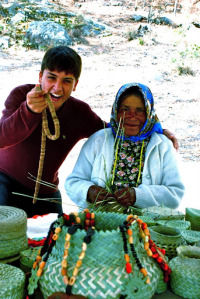 HotelsMap
We left Cerocahuí by van the next morning, after another hike with Juan, to catch the train from Bahuichivo at 12:39. At 1:40 we got off the train in Posada Barrancas, Copper Canyon, the highest point on our journey. There was a LOT of action here, a large market of crafts sellers and incredibly wonderful looking street food! We were so excited. We were picked up at the train station and taken to our hotel, Mansión Tarahumara “El Castillo.” Again we were extremely pleased with our lodging choice. Our room was at the very, very tippy top of the hotel site, right on the rim of the Copper Canyon. There is a trail that leads right from the hotel along the canyon wall. It passes several cave homes as well as freestanding homes of the Rarámuri (Tarahumara). We saw a chicken coop on stilts, literally hanging over the edge of the canyon. We saw snake skin hanging on a clothesline to dry in the sun. Residents hike miles down into the canyon to farm, only to trudge miles back up the canyon walls to come home at dusk. It definitely reminded me of the Hopi lifestyle near where I grew up, except much, much poorer. We spent time visiting handicraft vendors, because they were all dressed so colorfully and their wares were so fascinating. Loads of flutes, violins, and hand drums. Music is obviously important. Pottery and baskets. Weavings and shawls—at this elevation you definitely need a shawl. Monday morning we had booked a tour through the hotel. They took us quite a few places, including “Balance Rock,” a huge boulder that looks to be verrrry precariously balanced on the edge of a mile-plus drop off to the canyon floor. 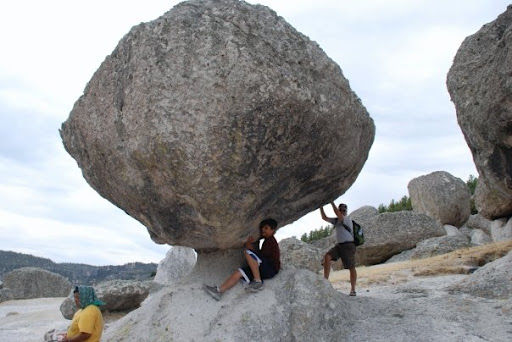 HotelsMap
Creel is on flat ground, though surrounded by some hills and Lake Arareco. And it is much more of a city than what we had seen thus far. It felt to me like a Wild West town, with saloons and such. We spent two nights here at the Best Western Lodge and Spa. On Tuesday we rented bicycles and set off to see Lake Arareco and the Frog Rocks. The hotel gave us a wonderful map of the area, which seemed very easy to follow. Except, we got lost :) No big deal, as we just pedaled farther than planned. We had a blast! It felt so good to ride—perfect weather. We had a picnic at the Mushroom Rocks, sitting up top one of the larger outcroppings. It was pretty fun when a vanload of Mexican tourists stopped to take photos and there were the gringos perched up top of one of the rocks, eating lunch! We rode past cows, saw a huge cave home, saw lots of laundry hanging along fencelines, and ate a lot of dust. At some point during our stay in Creel we also visited the museum, which is located on the railroad tracks downtown. It was small and simple, but we very much enjoyed the Rarámuri displays, and the short explanations of various aspects of Rarámuri lifestyle and culture. The last leg of our journey was the drive back home. Our car was retreived, safely and soundly, from the parking area in the back of the hotel, and off we went! We had enjoyed a most terrific journey. Despite all that pleasure, it was still a thrill to come around the curve on Highway 15 and get our first glimpse of the Pacific Ocean again, indicating that we were almost home. 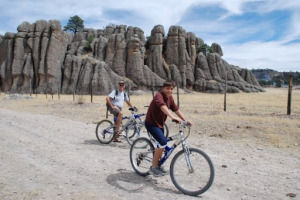 HotelsMap
Something we’d like you to know about food and lodging in Copper Canyons: in our experience, there are very few dining options in most of the towns in the canyon. With the exception of El Fuerte and Creel, all the hotels on our itinerary included three meals a day in the price of the room. When we went hiking or on a trek, the hotel was happy to send a picnic lunch. There are two things to know about this. First, they do this because there really are no other dining options in the towns. Second, you will be eating in groups, mostly with tour groups, and have maybe two choices for your meal. The food was good, you just need to be ready to eat when they say eat and not be craving something special. 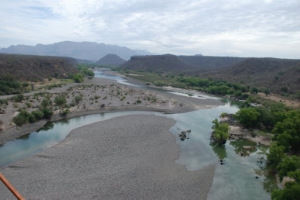