Creepiest Statues From Around the World

Sometimes art is beautiful. It fills us up with hope, joy and love for life and all its wonder. But other times, art can be terrifying. I’m not talking about modern art that you can’t wrap your head around (although, that’s also horrifying in its own way). 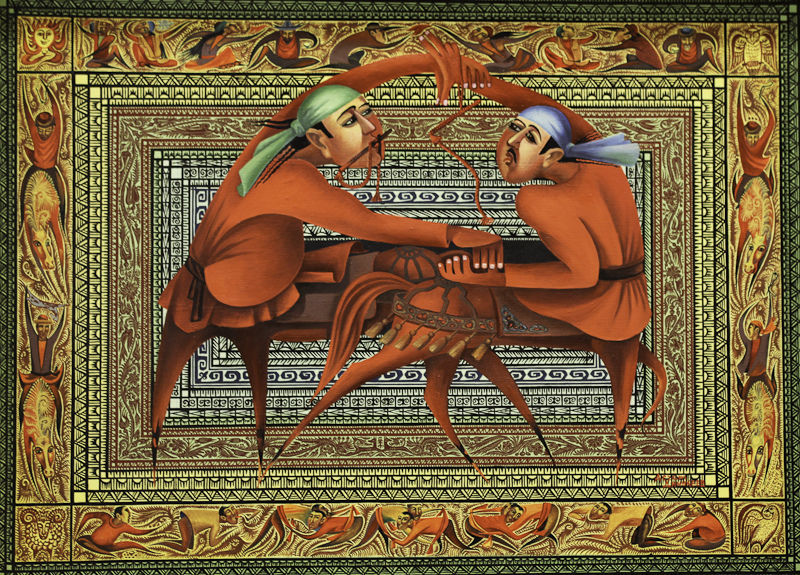 Can somebody tell me what this is supposed to be? Because I don’t get it.

I’m talking about artists who’ve made it their moral responsibility to scare the living daylights out of us. These are some of the creepiest statues from around the world and I would not like to meet them at night:

Giant babies who want to steal your soul

Ever wondered what a giant baby would look like with its face kicked in? Well, no need to wrack your brain because David Cerny has delivered! These statues have been placed in Kampa Park in Prague. Oh, and the cherry on top of the creepy cake is that not only are these bronze alien babies shown crawling in the park (and maybe in your nightmares), they can also be seen scaling the Zizkov TV Tower. Sweet dreams! 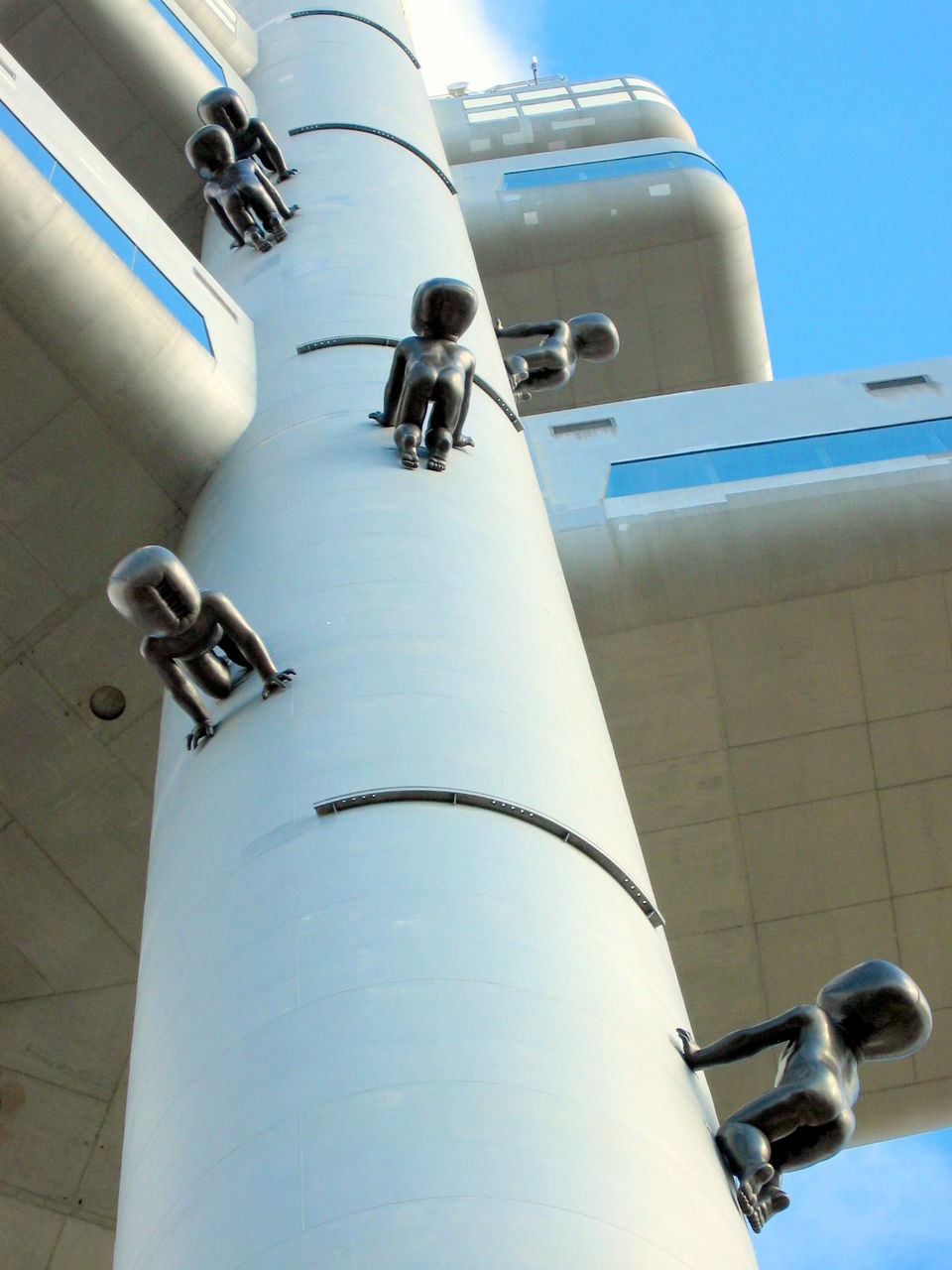 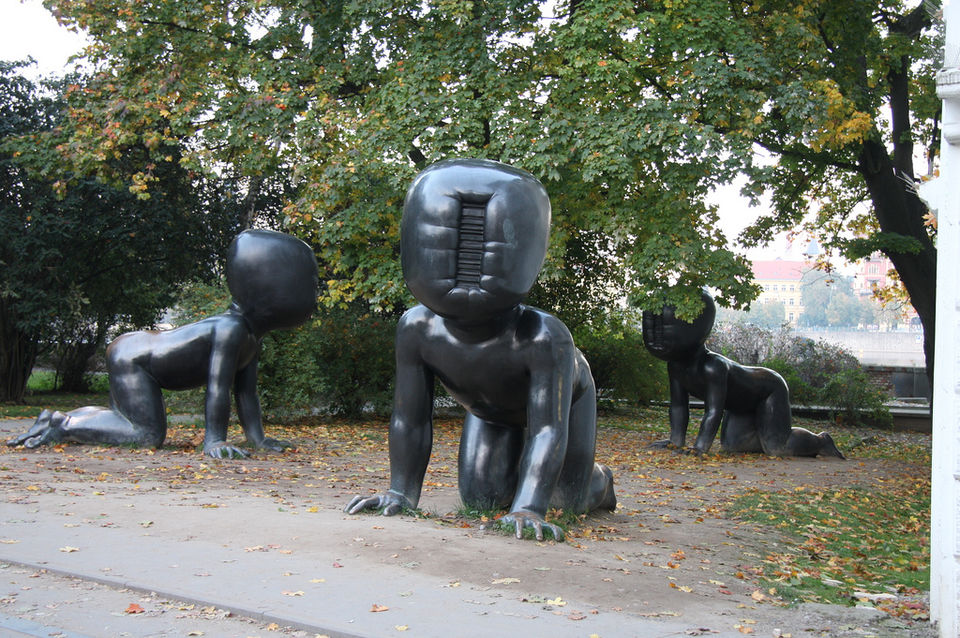 Well, at least it can’t see us.

If you’re scared of spiders, I’m warning you right now; don’t look at the picture. Already did? Well, it’s not going to crawl out of your screen and try to eat you! Probably. This sculpture is at the Guggenheim Museum in Bilbao and has been lovingly named Maman. It’s 9 meters tall, so a perfectly fine size for your regular nightmare-inducing spider from hell. It’s been sculpted by an artist called Louise Bourgeois and she’s used all kinds of things to make it: wood, latex, marble, bronze, fabric, fear and loathing. If you’re ever visiting Guggenheim, make sure that you run away from this exhibit as fast as your tiny human legs can take you because…well…look at it! 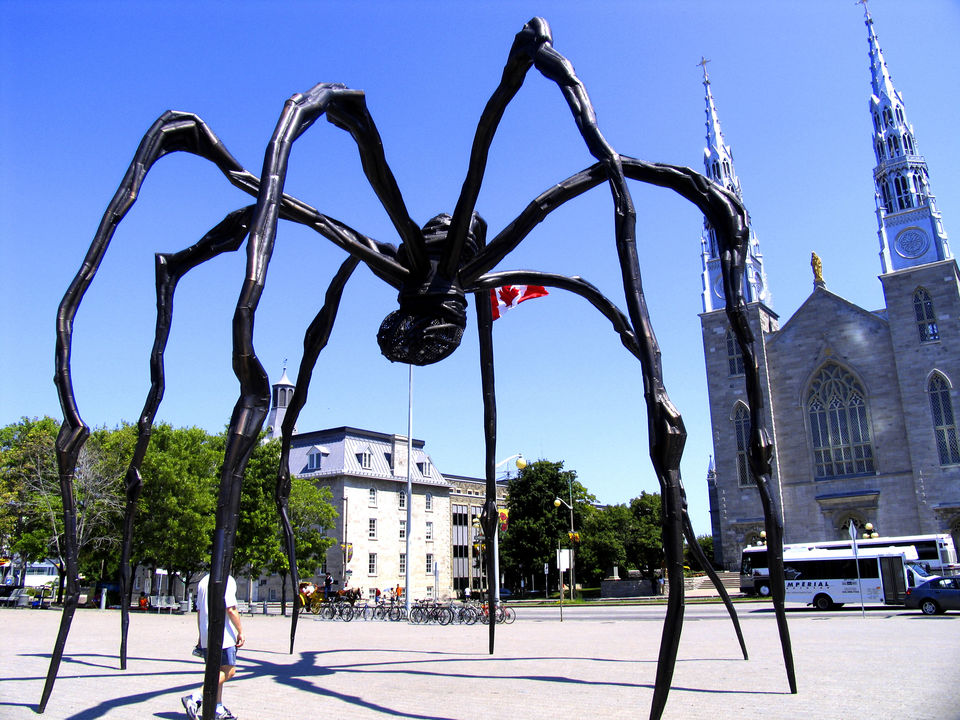 “The next time you chase a small spider with your sandal, I’ll be watching you.”

Dementors casually sitting in a church

If you haven’t read Harry Potter yet, or don’t plan to (and for those who are still awaiting your Hogwarts letters, here’s a fellow fan saying hello!), let me tell you what they are. Dementors are dark creatures that feed on human happiness and have the power to suck your soul out with a kiss. They look like they can do it too: 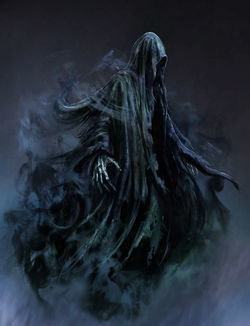 Now, these statues at the St. George’s Church in Luková, Czech Republic, look eerily familiar, don’t you think? Just casually waiting there to pounce on you. This church was abandoned in the 1960s (Gee, I wonder why!) and then came along artist Jakub Hadrava to “restore” it by placing these wonderful statues to represent the ghosts of Sudeten Germans who lived here before World War Two and were at this church every Sunday. I’m pretty sure if you’re not religious now, you will be after visiting this creepy church! 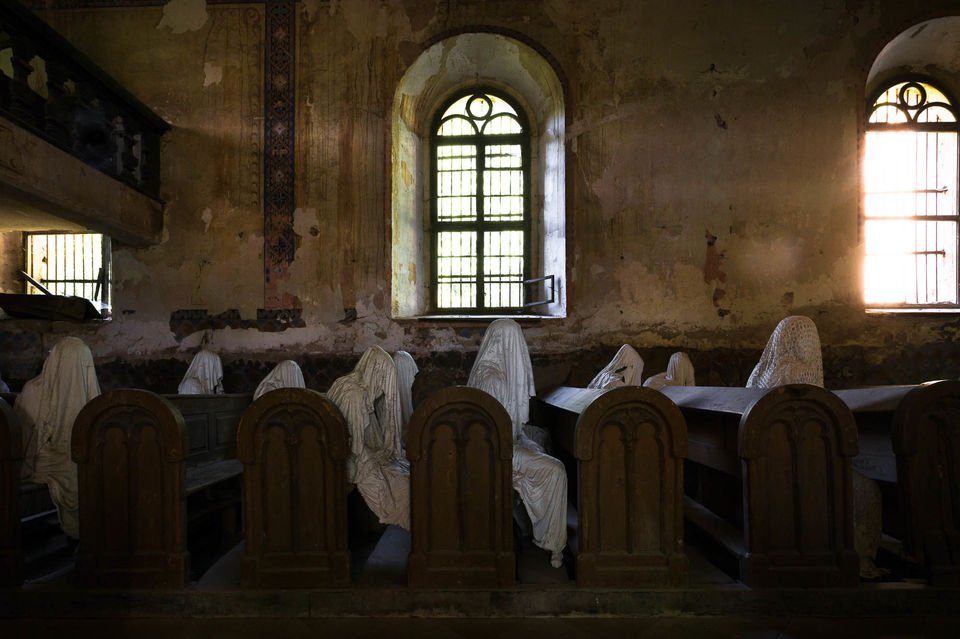 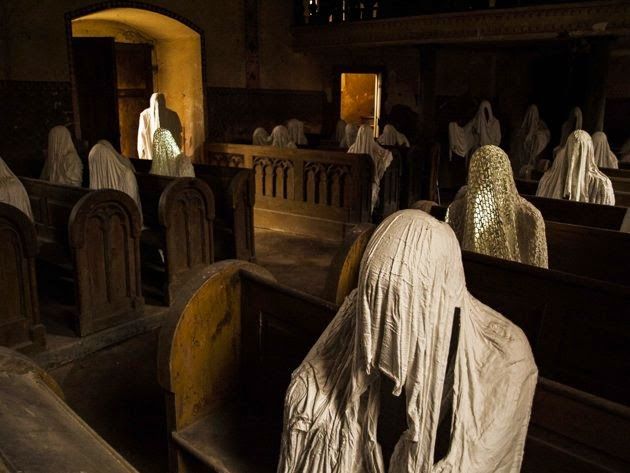 “Oh, what a fine evening to creep the ‘hell’ out of everyone.”

This statue in Bern, Switzerland is called the Kindlifresserbrunnen, and that’s German for Child Eater Fountain. No, you did not read that wrong; I did write “child eater” fountain. I’ll let that sink in for a minute. It depicts an ogre devouring naked, helpless babies. It was created way back in 1545 or 46 by a man called Hans Gieng who probably wanted to tell the world that he did not like children all that much. I think the festive colors that the sculptor has used to make this masterpiece makes it all that more disturbing! The expression on the babies’ faces also do not help. 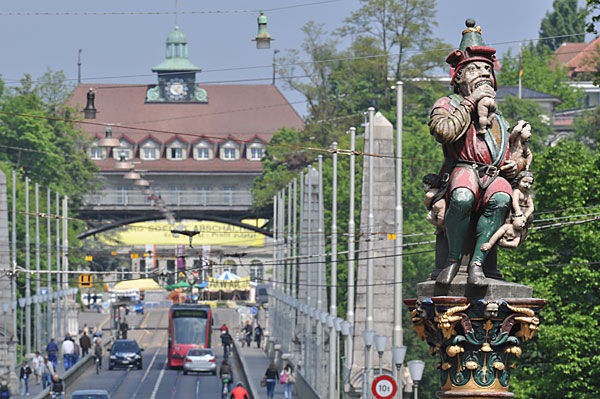 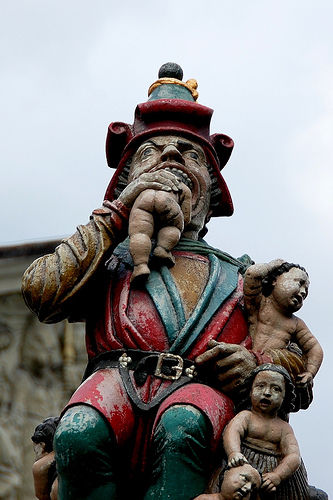 This is what happens to you when you’re on Santa’s naughty list, kids!

There’s a 70 foot statue of a giant embedded in the earth, trying desperately to free himself, in Maryland, USA, and it’s freaky as hell. If you don’t think so, take a close look at his expression. It’s called The Awakening, and it actually does look like an angry giant has been “awakened” from his sleep by a frightening noise or something. I wonder what kind of noise would scare a goddamn giant out of his wits. Whatever it is, here’s praying it’s way, way underneath the guy. 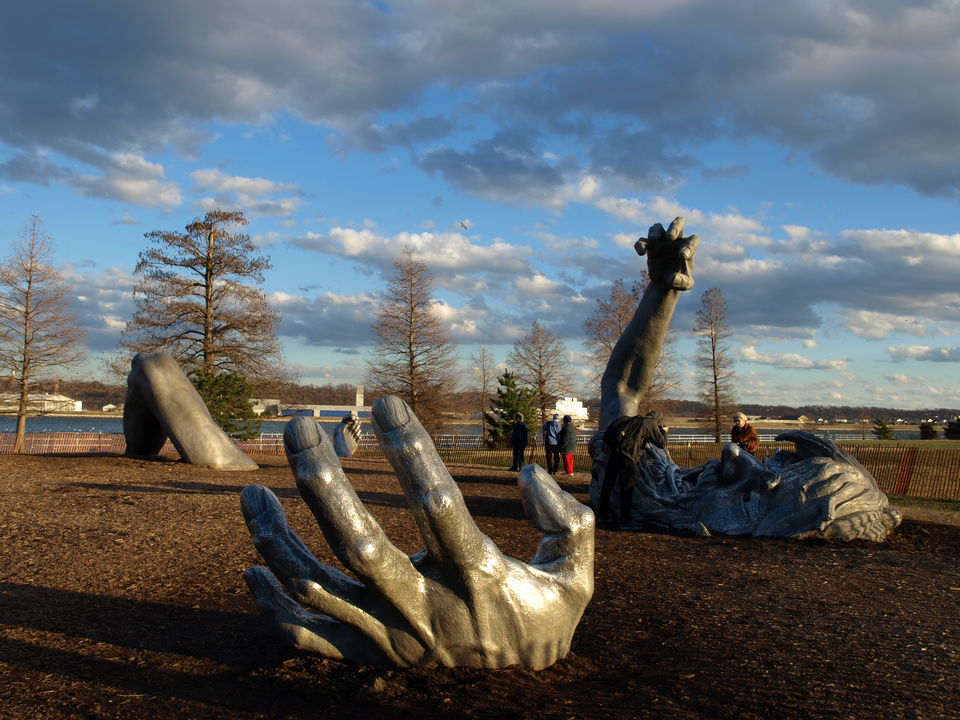 Visiting a church is often a peaceful experience. You say hello to god, you say sorry about the bad things you’ve done, you feel better about yourself and then you leave. But what happens when a statue of a rotting body is on display? Well, I’d run, wouldn’t you? It’s called Transi de Rene de Chalon and it’s on display at the Saint-Étienne church in Bar-le-Duc, France. It’s supposed to depict a 16th century prince called René de Chalon, but he must have not been in very good shape when the sculptor Ligier Richier, a pupil of Michelangelo, decided to immortalize him. If you look closely, the zombie is holding something up. It used to be the prince’s actual heart (dried and contained in a heart-shaped reliquary) but someone stole that during the French Revolution. Fancy that. The thief must have been quite heartless! 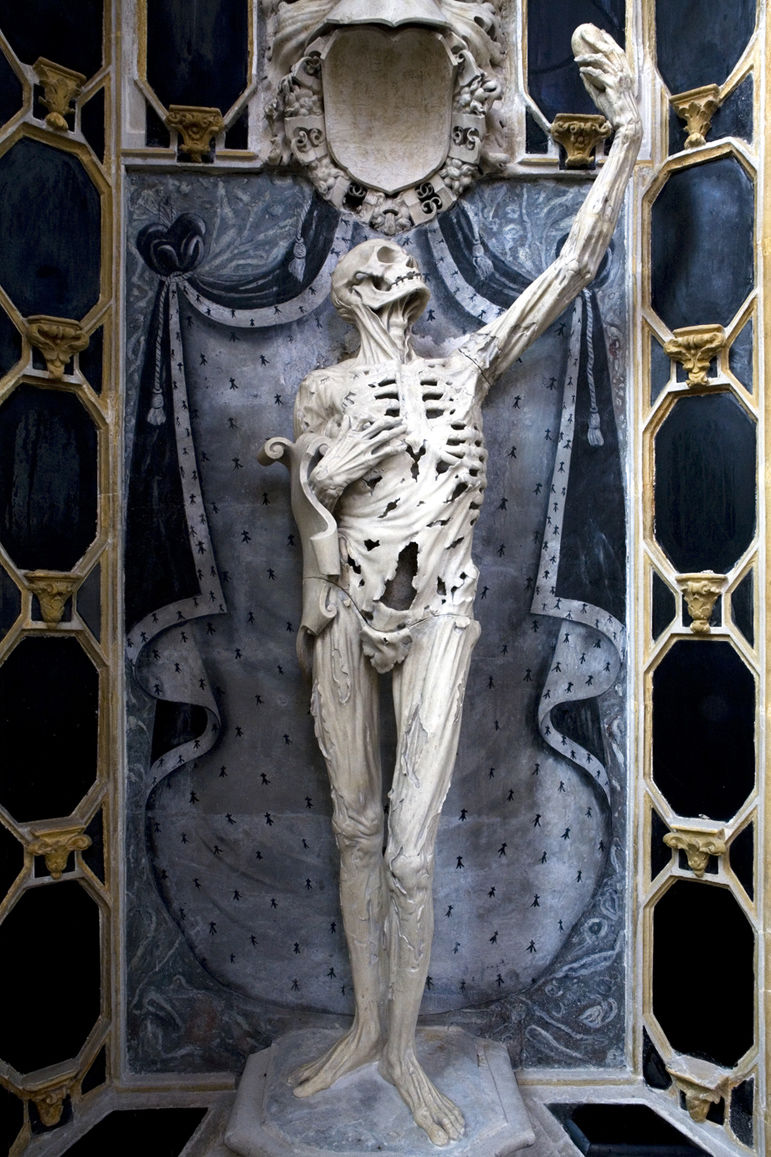 “But first, lemme take a selfie!”

Well, it’s not a statue. It’s a mannequin. But I thought it deserved a spot on this list because it’s earned it!

This mannequin called La Pascualita was first installed in 1930 at a wedding gown shop in Chihuahua, Mexico, and looked pretty elegant in the beginning. All that changed when people started noticing its uncanny resemblance to the shop owner’s daughter, Pascuala Esparza, who had died on her wedding day after being bitten by a black widow spider. Legend says that this isn’t a mannequin at all. It is the perfectly preserved body of the owner’s daughter. If that isn’t creepy enough, some people say that her eyes follow them around the store. She’s also believed to move around and change her position at night. Although, many have rubbished the rumor that the mannequin is an embalmed corpse, locals (and many tourists) refuse to believe explanations as her features are way too realistic. As if wedding shopping wasn’t stressful enough, now you’ve got probable mummified brides in the mix! 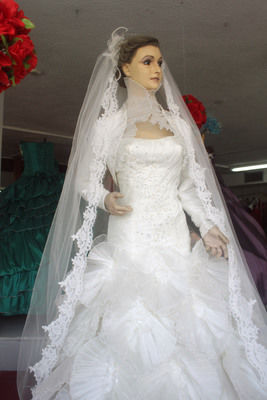 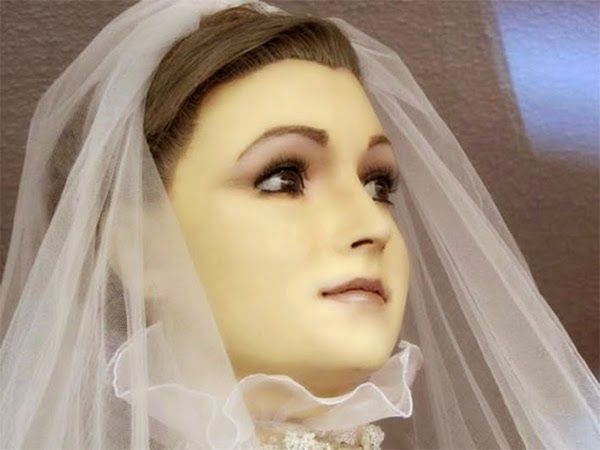 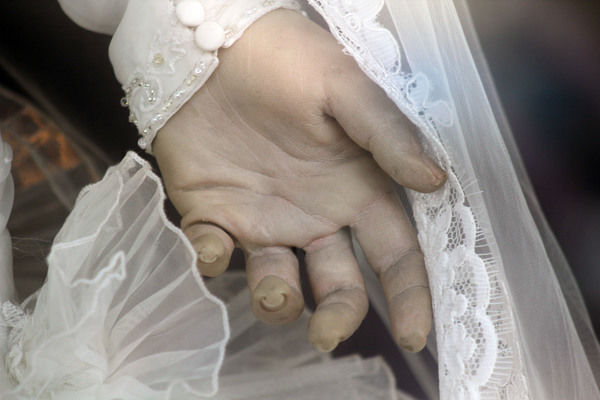