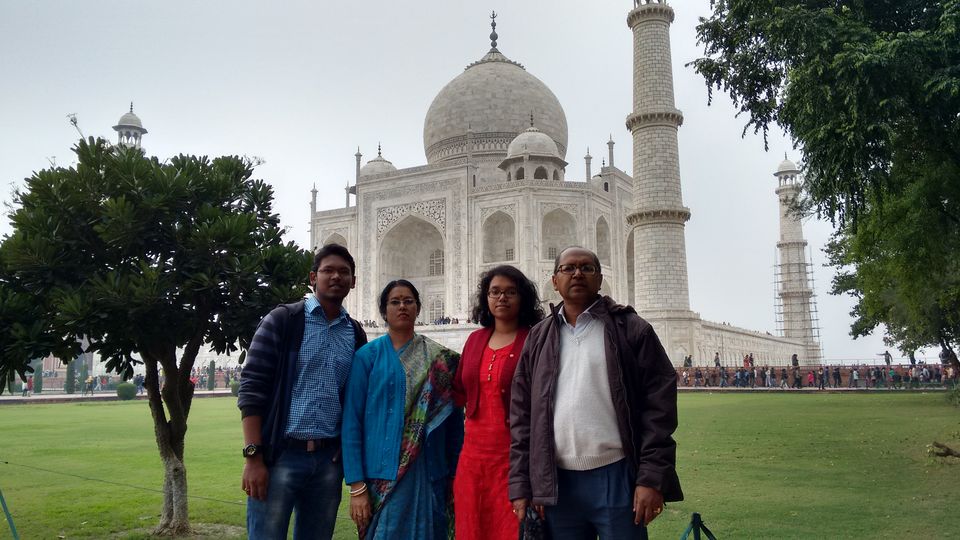 Because we support Yamuna Action Plan! (notice the white cloth covering on shoes 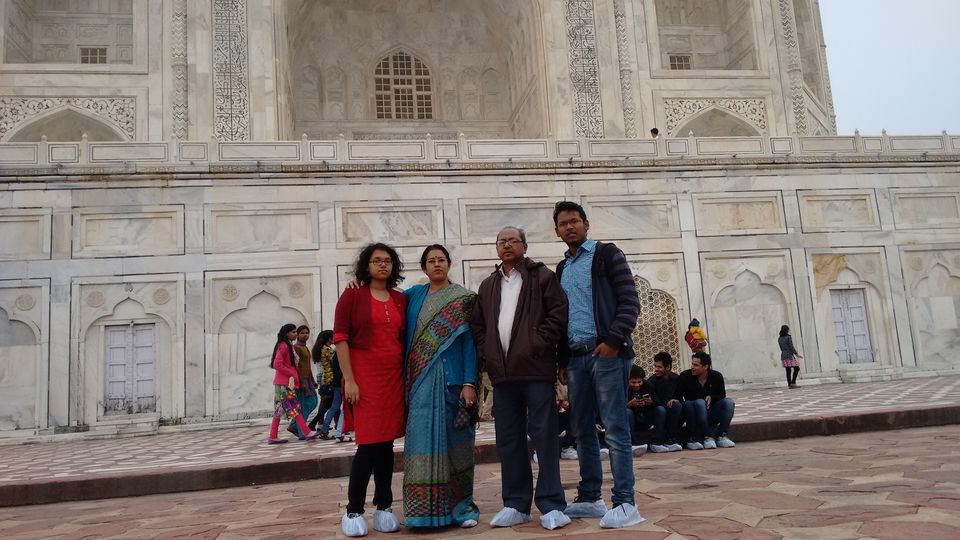 See the 4th line from top, in the central line vertically. "The mastermind of th 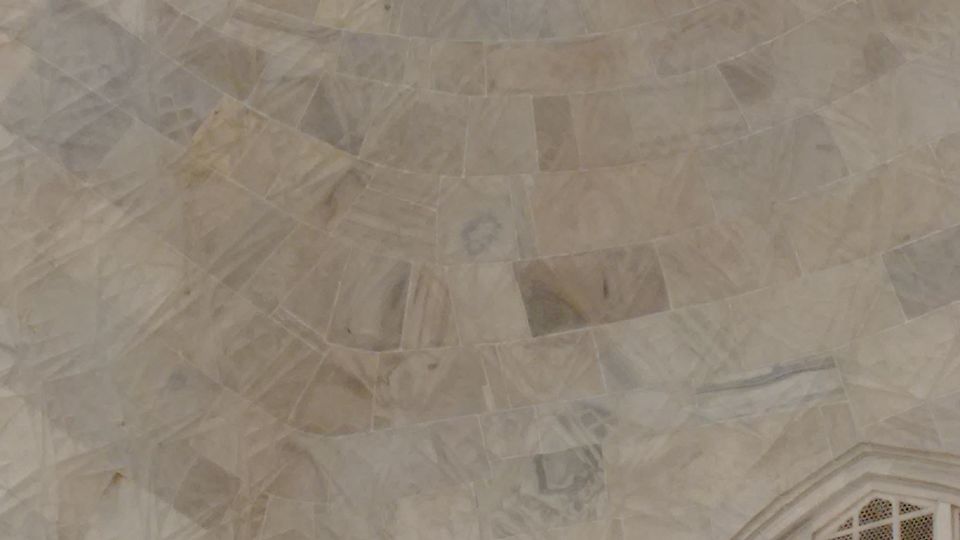 Intelligently Calligraphed Quran writings! From below, one can read them as if t 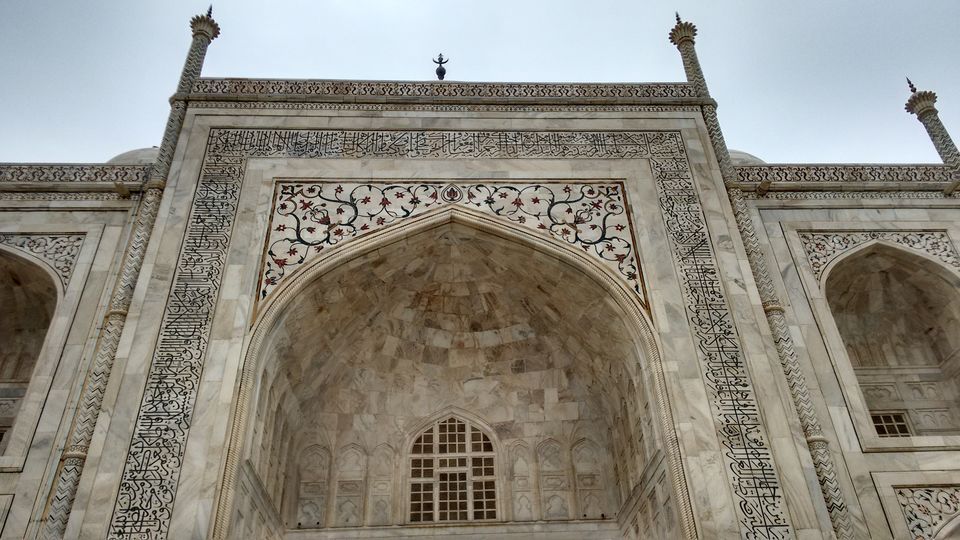 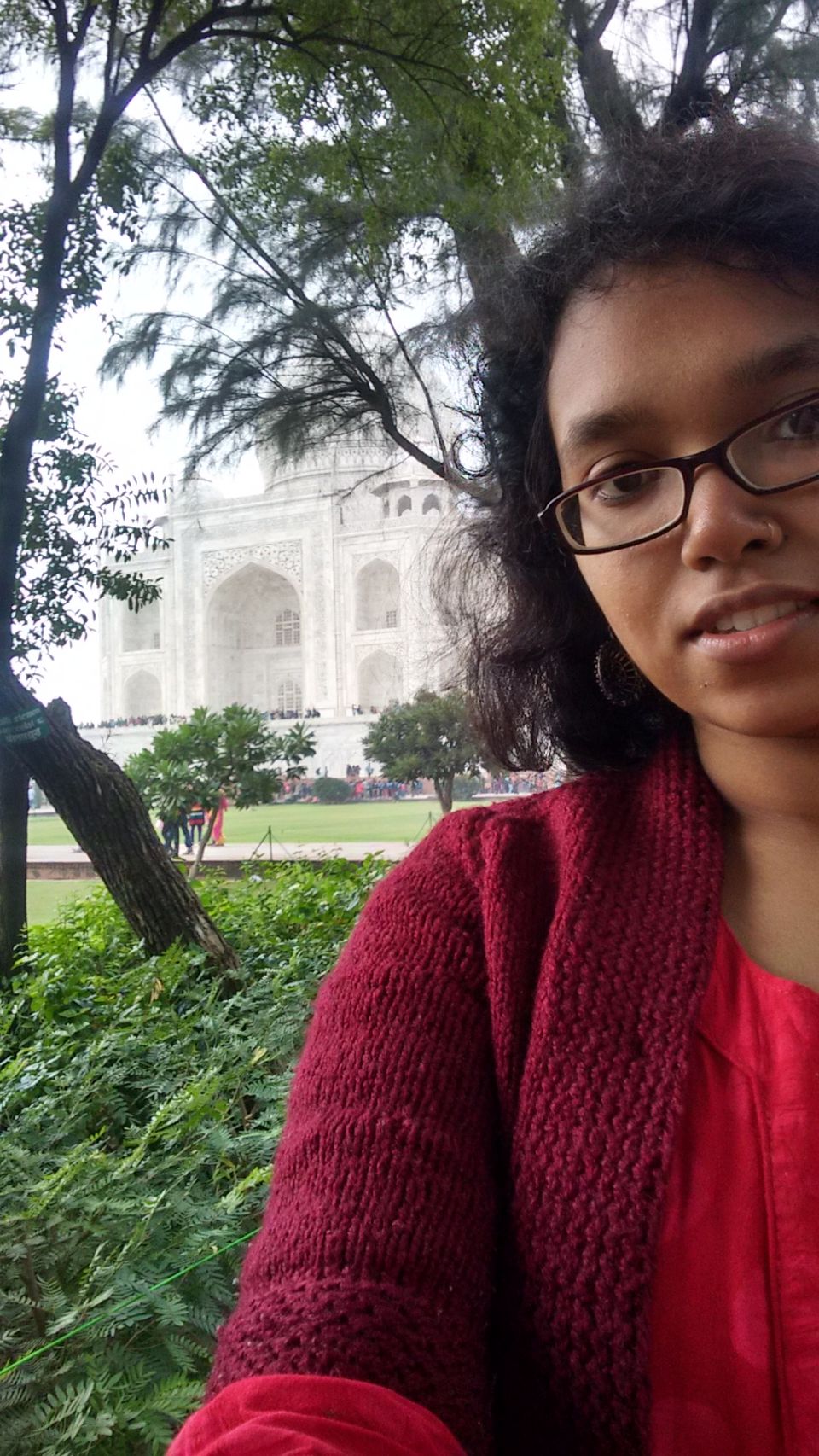 22 domes for the building time of 22 years.. The entrance. 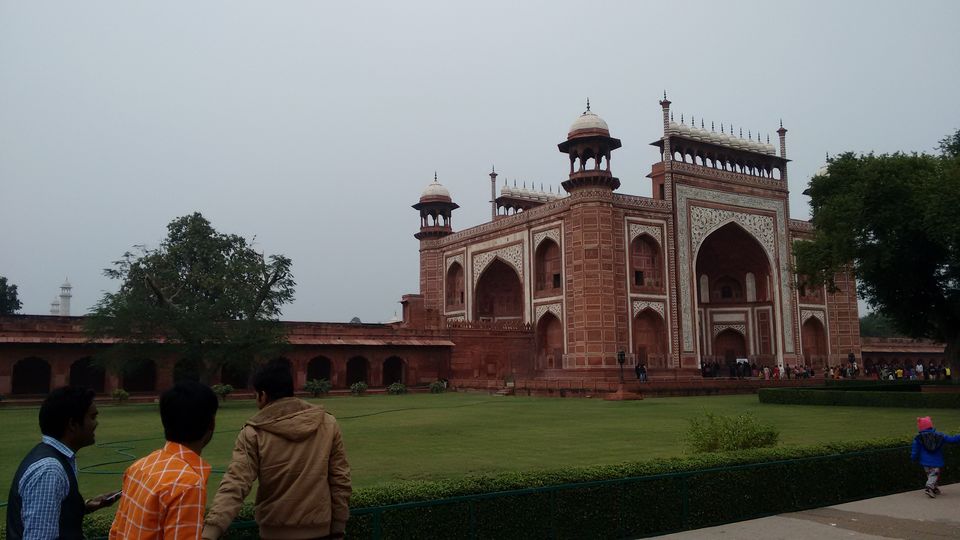 "The flowers, and the writings everything are precious gemstones, not colors" 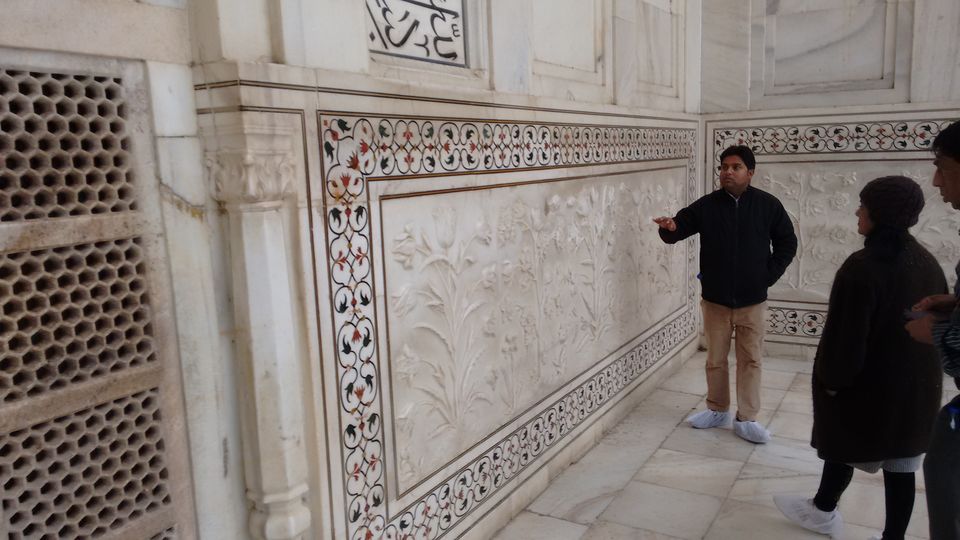 One of the two alike red sandstone structures on the two sides of Taj. 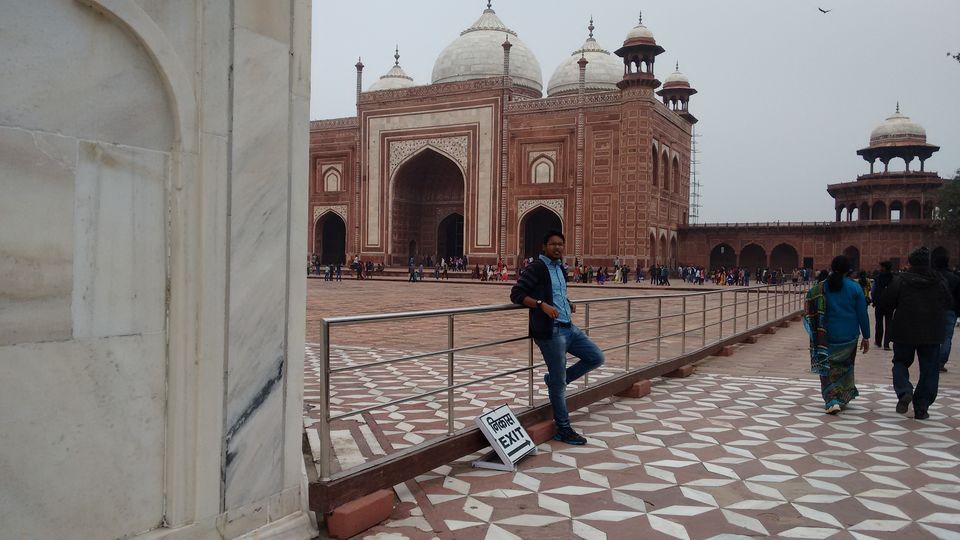 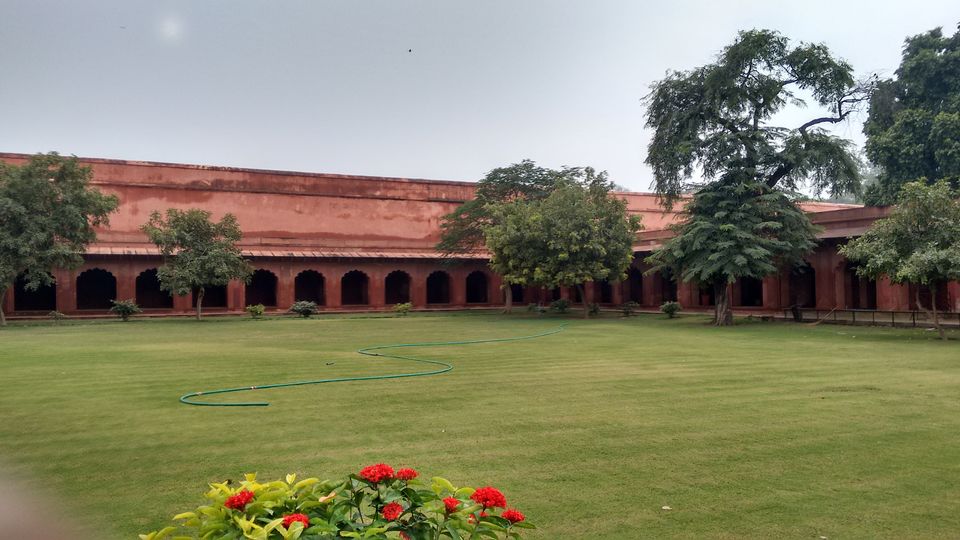 Taj is magnificient, beautiful and symmetric from all sides. 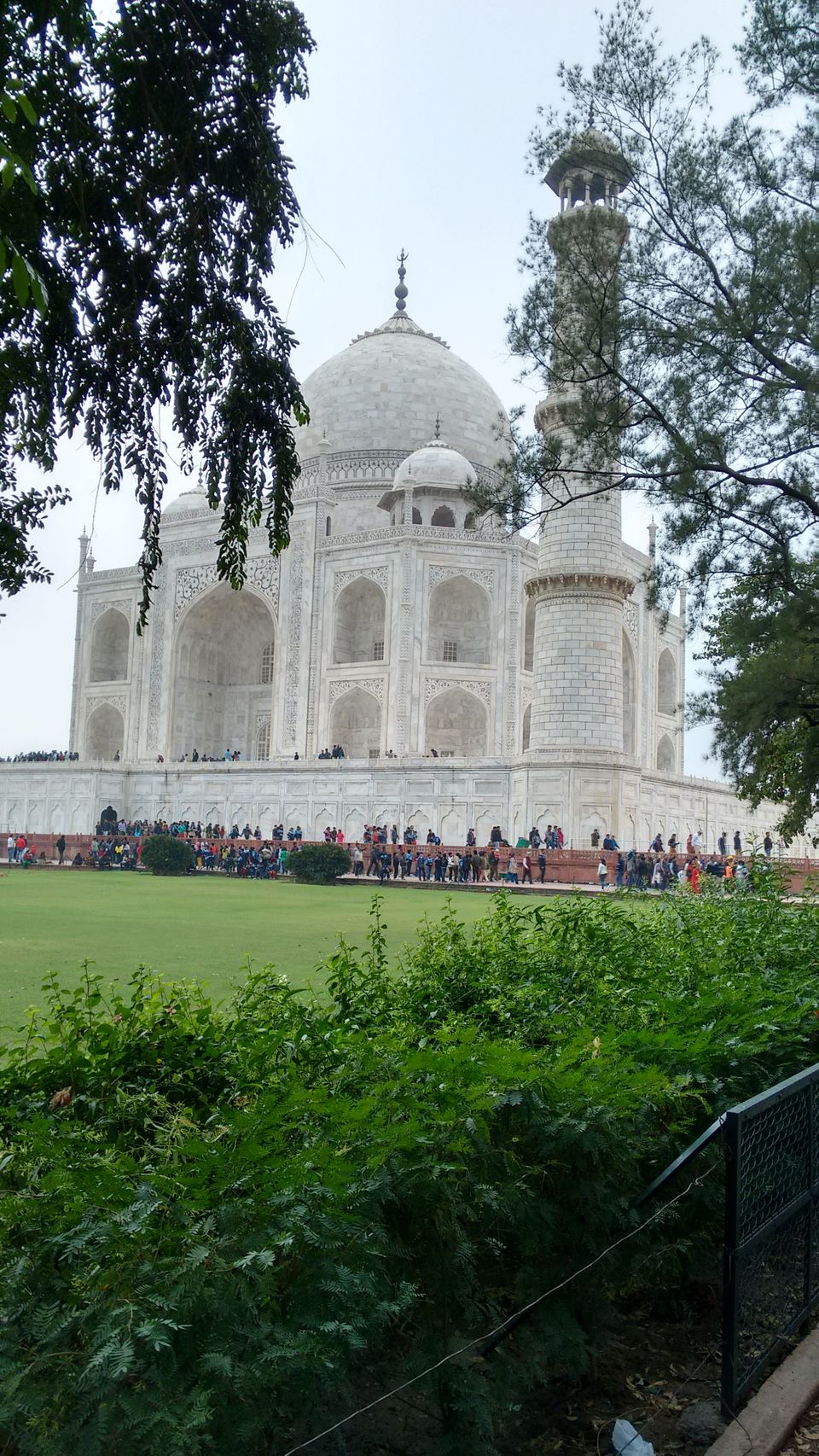 Taj Mahal. The seventh wonder of the world. If one can stay calm and not excited to see the wonder, that would be a wonder ! :D I'l start right from the beginning. There is s short path leading, a horse trot of few minutes or a open van ride of few minutes. There will be guides and photographers offering you stuff, in exchange for money more than required, so be careful ;). And surely check the guide's id card, before hiring. :) And also, you should buy white coverings for your shoes to protect the Taj. There are three entrances leading to the courtyard area, where there are rooms, where the craftsmen used to stay. The entrance gate has 22 domes on top, and looks exactly the same from both sides. And the three other gates were meant for different people, like workers, queens etc. And then you enter. They say, there is an illusion, that if you walk slowly looking at the Taj, it appears as if it is getting smaller, then again it becomes bigger. My brother said that, I don't know its credibility. The beautiful Taj will be in front of you. And there will be a lot of flashes, people take a lot of pictures. Of course. :) There is a long fountain area in front of the Taj. Behind the Taj, there is river Yamuna. Our intelligent guide explained, that, there are Sal wells under the structure of the white mausoleum. And they are fed with the water of Yamuna, which makes them so strong. Hence the Taj still stands erect over 400 years. And if the the river water level is low, there are holes designed on the structure such that, they get water from rain. So the plan is almost foolproof. Taj has two alike red sandstone structures on two sides. The left side one was for praying, people still pray, and the right for dining. There is the drawing of the inverted flower on top of the dome of the taj mahal, on the right side of the taj. The flower is actually almost 30 feet tall. And it had gold in it, long time back. It is designed so brilliantly with the symbols of diffrent religions into an inverted flower, to indicate that his love forever on Shah Jahan's love, Mumtaz. The Taj is built of beautiful white Makrana marble stone. It glows when light falls on it. I wonder how beautiful it would be in moonlight. And at sunset and sunrise. It would be mesmerizing, it still is at day time, or any time. Taj is ever mesmerizing. It looks the same from 4 sides. It has designs in such intricate and intelligent manner, that some of them will give an 3d effect when looked as whole. And the flowers, the Quran writings, all the colors in the Taj, nothing is color, but they are precious gemstones. And they glow, when light is reflected on them. Inside the Taj, there are the tombs of Mumtaz and ShahJahan, side by side. And Mumtaz's tomb is exactly in the straight line with the entrance and directly under the flower outside on the dome. And Shah Jahan wanted to built another black Taj in the same straight line for his tomb. That's when his son, imprisoned him in Agra fort, (which i will elaborate in another post). Inside the mausoleum, there are an unbelievable number of cubicles inside! Our guide said us again and again, not to refer them as rooms, as rooms are places where people stay. And people dint stay there. The inside is equally beautiful as the outside. There are gorgeous intricately designed lanterns hanging. There lay the tombs of the couple, united by death. Another amazing thing our guide told us, though I still can't believe it! The side of the taj facing Yamuna, has the image of the creator of the Taj design. And having an image is not allowed due to certain rules. The image is light and hazy but it can be clearly distinguished, it is of a man. There is a picture, I have shared. Taj is ever beautiful, and mesmerizing. A day well spent. A must go for everyone.. to definitely see the seventh wonder at least once in their lifetime. It is just amazing, just how perfect each little detail is. I haven't exactly mentioned everything, just some stuff which really striked me, and which i remember. There are benches around the park, giving a view of the Taj from many angles, and I am sure, one may discover more amazing facts, if one explores more! It is a place where you can also go and enjoy your solitude, or a date, also a family outing.So, don't wonder much, just go and see the seventh wonder, I am sure, you would be wonderstruck! ;)