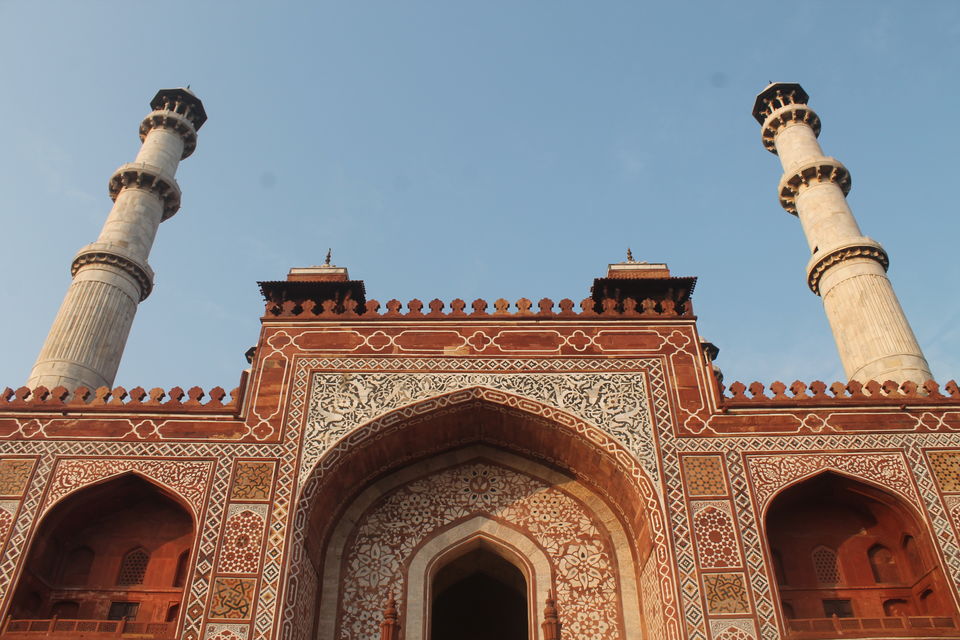 Agra as we know is the city of Monuments of Eternal love. We visited Agra from Jaipur. As we went in January, the place was too chill and was surrounded by heavy mist and no surprise any one will just fall in love with the beauty of Taj Mahal in that misty weather.

Tajmahal (Beauty in the Banks of Yamuna River)

One glance at the Taj Mahal and you will fall in love with the scintillating beauty what you are experiencing something surreal. Even after 400 years it was built, this architecture in the pure white marble is a breathtaking poetry is one of the best masterpiece. Artisans from across India, Central Asia and Europe were employed to work on the Taj.

Taj Mahal Architecture: There are four side entry to Taj mahal main Entrance.

Eastern Gate: This gate faces towards Fatehabad Town. There is a domed tomb erected on an elevated platform near this gate. This Tomb was built in the memory of another wife of Shah Jahan called Sirhindi begum. Due to this, the gate is known as ‘Sirhi Darwaza’. The main building is eight sided, having twenty four arches,a big hall and a verandah. One should prefer this gate to avoid crowd.

The Western Gate: It is the main entrance to the Taj Mahal and this gate faces towards Green Garden, Agra cantonment. There is a red sandstone edifice outside this gate which is known as Fatehpur Begum another wife of Shah Jahan.

The Southern Gate: This gate is closed for entry. The Gate is towards the south, Which faces the old Mumtazabad . It is meant for the pedestrians. On the right side of this gate is a Tomb of red stone which is surrounded by court yards and crowded with a dome. It is said that this is a grave of one lady companion of Mumtaz Mahal. Due to this reason this building is called as the Tomb of a Maid of Honour.

The Gateway To The Taj Mahal: This gateway is an octagonal entrance , surrounded by small rooms on both sides of the floors having ornamented gates on two sides, one opening towards the court yard side and the other towards the Mausoleum itself. On the three sides of this gateway, there are strong balconies.

The Main Entrance to Taj: It is an Mughal structure predominantly made of white marble. The arches are rich in calligraphy and have vaulted ceilings and walls with geometric designs. The colors in the taj mahal are not paints but are gems and hand crafted ones. There are two identical red sandstone buildings, the western building is actually a mosque. When i first looked on to it from the center of taj mahal, it is built exactly in the same line. Built in semi-translucent white marble with intricate carvings and inlay work of precious and semi-precious gems, the four identical sides of the mausoleum is majestic in its detailing. Right below the main dome lies the cenotaph of Mumtaz Mahal with gorgeous jaali and inlay work in marble, and beside it the cenotaph of her husband. The construction is such that sunlight streams in directly through the jaali and falls on the cenotaphs. But the actual tombs of Shah Jahan and Mumtaz are in a chamber in a basement room that is not open for public viewing.

The Archaeological Survey of India gives you detail that there are presence of three sets of graves in the Taj Mahal. The first one is in Cenotaph chamber. It is open throughout the year for all the tourists. The second set of grave is situated in Catacomb chamber and the opened for public viewing on the death anniversary of Shah Jahan. It is observed every year in the month of May. The third set of grave is located at the garden level.

Secret Myths of Taj Mahal: It changes color throughout the day according to the weather. In the winter season it will be warm inside the taj mahal and in summer it will be cool.

Planning to Visit: You have to take a guide if you want to know all about the beautiful architecture and history or read some blogs if you want to go all by your own. Buy the covers outside because you won't be allowed to go with the slippers inside. For visiting Mausoleum you have to pay extra Rs.200 Foreigners its Rs. 1100 and for Indian its Rs. 50

Timing: sunrise to sunset every day (06:00 am to 06:30 pm) except Friday. Every Friday the Taj Mahal is closed and only accessible in the afternoon for Muslims to attend prayers. Nighttime: 08:30 pm to 12:30 am. The night view of the monument is only available 5 days a month: the full moon night and 2 days before and after that day, except Friday and on the month of Ramadan

You can walk in the left road near the entrance of taj mahal, leads you to the yamuna river. Behind the Taj mahal is the Yamuna river which gives a spectacular view of the taj mahal and it is best place for picturesque images. The place has the boat service which is the ideal place for photo shoots. Sunset from the boat or Mehtab Bagh is one of awesome way to see the beautiful view of taj mahal with sunset. The river is quite unclean but the view is too awesome.

A second black-marble Taj Mahal was being planned. Local people say that Shah Jahan wanted to construct a shadow image across the Yamuna River—an identical opposite where he would be entombed. It was said that construction came to a halt after Shah Jahan was deposed by his son and imprisoned at the nearby Agra Fort.

When Taj draws the main attention of Agra tourists there are many more monuments in Agra which shows the beauty of mughal Architecture. Agra Fort is one of the most special monuments which has richly decorated buildings with Mughal style of art and architecture. Built purely out of red sandstone, agra fort architecture stands out as one in blue sky. Within the fort lie the structures of the Mughals known for the remarkable handiwork and ornamentation.

Jahangir Mahal: The first architectures that you will look into when entered inside the Agra Fort is the Jahangir Mahal. The Jahangir Mahal was built by Akbar as a women's quarters and was constructed adjacent to the chambers of his favourite queen Jodha Bai. The Jahangir Mahal is built in red stone and has Persian carved out beautifully in a large stone bowl used for storing rose water.

Khas Mahal: Another structure is the Khas Mahal, which also has Persian and Islamic architectures with a touch of Hindu motifs. The beauty of this mahal lies in the beautiful paintings on the surface.

Sheesh Mahal: The Sheesh Mahal [Mirror Hall] is dressing room that uses most sophisticated water engineering designs. The inside is allowed to kept cool and is beautifully decorated with a mosaic of myriad tiny mirrors.

Diwan - I- Khas: To the right of the Sheesh Mahal lies the Diwan - I - Khas, which was a hall especially for private audiences. It is built with marble that are embedded with floral patterns of semi - precious stones. Adjacent to this is the Shah Burj, used as the summer retreat.

A hidden doorway near the mosque exit leads down to the scallop-shaped arches of the large, open Diwan-E-Am.

Diwan - E - Am: This was the hall that was open to the general public. The very famous Peacock Throne is situated in this place 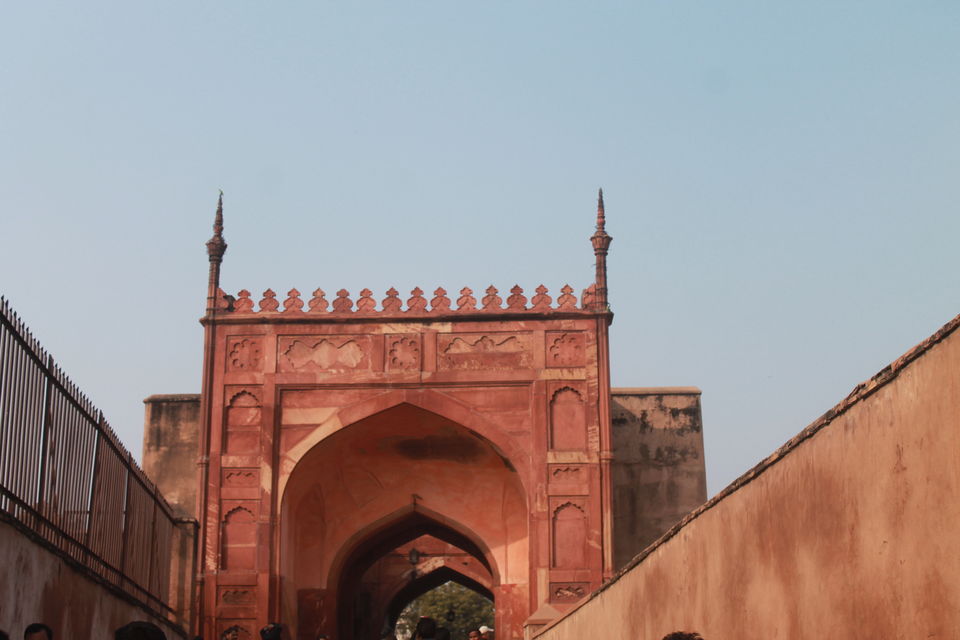 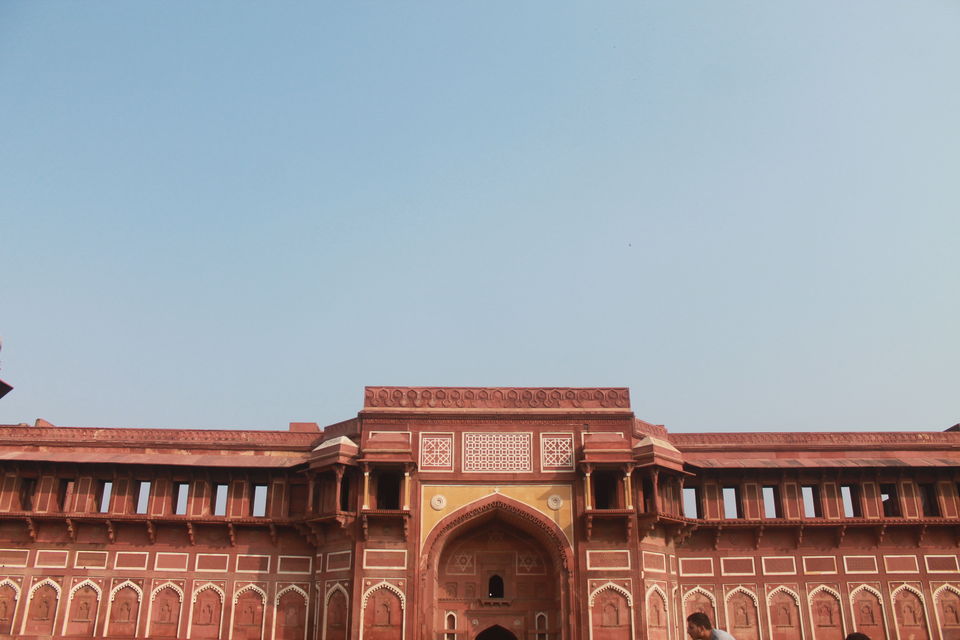 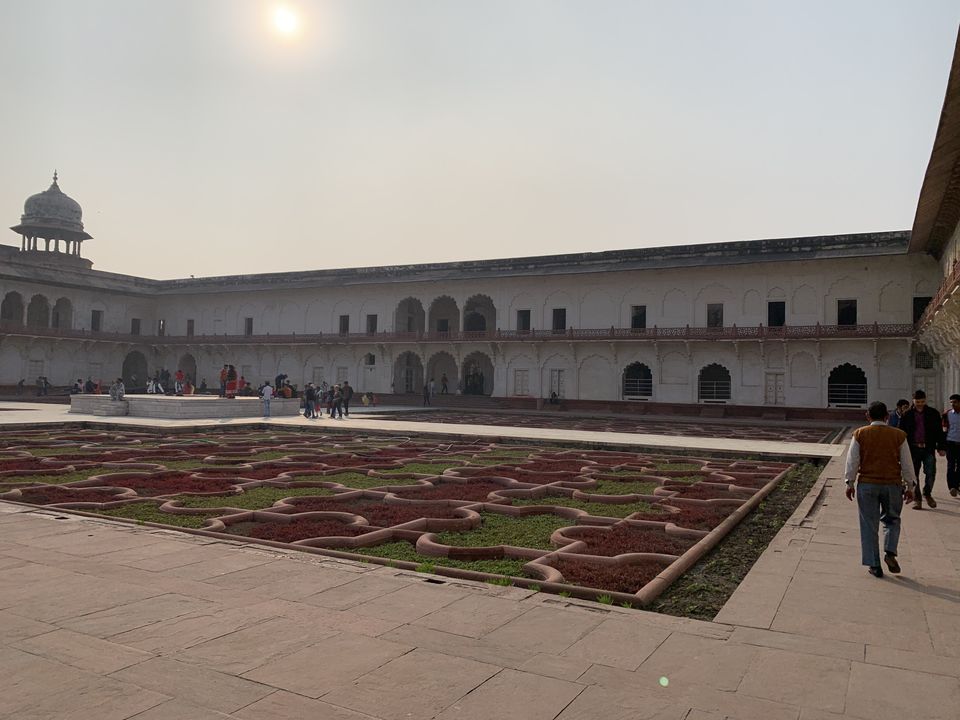 Sikandra Fort is the place where the Tomb of the great Mughal Emperor "AKBAR" stands. It is made of a red sandstone, which imparts a rich look. This is also known as the Mausoleum of Akbar.

Akbar's tomb is a medley of mughal architectural style displaying more interest in witnessing harmony of design. The tomb of Akbar, though Islamic in spirit, is a blend of styles. The magnificent entrance, use of patterns, awesome jali work with decorative stone screens, Persian style calligraphy, the charbagh garden layout etc., represents Islamic Tradition. It is 13km from the Agra fort !! But less crowded. 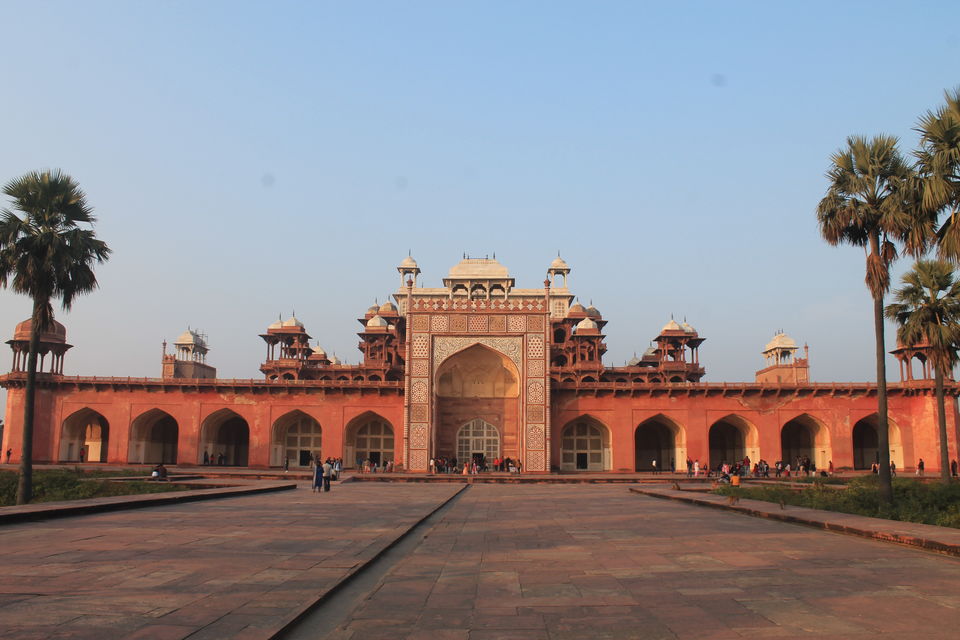 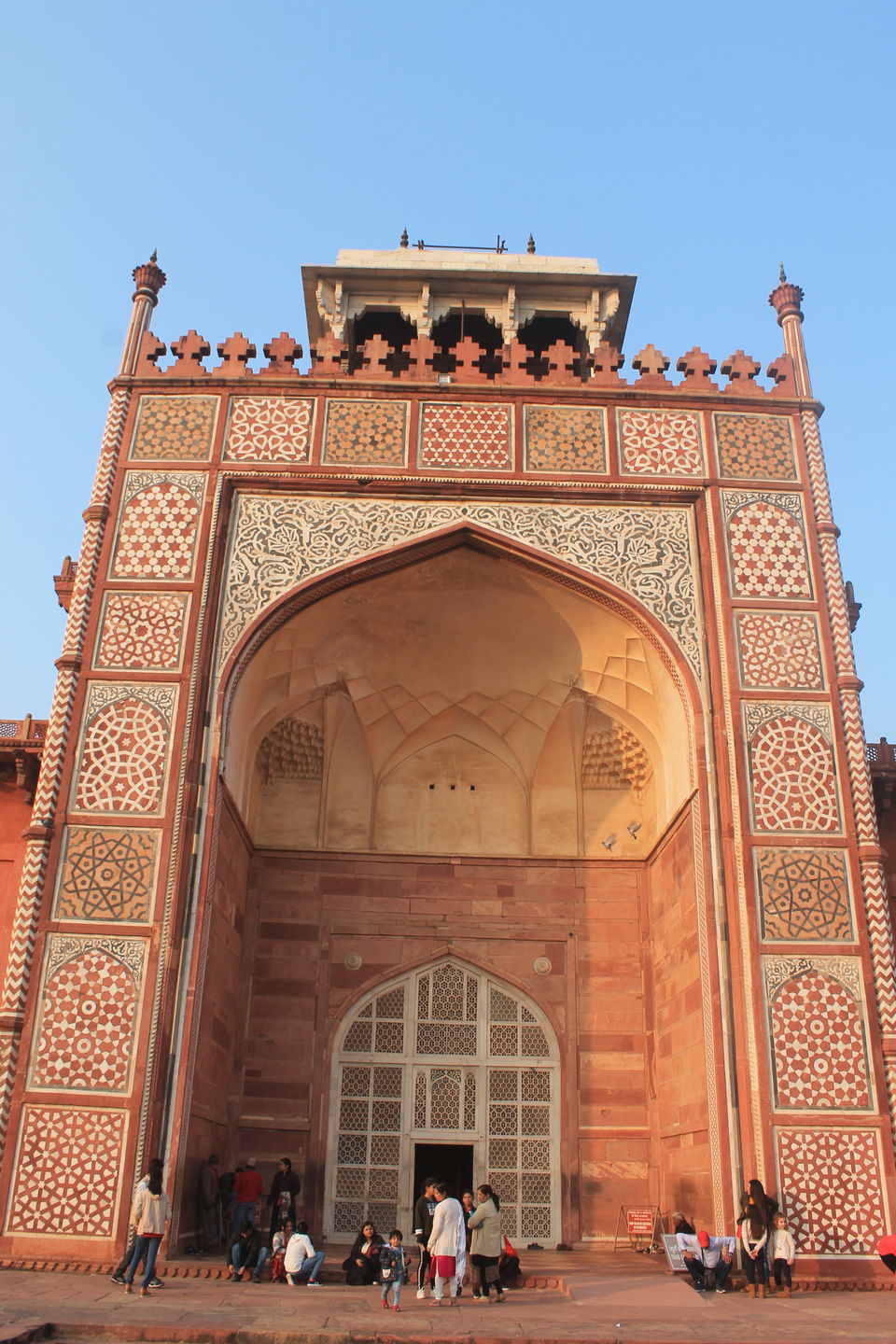 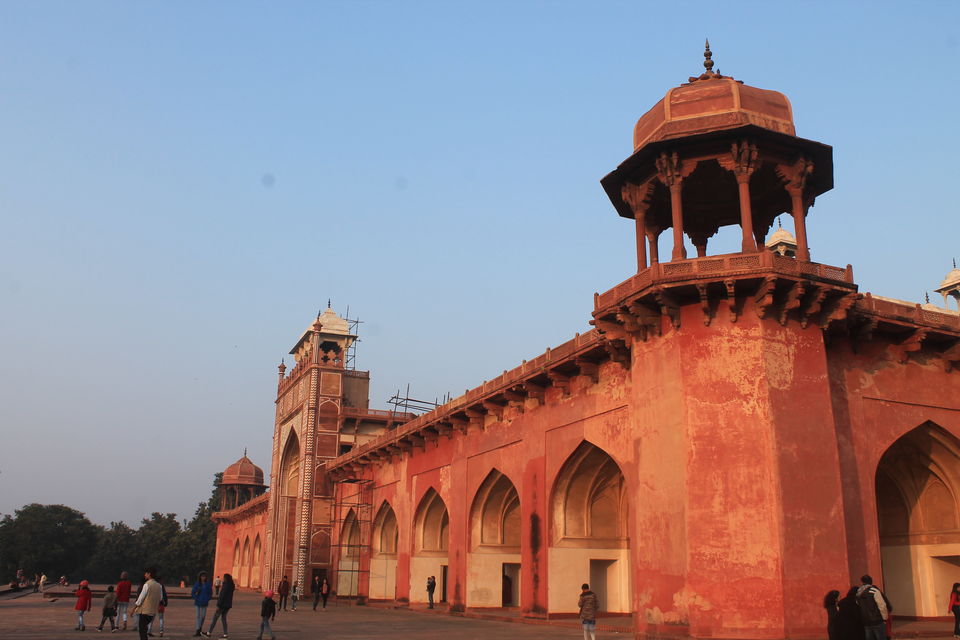 One can witness plenty of animals, peacock, monkeys, deer at this place.

Chini-ka-Rauza ( Persian-style riverside tomb ) and Itimad-ud-Daulah (Baby Taj) shares the same mughal architecture and one can look the best calligraphy and jali works with red stone and marble. The beauty along yamuna river is some other beautiful places one can visit on their trip to Agra along with Jama masjid.

Travel Tips: We visited in winter. In winter the weather is pretty cool, so please carry some jackets, sweaters and woolen caps. The temperature will be between 7 deg celsius to 13 deg throughout the day. Avoid long vacation in summer as the weather will be so hot. Prefer to visit between October to March.