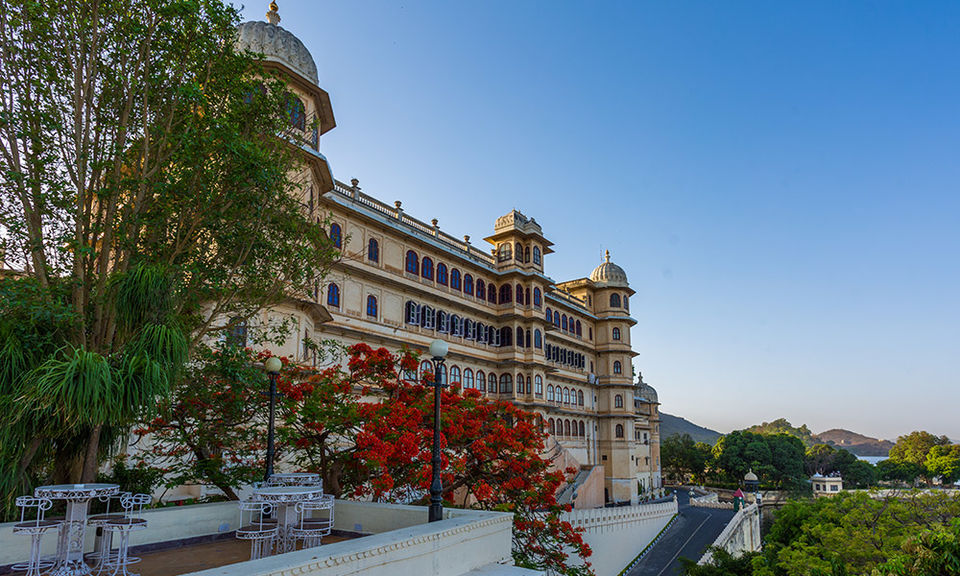 I have been fortunate enough to experience Rajasthan in the monsoon. Udaipur, with its pristine hills, serene lakes and glorious palaces is a priceless jewel in the crown of India’s rich heritage. And unlike most of the arid regions in Rajasthan, Udaipur’s dewy atmosphere adds to its charm and presents to you a different perspective of the west. With air so fresh and roads so clean, the princely state of Udaipur welcomes its guests with an all too familiar Rajasthani warmth and enriches everyone with an experience literally unforgettable.

Overlooking the massive Lake Pichola, on its banks, stands the extension to Udaipur’s royal palace, now transformed into one of their most premium hotels. Fateh Prakash Palace Udaipur is a part of the HRH group of heritage palace hotels, owned by Prince Lakshyaraj Singh Mewar. Situated at the City Palace Complex, Fateh Prakash Palace is classified as a Grand Heritage Palace along with its sister property Shiv Niwas Palace.

As we approached the palace complex and zoomed steadily up the hill through the beautifully ornate gates, heavy rain clouds seemed to follow along. Palaces demand royal welcome and very rightfully so, even the most basic of rooms are decorated exquisitely, and gifts you a view overlooking the lake, along with the glorious white Taj Lake Palace, leased out to Taj properties by the Palace itself, that floats proudly in the middle of the lake. A little north of the Taj, on the other bank of the lake, you can see the stunning Udaivillas property, engulfed in a coat of green. A little far from the left of the Taj, sits the Jagmandir Palace, once the shelter to Emperor Jahangir, followed by posing as the villain’s residence in the James Bond movie Octopussy, and now a part of the HRH group of hotels.

Our abode for 2 nights

Our room, the Dovecote Suite charmed us in the most unnatural manner. The stunning window seat glistened with its velvet pillows and a golden framework of the panes. As I pushed the windows ajar, the thundering clouds gave me a sensation of calmness and soothed my excited nerves. Mesmerized by the view, the ambience, and also the massive bathroom that could be a palace room by itself, I sat myself down and witnessed the sky turn a hypnotizing turquoise. It’s raining in Rajasthan, I smiled to myself, and ordered for some masala chai, which arrived a few minutes later with Alphonso mangoes! Did I mention the tub in the bathroom also had the same view? Following some mango ravaging, I decided to immerse myself in a hot, bubbly bath with a glass of champagne and the breathtaking view to complement me.

As you’re tucked comfortably inside the blanket of luxury and royal warmth, you kind of forget about everything else. It was like waking up to a dream. I had to go downstairs, the golf cart was waiting for us to take us to lunch at the Sunset Terrace.

Lunch after a full Alphonso seemed unlikely; but we were royal guests. And royal guests should not be fussy. The clouds had cleared by then, and the sky was a faint gold, radiating a charming glow on our skin. Stepping inside the Restaurant, my mouth hanging with awe, I wondered if the usherer heard my little squeal of amazement. The ceiling, adorned with 5 gigantic chandeliers, was so beautiful and elegant that the surrounding walls, with all its heritage décor and art, fell faint in comparison. After a scrumptious meal, I got to know that the ornate restaurant is in fact, a part of the Durbar Hall Sabhagaar, which is one of the main features of the hotel, an is of great historical significance. In 1909, Lord Minto, the Viceroy of India, laid its foundation stone and the hall was originally called Minto Hall in his honour. With opulent crystals and velvety canopies, the main Durbar Hall has on its walls huge portraits of the Maharanas of Mewar, besides arms and swords of its famous icons like Rana Pratap. Also, the arched gallery of the Durbar Hall Sabhagaar, on the first floor, houses the famous Crystal Gallery, which is probably the largest single private collection of crystal anywhere in the world.

My luncheon experience was followed by a trip to the enormous vintage car collection of the HRH Rana Fateh Singh himself. The Vintage & Classic Car Collection, another one the stunning attractions offered by the City Palace, can be viewed entirely by the general public. All the vehicles on display have belonged to the Maharanas of Mewar both past and present. Despite some vehicles being many, many years old, each one has been restored painstakingly and all of them are surprisingly in working order. Housed in the former Mewar State Motor Garage in a crescent-shaped courtyard, the collection is a glorious assortment of vehicles, including several cars from Rolls Royce, Mercedes, Cadillac, MG, etc., all standing fashionably for the guests to marvel at. And like any other person would, I was also left wide-eyed and exhilarated.

As the buggy scurried past the lawns back to my hotel, I was already down for another round of siesta. I glanced at my wristwatch and calculated that I still had a good 3 hours before the light and sound show at the City Palace compounds and 2 more days before I bid adieu to this enchanting, addictive luxurious escape.