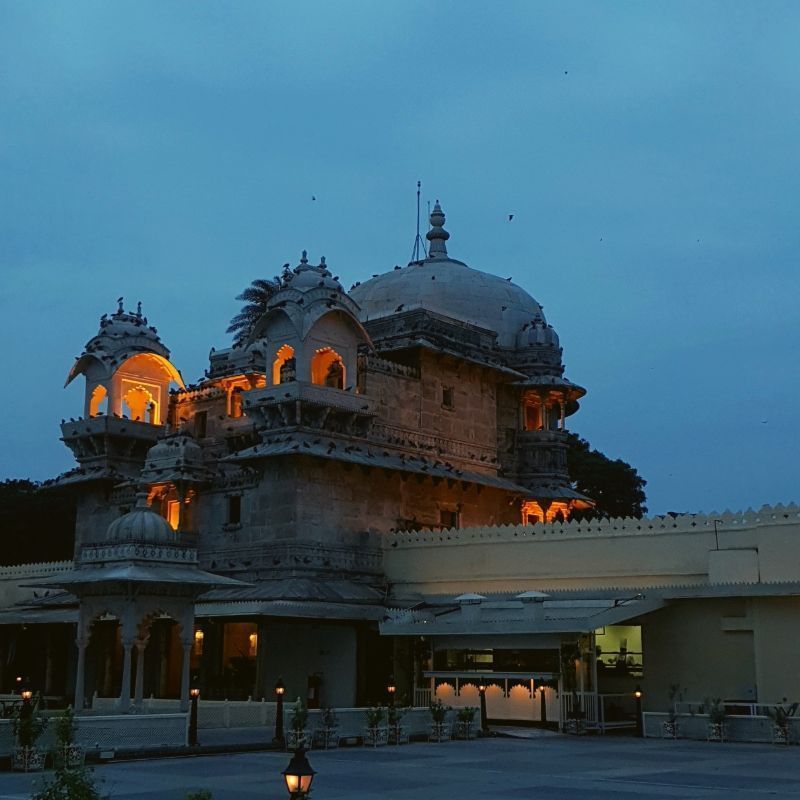 Located on the eastern shores of the picturesque Lake Pichola, the palace looks straight out of a fairy-tale.

With Hindu architecture and crystal clear lakes, Udaipur stands as the oasis in the concrete. Come here and quench your thirst of witnessing the Rajput valour and hospitality.

The evening has set in. The western sky, however, still wears a tinge of orange adding to the magic of a non-defining aura inside the City Palace. The palace grounds of the city palace, Manek Chowk, serves as the venue for the famed light and sound show. Seated for show scheduled to start at 8 pm, I was at awe of the architecture. Some hundreds years ago, the Maharanas of Mewar would hold court or indulge in festivities right here.

Pushed into a sub conscious state reminiscing the regal history of Udaipur with montage of Maharana Pratap going around my mind, when a baritone of Maharaja Arvind Singh Mewar (the present Maharana) introduced us to the narrative. A literal lake breeze blowing around and the echoes of a Dolby quality acoustics transferred us to the 8 th Century, when Bappa Rawal at Chittor had founded the Guhila Dynasty, which will later branch out as Sisodia Rajput dynasty giving birth to most vigorous kings in the history of India.

So clean a city!

Rewind to the break of dawn. As Mewar Express chugged along the Udaipur City station, an early morning rain welcomed us - a relief from Delhi's 45 degrees! The taxi manoeuvred through serpentine lanes of the city. What stuck us was the cleanliness. I don't remember when did I spot such a tidy Indian city without garbage dumped, paan stained walls or plastic! All of a sudden, there is a royal gateway that marks the entry to the palace area of the city with Lake Pichola serving as the perfect backdrop.

The guards opened the gates to access the road leading to the lake. The dim sunlight falling on the golden stone of the palace make it look fabulous. Located on the eastern shores of the picturesque Lake Pichola, the palace looks straight out of a fairy-tale. The history-soaked interiors, dotted with miniature paintings, portraits, royal artefacts and the armoury of the Mewar dynasty transport you to legendary time right from the reception area. Maharana Fateh Singh ruled from 1884 to 1930. This palace, constructed during his reign as an exclusive venue for royal functions, has been meticulously preserved. And now this magnificent palace is a grand heritage hotel with seven star amenities.

Dovecote Premier Suites - that were our home for four days over looked the lake with turquoise water flowing by. Decorated with original paintings and period furniture from the toshakhanas or royal storerooms cocoon us in velvety luxury as we soak in the ever-changing hues of the lake from large arched windows.

The Durbar hall, which is one of the main features of the palace, is of historical significance as in 1909 Lord Minto, the Viceroy of India, laid its foundation stone. While the hall is intact now, a Crystal Museum has been built around it. This is the world's largest crystal private collection. Established by Maharana Sajjan Singh who ordered the crystal collection from the Birmingham-based F&C Osler Company in 1877.

One can descend to the Satkar Hall below the Durbar Hall to enjoy a hearty European meal with a marvellous view of the lake and the Lake Palace.

The capital of Mewar dynasty was Chittorgarh until 1550s, when Mughal started attacking frequently. No matter how combative Mewar kings have been, they refrained from wars and were lovers of peace. Udai Singh, the then ruler of Mewar, planned to move to a fertile valley from the hill region. While he was hunting one afternoon around Udaipur forest, he met a hermit, who blessed him and asked him to build a palace at the spot. The hills of Aravalli provided natural fortification and the hilly region made it difficult for armoured Mughal horses to climb. He started building the palace in 1557 and moved in 1559.

The lake was smaller having built by the tribesmen in 14 th Century. Udai Singh commissioned to enlarge it to use it as primary source of water and also keep the climate cooler.

Just when you thought Udaipur is a page from the history- appears Roger Moore dressed as James Bond from the movie Octopussy. A major chunk of this Hollywood movie has been shot at Udaipur. Even today, you can see the boats floating on Pichola that have been used in the movie. The pool where Bond romanced with the girls is the 7 feet deep swimming pool that guests can access while staying at the hotel. And the magnificent Rolls Royce Phantom driven by the villain is still in driveable condition.

Past 8 o'clock in the evening, with tourists gone, the palace suddenly wears a gloomy look. On a full moon night that solitude gets prominent. With a play of light and shadow all around, each pillar cry of sacrifice. This is the dynasty that has witnessed Jauhar of Padmini and Rani Karnavati, grandmother of Maharana Pratap when attacked by the Muslim rulers.

The Mewars have fought with all might. The sacrifice isn't just by men. Udai Singh's uncle Bhanvir who was asked to be the temporary regent before Udai grows up wanted to be the king and went to kill his nephew. This is when Panna Dai escaped with Udai leaving his own infant son Chandan dressed as prince to be killed.

Who knows may be every night, Chandan might be walking down the palace corridors dressed like Udai Singh and looking after the wellbeing of the dynasty.