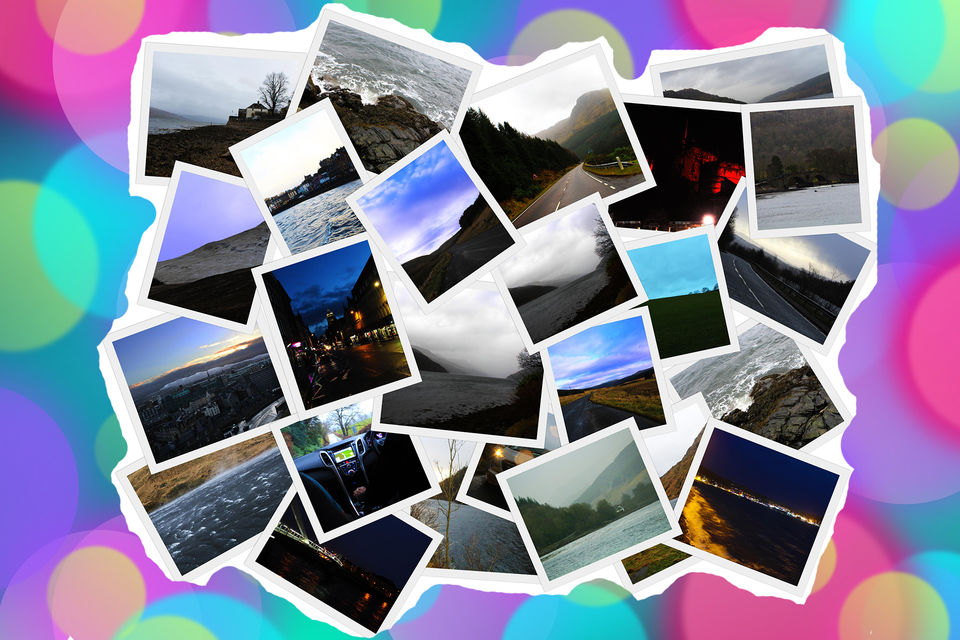 The Irish and Scottish mythologies tell the story of an Egyptian Pharaoh Queen named Scota. Hesychius, a Greek grammarian, probably in the 5th or 6th century mentions a temple of Venus Scotia in Egypt whose rites were performed at night. The name "Scotia" is not an Egyptian name, but a Greek word meaning "darkness". There are some other stories also behind the name of the beautiful Scotland. The next trip was to this beautiful land in the winter of 2016-17.

Warnings of up to 90 mph wind speed and heavy snowfall was the forecast for those four days in Scotland. But, the red alerts couldn’t make us stay in the cozy apartment in Halifax, England. We wanted to explore the land of Scots. I fastened driver's seat belt, ensured that the fuel tank is full, set the GPS navigation to the capital city, Glasgow and within minutes, we crossed the first traffic signal. It was a brand new Hyundai i30 which had run only a few hundred miles. It was half past nine in the morning on the 24th of December 2016.

It was my first drive in UK. After the initial hiccups of following the right lane and the car controls, within 20 minutes, we entered the motorway. Glasgow is 240 miles away from our starting point. 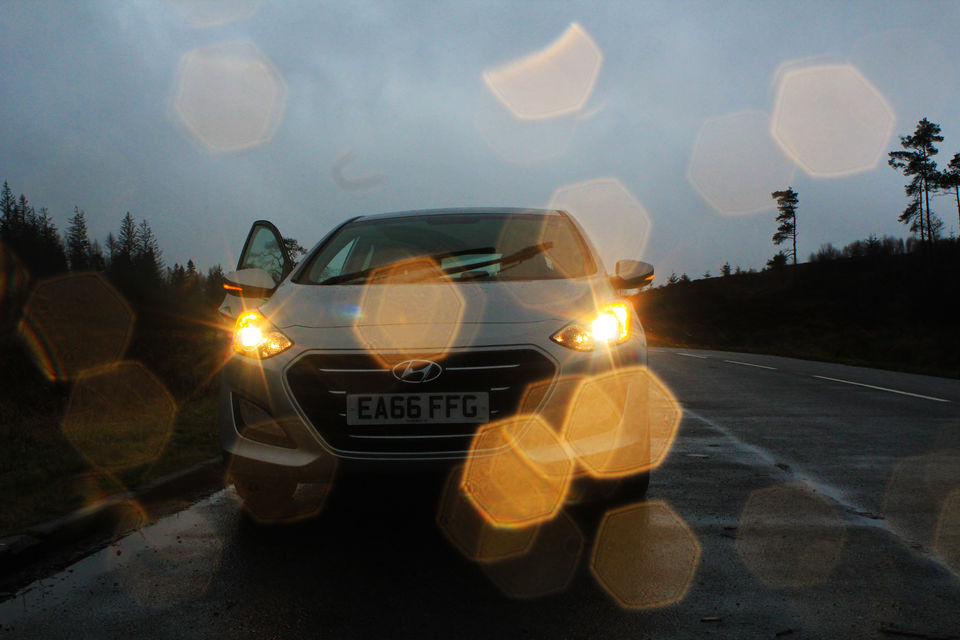 It took me sometime to grasp the road discipline in the motorway. Arijit Singh's songs added the thrill to the first driving holidays! The sun and the clouds were playing hide and seek and in between the rains started playing peek-a-boo. Around 12 noon, we stopped at a Service Center and had burgers, fries and a big Coke. We had crossed half the distance by then.

We entered Glasgow city at 2:30 in the afternoon and again, following the right lanes and roundabouts caused some confusions. After missing a left turn, took few U-turns and yes, we reached the hotel.

We took an hour break and spent some time on the city map to locate the main areas of interest in the City and by 4 PM, we found ourselves roaming somewhere around the City center. The area was almost deserted, may be due to Xmas eve. We reached the banks of River Clyde and the surroundings looked very beautiful. The sun was set by then. The reflections of the light from the buildings along the banks in the river provided a stunning view. Later, we walked through the shopping realms and streets where we experienced a sharp contrast to the desertness. Glasgow is the largest city in Scotland. 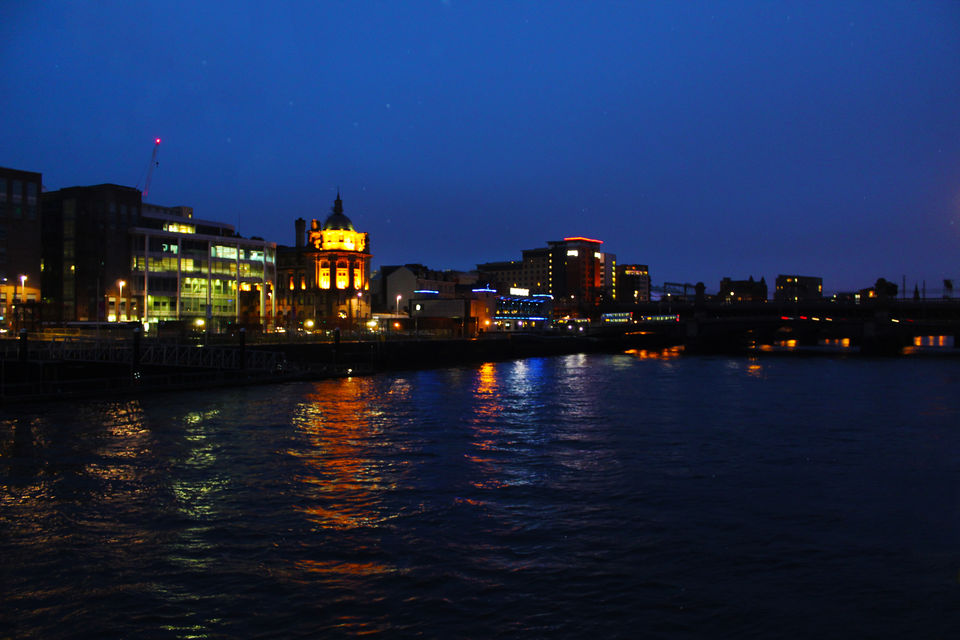 Later, around 9:30 we had pizza for dinner and we were back in the hotel. The next day morning, we had planned to check out at 8 after breakfast.

It was Xmas. Quickly send some Xmas wishes to some close friends and family in the morning. Being Xmas day, the hotel cooks was on holiday, but we got toast, muffins, croissants and tea for breakfast. We took the scenic route through Balmaha-Argyll forest-Loch Lomond and the final destination for the day was Oban, the famous resort town 140 miles from Glasgow. Very soon we hit the country roads and the ride along the beautiful countryside landscape reminded us of the MS Windows 2007 desktop picture. The morning was sunny and green meadows embroidered both sides of the road. 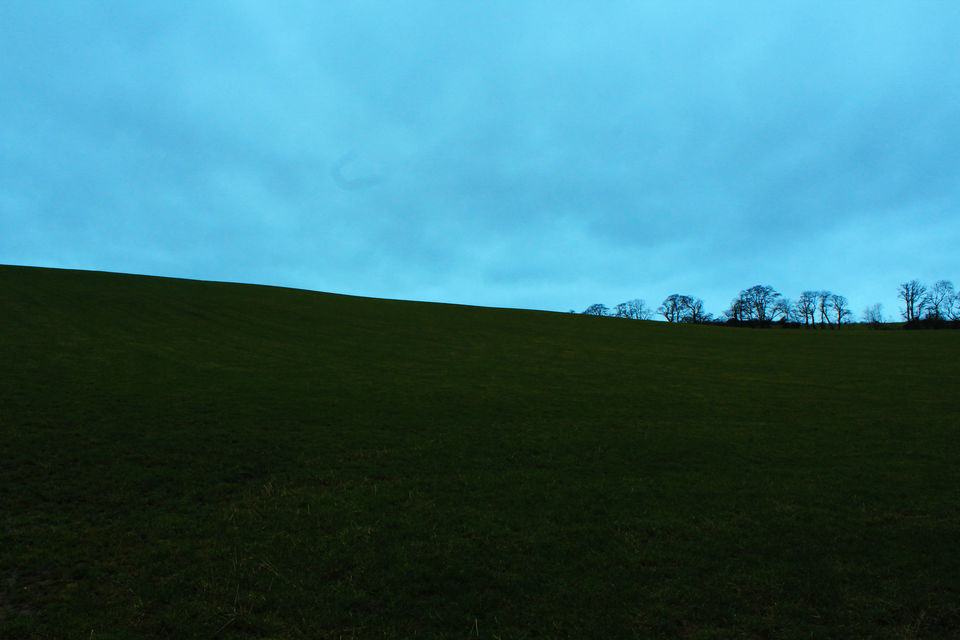 We reached Balmaha after 1 hour of driving. Balmaha is a village on the eastern shore of Loch Lomond. Loch is the Irish and Scottish word for a lake. Loch Lomond is the largest inland stretch of water in Great Britian. The scenery around this place draws people from all over Scotland and beyond. There is a well known century old traditional Scottish song on this lake......

Where the sun shines bright on Loch Lomond

Me and my true love were ever wont to gae

On the bonny, bonny banks of Loch Lomond 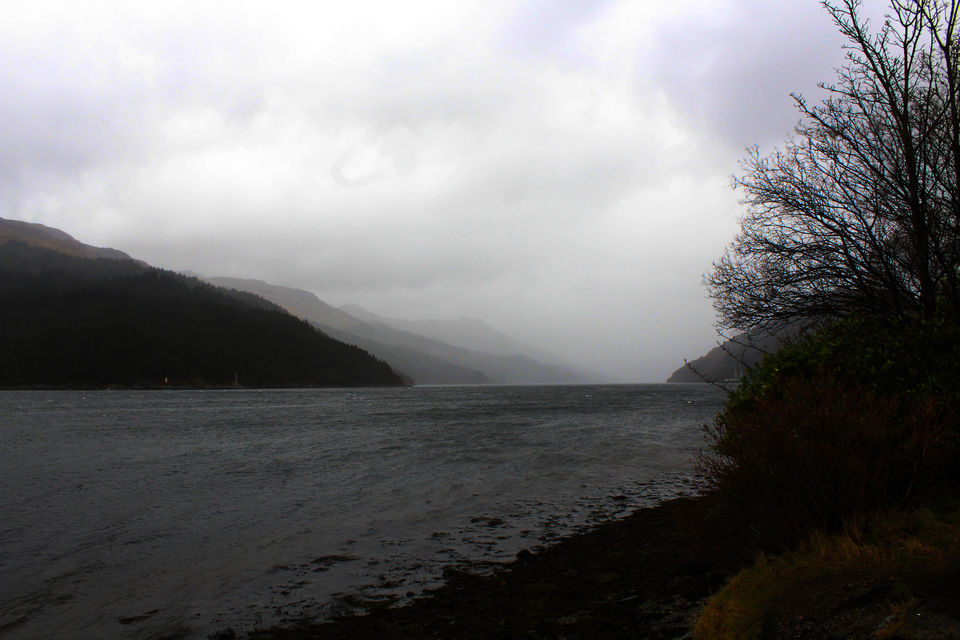 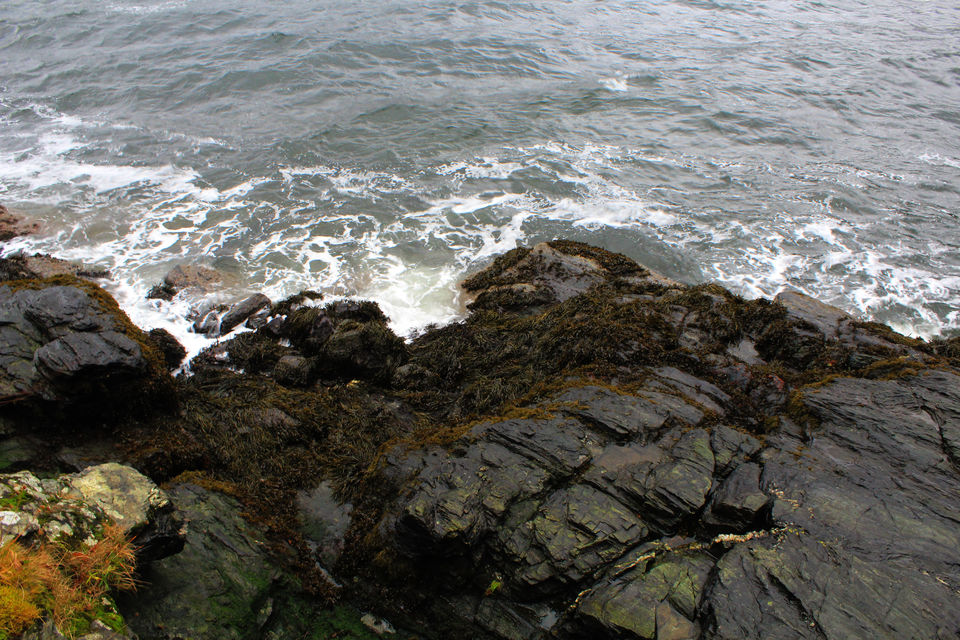 You can listen to the full version at https://www.youtube.com/watch?v=1uZ-p-tN8Gs

We walked along the banks of the river enjoying the beautiful mountains and the waves created by the strong winds. We met an old couple and exchanged Xmas wishes. It started raining heavily and we started towards the next destination. Slowly we drove along Loch Lomond banks to reach the village Luss in Argyll & Bute on the west bank of Loch Lomond. It was really an awesome experience to get along the banks of the beautiful lake. We stopped at many places on the way to Luss mesmerized by the beauty of this wonderful land. The strong winds created ripples in the lake. The leafless tall trees swayed fiercely. The low lying dark clouds were passing at a high speed.

The straight road that took us there meanders along wide plains and mountains looming on either side. Though the timid round signs along the road try to impose a speed limit of 50mph, we crossed the limit for most of the ride. While on the route to Inveraray, we stopped along the side of a huge pond and a mountain on the other side. The wind was blowing very heavily and felt like sweeping away into the pond. The car was swaying. Strong waves in the pool added to the fiery nature of the wind. We couldn’t spent more than 5 minutes there.

We reached Inveraray at 2 PM. It's a very beautiful town in Argyll and Bute with some old ships anchored and surrounded by Loch Fyne and huge mountains. The old castle added to its charm. 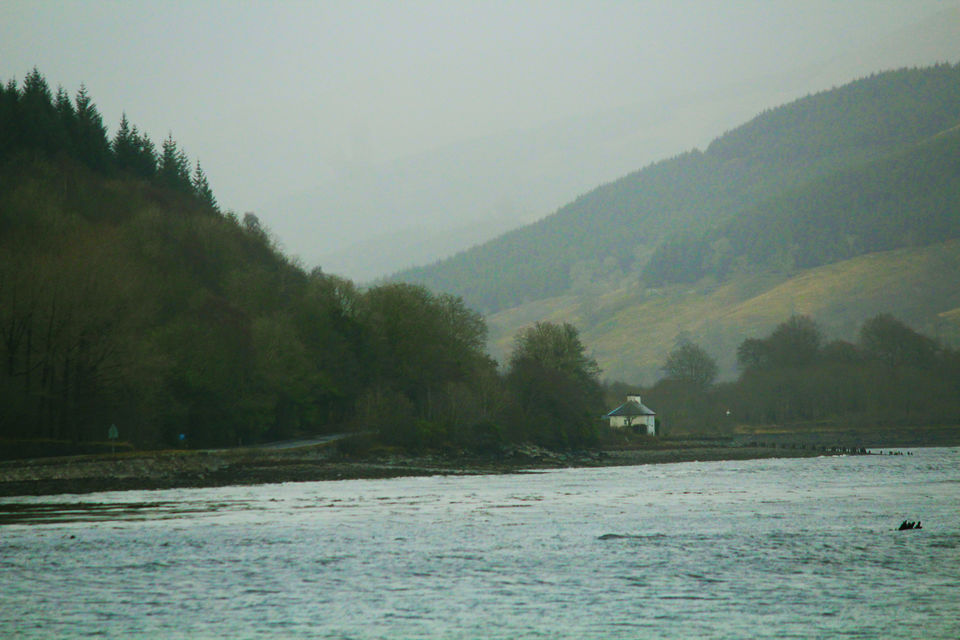 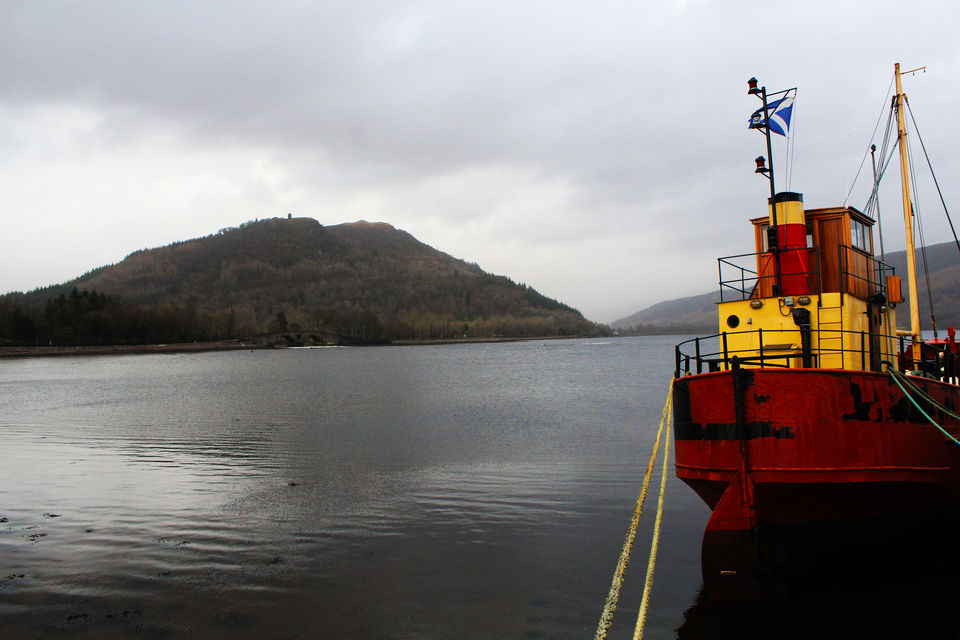 We spent more than an hour there and were ready to drive to Oban, the resort town. On the way, we saw the exceptionally beautiful uninhabited hidden jewel of the castle, Kilchurn Castle. This Castle is just off A85 in the shadows of the modest peak of Ben Cruachan. It remains a hidden mystery beyond the trees and on the banks of Loch Awe. Kilchurn Castle brings the magic of the Scotland Highlands to life, if only you know where to look. A faraway mountain was covered with snow. It's one the frames that I will remember forever. 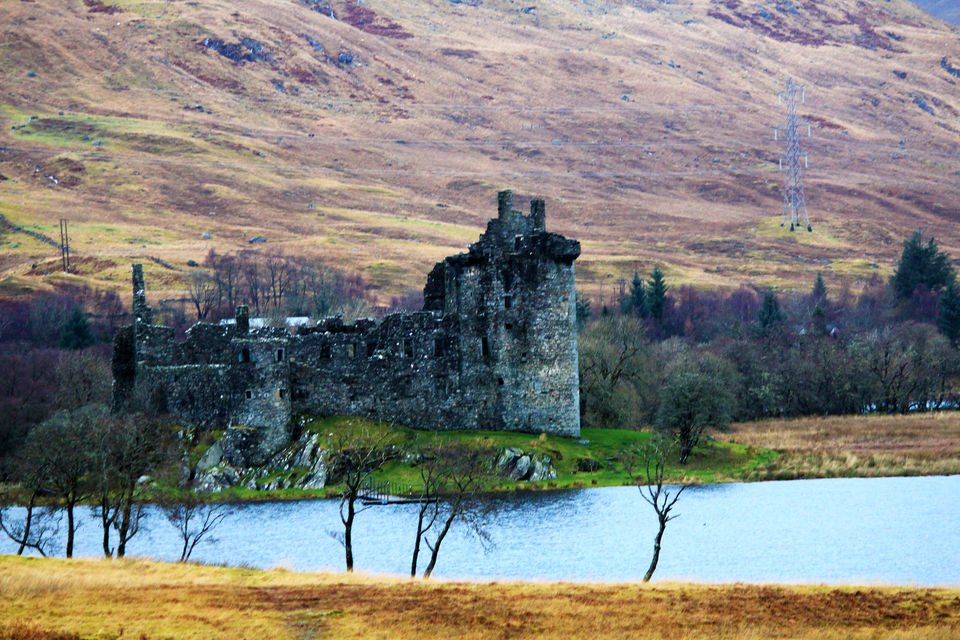 Kilburn Castle and the Valley 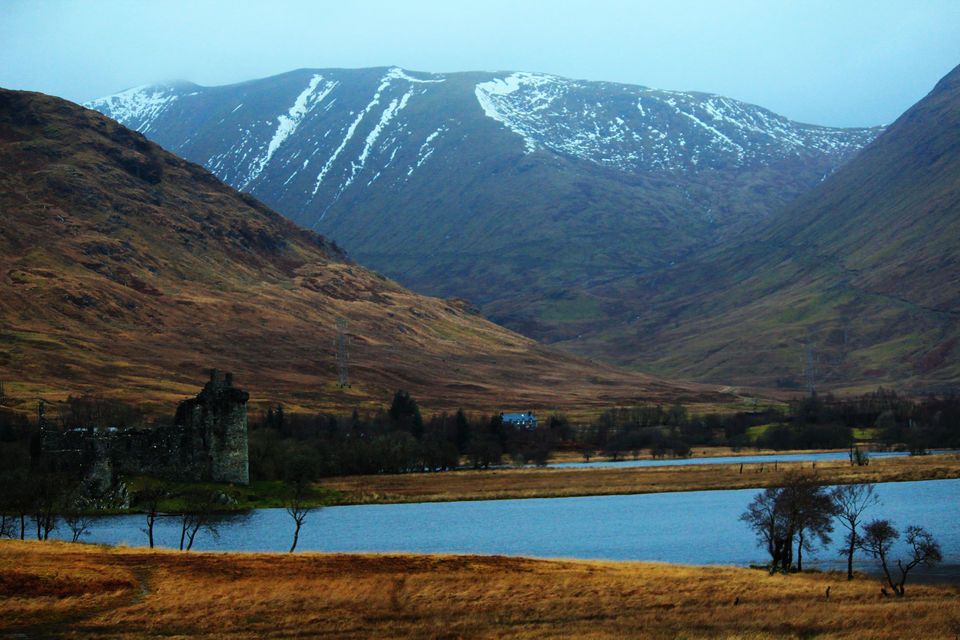 We reached Oban at 4 PM. It was getting dark by then.

Oban means "the Little Bay" in Scottish Gaelic. The bay is protected by the island of Kerrera; and beyond Kerrera, the Isle of Mull. To the north, is the long low island of Lismore, and the mountains of Morvern and Ardgour. We checked in the hotel and within 30 minutes, we were walking along the bay amused by the stunning views of the bay area. The horseshoe shape of the bay gave a wider view and the waves were breaking the silence. This bay reminded me of Queen's necklace in Mumbai. Water sports, whale and seal watching tours were closed due to winter. Else, we could have gone for that the next day. We were very hungry as we had only cookies and chips for lunch. We got into an Indian restaurant, but the sweet Peshawari naan didn’t satisfied my taste buds. 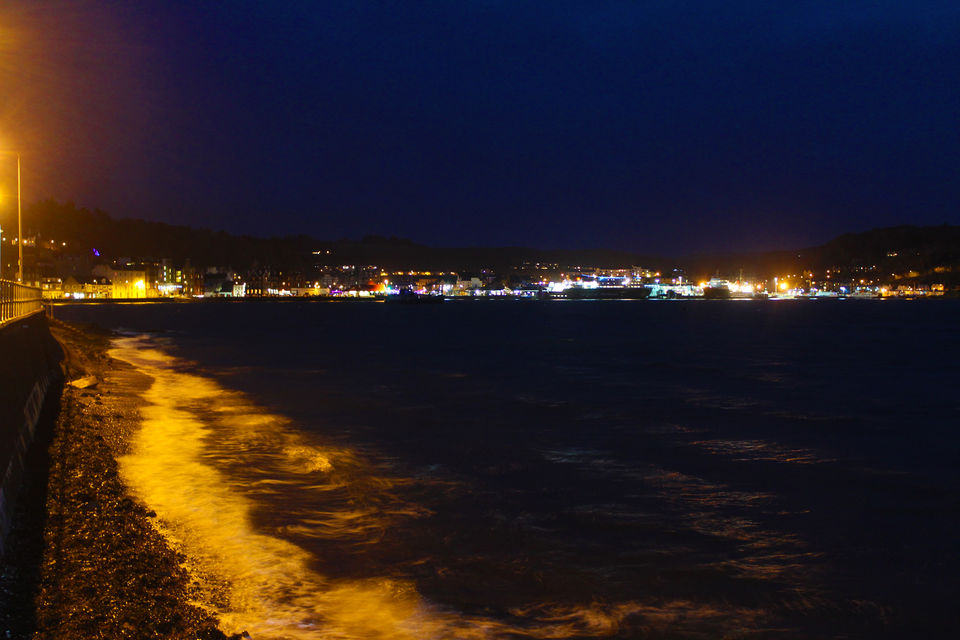 The stay in Oban was really good. It was the first time, I was sleeping in bunk beds and I took the upper one !

I had a heavy Scottish breakfast. While travelling along country roads, it's not easy to find restaurants of your choice. I didn’t want to have cookies and chips again for lunch. After spending some time in the bay area, we gave up the idea to visit Fort Williams as we wanted to spend more time in Edinburgh. We took A85 route via Inverardran. The route was surrounded by icy mountains on both sides and we drove along the lochs. We saw a train passing slowly in the valley. The landscape was very much different from what we saw in the last two days. To add to the thrill of exploring new places, suddenly snowfall started and slowly we continued to Edinburgh. 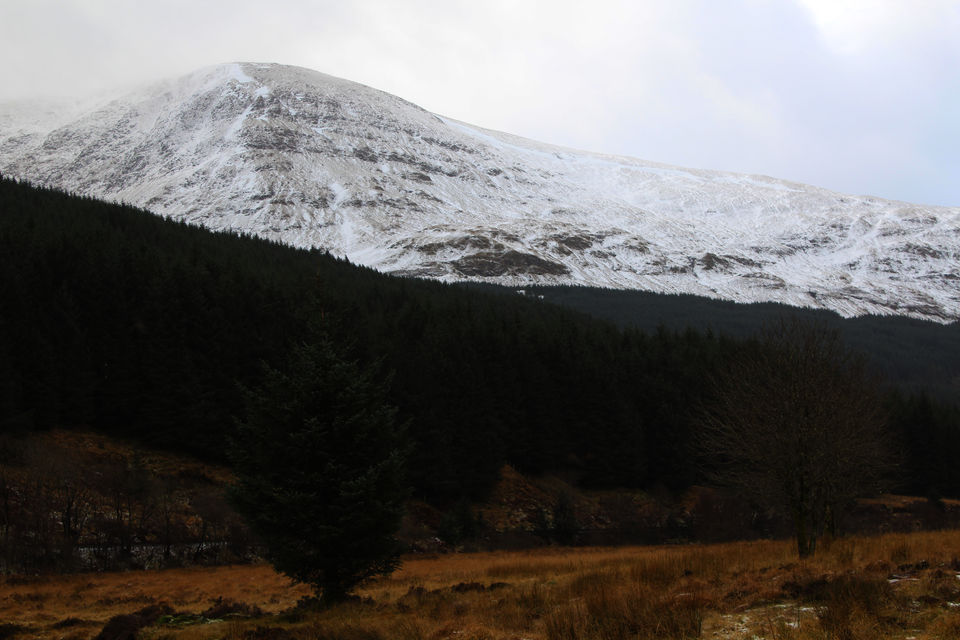 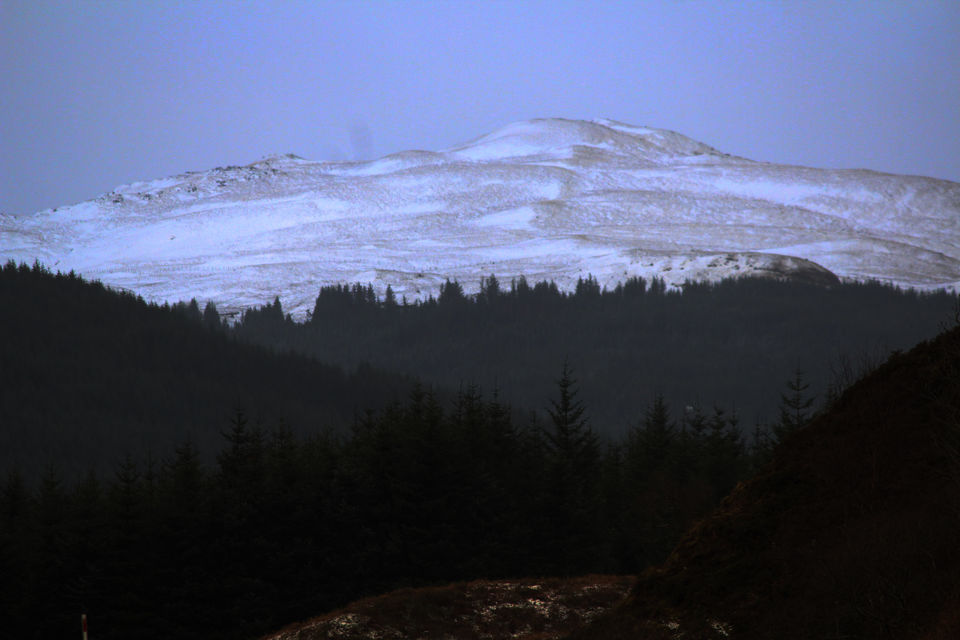 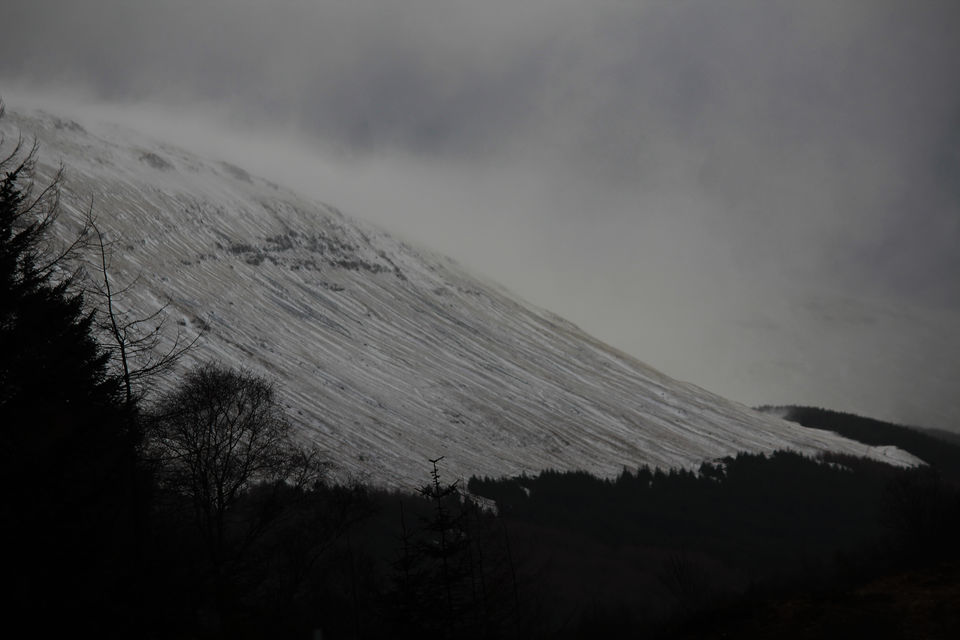 Recognized as the capital of Scotland since the 15th century, Edinburgh is the seat of the Scottish Government, the Scottish Parliament and the Supreme courts of Scotland. Edinburgh is a hub of all the best things to do, see and enjoy in a city. It is the most visited city in UK after London.

We reached Edinburgh by 1 PM and checked in to Leonardo Royal Hotel. After lunch, we decided to visit Edinburgh Castle. The Castle is a historic fortress which dominates the skyline of the city of Edinburgh, from its position on the Castle Rock. Its importance as a part of Scotland's national heritage was recognized increasingly from the early 19th century onwards, and various restoration programs have been carried out over the past century and a half. As one of the most important strongholds in the Kingdom of Scotland, Edinburgh Castle was involved in many historical conflicts from the Wars of Scottish Independence in the 14th century to the Jacobite rising of 1745. Research undertaken in 2014 identified 26 sieges in its 1100-year-old history, giving it a claim to having been "the most besieged place in Great Britain and one of the most attacked in the world". 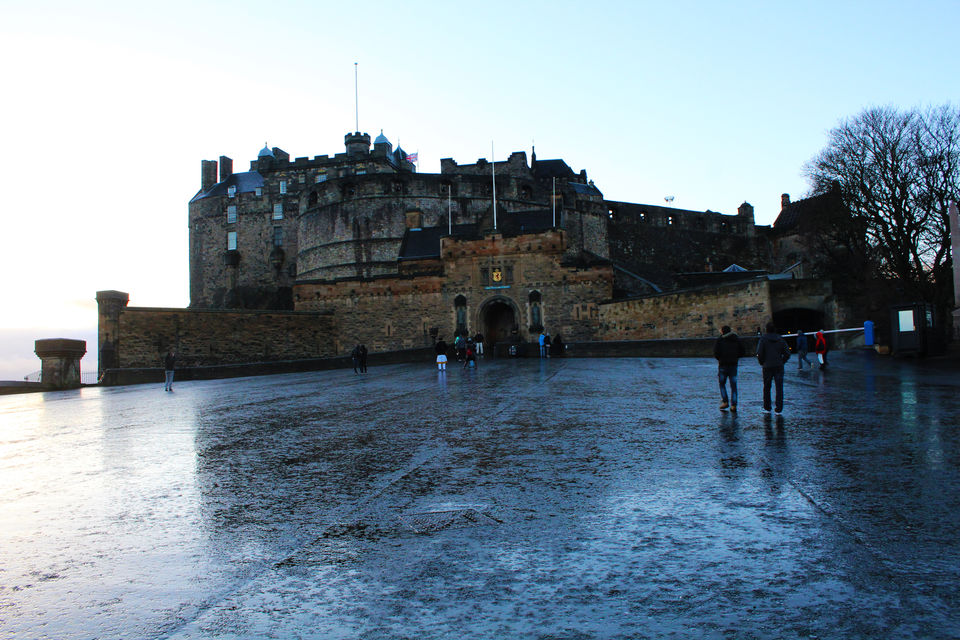 As it was Boxing Day, the Castle was closed. We spent some time on the Castle Rock, which offered a magnificent view of the city. We could see snow clad mountains far away. Later the day, we visited Scott Monument, the Victorian Gothic monument to Scottish author Sir Walter Scott. It is the largest monument to a writer in the world. We spent some time in Princess Street gardens and roamed in the city for a couple of hours. After dinner, we headed to the hotel. The day was tiring and we fell asleep soon. 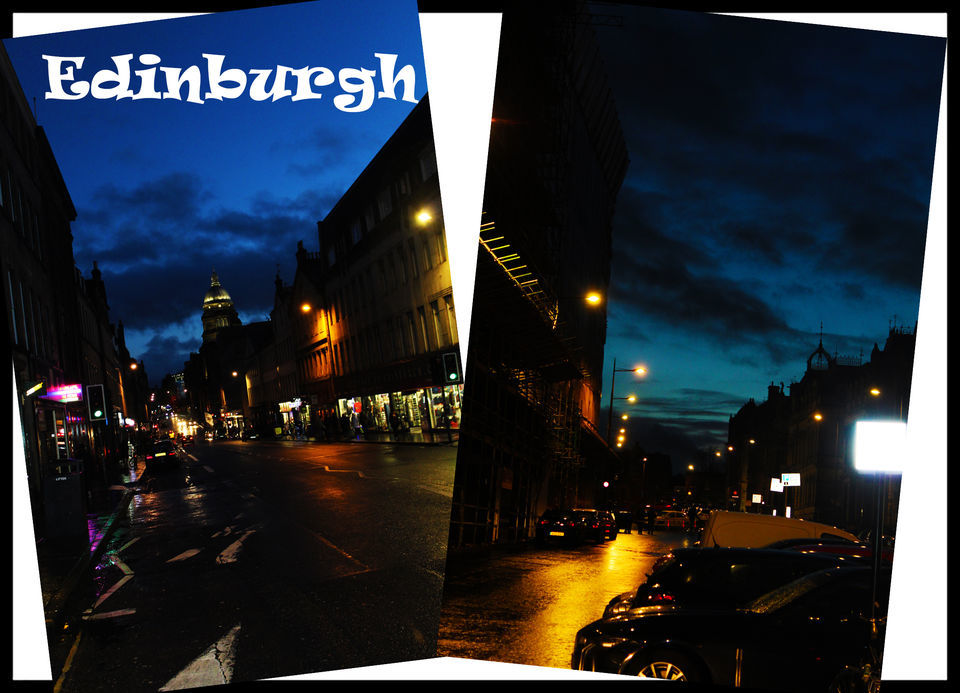 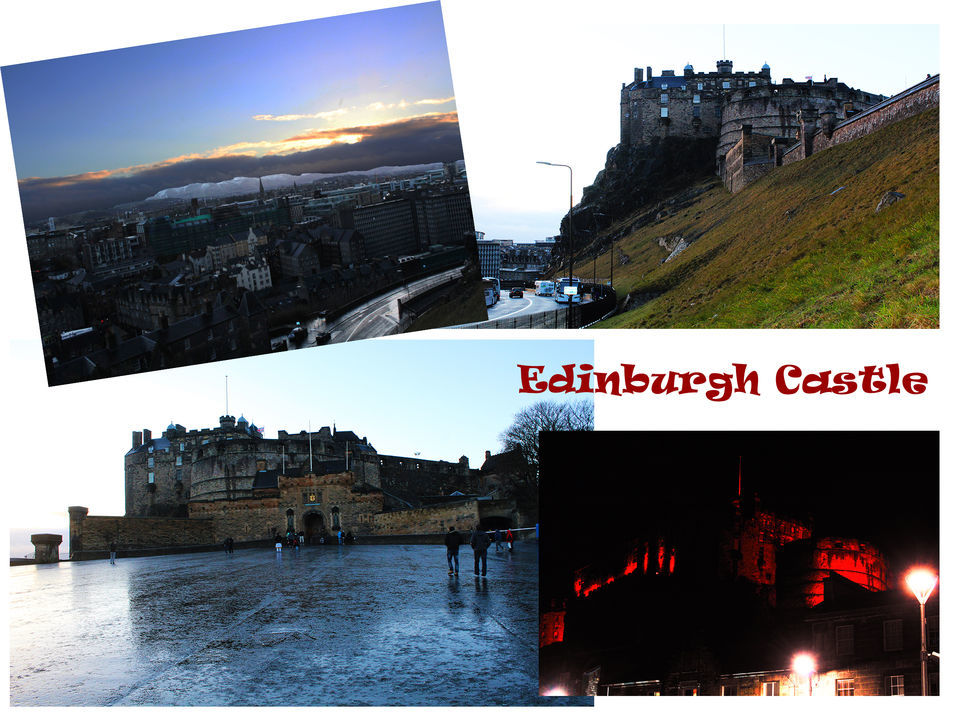 Edinburgh city is not something to be missed if you are planning a UK trip. Edinburgh’s architecture continues to inspire, from the medieval tenements of the Old Town to the ultra-modern Scottish Parliament. One of the best ways to explore the city’s architecture is being part of a walking tour.

We didn't have much plans for the day. After Scottish breakfast, we headed towards Halifax. This time, we took the alternate route, A1 via NewCastle upon Tyne along the North East coast. There were numerous castles on the way. We passed through many valleys, loch banks and fishing villages. 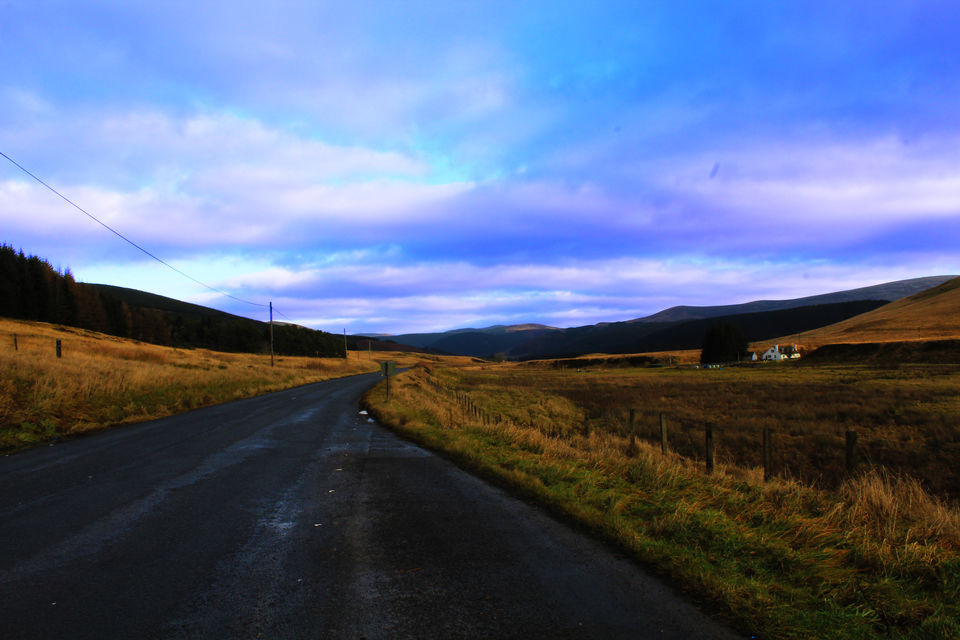 Halted at many places and took loads of photos. By 6 PM, we reached Halifax, jumped into the bed and were fast asleep.

Lin Yutang's travel quote "No one realizes how beautiful it is to travel until he comes home and rests his head on his old, familiar pillow" is very much true.