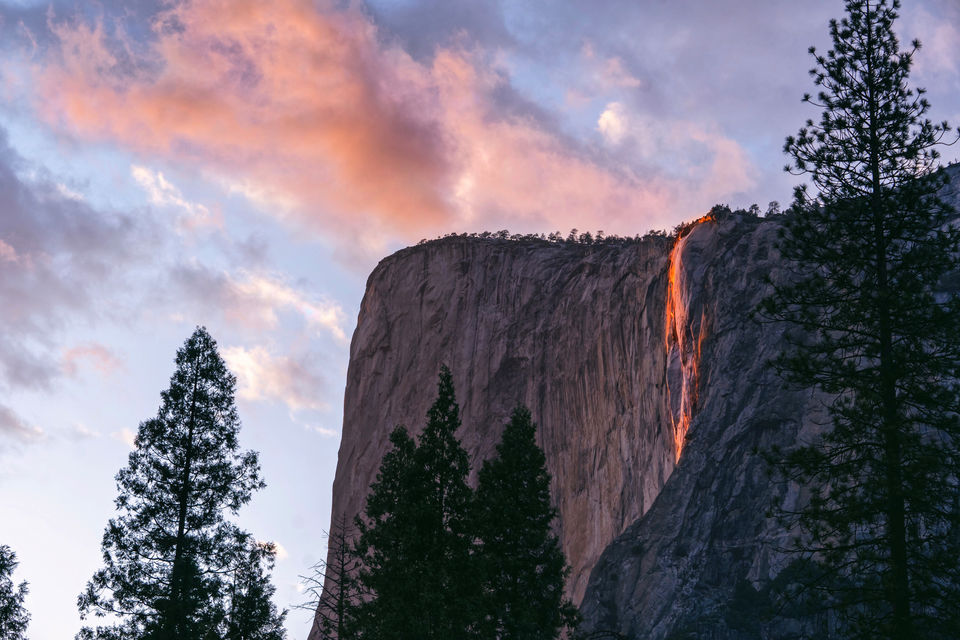 Being curious traveler, I have been fortunate enough to witness events all around the world that could be simply described as magical, unforgettable, and mesmerizing. After watching Aurora Borealis dancing in front of my eyes in Alaska, the Firefall in Yosemite National Park was at the top of my list. Now you must be thinking “What exactly is the “Firefall”? So let’s get to that first.

“Firefall” is the magical phenomenon that happens once in a year, creating illusion at the Yosemite National Park, California. It comes to life when the setting sun causes light to hit the waterfall at just the right angle and it looks like a flowing lava. It takes four key ingredients to form this Firefall. The first is a decent amount of snowfall throughout the winter in Yosemite valley which provides the water necessary to create Horsetail Fall. Second is during the last two weeks of February when the sun perfectly aligns, temperatures must be above freezing to help with the melting of the snow. Third thing is clouds to need to cooperate as well. Finally, the last factor involved is wind, it needs to flow in right direction to create correct amount of mist. If all these factors decide to cooperate then this magical phenomenon come to life.

Unfortunately there’s not enough snow melt this year, so waterfall is completely dry. Against popular advice, we still went and chased the firefall.

It was foggy, cold and raining the entire day and we had given up the hopes of seeing even lit up El Capitan. Somehow as sunset time was approaching and hundreds of people were waiting for that one ray of sunshine, magically clouds parted and sun came out at the right moment. Even though there wasn’t any water in the fall, we were so grateful to be able to see this magnificent sight.

I would definitely go back next year for the actual firefall, till then here are some of my shots from this year.