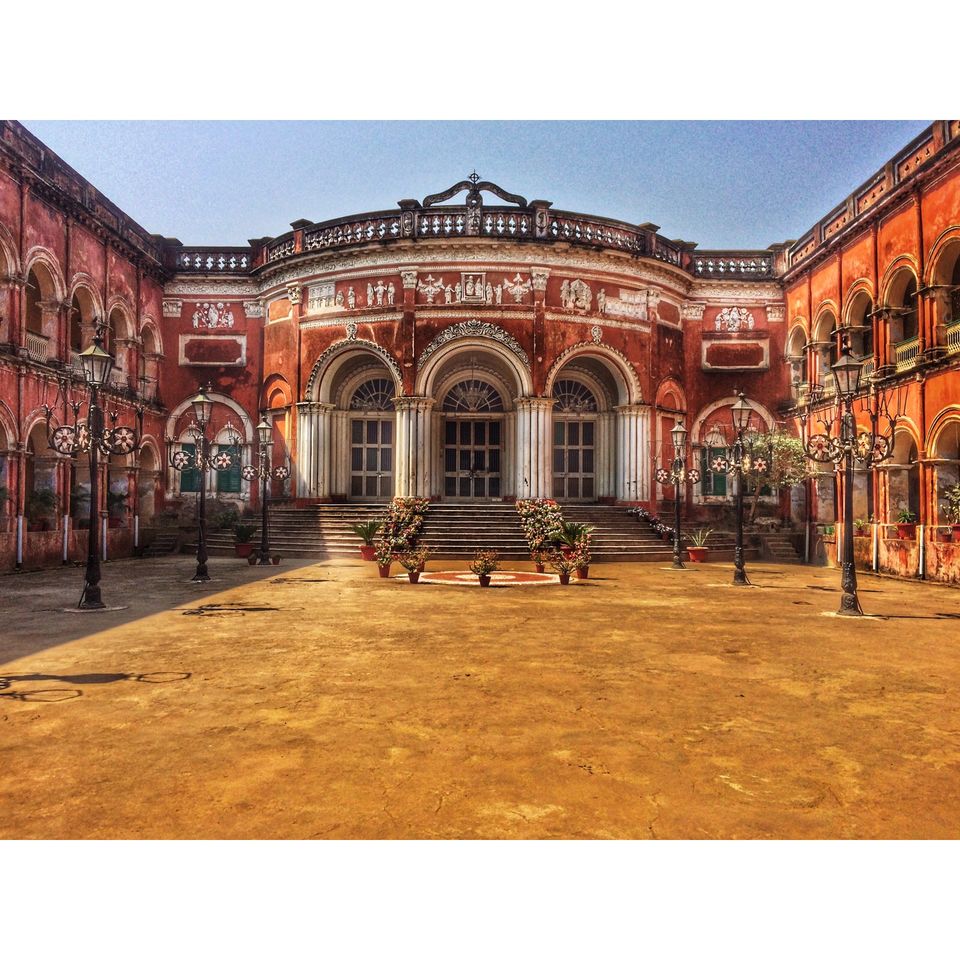 Rajbari, literally meaning brick and lime palace, was built in 1766 by the Kundu family who supposedly descended from the Bargis, the dreaded Maratha clan who invaded and looted Bengal time and again annually for a decade (1740s to 1750s). They were originally, “Kundaan” since the time they settled, they embrace local culture and through word of mouth, it has become “Kundu”. In the present day, you can experience living in a heritage house.

A few steps from Kalyani across the river Ganges you will wade into the heritage Hooghly district. People from different places came and settled here. You will find the monuments of the Portugese colonies in Bandel. Apart from that, you will find of Dutch, French and Greeks. There are of regional races & cultures too. Jains adored the place and even Pathans admired and left their traces here.

This heritage mansion is in village Itachuna, originally known as Danga. After the downfall of Mughal era, after the death of Aurangageb, Marathas became powerful. Many a times they used to attack BengalBihar & Orissa. The erect from Singur to Arra, Purulia witnessed the threat of Maratha warriors locally called Bargis centuries back. used to come, loot and collect taxes. However, many of them never left Bengal and began to settle here embracing local culture. A sect entitled “Kundaan” settled in the remote village of Hooghly now known as Itachuna. They amassed huge wealth and property by their wit and strength. Subsequently they became powerful /rajas of the locality. they lost their original identity of , it turned to Bengali title Kundu.. They cultivated Bengali culture, Bengali cuisines, Bengali language and local deities. They became , guide and protector of local people here. They were pious and liberal. Their towards local people became a folklore even heard at the nook and corners of Itachuna. Still, people in the village put them on a pedestal.

The palace was made by (bricks) and lime () and hence it was called Itachuna Rajbari. The majestic, splendid architecture and structure is it is about 250 years old. Currently, a part of it is being used as heritage-stay.

The Vishnu temple within the palace is another attraction of the palace. Still now the deity is worshipped.

The caretaker of this place was guiding me to the kept for visitors. When I was exploring the huge property, its nooks and crannies and the rustic stairways at times I thought I was lost and couldn’t remember the pathways, but I was lost for a better reason, I was blissfully disconnected from the urban jungle and digital connectivity. The palace is a self-contained entity. There are rooms for royal families. There are for amusement and dances. The visiting room has a magnificent outlook

A night stay here will certainly refresh your mind. If you spend seeing the village from the roof, you will stumble upon delightful oddities, when the afternoon gives way to dusk.

This place is just the perfect getaway if you are looking for a quiet, peaceful and scenic weekend. Away from everyday chaos this is the place to just be. The areas around the Rajbari is green and there are quite a few water bodies around it and one within it. It is a perfect place to rest, recuperate, and spend time enjoying nature, good food, and music! Yes, music of the flute variety! There is a person who comes in every morning and evening and he plays the flute. It was a lovely experience and somehow added to the ambience!

In the evening I was provided a tour of the Rajbari and the areas around it.

To sum up, it was a great experience to spend a weekend indulging in and gorging on delicious Bengali food.

The rooms are pretty good. The experience of staying in a house over 300 years old with so much of history was quite something! At present, mud huts have been built near the and people can experience night stay even there. The mud hut each named after different flowers.

The food was excellent. They served Bengali food and the menu is fixed. You can choose between veg and non-veg food. The spread was very good. If you want to taste authentic Bengali cuisine this could be the perfect place and setting to experience it. You get to experience eating on old traditional dinnerwares and feel royal.

If you live in Kolkata and don’t know where to go next weekend, try to visit Itachuna. For more details you can visit the website of the Itachuna Rajbari: http://www.itachunarajbari.com/

Do not visit Itachuna Rajbari if you are looking for hotel-like amenities and modern comforts.

Come visit if you want to meet characters lost in a time gone by in a sleepy little town that houses a mansion full of charm for those that seek it.