Lepakshi (Every Stone Has a Story) 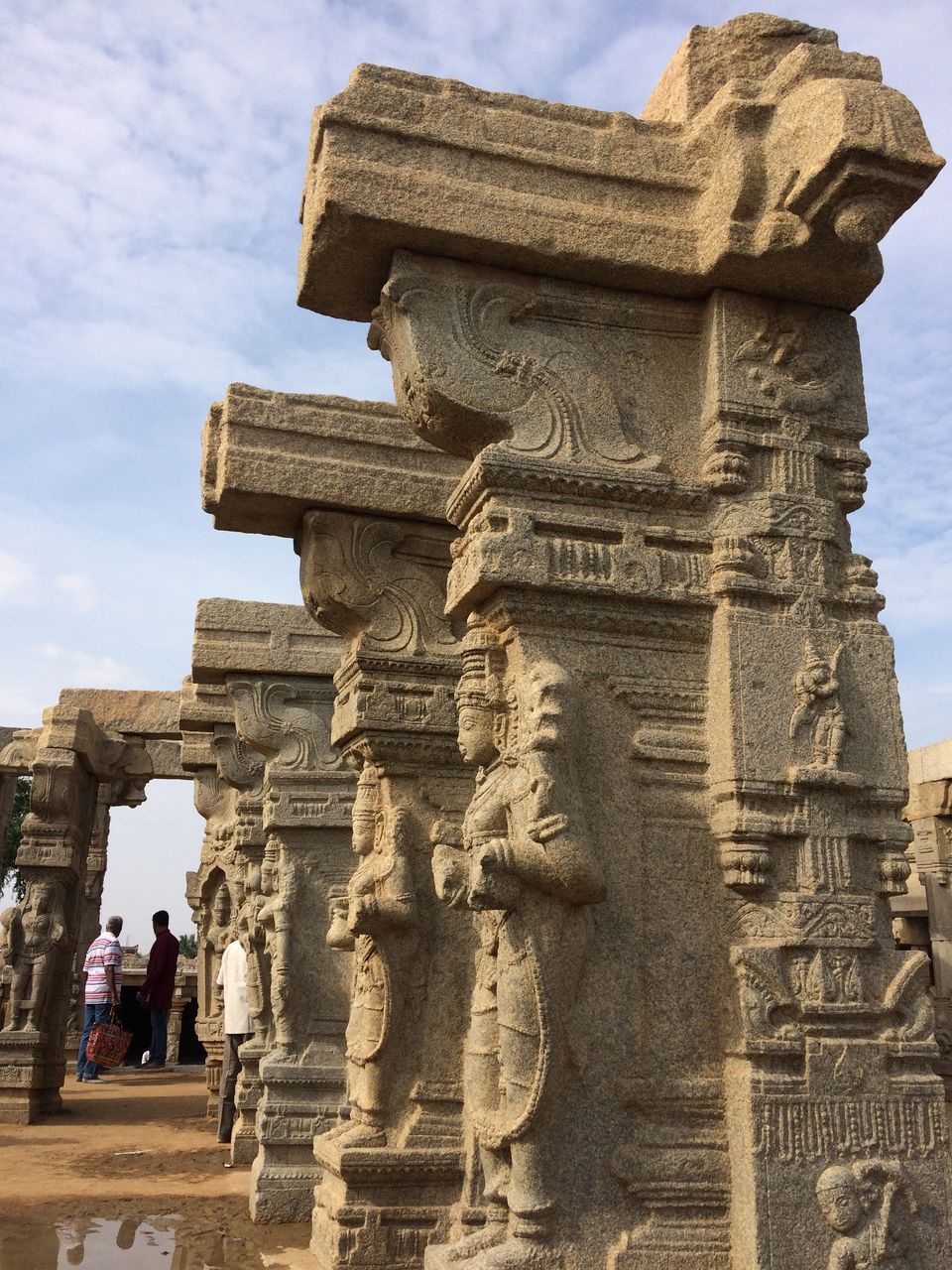 Lepakshi is a small village located in the Anantapur District, in Andhra Pradesh which is around 135 KM from Bangalore. In fact, it is very near to Karnataka and Andhra Pradesh border. The most preferred and also the best route to take is NH7, Bangalore-Hyderabad highway.

After crossing the Karnataka-Andhra Pradesh border keep looking for APTDC restaurant and sign board directing towards Lepakshi. You can find these around at a distance of 3-4 Km from the border point. From there you should take a left turn which goes to Lepakshi. Starting here temple will be of around 18 KM. Alternatively, one can take a bus or a train to Hindupur and then travel to Lepakshi which is 14 km away from Hindupur.

The historic town of Lepakshi has been connected with an occurring of the Indian epic of Ramayana. According to the Valmiki's Ramayana, when Ram accompanied by Hanuman, met the dying Jatayu, they helped him attain moksha by uttering the words "Le Pakshi," which means "Rise, bird". Hence the name, Lepakshi.

1 KM before the temple there is an enormous Nandi statue, real fascination of Lepakshi. As said, it is the biggest Nandi statue in India. A very nice park is built up around this statue and is very well maintained. At 27ft long and 15ft in stature, it is a rock structure, supposedly India's greatest solid Nandi. Its grand size and the perfectly proportioned body make it a popular photo-op with visitors. The whole area has been developed in the form of a park, around this Nandi. 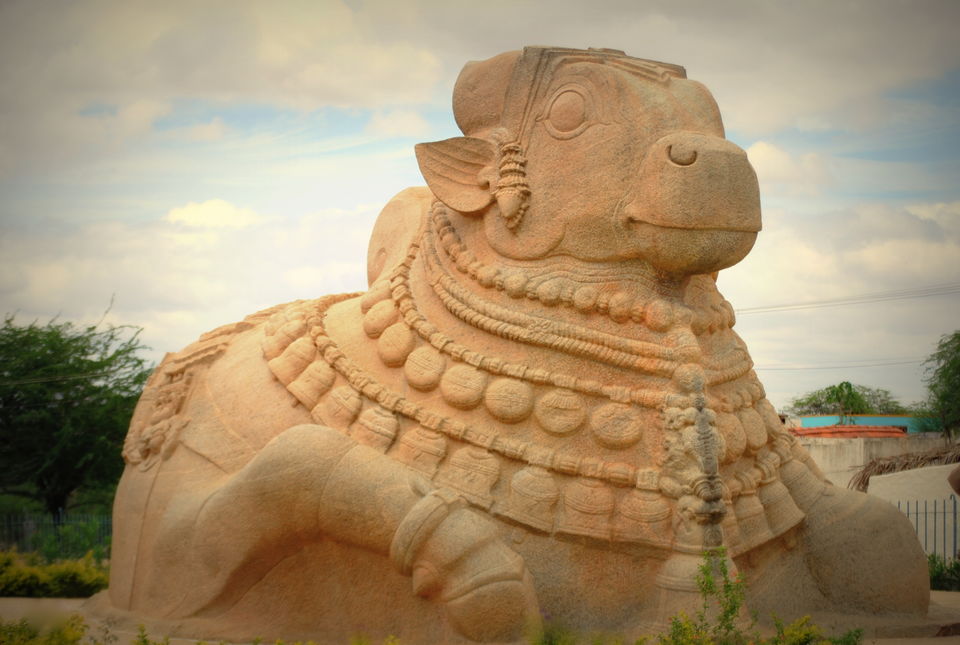 As soon as you step into the temple premise, it will start tracing the impact of its enriched cultural and ancient engineering marvel. It is a truly splendid creation which compelled me to think about the master skill posed by the engineers, architects and whoever else were involved in creating this masterpiece. The various deity of God and Goddess have been carved out on the walls and pillars of the temple. You can see different models all around in the temple, all made of stone and some are created on dividers and columns. Another attraction is roof painting spread all over on the roof of the temple depicting glorious ancient Indian culture and traditions. 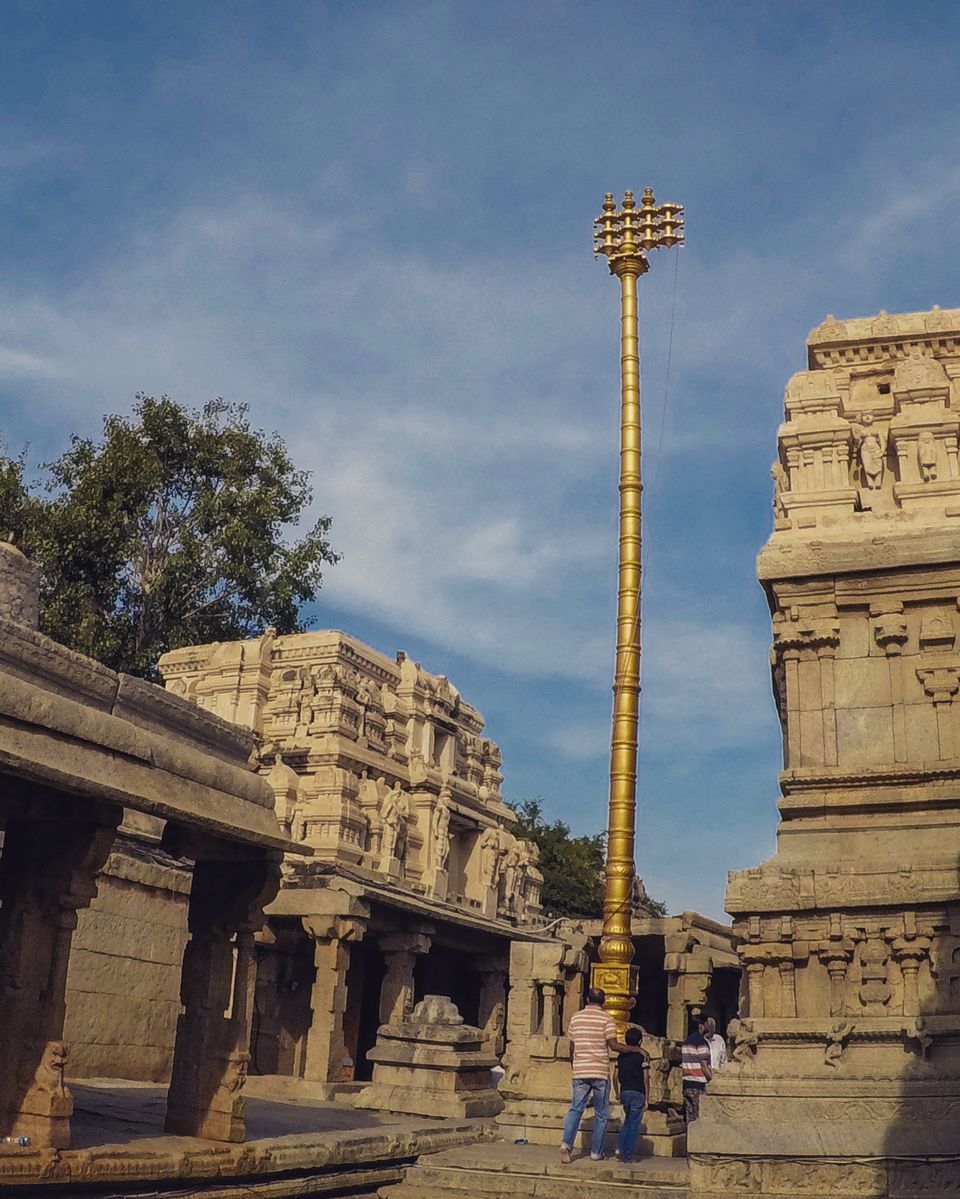 Natya Mandapa additionally called as Ranga Mandapa, which is famous as the 100-pillared dance hall, is the most remarkable piece of this temple. It has carved columns, figures, and artistic creations that delineate the mind-boggling abilities of the designers of the Vijayanagara period. The pillars of the mandapa will mesmerize you with life-like models of divine beings and goddesses playing melodic instruments. You can see Shiva performing Nataraja Tandava, Brahma playing the drum, Narada on Tamburu, nymphs in dancing postures and many heavenly artists playing drums and creating a dream world of divine melodies. The ceiling of the hall is covered with beautiful mural paintings depicting the scenes from Ramayana, Mahabharata and other scriptures. 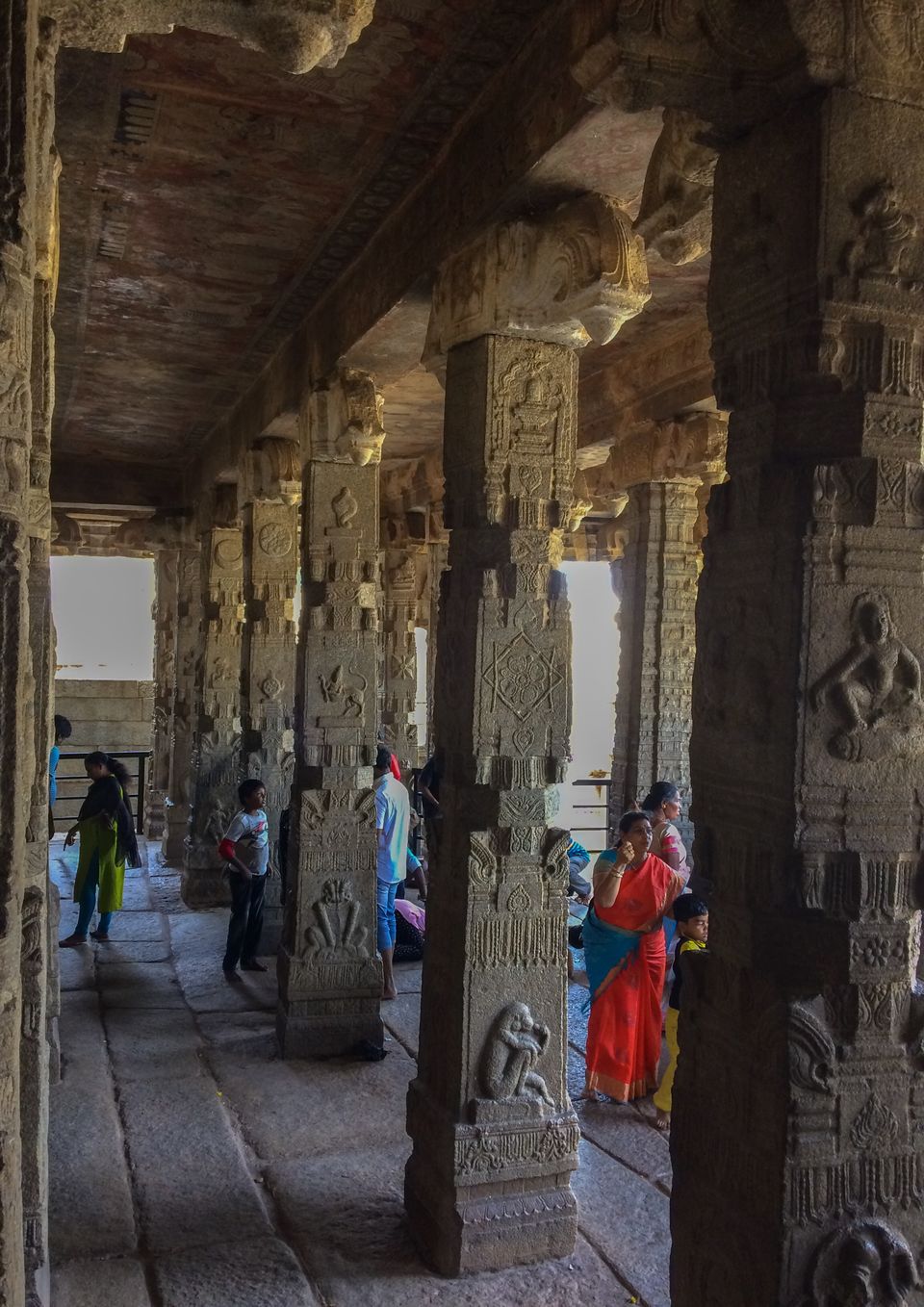 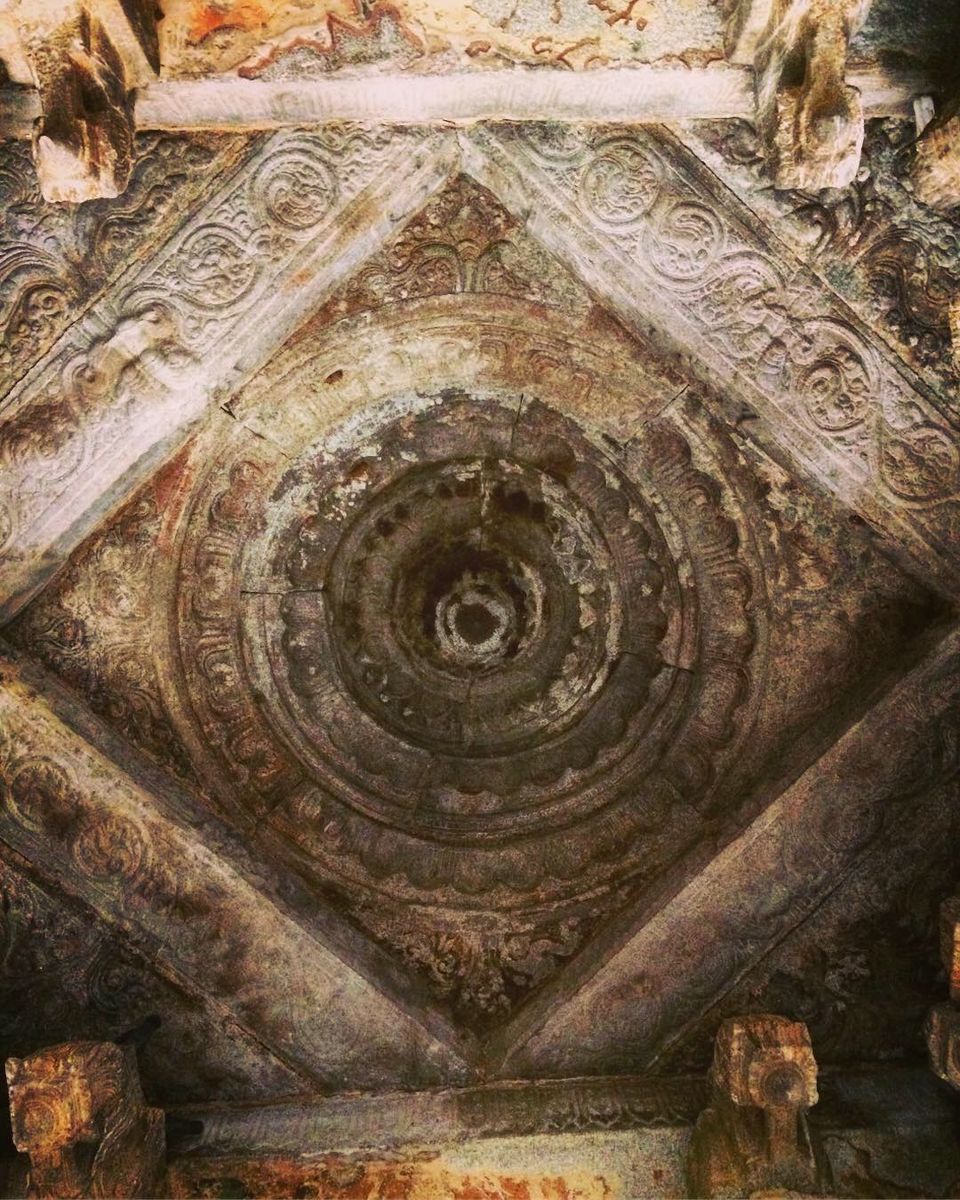 As you stroll through the temple, you could see a column which does not lay on the ground completely. It is said that in the British time, a British designer tried to move it in a fruitless endeavor to reveal the mystery. In any case, after moving the column, the entire structure of the temple began shaking (because of the sort of offset with which the columns are set). There are around 70 columns at this impressive sixteenth-century temple of stone in Vijayanagar style, yet this one is the best known and a tribute to the designing virtuoso of old and medieval India's temple developers. A paper or a slight bit of material can be passed from underneath the column and it turns out completely unhindered at the opposite end. 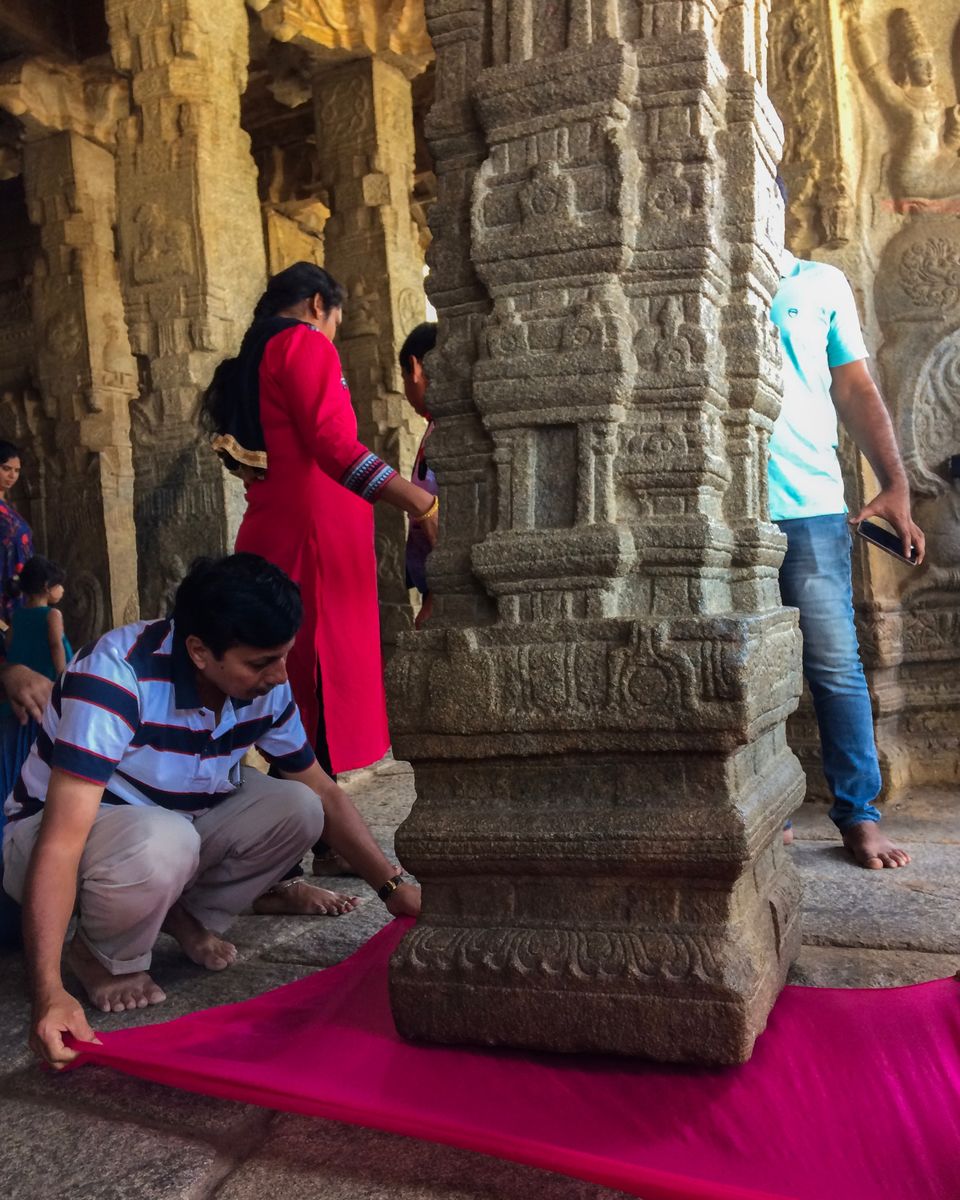 Solid snake structure in Lepakshi is the Largest Monolithic Nagalinga in India. It is said that, this Nagalinga was built in only 1 hour while their mom was preparing lunch for them. At the point when mother completed the process of cooking she saw this tremendous figure and couldn't accept what she was seeing. 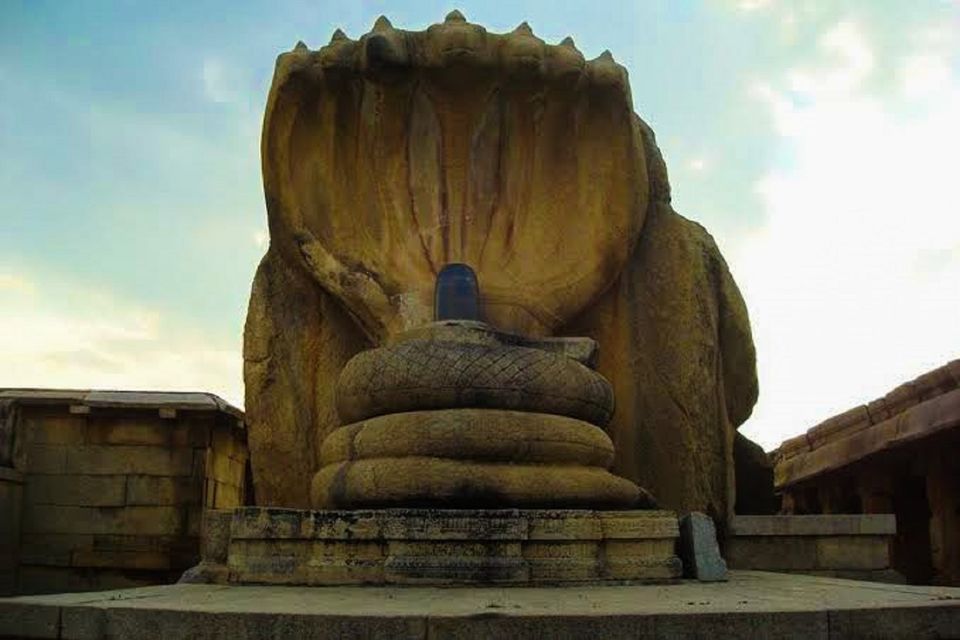 Kalyana Mandapa an open structure behind the temple has 38 columns with mind-boggling carvings of a few sages, divine beings, Dhanwanthari, and the 8 Digpalakas. It is trusted that Shiva and Parvati got married at this mandapa. Wonderful carvings depicting the marriage of Shiva and Parvati can be seen on the pillars. Construction of this mandapa seems to be unfinished and again there is a legend behind it. Virupanna, the royal treasurer was claimed of deceiving the ruler by using the assets from the treasury without the King's authorization and the ruler requested Virupanna to be blinded. However, unable to bear the false accusation, Virupanna blinded himself and tossed his eyes on the walls. Two red spots still observed on the wall close to the Kalyana Mandapa are said to be the imprints left by his bleeding eye.

After crossing the Kalyan Mandapa, you will arrive at a huge footprint on the temple floor as somebody stepped with strength on the floor. This footprint is believed to be of Goddess Sita. Interestingly, this footprint is always wet. You can see the water from underneath constantly sipping and washing this foot. Although, the source of this water is unknown. However, it is believed that since it is the footstep of the Goddess, the water seems mystically as an indication of regard to her. Also, you can attempt to dry or crash the water, it gradually leaks once more into the right spot. 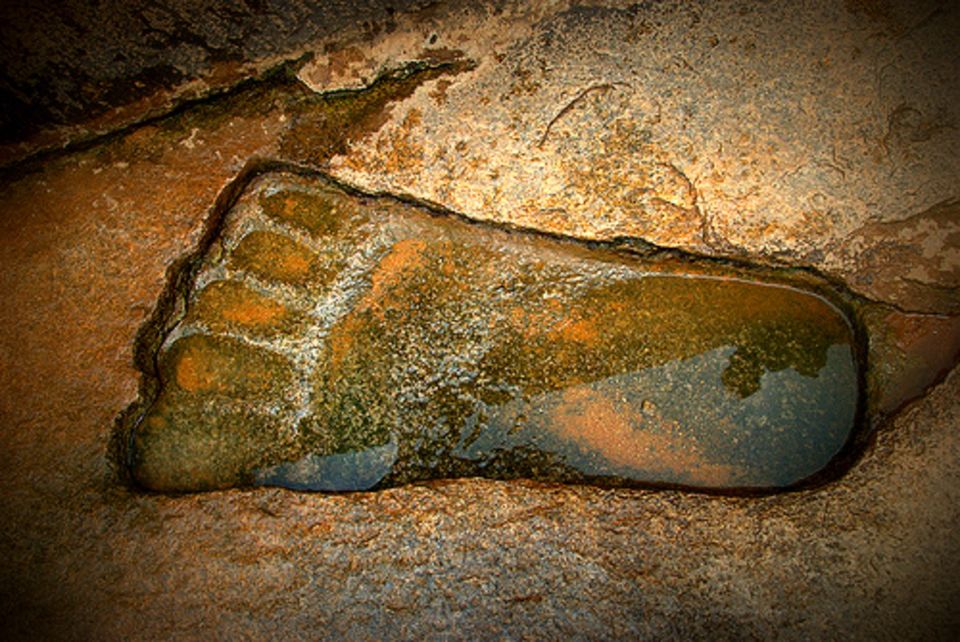