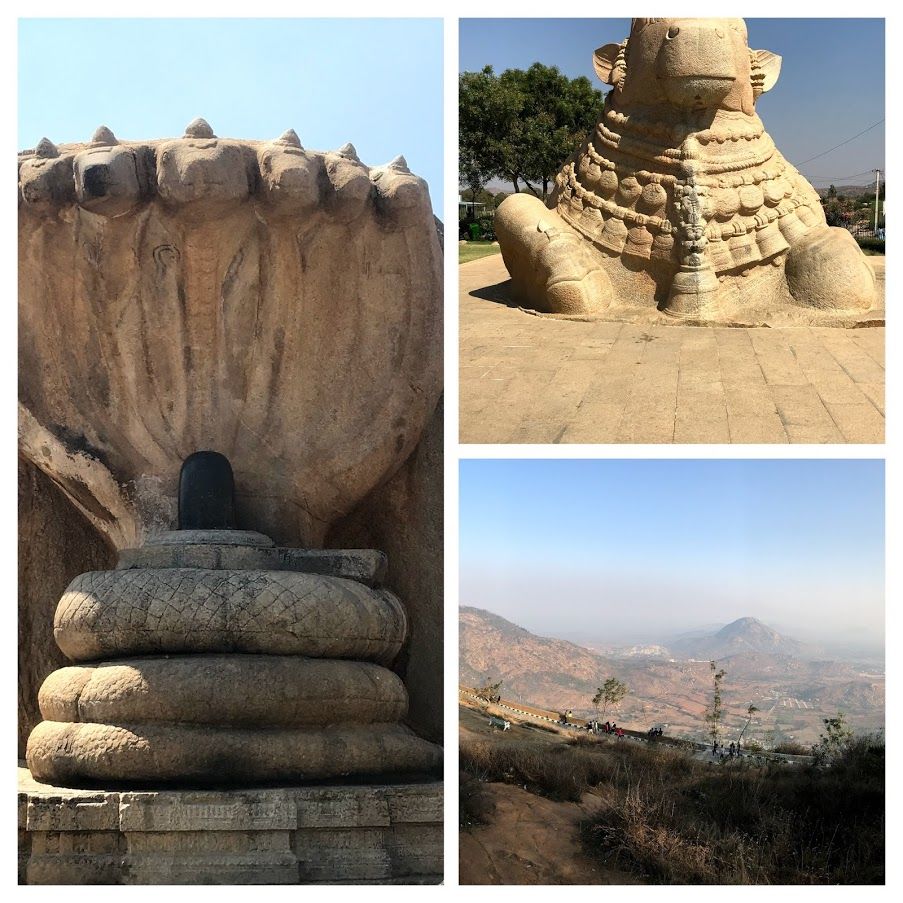 Hello, I am writing this article to share about my one day trip to Nandi Hills[Karnataka] and Lepakshi[Andhra Pradesh].

We have a plan to visit these two places since long time and finally visited last week. We have booked our tickets and planned to get down in Yelahanka station. The reason for getting down in Yelahanka was due to more transit options. We can get down in Gauribidanur which was near to Nandi Hills but there are very less travel options during midnight.

We reached Yelahanka by 03:30 AM and hired a taxi to cover these two places and drop us at Hindupur which was 15 Kms from the Lepakshi. Headed towards Nandi Hills to experience a Sun rise.

One of the popular hill station near Bengaluru and perfect getaway to most of the nature lovers. Most of the people visit this place to experience a early morning breezes and beautiful sun rise. We have started at 04:00 AM from Yelahanka station and reached Nandi Hills by 05:00 AM. But the entry gate was opened at 05:45 AM and reached to the hilltop by 06:15 AM. Since it was Sunday, long queues to get the entrance ticket. If you're going on 4 wheeler, they can go till the hill top.

The hill was surrounded with a pathway where tourists can roam around the hill. There are few view points where they can enjoy beautiful landscapes and hills. The main thing we can feel here is the clouds, they will pass above from the head, finally reached near to the view point to experience sun rise, enjoyed sun rise for some time and then spent few minutes to roam around the hill. Karnataka tourism providing accommodation on the hill but there are only limited rooms. If anyone wants to stay, they can book accommodation prior to their journey.

Few attractions on the hill are Step Well and Guest houses.

After experienced the beautiful sun rise, we have checked for a hotel to fresh-up, luckily we got one hotel downhill for decent price. We have freshen-up and had nice breakfast on roadside. People can see so many farmers selling Black and Green grapes roadside for very decent price and grapes are also very tasty. After a good breakfast, we headed towards Lepakshi which was close to 90 Kms from Nandi Hills and reached Lepakshi by 12:00 PM.

One of the famous pilgrim center and an archaeological site in the state of Andhrapradesh. The site came to prominence due to one of the major incident happened in the epic Ramayana. A bird called Jatayuvu saw the daemon Ravana while taking Sita to Lanka and attempted to stop him but Ravana cut one of the wing of this bird and took Sita to Lanka. Goddess Sita lands her feet on the ground, after her feet touched the ground, small amount water started flowing in the foot mark sized portion. Later Goddess Sita asked the bird to drink the water to survive and requested to let God Rama the incident happened. While searching for Goddess Sita, Lord Rama found Jatayuvu and asked why she was injured like this. Later Jatayuvu said that the Ravana attacked her and caused this injury and also she said Sita requested her to tell this incident. Lord Rama asked the Bird to rise up by saying "Le [get up] Pakshi[bird]" which was came to prominence as "Lepakshi".

The main attractions in the Lepakshi are Gigantic Monolithic statue of the Bull[Nandi] [27ft in length and 15ft in height], it is a colossal structure, reputedly India’s biggest monolithic Nandi carved beautifully with ornaments and sidelines.

Another attraction in this place is Lord Veeerabhadra Temple built by the Vijayanagara empire rulers Virupanna and Veeranna in 16th century. This temple has very beautiful sculptures carved on a hill called Kurmashila or the Tortoise hill, as it is said to resemble a tortoise a rest.. The temple has no foundation and constructed with the stones placing one on another. The temple dedicated to Lord Veerabhadra the fiery god created by Shiva in his rage after the Daksha Yagna and the immolation of Parvathi. In the Grabhagriha, we can few deities of Lord Shiva and Parvathi along with Bhadrakali.

We can see Lord Shiva along with Goddess Parvathi watching the dance of great dancer Rambha [one of the great dancers of Indra Lokha] with Brungi[Dance teacher of Rambha], Nandi[Vehicle of Lord Shiva], Lord Surya, Lord Tumbura, Pancha Mukha Bhrama, Vasista Maha muni etc.We can find beautiful Lotus flower carved on the Roof above the dancing hall.

After Goddess Sati Devi[Goddess Parvathi] died after the Daksha Yagna, one day Lord Shiva went to the house of Goddess Parvathi and asked for the Biksha, she came outside and put the rice in the bowl carried by the Lord Shiva. After pouring rice in the bowl, she noticed that the bowl was filling completely, she keep on pouring the bowl without noticing that her clothes were dropped. Due to her indefinite nature of the giving food for the need, Lord Shiva gave her name as Annapoorneswari.

One of the architectural wonders that we may not seen in any part of the world can be seen here in the form of Hanging Pillar. The pillar hanged from the roof without touching the basement . There 70 pillars in the dancing hall and except one pillar remaining all pillars were laid on the basement. As per the history, entire temple was constructed on the support of this pillar.

Once a British engineer tried to explore the reason for this architectural marvel by moving the pillar and noticed that couple of adjacent pillar tops were moved slightly.

We can see the space between the pillar and basement clearly, if we stand beside the steps of the temple which were on the left.

Roofs of the dancing halls decorated with Mural paintings where we can see few incidents of the Hindu Mythology and the people involved in the temple construction.

Once you reach the temple’s outer enclosure, you will see a mammoth Ganesha carved in the stone and leaning against a rock.Beside there was a Naga with three coils and seven hoods in-front of the cooking hall. It forms a sheltering canopy over a black granite Shivalingam. It’s reckoned by many as the largest Nagalinga in India. As per the epic, the Nagalingha carved in very less amount of time i.e. when the sculptors of the temple were waiting for her mother to cook the food for their lunch, they carved this Nagalinga. Later, mother of the Sculptors amused with the structure carved by her sons, she intentionally kept a back mark but it was damaged the beauty of the sculpture. After that, the sculptors decided not to offer any prayers to this Nagalingha and same has been continued till now.

But interesting fact that, this Nagalingha has been visible if we stand beside the Nandi Statue which was 200 meters away from the temple.

In between these two sculptures, we can find three sculptures depicting the tale of the SriKalahasti[One of the Panchabootha Lingas].

This is one of the main attraction outside the temple complex, which renowned as Incomplete Kalyana Mandapam[Ashampurti Kalayana Mandapam]. This wedding hall constructed based on the characters involved in the wedding ceremony of Lord Shiva and Goddess Parvathi.

Pillars in the entrance carved with the sculptures of the different saints and Lord Bhrama which was in standing posture welcoming the guests to the wedding.

There is a corridor located near to the wedding hall with 36 Pillars. Each pillar carved beautifully with unique designs on their sides.In total, we can find 144 unique designs in that corridor. These designs will be considered for printing saree borders.

After visiting all these places, we headed towards Hindupur for Lunch and returned to Hyderabad.