A visit to Golden Temple- “Abode of God” 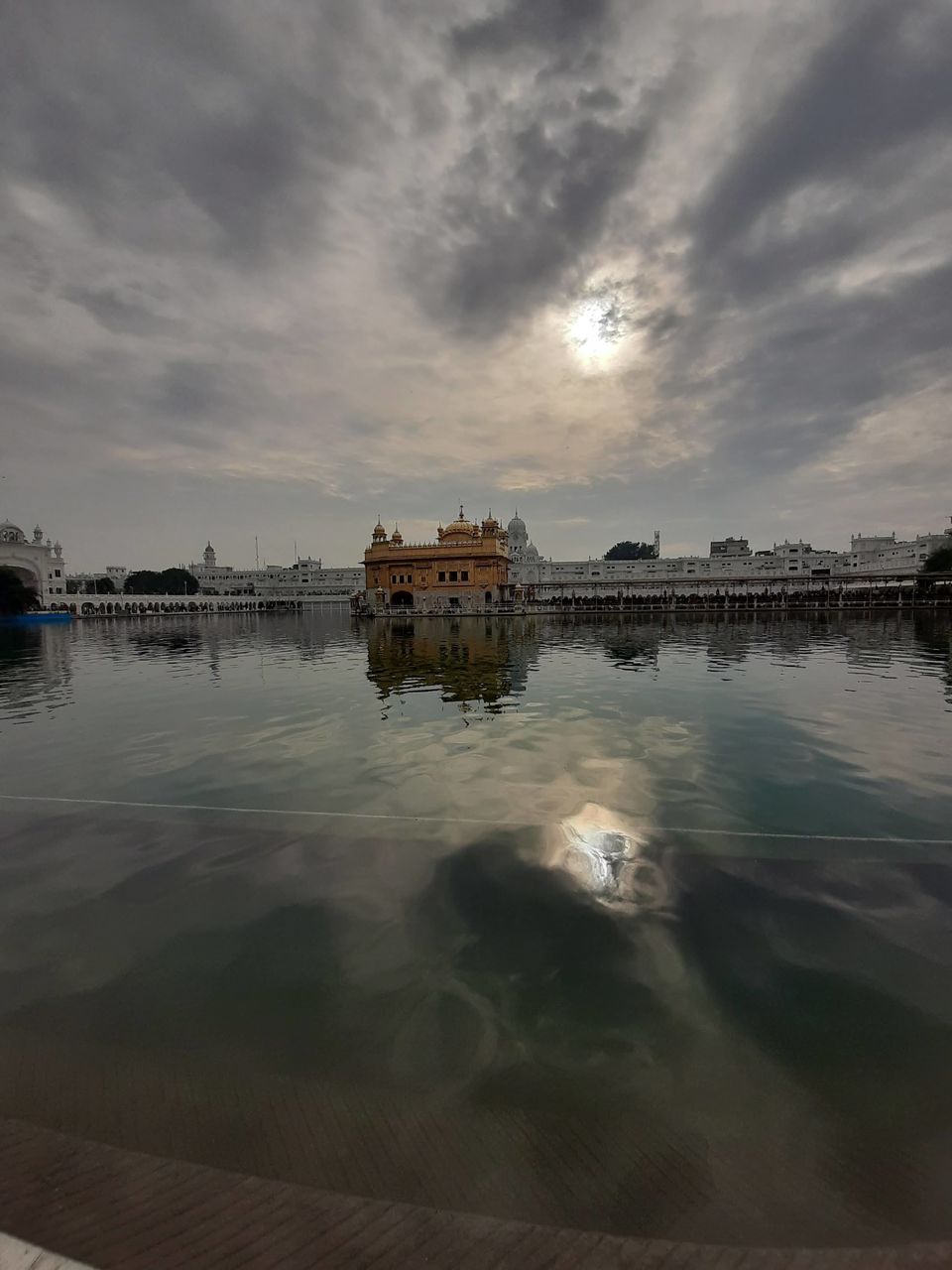 Amritsar is world-famous for the beautiful and highly revered Golden Temple or Sri Harmandir Sahib, one of the most prominent spiritual sites in the country. The temple is a two-storied structure with its top half covered in almost 400 kg of pure gold leaf, the rest of the temple complex is built in white marble, inlaid with precious and semi-precious colorful stones. The grand temple complex is awe-inspiring in its size.

One must cover one’s head and remove his/her footwear before entering the Golden Temple, as a mark of respect. As one listens to the beautiful notes of gurbani (spiritual songs), the serene spirituality of the temple soothes the soul. One can also partake of the free meal that is offered here to around 20,000 people every day at the Guru Ka Langar (community meal), regardless of caste, creed or gender. The entire process is managed by volunteers and is one of the most humbling experiences you can have.

The architecture of the temple is spectacular and a 67 ft. square of marble makes up the base of the structure. The glistening temple is surrounded by Amrit Sarovar (pool of nectar), whose waters are said to have healing powers. One can also watch colorful fish swim in the lake’s clear blue waters as devotees take a dip in it. The temple has been designed keeping in mind the basic tenets of Sikhism that advocate universal brotherhood and all-inclusive ethos. Thus, it is accessible from all directions.

The main entrance boasts an imposing clock tower, which also has a Central Sikh Museum. From here, one can sight spectacular views of the shrine and its elegant silhouette in the Amrit Sarovar. A second entry is through the silver doors of the gorgeously embellished Darshani Deori, which leads onto the causeway that links the sanctum sanctorum with the Parikrama, the marbled surface surrounding the sarovar.

In the north-west corner of the complex is the Jubi tree, which is believed to possess special powers. It is said to have been planted 450 years ago by the Golden Temple’s first high priest, Baba Buddha. During the day, the holy book of the Sikhs – the Granth Sahib – is kept inside the temple. At night, it is taken to the Akal Takth or Eternal Throne, that houses ancient weaponry earlier used by Sikh warriors. There are other famous temples surrounding Sri Harmandir Sahib, including the Durgiana Temple as well as a beautiful garden and the tower of Baba Atal. It is said that sage Valmiki wrote the epic Ramayana in this sacred place. It was a great spiritual experience to just sit back, pray and serve in Langar.

Well, everyone knows the history. Yet, let’s revisit it. Jallianwala Bagh in Amritsar is the site of one of the biggest tragedies in Indian history. On April 13, 1919, this park, spread across 7 acres, saw about 2,000 Indians indiscriminately shot dead at the hands of British soldiers lead by General O’Dyer. This incident is known as the Jallianwala Bagh massacre or the Amritsar massacre. Historical records tell that on the fateful day of the Punjabi harvest festival of Baisakhi, 15,000 to 20,000 people had gathered to celebrate. Apart from this, some people had also come together to hold a peaceful demonstration against the repressive Rowlatt Act that provided for stricter control of the press, arrests without warrant and indefinite detention without trial. The British got wind of it and surrounded the park armed with rifles. Then, on General O’Dyer’s orders, shots were fired indiscriminately over men, women and children. The wall near the end of the park still holds the marks of around 36 bullets. After the shooting, several dead bodies had to be taken out of the well which people jumped into to avoid being shot. A memorial is built here to commemorate the 2,000 Indians who were killed or wounded. The story of this appalling massacre is told in the Martyr’s Gallery at the site. The incident was instrumental in changing the course of the Indian freedom struggle. It fueled anger among people, leading to the Non-cooperation Movement of 1920-22. After the incident, Mahatma Gandhi declared, “The impossible men of India shall rise and liberate their motherland.”

“This disproportionate severity of punishment inflicted upon the unfortunate people and method of carrying it out is without parallel in the history of civilised govt.” wrote Rabindranath Tagore, a noble laureate, while returning his knighthood to the British. I believe it is a must-visit site while going to Amritsar.

The Wagah Border is an army outpost on the Indian and Pakistani border, lying between the cities of Amritsar and Lahore (Pakistan). It is around 28 km from Amritsar and is one of the main access points overland to the neighbouring country of Pakistan. Among its many buildings, roads and barriers, one can witness the impressive Beating the Retreat ceremony, held here every day. During the ceremony, an infantryman stands at attention on both sides of the gate.

Then, the gates are flung open and the two soldiers, one from both India and Pakistan, approach each other, mimic anger and exchange fierce looks. After this, they shake hands and begin to lower both the Indian and the Pakistani flags on either side of the gate simultaneously. People from both countries gather to witness the impressive proceedings. On the Indian side of the border stands a huge gate with an encryption reading 'Swarn Jayanti Dwar' (Golden Jubilee Gate) and one can enjoy a panoramic view of the Wagah Border from here. The Lowering the Flag Ceremony is a must-see in Amritsar as the high-decibel spectacle leaves one in awe. As night approaches, lights are switched on to mark the end of the day. There is patriotic fervor in the air as people start singing the National Anthem and applauding the ceremony. The energy makes for a rare display of pride in one’s country and nationality.