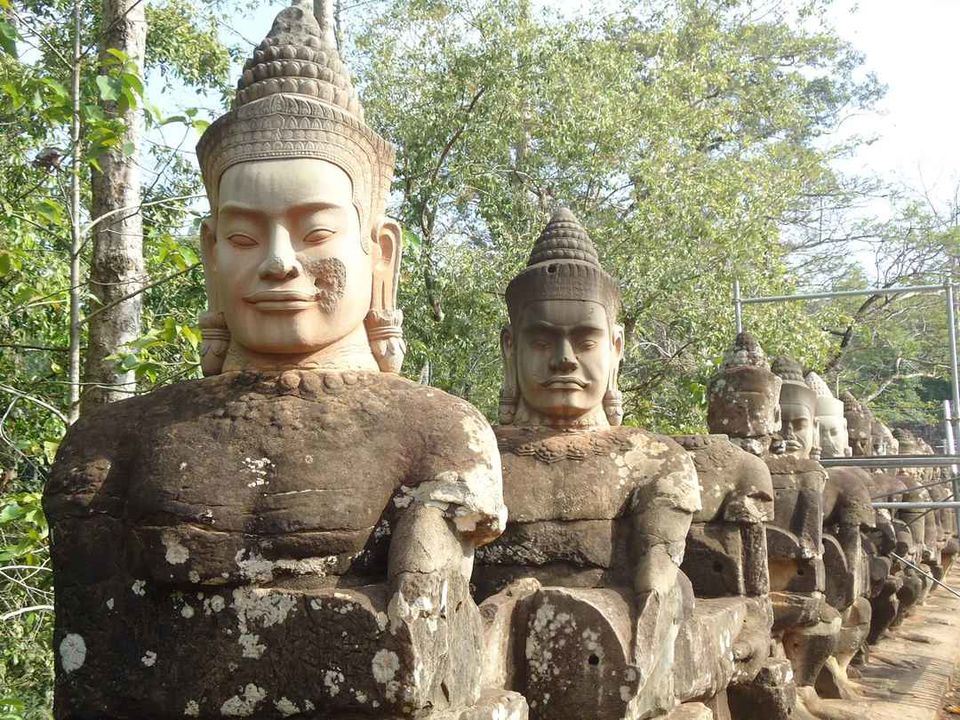 1st June 2013.Bangkok.Our Cambodia Angkor Air K6 701flight from Bangkok's Suvarnabhumi Airport was a very small carrier,probably a 40 seater plane.I had never before flown such a small carrier.After going through all the immigration formalities and security check we were finally fastened to our seats in Air angor ready to depart for Siem Reap,Cambodia.An unknown thrill gripped the mind.In 1 hr 05 minitues time we would hopefully touch down in the Khamer land,famous for its Angkor Wat Temple Complex,the largest Hindu temple complex in the world of the ancient times.The plane took off just in time and by my watch it was 02.55 PM.I had had the opportunity of flying in an aeroplane several times before but this time it was a very very different experience.Most of the passengers were europeans.A photographer from Delhi with his cameras and other gears ,Kaushik and I were the only three Indian souls amidsts all those white skinned people.We were flying low and I could have a bird's eye view of the City of Bangkok,its Skyscrapers and the Chao Phraya river meandering through those mighty structures.Everything was going fine.Refreshments were served by ever smiling Kamboj airhostess.We were having a chat with the Delhi guy who seemed to be a professional photographer and was going to capture the majesty of the Angkor complex with his lenses while we had our eyes to behold.( our cool pic cameras hid themselves in shame in our hand bags).Probably we had flown20 minutes or so after taking off.Suddenly the aircraft started to tremble violently.We were asked by the crew to remain seated fastening our seat belts for we were passing through a turbulence.I had experienced such things in the past and so it did not unnerve me at first but the aircraft started shaking in such a fashion that I felt we would not make it to Cambodia and the plane would crash any moment.The same anxiety was evident in the faces of the fellow passengers.This topsy- turvy continued for at least another 15 minutes at a stretch.My head was reeling and my entrails were churning inside.I kept my eyes closed but my friend Kaushik was less frightened.After that horrific 15 minutes the jerking stopped and I opend my eyes.The plane had survived a crash and we were quite alive to behold the spectacle which lay ahead of us in the land of Khamer.The plane touched down a few minutes late at the non descript Air strip at Siem Reap.Thanking the crew members and the pilot( who had a Rambo look) we climbed down the stairs (really a ladder).Then we walked towards the exit to complete our immigration and custom check.We were without a pre approved visa and so we were asked to submit our passports for " Visa on arrival".Within 20 minutes the passport got stamped with a 25 USD Visa on arrival.Then we queued for immigration and custom clearance.The immigration officer smiled at me and asked my nationality.Then he murmured something which at first I could not make out. Kaushik who was standing in a separate counter in another queue came to my rescue.He told me that he was asking for a 'tip'.I was taken aback.I never expected that the cambodian officials would be corrupt.I quickly asked Kaushik to give me a hundred rupees Indian currency.At first he would not take it and he wanted the blue currency.I told him frankly that we were budget travellers and did not have much money.Then he accepted the Hundred rupees note and asked me how many dollars it would amount to. Without thinking anything I said 10 .He seemed to be confused and then stamped my passport with a broad smile.We finally made it.We stepped out of the air strip.The sun was peeping through the clouds and the radiant hue of the afternoon sun greeted us to the antique land of the Apsaras!( To be continued)