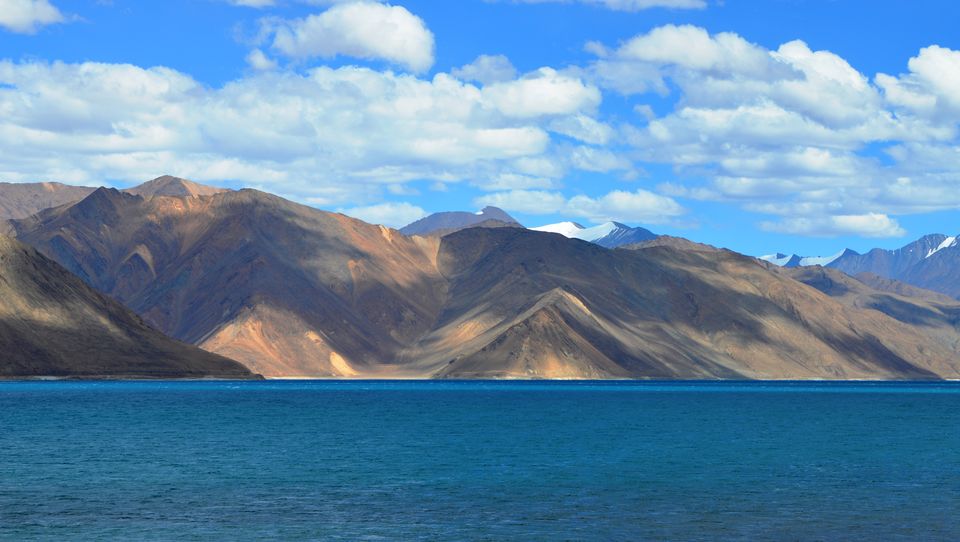 Well to say Pangong Tso was made famous by Bollywood actor Aamir Khan in his movie 3 IDIOTS. Don’t we all recall the final scene wherein actors Aamir Khan & Kareena Kapoor confessed their love on the banks of a beautiful lake & Kapoor drove a yellow scooter?

Post completion of 7 hours drive from Nubra Valley; negotiating an extremely rough hilly terrain once we stepped onto the banks of the lake. I was mesmerized by its sheer beauty; as an afterthought I would be disparaging the location if I say that a movie made Pangong Tso famous rather it is the other way ‘round. Isn’t it the picturesque locale which MAKES a movie?

The panoramic view of crystal clear water commands attention of the viewer. It’s simply majestic the lake gracefully flows across the mountains. I sat on the banks of the lake closed my eyes for few seconds and tried to soak in the serenity of the atmosphere.

One would be awestruck by the cyclorama of the surrounding landscape. Majestic Himalayan Range, tents at the foothills of the mountain, incredibly beautiful lake; such an ambiance will surely tempt every soul to visit this place at least once in their lifetime.

The name “Pangong Tso” in Tibetan means “High Grassland Lake” as the name suggests it is situated at an altitude of approximately 14,270 ft. It is about 134 km long stretch running between India & Tibet (a region now under the control of China). Nearly 70% of the lake flows in Tibet. The best time to visit is between June to September as rest of the year it’s frozen and ice skating competitions are held wherein skiers & ice skaters across the globe participate.

It is one of the largest brackish lakes in Asia & guides report that there are no fish or other aquatic life in the lake. It is approximately 5 hours drive from Leh City. We made our journey from Nubra Valley and drove past the Shyok river. Enroute we witnessed the beautiful Ladakh countryside & the mountains in the background appeared to be painted in different hues of brown, red & yellow.

There were numerous tents for tourists at the foothills of the mountain; we stayed in one of them. It was very comfortable and reasonably priced. We had scrumptious dinner at camp site least to say that it satiated our palate. The day came to an end & next morning we commenced our journey way back to Leh.

The first glimpse of the tranquil, azure blue waters and pebbled lake shore will remain etched in our hearts forever.

Ladakh is truly a Paradise on earth!!

September & October are the best time to visit Pangong Tso to see full glory of beautiful shades of blue colour.

The nearest basic medical health centre is at Tangste Village about 50 km. You can get basic first aid including Oxygen doses at most of the tents/camps.

You will not find any ATMs near Pangong Tso lake and hence, it is always better to carry cash from Leh (the only place where you find ATM in Ladakh) itself.