Darjeeling Guide- things to do, see and eat 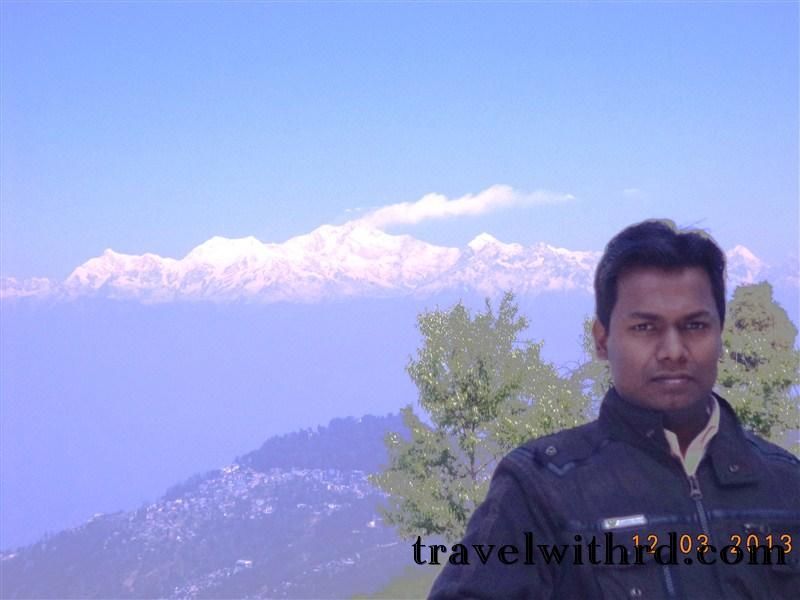 The way Darjeeling is as pleasing and as pleasing as it is, there is a great way to reach there. Toy train running on the small line of Himalayan Railway, also called 'toy train', is the oldest and most popular way of getting to Darjeeling from Jalpaiguri. By the way, from New Jalpaiguri, Darjeeling can be reached by road by taxi, but if you have come to enjoy the beautiful scenes of nature, then take a tour of this place. UNESCO has given world heritage status to the Himalayan Railway, which runs on the narrow gauge of only two feet. Following the road from New Jalpaiguri, which is called the Gate of Himalaya, the train runs along the road, the eye runs equal to the road playing Micholi, and in the middle it is often disappeared in the jungle. Going through the gardens of tea, this train takes you so close to nature that you forget everything and become part of that romance.

Himalayan Railway is the UNESCO World Heritage Site in Darjeeling

How many loops and tracks change, like Darjeeling, gradually swirling in 6-7 hours, like a mountainous old man joining hill villages and towns. Stations falling on this path also remind the British era. Located in the highest elevation in India at approximately 7407 feet, the railway station is located right here. During this unforgettable journey of toy train, you reach any other round. Where nowadays life does not have such a calamity. There is a rhythm in everything, living in harmony with nature is a life, which resides in these mountainous villages, and flowers blossom.

After an unforgettable trip to the toy train, you reach Darjeeling by the evening. Chorrasta is the main attraction in Darjeeling. You can also call it Darjeeling's heart. This is part of the Nehru Marg, where the land is flat and remains as a large square. Where people sit and sunbathe and sit far away from Himalaya's snow-covered peaks. This place is also the center of cultural activities. There is also a high platform where there is always something going on. There are many cafes and hotels nearby. Heritage shops made around the four-cornered will remind you of the Bertish colonial era. The shops still adorned with the old charm of wood carving. A little below here, going on a stroll on Nehru Road, the entire market is fully decorated. There are also some famous restaurants. Like a restaurant restaurant and British-era bakery- Gleneries Enjoy the hot hot sandwiches with the smell of Darjeeling tea, on the small but beautiful terrace of Kévaner. Darjeeling's Haseen Ladies, which are scattered in the mountains layers, look beautiful. 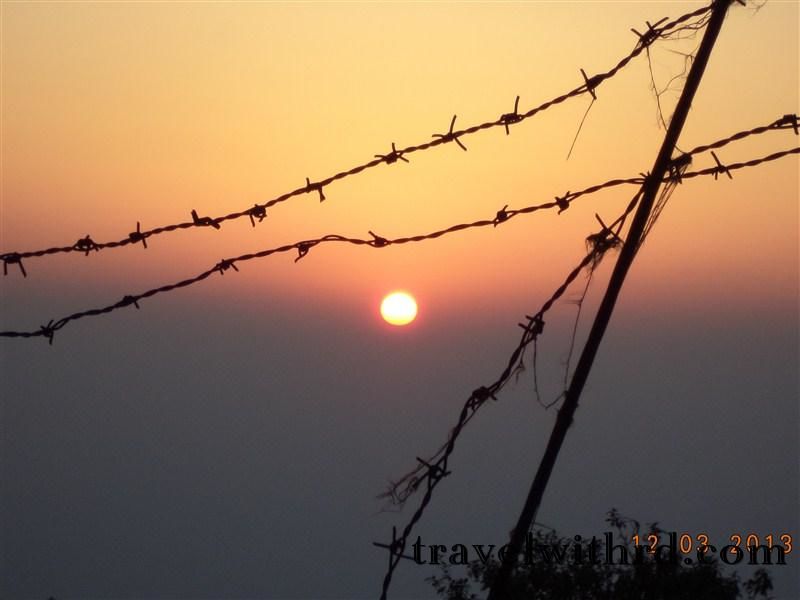 To check Sunrise on Tiger Hill the next morning, fix the taxi itself in the evening. This taxi will reach you in the morning at four o'clock in your hotel. In the return from Tiger Hill, the same taxi will show you the roaming monastery, the Bastasiya loop, the road and the Yolmova monastery. 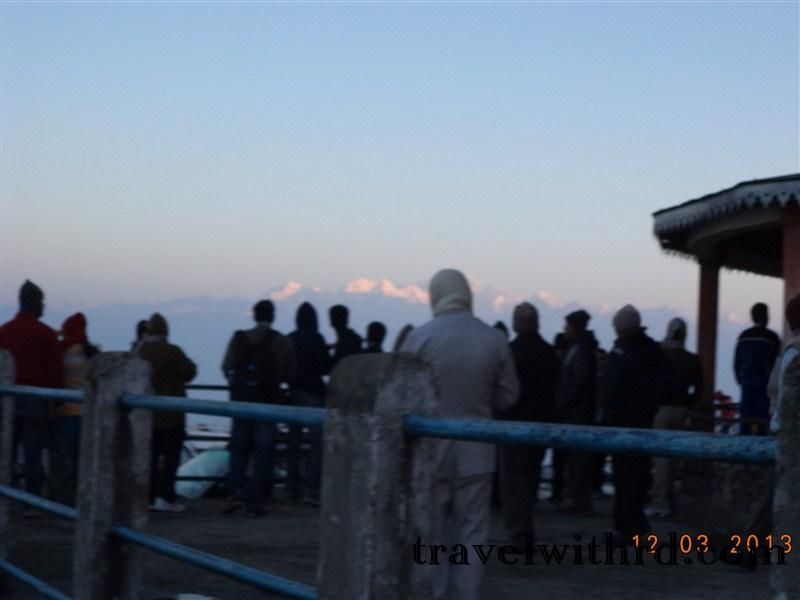 Tiger Hill is 11 kilometers away from Darjeeling Town. It is the smallest of the Darjeeling hills. Looking at the sunrise from here is a wonderful experience. Peaks from the eastern part of the Himalayas are visible from Tiger Hill. And if the weather is clear then Mount Everest is also seen. When the sunrise occurs on Tiger Hill, a few seconds before Kankhenjunga starts scavenging the red sand on the two peaks of snow. Such a beautiful view of nature makes everyone mantra.

Mount Everest is seen directly from Tiger Hill, which is considered to be about 107 miles away. A covered Shelter building has also been built on Tiger Hill to facilitate salonies and winter prevention. But most people like to be witness to this amazing view by staying in the cold winter trunk under the open sky.

Returning from Tiger Hill, there is a rooftop monastery near the railway station. This monument was built in 1875. It is a beautiful monster in which the statue of Buddha of 15 ft high maitreya is seated. This monastery is the center of Tibetan Buddhism studies. Some invaluable manuscripts of the time of Mahatma Buddha in the roaming monument have been preserved and preserved. In the morning, Bhutia people market the clothes and other items on the railway line outside this monument. The market starts till 9 o'clock, then the movement of the toy train begins.

A little further than the roaming monster, the lapis lop falls on the top of the mountain on the right hand. This is a circular round on which the toy passes through the train. The story of this place is also interesting and interesting. There are a number of goals made from sugar and this loop is also round. This is why it was named Tatsia loop. A martyr monument is built in the middle of this loop. A young man's statue has also been set up here in memory of the martyrs in the freedom struggle of 1947. In the morning there is a lot of initiative in the morning. Bhutia people are also decorated with woolen garments and local handicraft shop and they have their luggage ready early on the arrival of the train. Since this place is situated at a little height, therefore, see the whole valley of Darjeeling. And in the direction of the iceberg, snowfall ranges from the snow, so many people here also work to show this view from the telescope. Just for this, you have to pay only 30 rupees.

The road is located just a short distance away from the Yolmova Monastery Bastasiya Loop. It is also known as Monitory Alubari Monastery. It's a big monster. Which was built in 1914. This monastery belongs to the Nepali community of people from North Eastern Nepal. This monument has been decorated very beautifully. This monastery has huge statues of Buddha and Padmasambhava. There are beautiful murals on the walls here. It is believed that the colors used from the thighs and herbs are used to decorate these paintings with colors. The huge prayer chakra is established in the premises of this monastery.

It's just 10 o'clock in the morning and you have a whole day left. Go to the hotel and get some fresh and then come out to see some of the finest views of Darjeeling. 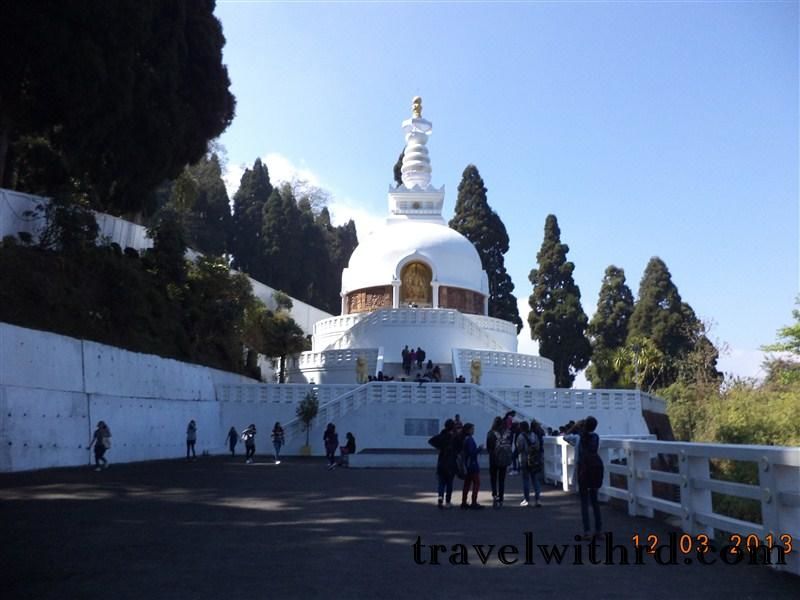 Peace Pagoda is a monument of white white peace built in the swirl of greenish Jalapahad Hill, the foundation of which was laid by Nichidatsu Fuji Nichidatsu Fujii, a Buddhist monk from Japan. This white monument is a symbol of peace and harmony in Darjeeling. This pagoda is 94 feet high and its diameter is spread over 23 meters. In this memorial, the four main stages of Buddha's life cycle have been engraved in gold-colored beautiful yellow statues of gold and other major events from the life of Buddha are shown on wood through beautiful carvings. After a fierce nuclear bomb blast in Nagasaki and Hiroshima of Japan, Fuji Guruji had pledged to build peace stupas around the world. In this resolution, this Shanti Stupa was also constructed by Fuji Guruji's principal disciple Nippozan Myhojji in 1992. Similar shapes and designs and many stupas have remained in the country and abroad.

There is also a Japanese temple with a pygoda complex. After walking around 5-6 minutes from the main gate, the main temple reaches the premises. The Japanese Buddhist Temple is a two-storey building, where the main prayer room is on the first floor. Where the beautiful sound of the verses coming from- "Na Mo Miyo Ho Ren gay kayo" gives the whole environment a color in a supernatural color. 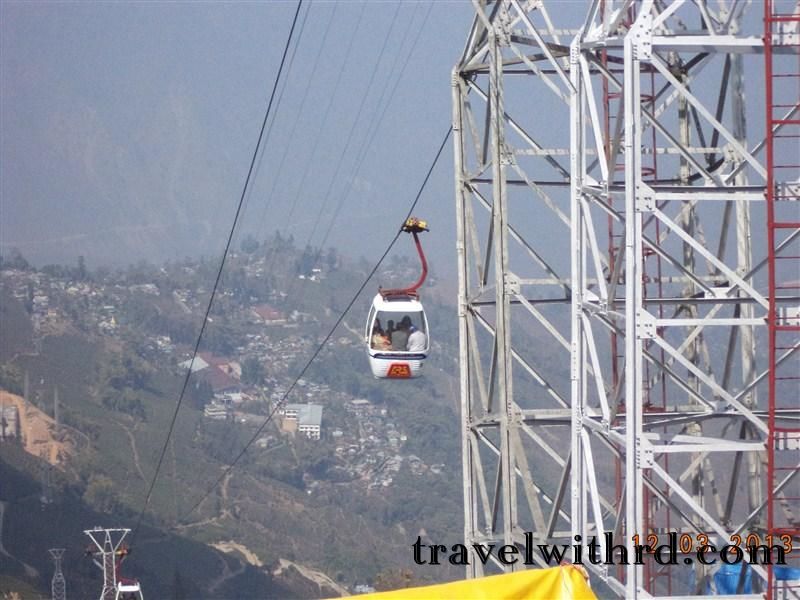 It is said that if Darjeeling came and did not ride the ropeway then nothing was seen. Ropeway is three km away from the Chowk market, which takes you from Darjeeling to the colorful valley. It also has the status of India's oldest ropeway. This ropeway was started in 1856. Then it was also called a flying crib. One end of it is at 7,000 ft height and the other end of the Singla market is 800 ft. The ropeway ride passes through the clouds and from here you can see the panoramic view of the tea plantation below. This distance is fixed in just 45 minutes. In this 45-minute journey, the minds of the beautiful hills, rivers and valleys of Darjeeling become mind-boggling. From here the tea plantation becomes beautiful. Looking at tea gardens with Ariel View is a unique experience for which you will have to pay only Rs. 150. 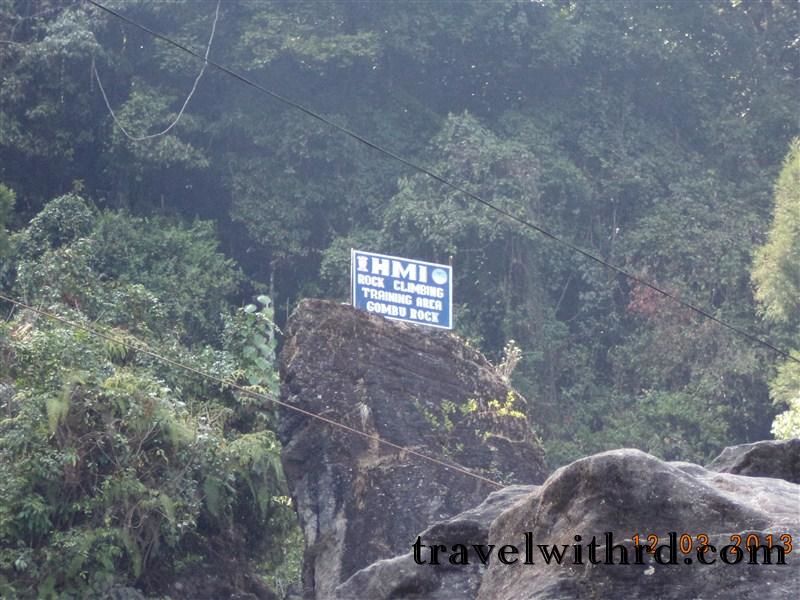 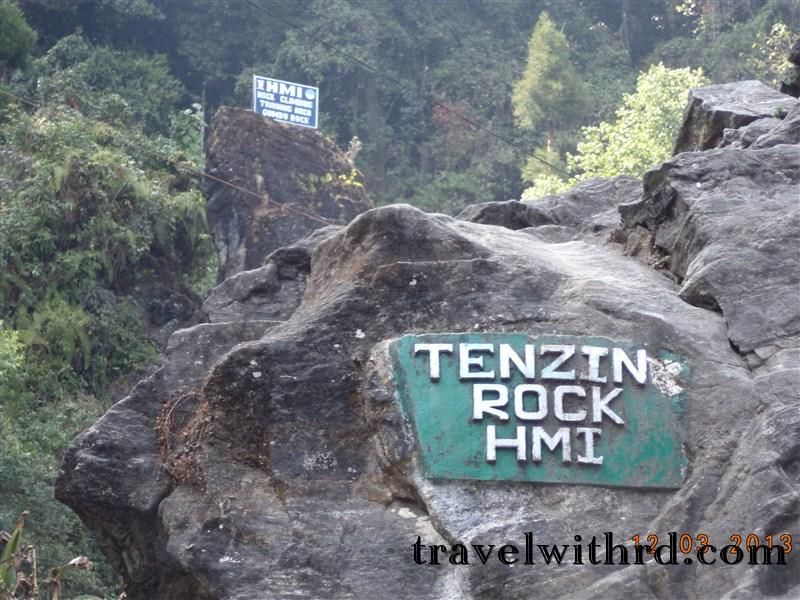 Himalayan Mountaineering Institute is a place where some valuable documents related to mountaineering have been preserved. This institution was first established as the honor of hanging the height of Mount Everest in 1953 by the first Indian mountaineer Tenzing Norgay and Edmund Hillary. There is a museum, as well as a boarding school for the students of mountaineering training. The scenic spot Tenzing Rock HMI is also here. Here, on a large rock on which the initial students are trained, as well as the exciting experience of the Rock Climbing by the ropes to the tourists is given by trained people. This place is similar to paradise for mountain trekkers, bag packers and exploras.

Rock Gardens is located 10 kilometers from Darjeeling Town. It is a picturesque rock garden with a waterfall passing through it. The way to reach this garden passes through several curved edges. This garden is made in the foothills of the mountains. Whose path passes through Orange Valley Tea Estate. The name of this water fall is Chunnu Summer Waterfall. Using the natural resources of water in Rock Garden, it has developed into a terraces garden. It is a tourist attraction.

When should I go

Darjeeling is called Queen of Hills. It is possible to leave only two months of rain and go anywhere in the year. Every season has its own distinct joy.

The nearest airport is Bagdogra which is connected to all major cities like Delhi Mumbai, Kolkata. Darjeeling is 65 kms away from Bagdogra.

Travel from Bagdogra can be done by train or by road.

Where do you live

Every budget hotel is available in Darjeeling, where there is movement of tourists throughout the year, so be sure to book beforehand.

Friends will meet again, with some precious color of India's heritage