Dubrovnik: The hype worth it !

Travel not just opens your heart into the wild blue yonder but also to yourself. 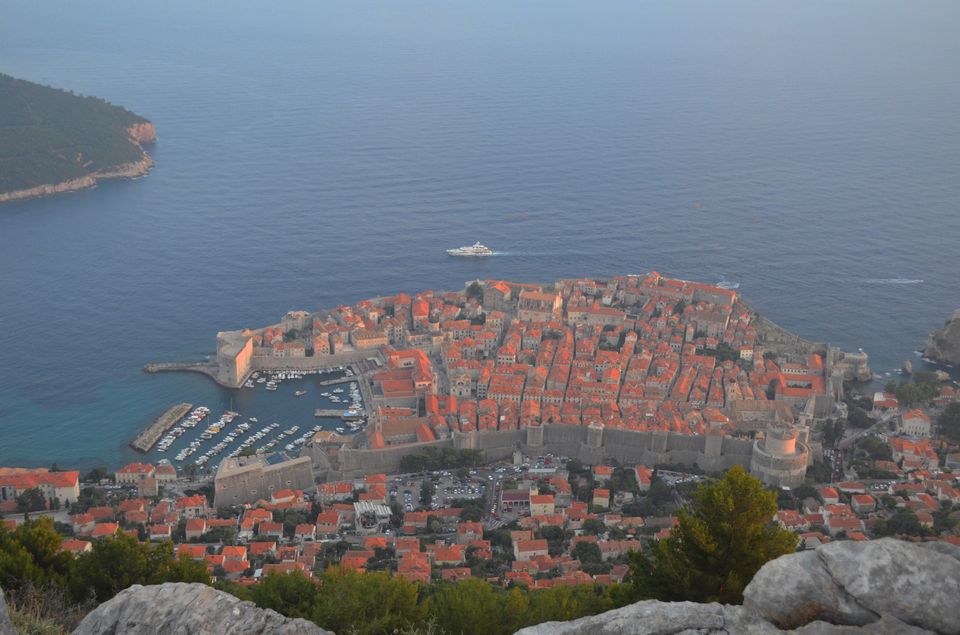 Dubrovnik answers the question as to why one should open minds to worlds caught in a web of hype. Long ago, labeled as the Pearl of the Adriatic, her claim to fame only arrived after being featured as King’s landing, an imaginary town in the famous television series, Game of Thrones. Once landed, you are propelled over the jaw-dropping Adriatic views, gorgeous pedestrian-only town lined with cafes, bars and shops, city walls once braced against foreign attacks and rolling hills and domes of Cathedrals making up the skyline. Its no wonder Dubrovnik is crowded for much of summer and luring tourist to shorter lines at top attractions, in the winters. If this is not enough, there are reasons good to make Dubrovnik your next city break.

The long 2 kms walk around the walls doesn’t just help shed your calories, it gives as well, a 360 degree panorama of the blue sea. The story of the walls dates back to 13th century BC when men build walls of rocks and fortresses by the sea to defend against foreign powers. Nestled inside its mighty ramparts is the old town of Dubrovnik today. Nearly all of its notable historical sites are clustered within the old city walls. No other city in the world has retained their medieval walls so perfectly as Dubrovnik and that’s the reason Dubrovnik is listed as a World Heritage by UNESCO in 1970. The city walls run uninterrupted for 1,940 meters encircling the whole town and its the precious fortresses which includes, Lovrijenac, Revelin, Minčeta, Bokar, St John and St Lucas. Of all, the Minceta tower will come as the most impressive if only one can conquer its 750 steep steps. Standing at the highest point of the walls, the city looks more beguiling and lures all for a longer stay. When you are in the dire need of a break, sit and relax in the many juice cafes all of which provide a stunning view. As you tour the impressive series of stone walls, don’t forget the Maritime museum and if a partygoer, drop by the nightclub in the Revelin tower. One that immediately catches the eye is those terracota tiles that were hit and the roofs that had to be replaced now looks shinning bright. If you take a closer look some appears lighter, as the new tiles are fading, so are the scars of the war. Yet one thing remaining unchanged is the city walls, giving the town its character and world known reputation.

A view of the magical old harbour 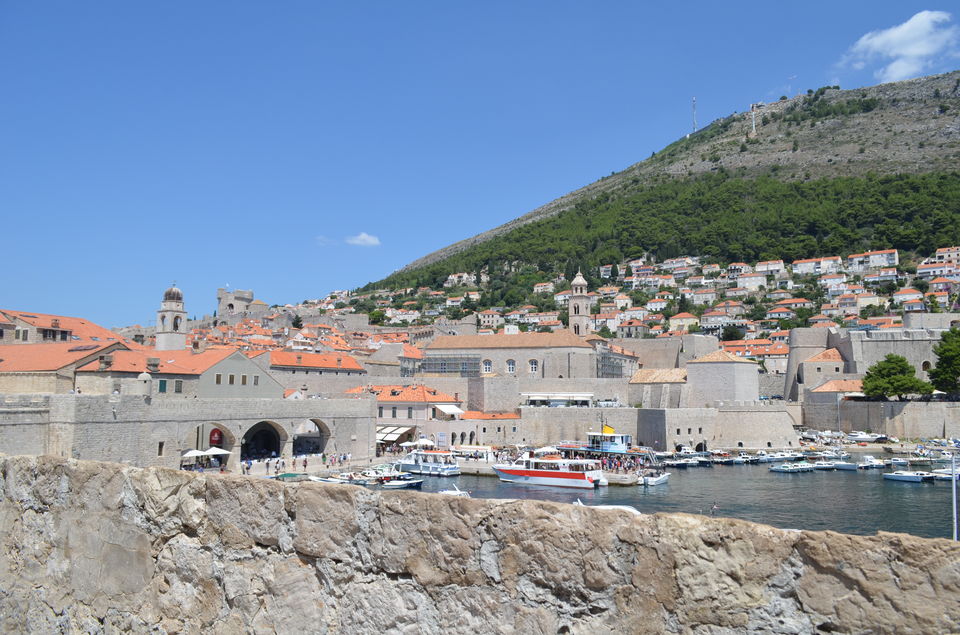 Fort Lovrijenac is instantly recognizable to Game of Thrones fans as the Red Keep in King’s Landing. 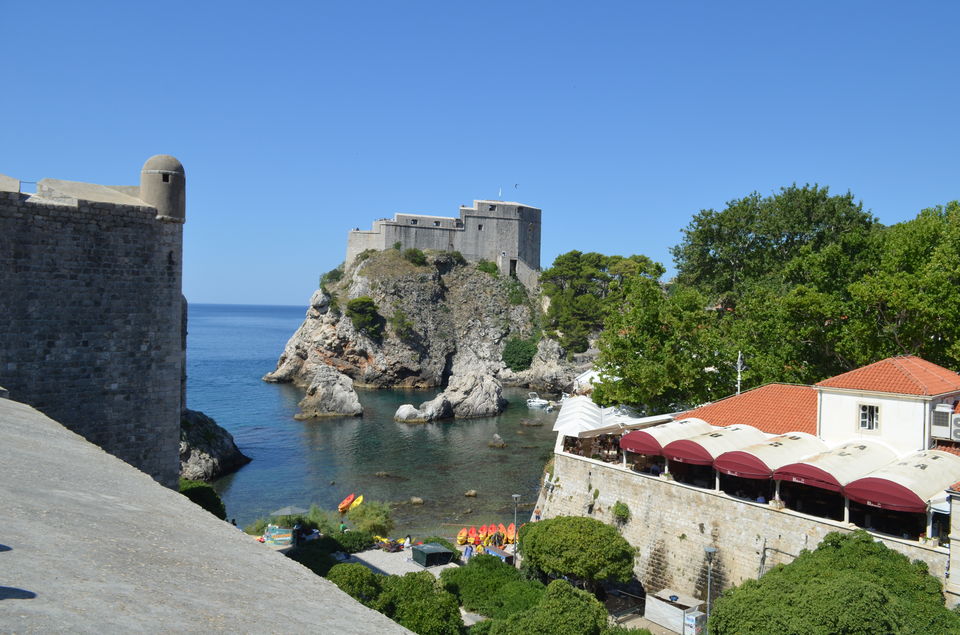 Take your vacation up a notch sailing the 16th century replica of Karaka ship around Dubrovnik and the Dalmatian coast. Karaka, the traditional merchant trading ship is replicated today for travellers to cruise down the blue sea, gorgeous lagoons, medieval towns and islands and many remarkable sights calling out to you. Indulge in a feast of lunch or a sundowner on the deck while listening to the tales of the old . Now a 5-star ship equipped with all things luxury, getting on board at any time of the day is always a good idea to while away one’s time in middle of the Adriatic. Of the most popular tours in the Karaka is where you delve inside the amazing world of Game of Thrones and discover the many locations filmed, take photos wearing GOT costumes, hear events from behind-the-scenes while relax sipping the Dragon blood cocktail (non-alcoholic for kids) and enjoy the views of King’s Landing from the luxury deck. At the end you’re satisfied to the core to advise all fellow travellers to live out the authentic Dubrovnik experience and can reason why this east European city is turning to be the most sought after escapes for globe trotters.

If there is one place in Dubrovnik you want to stroll over many a times a day, it has to be the teeming thoroughfare, better known as Stradun, connecting the city in so many ways.The drag stretches for around 300 metres and was constructed in the 13th century after a channel that separated two parts of land .Now lined with souvenir shops, art galleries, pricey fashion boutiques, bars, open air restaurants and some michelin guided, and is often the venue for major events in the city. The revamped baroque architecture with a medieval infrastructure, street network and the limestone main drag often mistaken as marble gives Dubrovnik’s most famous street an old world charm. At the end of Stradun is the meeting point for tourists and locals alike at Luza Square. Surrounding the Square are Dubrovnik’s most important buildings which includes, St Blaise Church, The Treasury, Palace of the Rector, the Customs House and standing proudly in front of St Blaise Church is Orlando’s Column, a statue dedicated to the Knight who saved the city from a siege.

The Stradun can be a 10 minute stroll but travellers along with the city residents takes a good amount of time to ramble around. Is it the freshly made seafood, or the charming hole in-the-wall eateries, gleaming stone buildings with long green shutters, red-tiled roofs, the pleasant surprise awaiting in narrow passageways or simple watching the world go by, makes this street like nothing ever seen or heard.

At no given time Stradun can be seen without crowds. 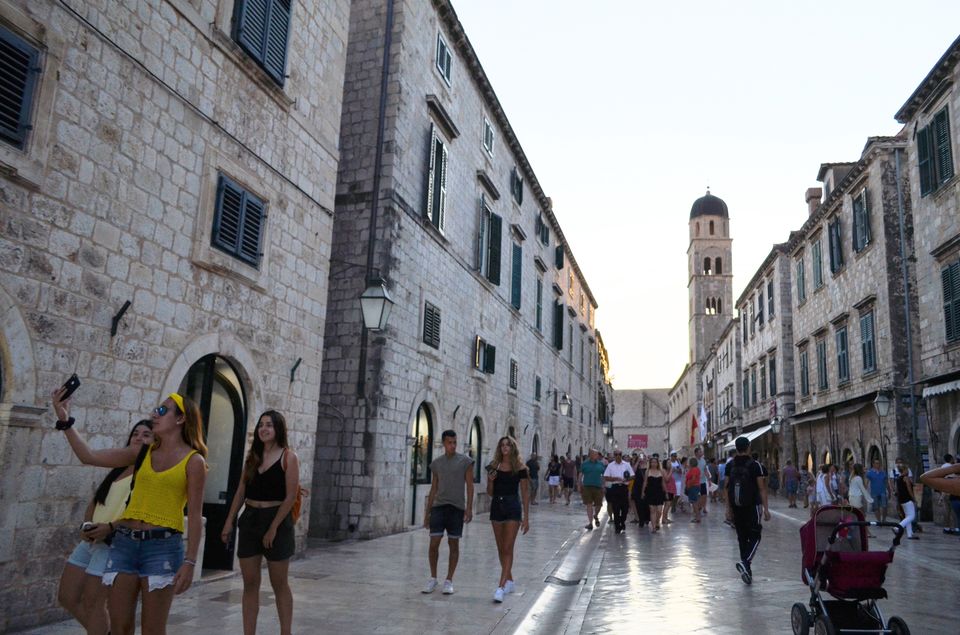 If you want to stay in style, old town has plenty of top class under-the-rader hotels. Staying within close proximity to old town will also open to the city’s famous sights and entertainments including concerts, theatres, galleries, historical museums, night clubs, numerous restaurants and bars. But there are many craving to escape the big crowds to see how life is in the Croatian countryside. Ticking off a homestay over a luxury hotel will offer a much fulfilling experience to your vacation. Dubrovnik’s suburbs takes high above the residential hill, close to 10 minute bus ride from the iconic walled city or a 30 minute brisk walk up the stairways. Mostly, all apartments are built at a vantage point and the guests visiting them get a treat of their lives having to live on home made wine, olive oil, fresh grilled fish from the sea and all authentic home produce. For those who wouldn’t mind missing the touristy side of the old town and desire a secluded retreat, a stay in Lapad peninsula or Cavatat will fit your bill. And if you’re a second time visitor and none of the old town sights are left to be seen, escape to the beautiful peninsula of Babin kuk, famed for its campsite, mobile houses as well as loads of beach activities to keep you busy.

Room with a view.

Sea kayaking opens a perfect way to soak in Dubrovnik’s stunning coastal beauty. What is a trip to Dubrovnik without settling for an island hopping adventure on the Adriatic Sea. Paddle around Lokrum, a wooded offshore island with a monastery, fortress, beaches and explore its nearby caves. Enjoy a beautiful morning or noon kayaking the Zaton bay that leads to a mill once fed by underground springs of the deep bay. Where the bay meets the open sea, paddlers are rewarded with views of the near-by Elaphiti Islands, a cluster of ten islands out of which only three (Lopud, Sipan and Kolocep) are inhabited. Kayak on the calm waters to run into craggy high cliffs, sleepy fishing villages clung within coves and sometimes scoping out unexplored corners for cliff jumping and swimming. While in the day these islands get their fair share of tourists, in the evenings they are left to their inhabitants who are mainly retirees or lovers of the slow paced life. Sea Kayak excursions range from half day to a action packed one week around the Dalmatian coast. While you sip the chilled Rakija watching the sunset in a harbour-side bar gearing to return mainland, the intrepid in you sees to be that one lotus-eater hell-bent on staying forever. This is the tour you don’t want to miss.

The best views of Dubrovnik are not all walking the perimeter of stone ramparts. The summit of Mount Srđ delivers another set of views of the walled city and the clustering islands. All through the climb to mount Srd, the only sound you hear is the crunch of boots and the deep breaths of fellow hikers. Not to mention, this 90-minute walk from Old Town is on most hikers' to-do list. While the rest wouldn’t mind standing in long queue to jump on a three-minute cable car ride to the top. Here you can browse museum exhibits housed in 19th-century Fort Imperial. The photo journalism found inside opens a window into the lives who fought their homeland war in 1991 – 95 and its effects on the innocents, combatants and the city’s rich cultural heritage. Located at the upper cable station is the panorama restaurant clearly giving you the best panorama of the city, enjoy a drink or a meal without forgetting to bag the best click of the trip.

Gourmet on a vacation

Whether you’re looking for a fancy cocktail or a local relish, the harbour side eating houses are ones offering stunning vistas that never fail to impress. Drawing a comparison between other Croatian cities, Dubrovnik spoils every diners with whole lot of options which includes Italian, French, Asian, Asian fusion, Bosnian, Mexican, International and of course Croatian delicacies. A perfect Dubrovnik holiday would mean digging into some Dalmatian cuisines prepared in a top quality restaurant using the freshest, seasonal local ingredients. Situated in the immediate vicinity of the sea, there is no denying seafood dishes are maximum in the menu cards. Diners may wish a five-course meal listening to soft tunes of the piano or those playing live Jazz is a real treat. After several years of building a reputation, the eateries in the alleys of Stradun serves up modern travellers their Dalmatian classics with a modern twist like tuna or salmon served with mixed salad, spring onions and a soya based sauce or if one is a experimental foodie go for žrnovskimakaruli, the tubular pasta from Korčula which is here served with a choice of beef, shrimp or truffles.

For those looking for a much local gourmet fare you’ll have to head some ways out of the Old Town. Konoba Dubrava—which isn’t too far from the cable car stop at the top of the hill—is a go-to spot for peka, the region’s signature dish of baked meat and vegetables and other local delicacies. Oyster hunting is another of the region pre-occupation and its surrounding Mali Ston Bay on Croatia’s Dalmatian Coast should be in every foodie’s itinerary. It doesn't matter if you are a swish cocktail drinker or a slow one don’t forget to tick off enjoying a drink from the Cave Bar More, watching the sights and sounds of the sea. Look for the obscure Crljenak, the grape that was transplanted in America as Zinfandel in the Buza Bar, the bar literally is a hole on the side of a cliff. Who wouldn’t want a drink on the side of a cliff overlooking the vast sea and sailboats bobbing on it.

Get lifted with the incredible views in a cable car ride. 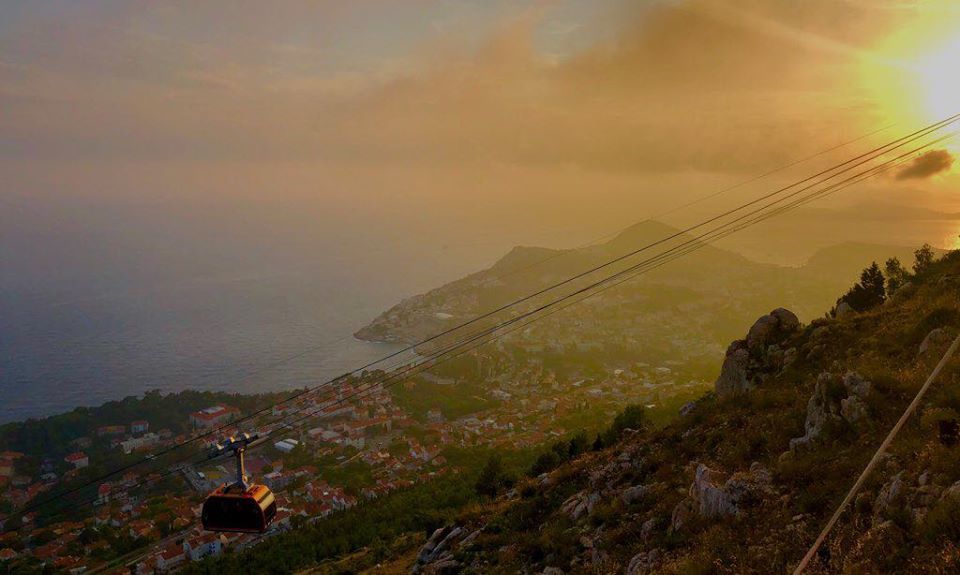 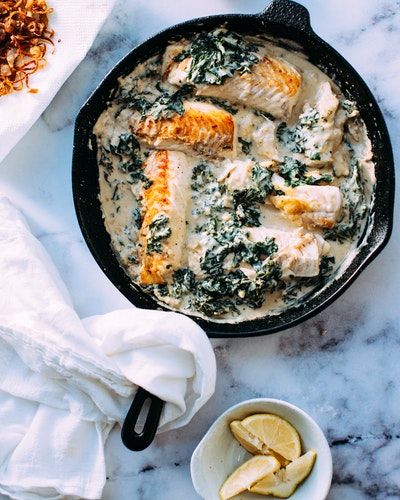 Restaurant Proto , a michelin guide in the by-lanes of Stradun. 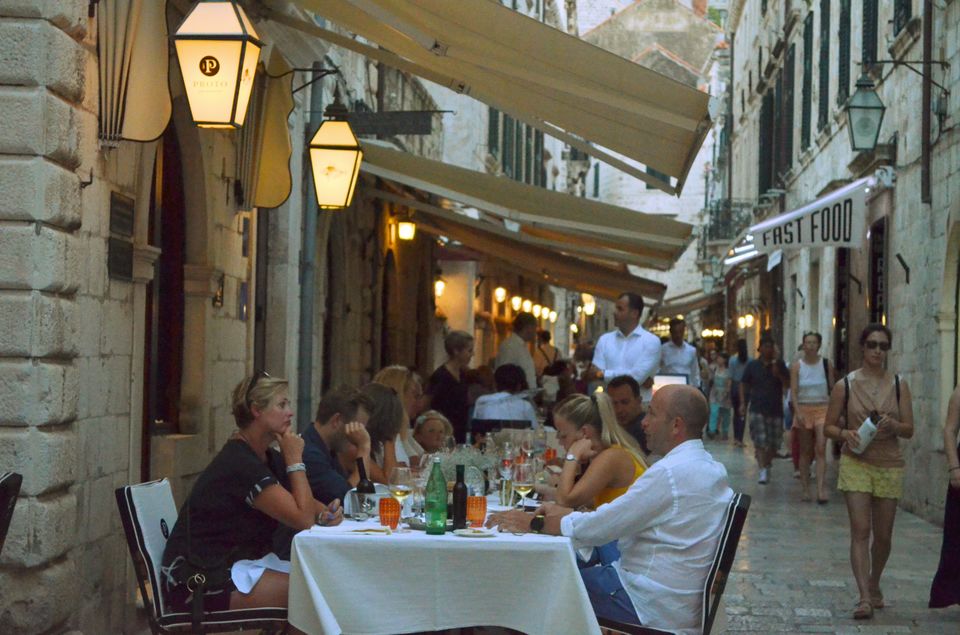 Dubrovnik is really all that good as its cracked up to be. Billed as the "new Côte d'Azur" and the hottest destination for the outdoorsy, foodies, culture vultures and history buffs, this Croatian jewel feels less like a city and more a walled town jutting up the sea to which my photographs and this story are a witness.