How I Went to Gelsenkirchen to Watch Schalke Beat Mainz 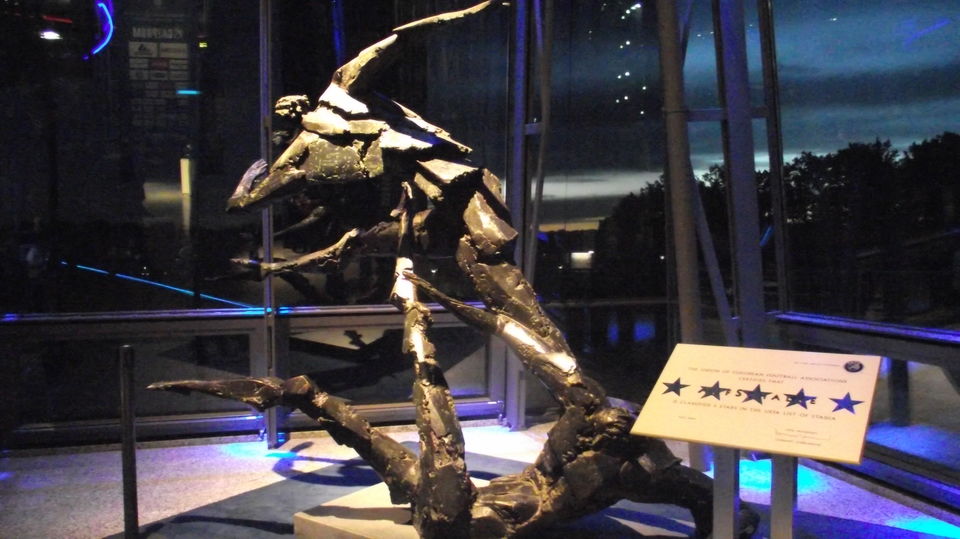 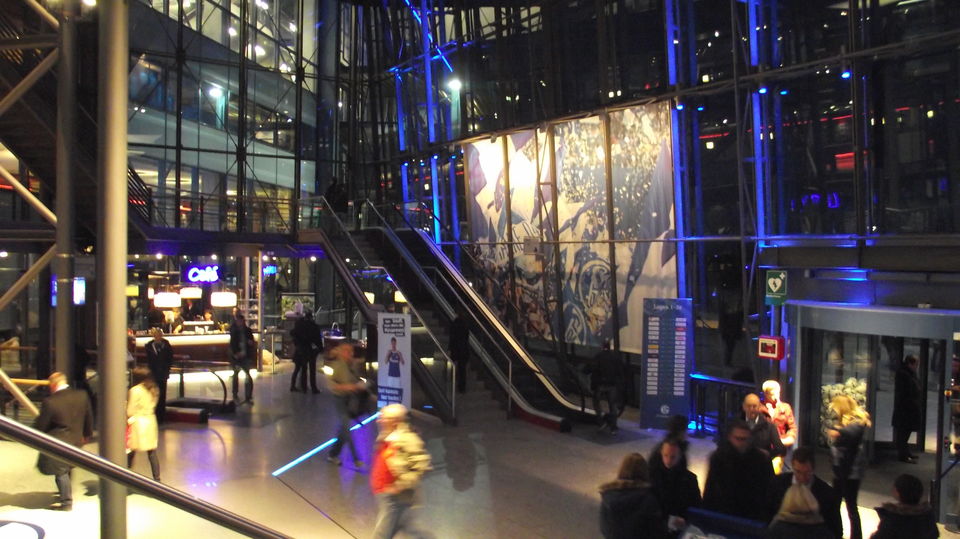 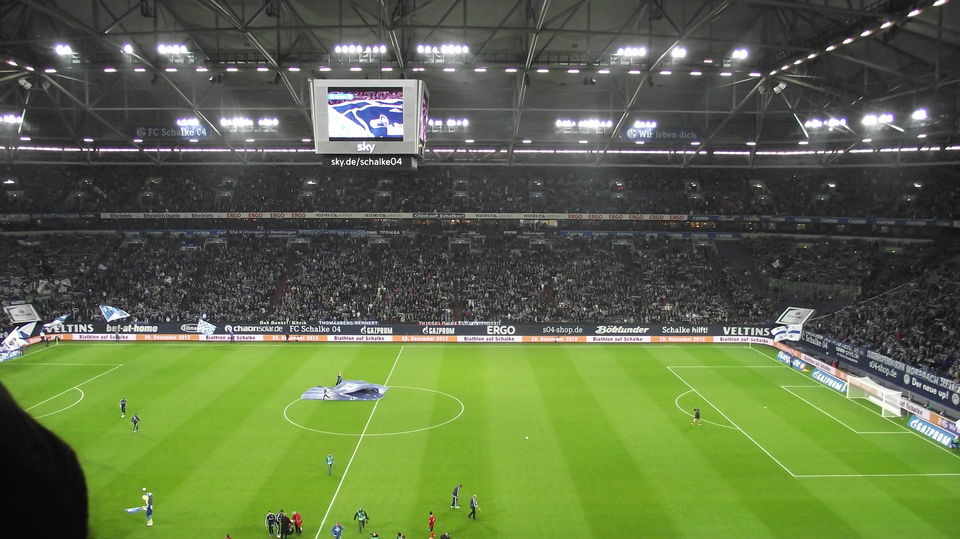 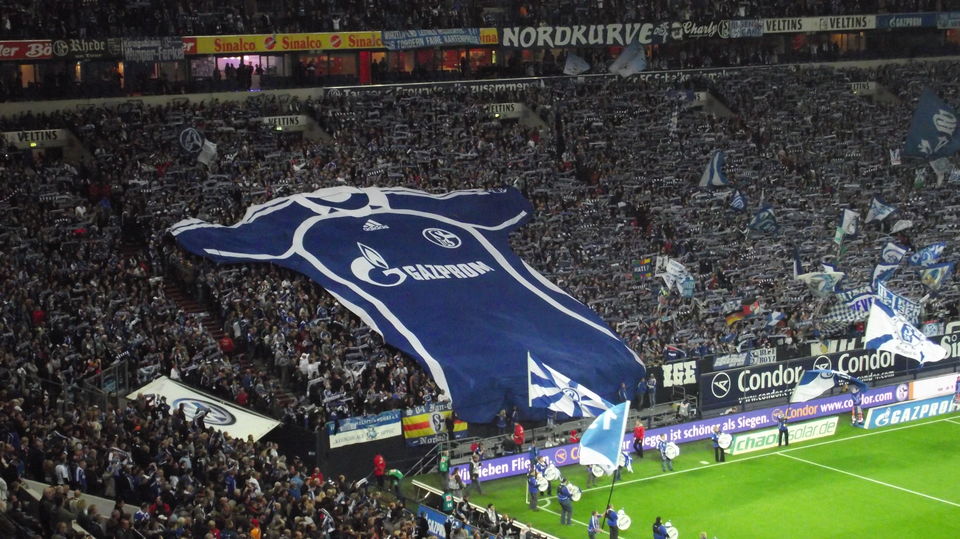 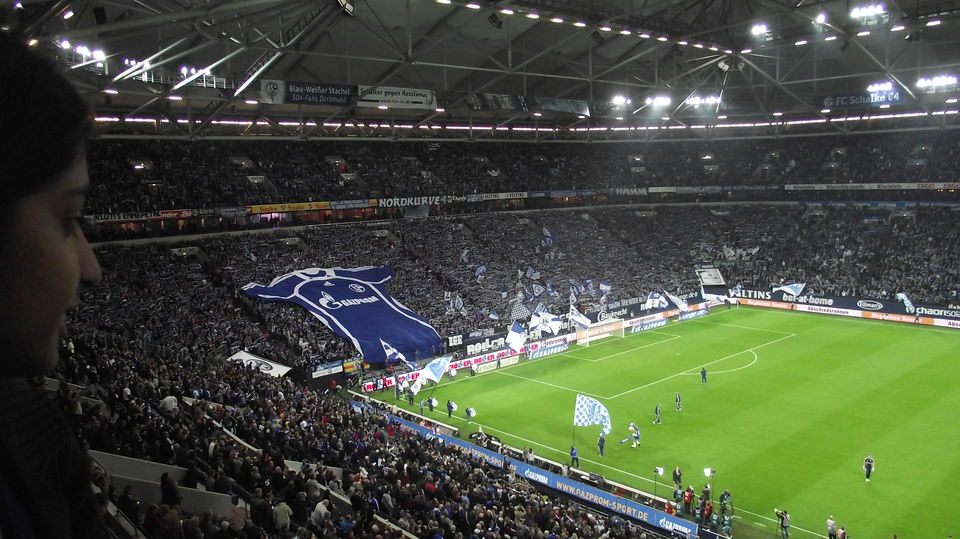 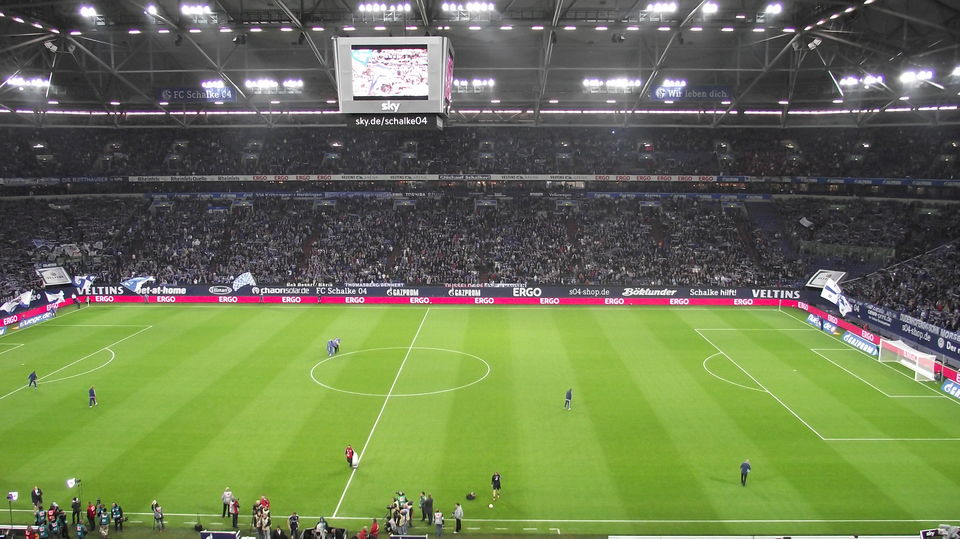 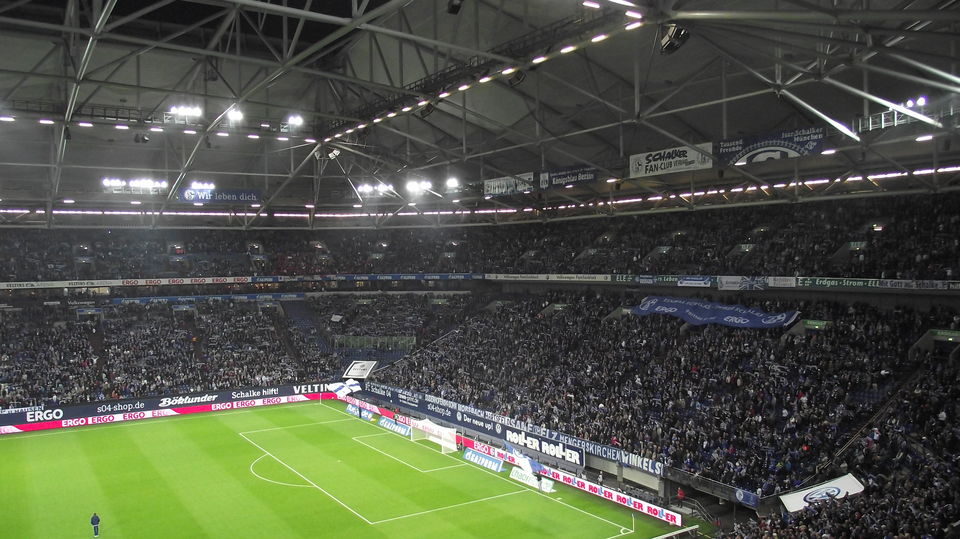 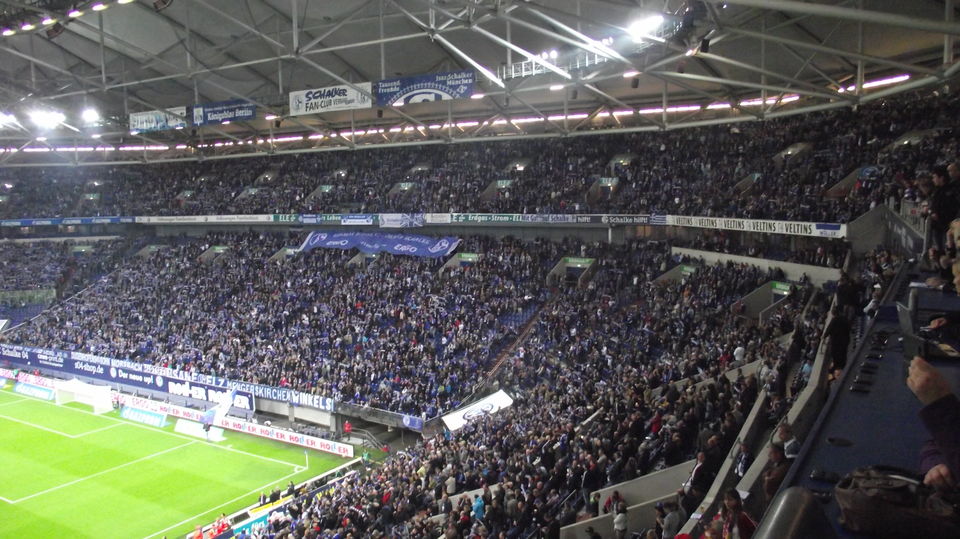 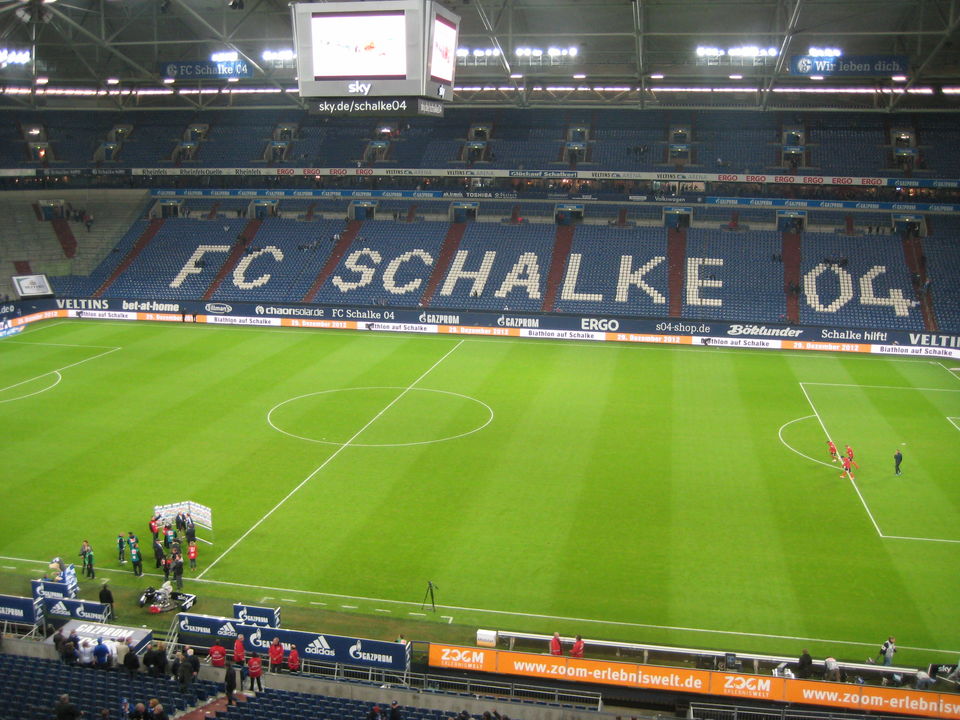 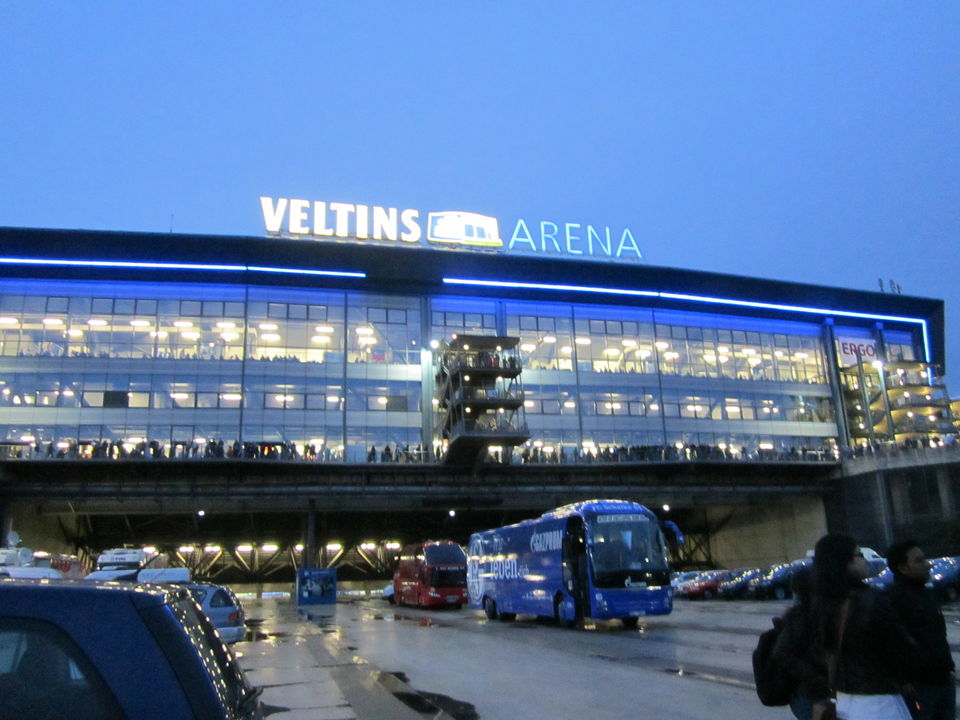 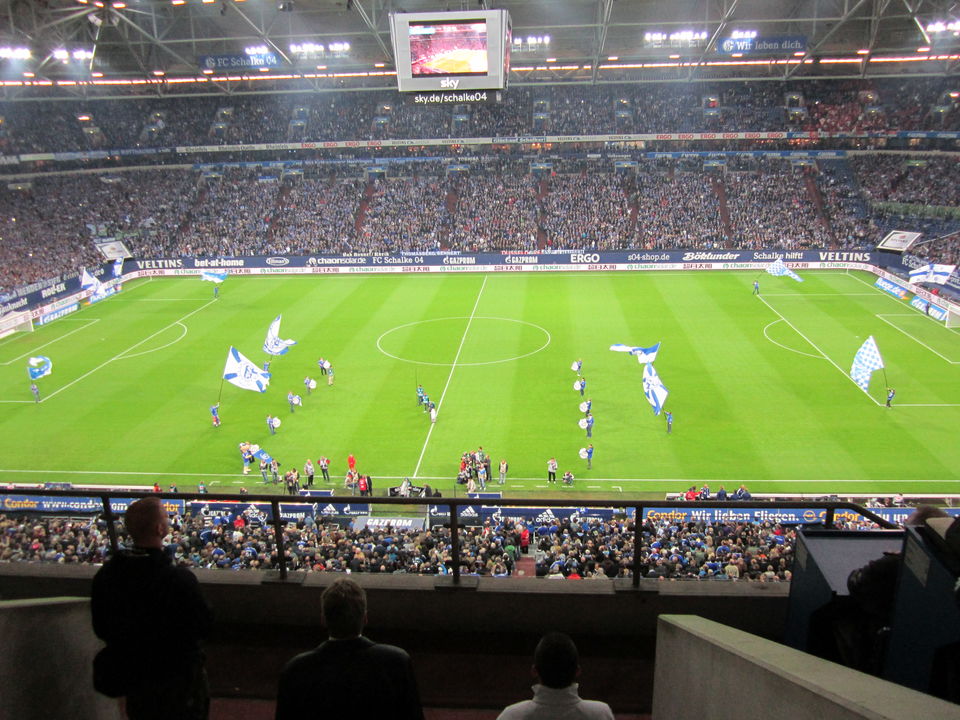 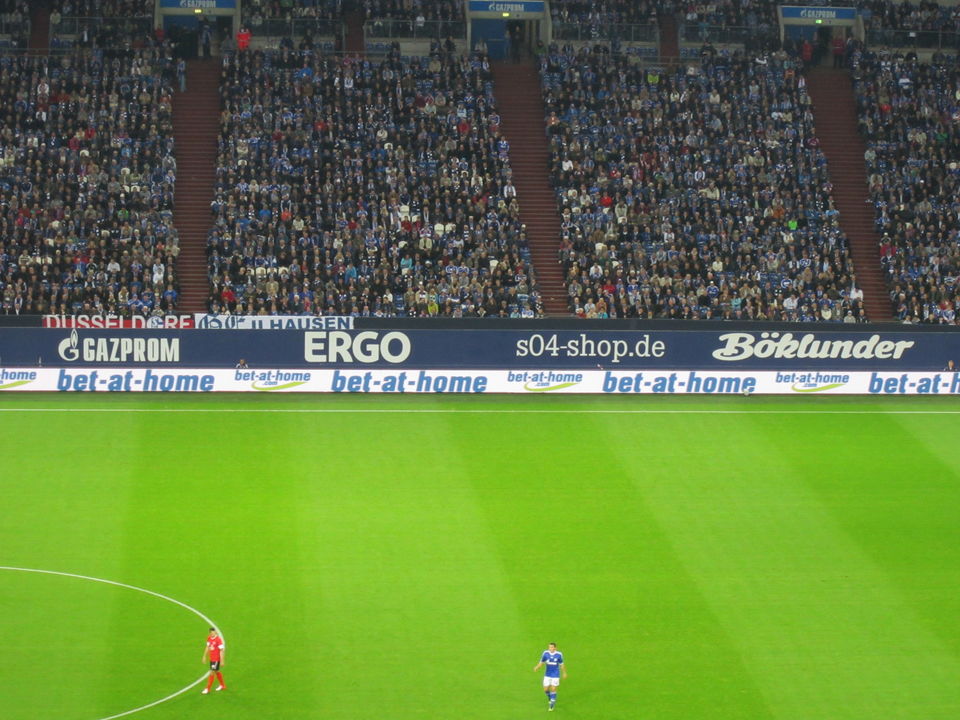 About the only time I stood still. 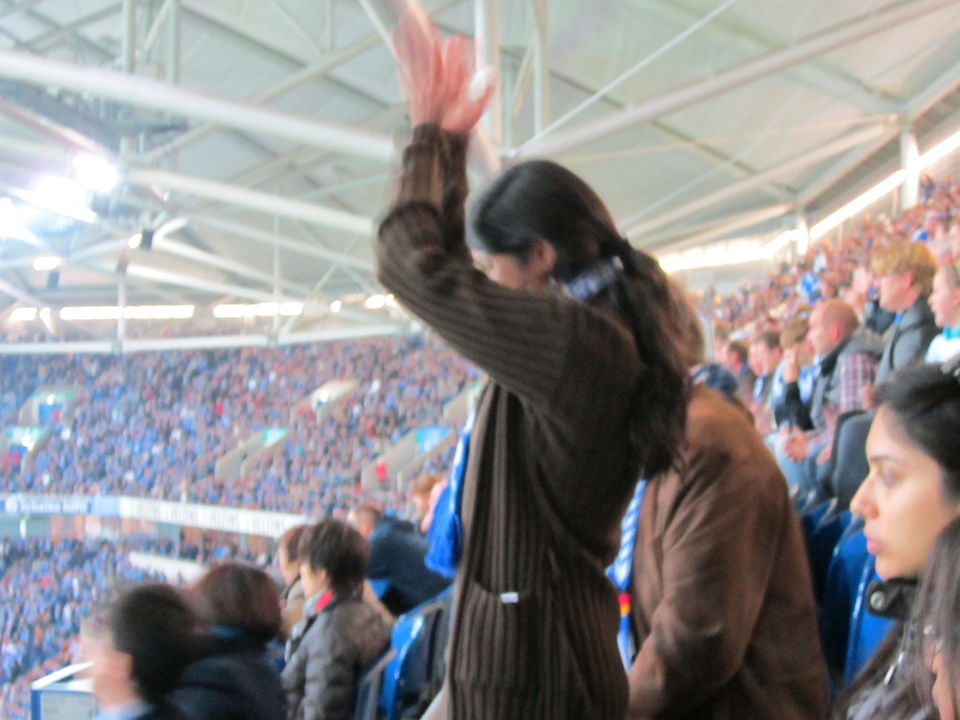 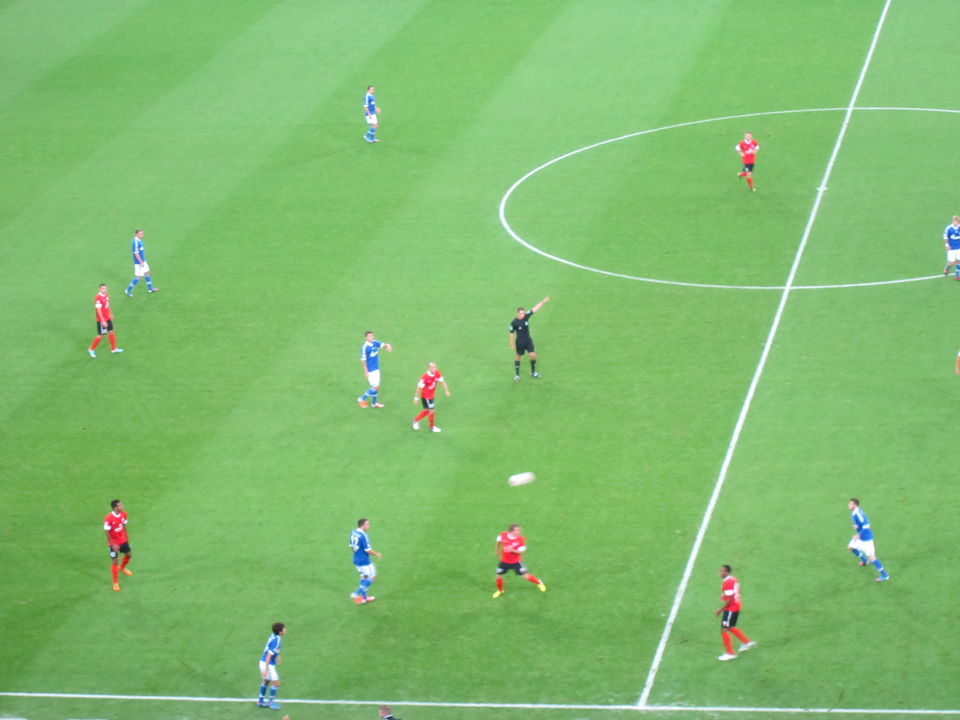 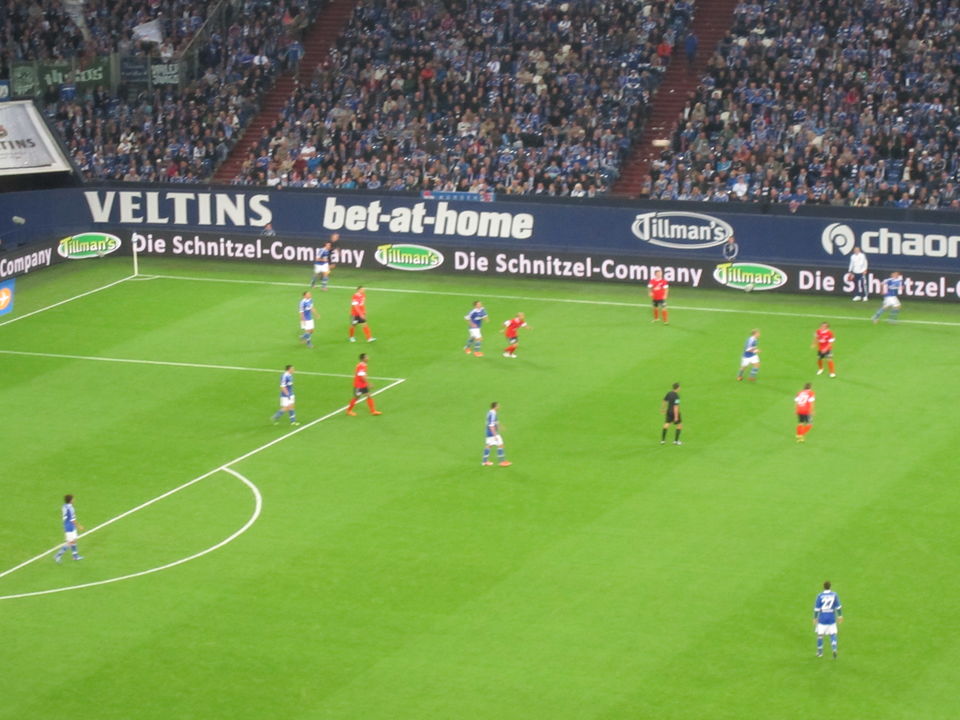 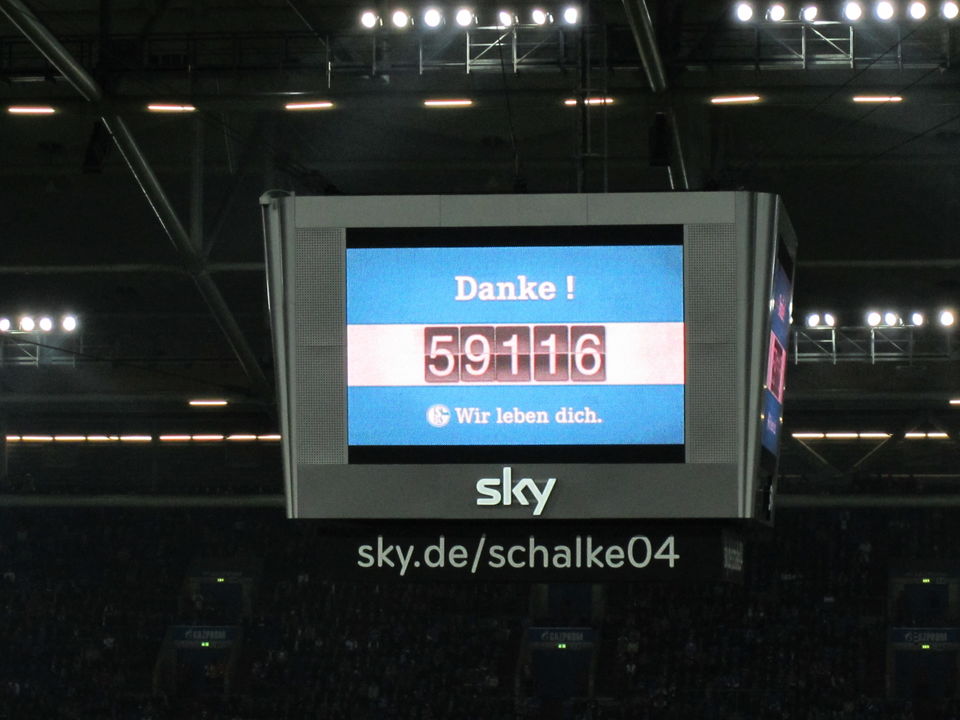 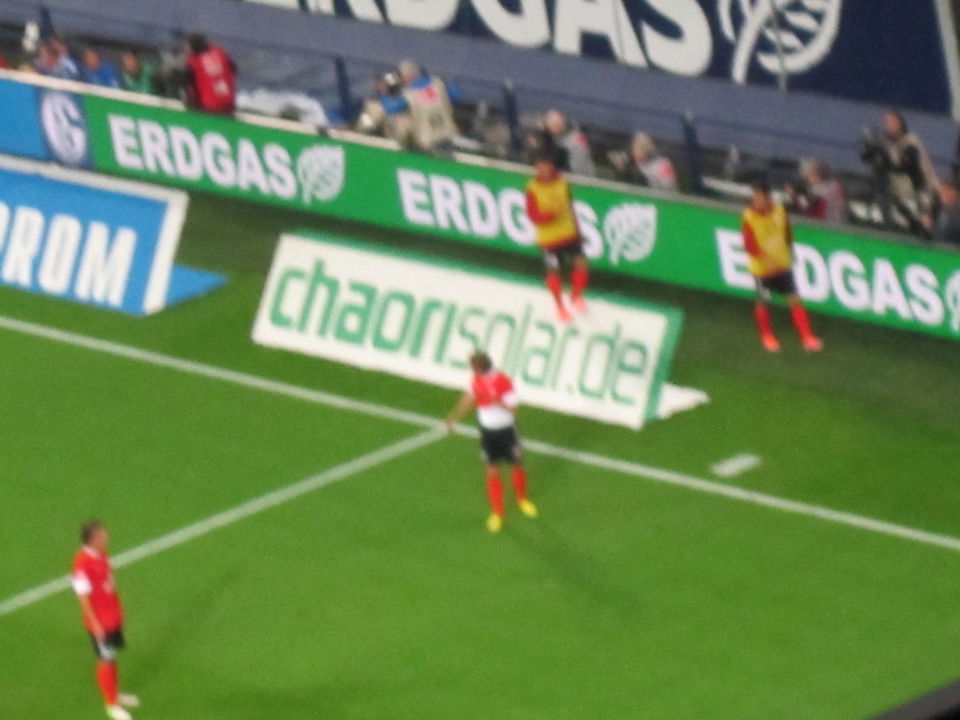 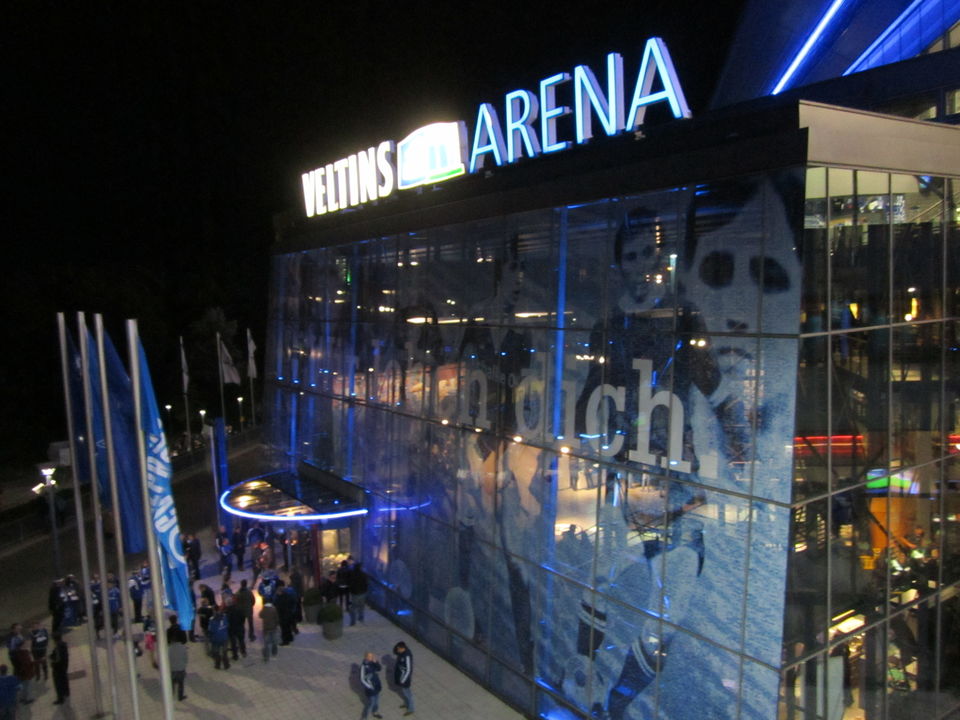 Sea of blue and white 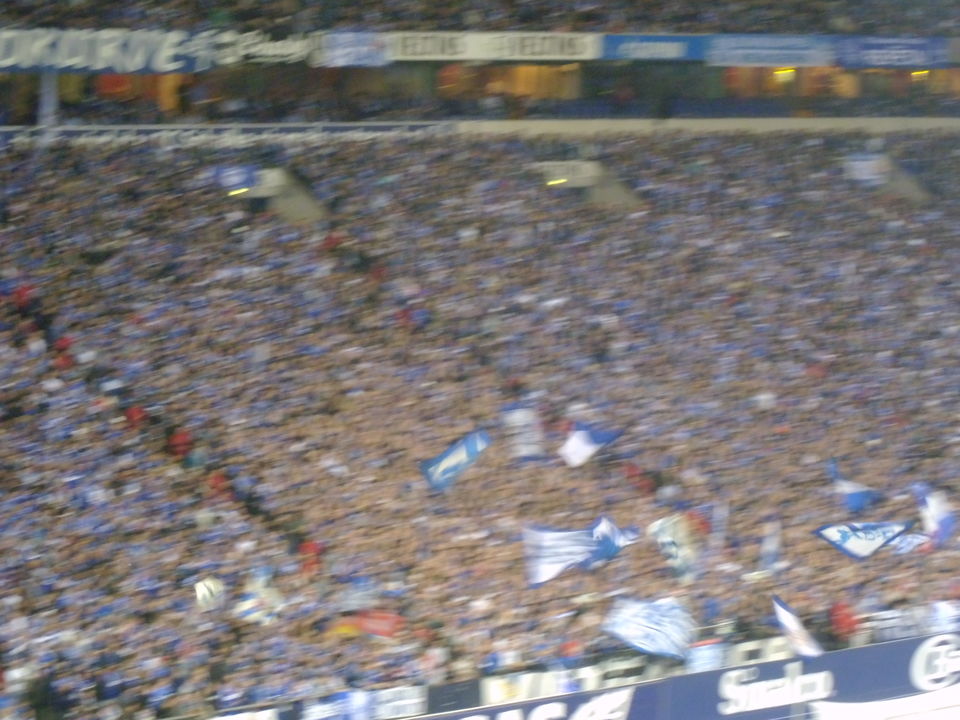 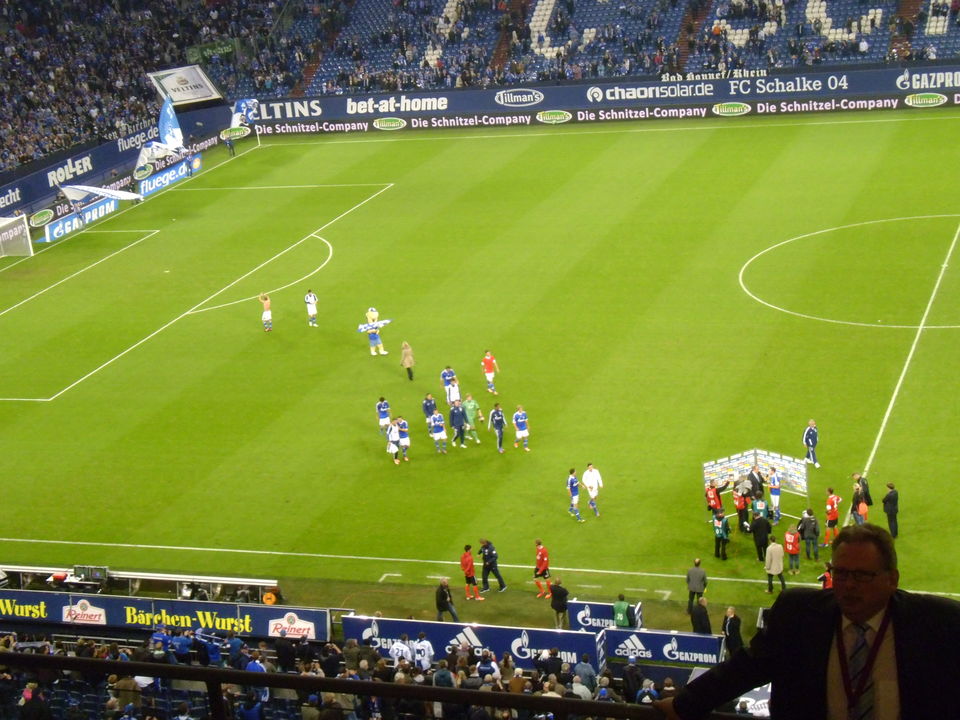 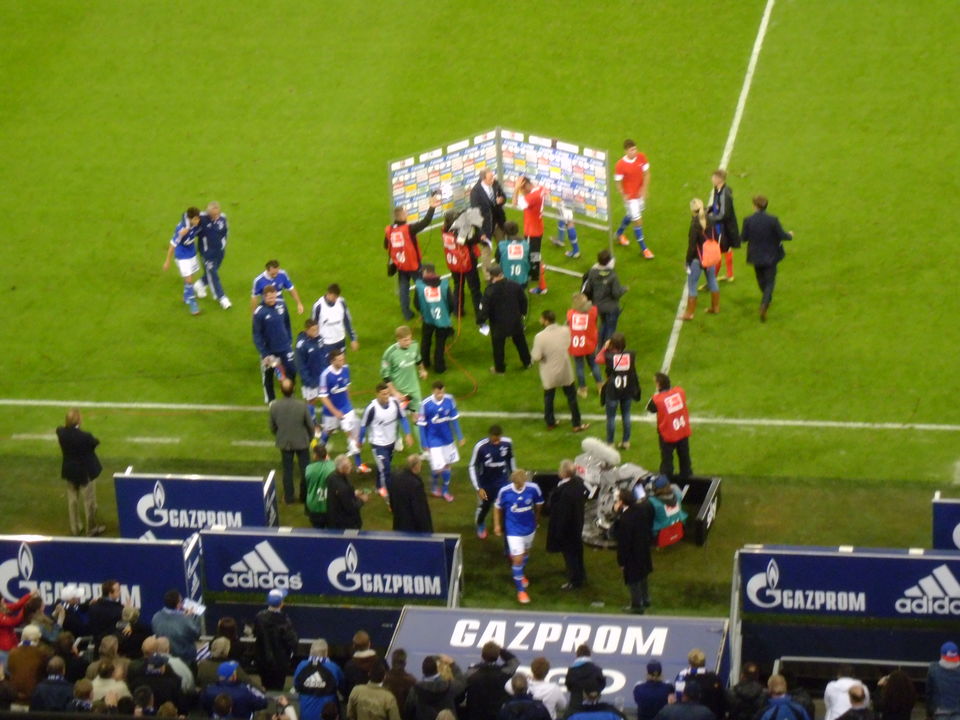 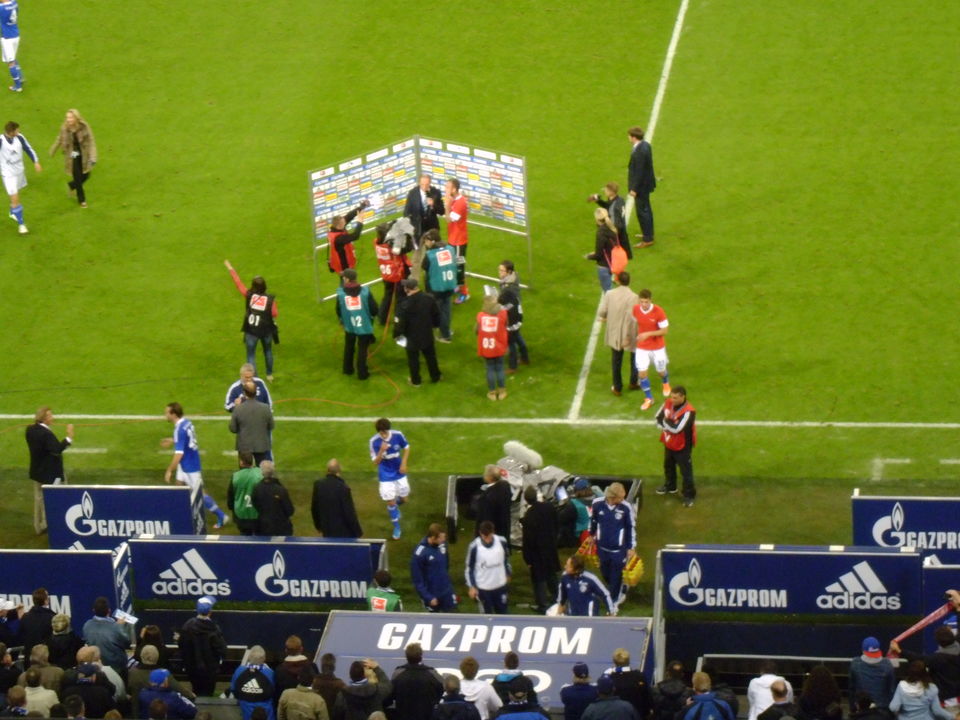 Being a completely football-mad Indian woman has its moments. One is that I’m a novelty because there aren’t too many of us. So when you do a project in a fairly football-mad country, people are more than happy to share that madness with you, and love the enthusiasm you show. I find that this happens a lot with people who love books, too – you immediately bond with people who have stacks and stacks of books, and you get taken to little bookshops that will sadly fade away now that online shopping is so common. But that’s a rant for another day.

So when Deutsche Welle Akademie, Germany, gave me a spot on a project they knew how much I love football. I’d added it as a little footnote in my application and they found it pretty novel. As it happened, the two people who led the project were football enemies: one loved Borussia Dortmund, the other loved Schalke. The Schalke fan won that round, so I had an incredible surprise waiting for me one weekend: I was going to Gelsenkirchen for a football game.

The Schalke stadium, Veltins-Arena, is incredible. At least, it’s the only European stadium I’ve ever been to, so it seemed quite incredible to me. I was completely awestruck and it showed. I gaped and gawked, and I’m not ashamed. We were met by a gentleman who introduced himself, but my ears were buzzing from excitement and I couldn’t really hear his name. (Sorry!) We were given the matchday programme and a flyer, and then taken just above the press section of the stadium, which was immaculate. This also meant that though I missed out on the atmosphere of sitting among home or away fans, I had an excellent view.

Now I had yet another surprise waiting for me. I’d been so thrilled to be there that I didn’t even look through the matchday programme – a pretty thick magazine. I got a gentle nudge to do so, and guess what I saw? I’d been written up in the magazine as the ‘football-made Indian woman’ who was their guest that day! The write-up also included a little hope that even if I’m an Arsenal fan – this was the year when Schalke and Arsenal were drawn together in the Champions League, and they beat Arsenal, too, in a game at the Emirates while I was in Bonn – I’d go back to India and start a Schalke fan club. Even though I follow Bundesliga and they’re now my firm second team, there’s a long way to go before that happens. That's me and me again.

I felt like a mini celebrity for about ten seconds before it was all washed away, because the teams came out to warm up, and the stadium just erupted. The stadium was an entire sea of Schalke blue and white, with a tiny section of yellow – the Mainz 05 away support. As the game went on, my respect for the away support grew. Despite being woefully outnumbered, and despite their team losing, they made themselves heard and sang their hearts out.

There wasn’t much the Mainz support could do, though, because Schalke were far and away the better team on that day, and they warmed up for their derby – they were playing Dortmund next, and they beat them, too – with a pretty convincing victory.

I went back to Gelsenkirchen to meet Rolf Rojek, on the board of directors of the Schalke fan club, who is so dedicated to Schalke that once, he made it to a final after surgery on his testicles. He insisted that he’d rather they cut them off than miss the game, apparently! Thankfully, he didn’t need to go to such drastic extent. His office was a revelation – it’s a shrine to Schalke. One day, I’ll have a shrine to Arsenal like that, with amusing jokes about Tottenham in there, just like he does about Dortmund. Just look at this. Much admiration.

The folks there were so amused by my unbridled enthusiasm that they offered to get me tickets for the derby game, and I couldn’t make it because of a commitment to the project I was there on. I would’ve bunked it and gone in a heartbeat, but it seemed like a horrible thing to do to people who’d been kind enough to do so much for me. Now I regret being good. I should’ve gone. It would’ve been incredible.

If you’re a football fan, you’ll understand what I mean when I say that the specifics of the game are still a blur, but the overflowing emotions from every direction left an impression that will never, ever be forgotten. On to the Grove one day, so that I can sit with fellow Gooners and sing my heart out.

Now, a disclaimer: if the photos are blurry, it’s because I could not stay still, and I handed the camera over to somebody else also there on the same project. He was kind enough to try his best, but I was not considerate enough to stay still.

Pic credits: Charu Kartikya and Patrick Benning. I think. It's all a blur in my head. They had my camera for the night and gave me a few extra.

HotelsMap
SPONSORED
Want to book a similar trip?
I accept the Terms of Use and Privacy Policy of Tripoto.
SPONSORED
Tagged:
##Germany##Gelsenkirchen##Schalke##Veltins-Arena#Deutschland#Road Trip#adventure#beach holidays#city travels#festivals & events