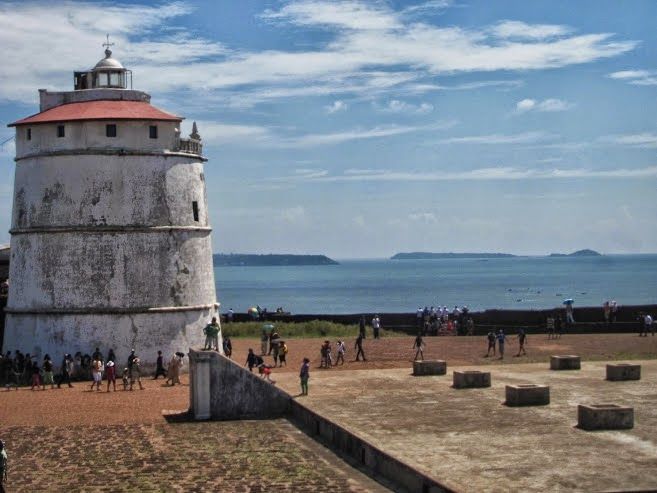 Today's day was the last day of this Goa tour, and there was much left to look at, the main of which was watching dolphins. The money which was being told to show dolphins on Baga beach was more than necessary and it was also morning in the morning, so thought that by watching a last troy they will see. But it was late in the morning and after that the hotel was not allowed to accept the late checkout, it was late in leaving the hotel and left the idea of ​​dolphin philosophy in a way. Changing the plan, we got out of the Agada Fort. Agada Fort was about seven kilometers from our hotel, we were going there, till then the dolphin dolphin was getting screaming in a young man's bike, so if we talked to him from the same person, then the gentleman, we would all have 1200 RS (twelve hundred) agreed to present the dolphins and for us it was like this that the blind got two eyes. This is called the Sinquerim Jetty Boat House. A link for information about this is as follows: Sinquirim Jetty Boat Association. These jetties are run by the Goa government. So click to read more about the Dolphin Trip and the Agada Fort, which is suddenly encountered.

This place was very crowded but due to the surroundings of the trees, the heat was not so much understood and the ice creams, cold drinks, coconut water and all the corners were available for drinking, so we also took the pleasure of Kulfi. Wait for the turn. Our number was almost ten to fifteen minutes, after carefully arranging all the people in the boat, the boat's engine was turned on, and in this way we went to see the dolphins that were going out. Here the condition was placed by the driver himself, even if the dolphin tail would not return without showing it. In so many of us, we went on the move and driver Sahib was sitting in the yacht, watching the Agada Fort and some bungalows, one of which would probably be Hasina (Hasina Maan Jayegi), Hindi film was shot and one Hindi film actor Jackie Shroff was banding. You also see