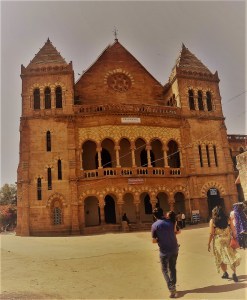 I always sensed that we had zero to see in Bhuj bar when we keep on hearing the word 'Kutchi Manu hu' in 'Taarak Mehta Ka Olta Chasma'. Jethalal keeps on haughtily muttering the word. Well, also I thought Rannotsav is the only festival to catch the eyesight of in Kutch. I wanted to visit Kutch just to check on Rannutsav. But, touch wood, when I stepped in Bhuj, well, that was where we stayed, I was taken aback. The place pitched marvellous places, culture, festivals and many more. Thus, I came to note that we should not judge until we distinguish. Bhuj is a city that is mystically adorned with heritage sites. You step in one place and it has a history to tell. Me being a heritage lover, I couldn't ignore the place. Each stone, each particle of mud has a story to reveal. I was so mesmerized by Bhuj that I visited the place again in the same month. Kutch has more than 300 forts and each fort has a history of its own. By now, you would know that Kutch was ruled by Jadejas for many centuries. Well, there were many invaders and Jadeja's succeeded for a long frame of course. Dholavera site that happened since Harappan civilization exists there too. This site reveals the lifestyle, architecture and structure of the buildings. We feel that we are advanced and we have developed cutting-edge technologies, but folks of that age were well more progressive and tenable than we are now. Well, I am going to visit that site soon. So, check on this blog for more of such places. Out of the places we touch-based in Bhuj, three were such you should not miss even though you get to visit the place for just a day or two.

There are ample places to visit in Bhuj. Bhujio hill is one of those. This is the famous Bhujio hill around which the city of Bhuj revolves. This is the point where you can get a picturesque view of the entire city that lies calm and serene. It is a climb of fifteen to twenty minutes but mind every step as the gust of the wind is enough to drag you down from the hill. Halt on any step to catch your breath. There are two temples as it is believed that Rani built one temple down for the devotees who couldn't climb the hill. There are many facts and stories about the Bhujio hill and how the name derived. You can catch on to the detailed and mesmerizing tale of Bhujio Dungar.

Things to keep in mind while going to Bhujio dungar

It is a hill and take your car as up as you can. Locals will be of immense help. Well, keep on talking to locals to relish their sugary Kutchi dialect. Kutchis are great at the help. Hill is at a height and you would run out of breath at some points. Take a break while you climb. Catch the view and take pictures as many as you can Feel the breeze The climb is steep and the steps are a bit awkward Steps are carved from stones and so are cracked and damaged. It was caused by the major earthquake in 2001 and Bhuj was affected the most. At some point in the climb, you would not find any holdings or railings. Tips: You can try not to see further than a single step. That way you can manage it It was an adventure for us. Especially for me. Don't forget to carry a bottle of water as it is a must if you do not frequently travel mountains Catch the wind and breathe the air when you reach the top The view is nothing less than paradise Take a deep breath and feel the ecstasy of Gods creation.

There is a small temple located at the top of the hill that has Bhujang dada and Mataji in it. The site is worth a visit. Pray to your contentment. Climb down is easy but take care of the railing with fewer steps. You can catch sight of the woody plants and cactus that have grown in the dry climate on the hill. The site is hypnotic and is sure to make you feel contended. This site is a must-visit when you visit Bhuj. Check my detailed post on the story of Bhujio hill and its mysterious existence.

You can catch a glimpse of the hill at the point you enter Bhuj. There are points to climb. The spot we chose was the temple one because I wanted to visit the temple that lied at the top of the mountain. You can view the temple from far away and it gives you a sense of yearning. A sense to visit the orange temple at any cost.

You should choose early morning or late evening to catch the glimpse of the sun. Sunrise and sunset are outwardly amazing.

The name of the palace derives from Rao Pragmalji II. Do you want to know how the Rajas and Maharajas lived? Do you want to feel the lavishness they enjoyed? The lifestyle they lived and the check on the things they used? Well, if you are a history freak like me and want to learn anything that you come across, this is the place. Pragmahal is the palace that lies on the Darbar Gadh Road in Bhu. This Gothic-style palace is three-storey. The ground floor was used for administrative offices. The second was used for Darbar hall and the third floor was used as a residence. Mahal has more than fifty rooms including the rooms for the conference, guest room, library, gym, pantry, chess, and many more. Furniture that is used for building was imported from France and Italy. While my travel in Bhuj I noticed that palaces in Bhuj are smaller than compared to the palaces in Jaisalmer, Jaipur and the rest of India. But they are way cooler and the arrangement that the palaces have is out of the world. Credence the Maharaj had for the goddess and the love for the kingdom was unsurpassed. You can read for a detailed post on Pragmahal in my blogpost. This palace holds the largest clock in India. It is worth a see and if you want to check the heart of the clock. The mechanism lies on the very top floor. Steps that are carved to check on the mechanism of the clock are worth a glimpse. This clock was far more innovative in those times than Rado and Fossil.

Bhuj has a scorching climate and is hot most of the times. But you can visit the place from November to March. Climate would be pleasant and you would be able to enjoy every place without a sweat.

If you are a history freak and you love monuments. If you like to recreate the life in the palaces the Kings lived and the orders and commandments they passed. If you like to crisscross the elements and the gears they used during their reign. This is a must-visit site.

The attraction of the palace:

The clock is the major attraction of the palace is it is massive enough and is the only one in India. The bells of the clock were gaudy enough to be perceived few kilometres away in the city. It is a gusty palace and worth a sight.

This palace was built by King Rao Lakhpatji of Kutch. Around 1750 AD. This is located next to Pragmahal and you can cover both the places at the same time. This is presently converted into a museum and it houses all the material things kings enjoyed during their lifetime. Right from the elephant doors that were costliest to housing the coins that were the currency during their time. You can even get the view of a photo of Mastani from Bajirao court. I wouldn't have known until the Bajirao mastani movie came into existence. That movie has major dialogues with Kutch. You can watch again to get a proper idea about the Kutch and Kutchis. Pragmahal is one of the must-visit places in Bhuj.

This museum is magical and you have to pay minimal fees for entry. If you want to capture the moments, they would charge extra for the cameras. Mind you, they are a bit strict for cameras.

Also, when we visited there was one handicraft mela that was held and I bought many craft items from there. You can be lucky enough when you visit this place.

Bhuj is incredible and every time you visit, you feel that it is not adequate. It is truly said' Kabhi Andar jakh ke to Dekho, pata chalega jo dhundh rahe ho who idhar hi he'. So, is India. Think of a place and you would find it. Also, do you know that each place has an amazing tale behind it? If you like stories attached to one particular place, check on my blog: Dynamic history of Sheikh Ladhasa Pir

I am sure you would be awestruck.

Also, if you like to know about places worth a visit in Gujarat, you can catch on my book: Apnu Gujarat