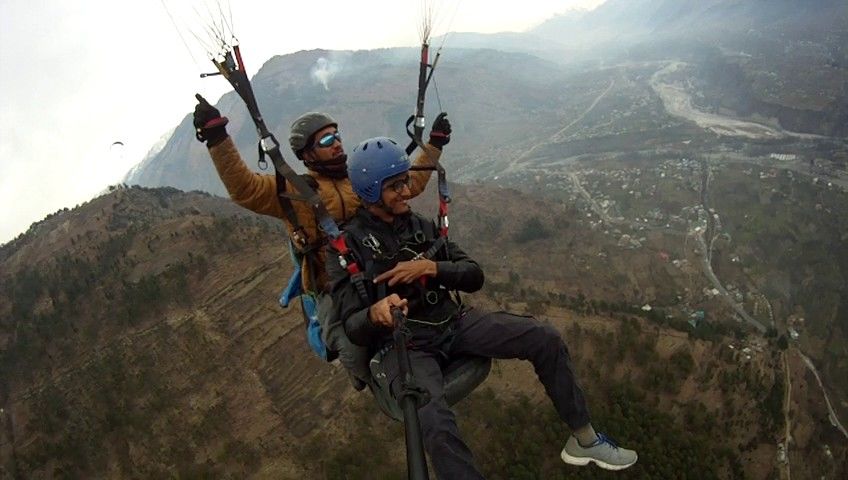 It was the first day of 2019. There was little sunshine. I had read the weather forecast and it was supposed to snow somewhere around New Year, I was eager for it. Now, for me New Year don’t hold that importance, there’s nothing new about this day. But I had something in my mind which was gonna make the first day of the year legendary.

Even before I had planned this trip, I had thought of someday trying paragliding. My first choice was of course Bir Billing, but when I planned this trip to Manali, I added it to my list, condition was that I would do it if I’m left with enough money, and I was. So I talked to Harry for his contacts in the “Paragliding” business. I had Solang Valley in my mind. To this day I’m glad I had Harry with me, he helped me a lot in this trip. He suggested me a guy in Dobhi, another popular point for paragliding in Manali. I later learned that Paragliding in Dobhi is cheaper and from a greater height. The cost was further brought down due to recommendation from Harry. That guy is “Harry Potter” of Manali, everybody knows his name.

So I started out. The point here to note is that if you’re living on the left bank of Beas River in Manali and want to travel by buses, you’ve got to plan ahead. Buses stop going on that route after 6 p.m. and after that you will have to head Manali and then return from there to your place. If you can walk that much, good for you. Else you will have to take a cab or an Auto rickshaw who will charge you 500 Rs. Imagine being alone and having to pay that much. Thankfully I didn’t have to.

I to a bus from Shuru to Naggar. Then Naggar to Patlikuhal and Patlikuhal to Dobhi. I had to wait for a few minutes at the counter, and then I accompanied 3 other guys aging around 24-25, in a car to the paragliding point. I paid 2000 Rs for the same, and 400 for the video. These were the guys that told me about the scene in Solang, and how much they were paying in Dobhi. I’m not gonna tell how much they paid, but was glad I did the right thing in trusting Harry.

Now this may sound strange, or may seem that I am lying, but I didn’t feel scared, at all! I was faking the nervousness in front of other guys I don’t know why, but inside I was calm. Even I was surprised at this, I had this perception that I was afraid of heights, apparently not! You can judge by my facial expressions in the Video, which I will share as soon as possible. All in all it was a wonderful experience, witnessing things from a height of 7000 ft, people appearing as dots and those gigantic vehicles as the size of ants. I may go for Bungee Jumping inspired by my experience.

So that was my first day of the New Year. I still haven’t told my parents about the “Paragliding experience”, I guess some things in our trips are to be kept within. The next day would be my last day in Himachal Pradesh, the trip was finally coming to an end. This week will be a week to remember for lifetime. My first solo trip, when I did everything I had dreamed about all this time.