India Travel GuideIndia Trips9 Beautiful Gurudwaras In India Where You Get The Yummiest Langar!

9 Beautiful Gurudwaras In India Where You Get The Yummiest Langar! 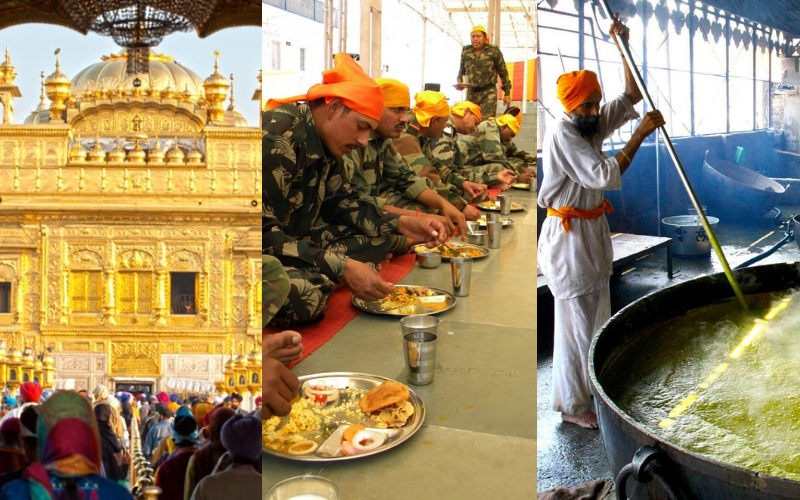 Served with dollops of kindness and palmfuls of blessings, even the simplest of food in the Gurudwara always tastes divinely delicious.

Langar is the concept of a free community kitchen in the Gurudwara where food is served to everyone with immense respect, notwithstanding any communal differences.

It teaches the spirit of volunteering, which is a key human value. If you have time, you must volunteer in any way, big or small, at your nearest Gurudwara and experience the joy of serving the society.

Here are nine of the Gurudwaras in India that offer spiritual solace along with delicious food!

Nestled in the Ladakh and Zanskar ranges in Leh, this Gurudwara is taken care of mainly by the Indian army staff of that area. Built in the memory of Guru Nanakji, it exudes serenity and spirituality. It’s a very quaint and quiet Gurudwara, right by the highway, close to the starting point of many treks.

This Gurudwara welcomes people with hot meals even in sub-zero temperatures.

You can also volunteer to serve the food or in the kitchen if you like.

They offer tea and snacks all the time during the day and the langar comprises of simple food but the taste of every item is heavenly! They usually serve it at 12:30 pm every day.

Legend: In the late 1970s, during the construction of the Leh-Nimu road, a large boulder was found by the workers in the middle of the roadbed covered with Buddhist prayer flags. The bulldozer driver tried to push the huge stone to the side, but it refused to move. Soon they were visited by several Lamas and other Ladhakhis who came to tell them the story of a Holy Saint they called Nanak Lama and the unyielding boulder. The stone was a 'mould' of their revered Lama Nanak that contained a hollow imprint of his shoulders, head, and backside. A demon pushed a large boulder down the hill to kill the Guru, but when it touched Guru Nanak’s body, it softened like warm wax and came to a halt against his back.

With a massive golden dome, white marble buildings, intricate carvings made by artisans from across India, Gurudwara Bangla Sahib is Delhi's shining glory.

It is open 24 hours for tea and snacks but full meals are served between 11.00 am to 4.00 pm and 7.30 pm to 11.00 pm. You can visit the kitchen and feel the energy of the bustle as they peel and chop vegetables, cook them, serve meals, and wash the dishes. Food is cooked in enormous vats with roaring burners beneath. Everybody is welcome to volunteer or to take a meal.

On an average 25,000 free meals are served each day. The meals comprise of Dal-chawal, sabzi-roti and kheer. The 'Kada Prasad’ loaded with ghee and dry fruits is also distributed.

Legend: Originally a bungalow belonging to Raja Jai Singh, the eighth Sikh Guru, Guru Har Krishan resided here for a short duration. During the time when there were smallpox and cholera epidemic, he miraculously healed and helped the people. To this day, the Sarovar water is revered for having healing properties and is taken by Sikhs throughout the world back to their homes.

Takht Shri Patna Sahib is the birthplace of Shri Guru Gobind Singh, the most celebrated guru of Sikhism. The Gurudwara, made out of pristine marble looks magnificent any time of the day. The entire Gurudwara is lit up post-sunset and is a sight to behold.

The langar starts at 7.30 pm and the food served is delicious and people come from all over the country to seek spiritual solace here.

Legend: The Patna Sahib Gurudwara is considered to be one of the holiest of the five Takths or seat of authority of the Sikhs. An ardent devotee of Guru Nanak, Salis Rai Johri transformed his lavish mansion into a Dharamshala where Guru Tegh Bahadur and Guru Gobind Singh also stayed.

This Gurudwara on the banks of the River Yamuna is an important historic Gurudwara for the Sikhs in the memory of the tenth Guru, Guru Gobind Singh Ji. When traveling from Vikasnagar or Herbertpur in Uttarakhand, as one crosses the bridge on the river, one enters Himachal Pradesh. The Aasan barrage and the flowing Yamuna add to the mystifying aura of the place.

Around the clock, langar accompanied by the sounds of shabad (religious hymns) impart a memory worth cherishing.

Legend: Paonta means foot. Hence, Gurdwara Paonta Sahib is situated at the place where 16-year-old Guru Gobind Singh dismounted his horse to first touch foot in the Kingdom of Sirmour. The Dasam Granth was written here by Guru Gobind Singh Ji. Poanta Sahib was built on the bank of the Yamuna River and began its life as a fort-like home built for the Guru and his family and ended up being a fortress with a Gurdwara in its interior.

Takht Shri Keshgarh Sahib is located on the edge of Mount Shivalik. River Sutlej flows nearby. It's the place where the last two Sikh gurus stayed and where Guru Gobind Singhji founded Khalsa Panth. It is one of the top five Sikh holy places and one of the top five Takhts of Sikh. The main building is massive, white colour and situated at a higher altitude. The view of the village from the Gurudwara is mesmerizing.

Being one of the Takhts, the langar served here is scrumptiously filled with the spiritual goodness that this place exudes.

Where: Gurdwara Shri Keshgarh Sahib is located in the center of the city of Anandpur Sahib, Punjab.

Legend: The city began as Chakk Nanaki, which was founded by Guru Tegh Bahadur Ji in 1665. His son, Guru Gobind Singh Ji, spent 25 years of his life in this city and became home to many historical relics. The Sri Keshgarh Sahib fort was built in 1699. The neighboring hill armies attacked Sri Anandpur Sahib several times but were never able to reach Sri Kesgarh Sahib because the fort was seemingly impregnable.

Away from the hustle of the city, Sri Hemkunt Sahib Ji has a breath-taking view, encircled by snow-capped mountains on all sides it exudes a divine tranquility. The place is situated at an altitude of around 4650 meters in the Himalayas and is around 275 km from Rishikesh and you can get here either by bus or car. It also has a natural lake that is believed to have magical properties.

Since it is situated on a hill-top, it is quite a climb up to Hemkund Sahib, especially with the cold weather. However, you are rewarded with piping hot and scrumptious langar. Even simple Indian meals like Khichdi and Sabzi taste heavenly and honestly, this is possible only in Gurudwaras!

Where: Govindghat, Joshimath, Chamoli district, Uttarakhand. It is located in the Uttarakhand Himalayas bordering Tibet and Nepal, it is accessible only between June and October.

Legend: The tenth Sikh Guru, Guru Gobind Singh in his autobiography, described the location of a lake nestled high up in the mountains where he had meditated in his previous birth. Following the description, the lake was located more than 200 years later, by Sant Sohan Singh, a retired Granthi from the Indian Army. And thus, the first Gurdwara was built in here. It also shelters the Guru Granth Sahib, the eternal scriptural Guru for the Sikh community.

Situated in between the mountains, by a river-side with a picturesque backdrop and a scenic view in the front, this Gurudwara has a hot cave inside. Even in the extreme cold weathers, there are hot water springs inside where you will find hot boiling water throughout the year and they have a calming effect on your body.

The langar served is delicious beyond compare and will fully satiate your hunger pangs.

Legend: During the third Udasi, the Guru Nanak came to this place with his disciple Bhai Mardana. Mardana felt hungry and they had no food. Guru Nanak sent Mardana to collect food. The one problem was that there was no fire to cook the food. Guru Nanak asked Mardana to put the food in the hot springs and pray to God. Miraculously, the chappatis and dal didn't drown they were fully cooked and floating on the water.

One of the five takhts in Sikhism. It is located on the banks of the River Godavari at the city of Nanded in the state of Maharashtra, this Gurudwara is built at the place where Guru Gobind Singh Ji left his earthly life.

Legend: Hazur Sahib marks the site where Guru Gobind Singh had his camp in 1708. After being wounded by an assassin, his wound re-opened a few days later when the Guru was stringing a bow for one of his Sikhs and the Guru Joti Jot after declaring the Guru Granth Sahib as his successor. The Sikhs built a room over the platform where Guru Gobind Singh would sit while holding his court and installed the Guru Granth Sahib on it and called it Takhat Sahib.

The most famous Gurdwara, Golden Temple, also known as Darbar Sahib or Sri Harmandir Sahib is on the must-visit list of every traveler. It seems the gold in the temple represents the heart of every volunteer here too!

The langar at the Golden Temple serves an enormous number of 50,000 people every day. On special occasions, the number often goes up to 100,000. Most of the working staff is made up of volunteers who, along with the 300 permanent sewadars, ensure the food is cooked and delivered on time.

In spite of the huge number, hygiene and quality are never compromised at the Gurudwara.

Legend: The fifth Guru Sahib of the Sikhs designed the structure, the Sri Darbar Sahib has four entrances in each direction, a sign of welcoming anyone who wants to visit. Over the next few decades, the Gurudwara was attacked and suffered damage, which was fixed eventually. Maharaja Ranjit Singh was the person who got the gold plating of the temple done.