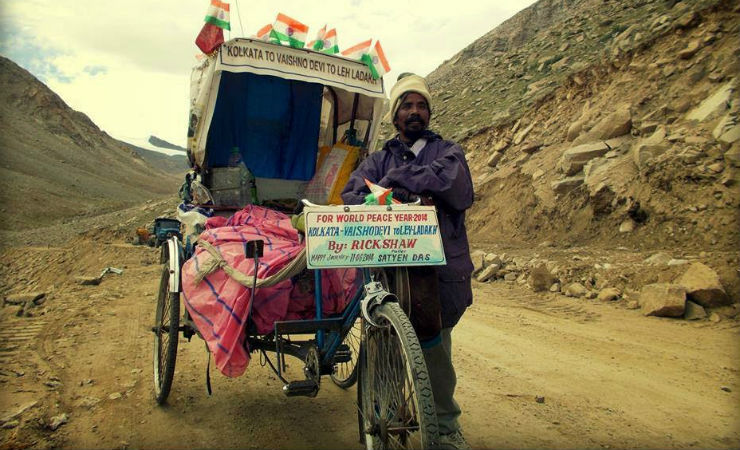 A 2,500km nerve-wreaking journey through mountainous terrain, snow-covered tracks, killer weather and sub-zero temperatures. All this preceded by a grueling 2,000 km ride along the highways that connect Kolkata with the northernmost tip of the country. Now imagine doing it on a rickety rickshaw, running simply on will power.

What sounds impossible is the life's dream of Satyen Das, who makes a living by ferrying commuters on his rickshaw in Kolkata.

Though his highly challenged financial background couldn't support his travel costs, but this couldn't act as a stopping stone in his path. Till now,he has pedalled to many places including Puri,Darjeeling,Haridwar and Vaishno Devi, covering almost the whole of the Northern India.

It all started in 2007, when he decided to pedal to Puri with his wife and 2 and a half years old daughter. After that, every year, he travels to some place or other with his rickshaw.

After his multiple successful trips, A local club got impressed by his passion and determination to undertake the adventure and financed his Ladakh Expedition in a Rickshaw.

He pedalled for two months and covered a 3,000-km arduous journey to reach distant Ladakh valley to become the first man to achieve the feat.

After riding his rickshaw for 68 days through Jharkhand, Uttar Pradesh, Srinagar and Kargil, 44-year-old Satyen Das said he had crossed the famous Khardung La pass in Ladakh on August 17,2014 making an entry into the Guinness Book of World Records for plying rickshaw at an altitude above of 5000 metres.

The club, Naktala Agrani Sangha provided him with a refurbished rickshaw with an enhanced braking system, new tyres and a new body made of light steel.

To record the feat, a documentary filmmaker from Kolkata accompanied him. He was also armed with maps to help him pick his way through.

Throughout his journey he pedalled to cover around 40-50 km every day and the night halts were in a religious place like temple or Gurudwara where he stayed safely for free of cost. Sometimes, he sought the help of the locals for his food and shelter as well.

There were times when he couldn’t find any shelter like Manali-Leh highway and had to sleep under the open sky. And for those bad days, he had pre-packed some dry foods to fill his hunger.

The best and the most challenging part of his journey was passing through an elevation of 17,582 feet at Khardung La pass which offers stunning views of the magnificent Himalayas.

As the road sloped upward, he had to get down from the rickshaw and pull it with hands through the rough mountainous terrain but according to him, the beautiful view of the Mountains kept him going.

Das has many adventurous tales to recount on encountering wildlife during his trip including how he escaped a herd of wild elephants in Jhilmil forest near Haridwar and how he was petrified after seeing an Asian black bear standing near him while he was resting at night in his sleeping bag near Sonmarg.

Another scary moment was when he came face to face with the elusive snow leopard in Leh but fortunately he was not attacked by the animal.

Proud moments during his journey were when locals and travellers stopped to click selfies with him and his rickshaw.

His journey was meant to promote rickshaw as a means of eco-friendly transport as well as to spread the message of world peace.

Having only elementary education, the unique road trips, according to him, was a great learning experience as he got to understand the culture and diversity of India by criss-crossing different states, cities, towns and villages.

With his strong will-power, dedication and high environmental-concerns, this 40-years old half literate person sets an example for many!

His next target is to explore Europe with his Rickshaw. Wish him all the best for his future-adventures and let's hope all his dreams get fulfilled!