The 'Blood Wall' of Golconda 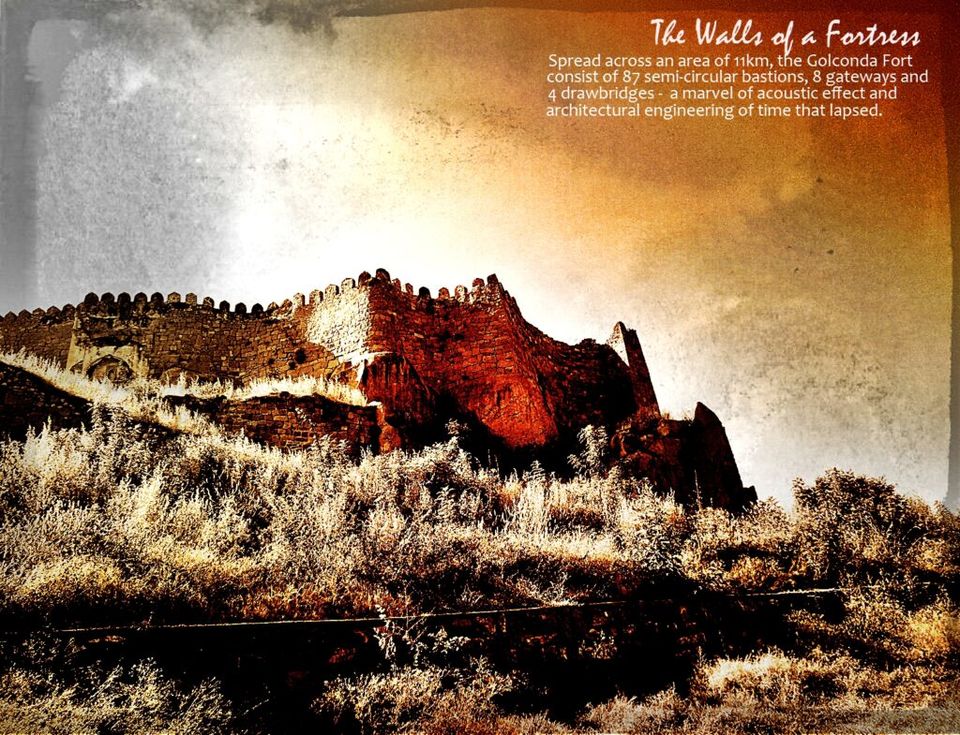 August 15, 1947-at the stroke of the midnight hour, when the world sleeps, India will awake to life and freedom. That's how the histories of India presented today. Alas! The story of India can't be a dawn-break or a 'midnight hour' instead, it's the story that one could find engraved on the stones, of temples, of forts, of mausoleums, and by the riverbank. I am in search of one such story, the 'Blood Wall of Golconda'.

Surrounded by approximately seven thousand lakes (most of which are nowhere today), the city of 'Mankal' named after goddess Mangaladevi must be the city of Sinbad-the sailor from Arabian Nights. The city, where emperors and nawabs of the city splurged on wealth, the merchants traded the exquisite pearls and diamonds, and the treasures of the world stored in its belly, un-dug. The story of the city of Hyderabad is as mesmerising as India.

To the west of the city, piles of debris and algal bloom turned the Shatam Cheruvu [Telugu, Hundred Years Lake], also popular among the locals as Shah Hatim Talab into dumping ground of animal and biomedical wastes on which illegal encroachment grew. Few miles (1.6 approximately) from the pungent historical lake stands the quadrangle fort, Golla Konda (Telugu, Shepherd's Hill) popularly known as Golconda is my today's destination.

Tested by time and centuries of natural disasters, the fort, once a mud-hill owned by the lines of Hindu Kakatiya kings of Warangal till they were decimated by the visionary but whimsical sultan of Delhi, Muhammad bin Tughlaq followed by Nayaks and Bahamanids. But, it was by the sixteenth century when a young Iranian Turkmen (or Persianate), Sultan Quli Qutb Shah-the founder of Qutb Shahi dynasty, the impregnable fort regained its prominence. It was Quli Qutb Shah [ aka Bada Malik] who gave the fort a facelift and replaced the mud walls with large and small granite stone blocs. The kingdom of Qutb Shah extends till the south of Krishna River, and a line of hills of Bidar on the southwest formed its frontier.

Seven generations of Qutb Shahi lived, prospered, and faded in the precincts of Golconda. The city of Hyderabad eventually fell to Aurangzeb, the last-mighty Moghul ruler who has his eye on the beautiful burgh for its natural treasure troves especially, the diamond and pearls. That's enough for today's history lesson. I am not tracing the lost citadels and marks of either king instead, looking for the blood wall of Golconda; so let my journey begin.

Dodging the ear-splitting traffic snarls, tourist musings, and women in burqa haggling with street-side toy seller, ice-cream sellers, and auto wallahs I made my way entering the fort through its main gate, Bala Hissar Darwaza on the east; opposite to Bada Bazaar Road. The lofty gate with Quranic scrolls inscribed and a pointed arch high enough for an elephant with howdah [seat on its back] enter the fort with ease. Two ornate peacocks on either side of the gate welcome the visitor to the fort.

In yesteryears, a chaperone would have come for assistance, ask the name, enquire the reason to visit and then, run to the open portico and clap to inform. The fort with acoustic marvel (one of its kind) alerts the king engages in frolicking or playing hide-and-seek with the women at baradari (open balcony); at the highest point of the fortress.

Although rumoured, the fort having a secret underground tunnel at the 'Durbar Hall' that leads to the foot of the hill on which the fort stands, Ibrahim Quli Qutb Shah -the fourth Qutb Shahi king and youngest son of the founder would escape every night to meet Bhanumati, the courtesan-queen. Earlier, when the family embroiled into mayhem and Ibrahim's eldest brother Jamshed killed his father while he was praying at the mosque (at the top) and other brothers, Ibrahim escaped through the secret tunnel to seek refuge with Bahamani kings.

Oh, I am again getting diverted; let me not but the fascinating of Golconda and its rulers are nothing less than the fascinating Arabian tales. I will write about them later, for now, let me look-out the 'blood wall'. Heading right from the clapping portico, I walked through the stony pathway lined with arched rooms, possibly serving as horse stables and stay-inns for kings' army. The elevated path leads to the three-hundred odd stone blocked staircases winding to baradari, the summit at the top. Climbing the slippery, sharp-edged stairs cautiously and thin dusty trail covered with wild shrubs and fafards I reached the Ibrahim Mosque on the third-floor of the fortress.

The humble mosque flanked with two stuccowork minarets is a plain, whitewashed wall with three arched prayer hall. Built by Ibrahim Quli Qutb Shah, the mosque is still functional overlooking the city spread before, Everyday, the muezzin would climb the stairs twice and after seated on his prayer mat facing the Ka'aba would call out azaan with a soulful nasal rendition.

The priest of the Mahankali Temple, adjacent to baradari located few miles atop the mosque would follow the morning aarti with copper and brass bells ringing in rhythm.

The sidewall connecting the mosque and temple layered with white, blue, and black granite stones vacuum-pressed with limestone rise steeply and almost at ninety-degree to the ground level. On the left side of this wall, before the water tank, a wall stands almost protruding and unfamiliar to the otherwise, semi-rounded architecture. The undecorated two-storeyed high wall raised over the rounded bastions is blocked with a curved patio is my destination.

The wall rumoured to be used for punishment is of high-rise building from the ground surrounded with heavy boulders, sharp rock bed, thorny bushes and wild acacia trees. Though, Sharia wasn't prevalent much among the Indian Muslim rulers before Aurangzeb; death by stoning or eye gouging or trampling under elephant is common judgment to culprits charged with theft, adultery, or sedition.

After the qazi (judge) pronounces an accused and the king ratifies the decision, on the assigned day, the accused is fetched from the prison by a train armed sepoys. The crowd already gathered at the open ground near the Rang Mahal, and some mounted over the outer fort wall screams 'death' while the family of the guilty silent leave the city fearing death. Before the assigned hour, the prisoner is bathed in the tank beside the wall and brought before the imam or priest for his last prayer. The imam sahib or the pundit would read qutbahs and chant selected sermons from a holy text, blesses and anoints him before the sepoys drag the prisoner to the final destination.

Locked in chains, the culprit often cries for mercy or sings eulogise to please the king, but the hardened criminals and rebels would calmly walk the stairs to meet the executioner standing at the top of the wall. A heavy iron ball chained to the ground is tied to the feet and the executioner, in his drunken stupor to kill the conscience will tie the hands to the back. The kotwal (commissioner) standing at the plinth raises his hand to drop the handkerchief as the crowd screams in jubilation.

The executioner advances to push the accused from the wall. The man falls over the boulder with the skull cracks. The lifeless body bounces over the boulder as it falls and turns into a limp. The iron balls chained to the feet further dragged the culprits skidding through thorny bushes, sharp and edgy stones to the pit dug at the bottom. The crowd goes berserk and mad as they ran to molest the dead man. The sepoys with their pointy spearhead struggle to keep the public at bay while the limp body is escorted to the mortuary, behind the horse stables for ceremonial rites.

While staring at the blood wall, I tried to recall the moment and looked down at the horse stables and royal chambers, the stone pathway, the clapping portico, the entrance door. Civilisation has come a long way so, does the wall. With time, the wall that once smeared with bloodstains, dead skulls, and call of shrieks today having the names of loving couples scribbled over it, not one, not two; but hundreds.