Vipassana meditation 'An adventure within self'

The Need of the hour

For the past few months I was trying so many new ways to make myself jubilant be it travelling, paragliding, sketching, blogging, etc but all of that worked only on a superficial level which I felt was short-lived elation. I was looking for something perpetual, something real which works at intellect. So I tried Vipassana.

The meaning of vipassana is 'to see things as they really are'. Vipassana is an ancient Buddhist meditation technique where sole focus is on your mind and body. It comes under 'mindfulness' type of meditation. There are no sculptures or pictures of anyone involved throughout the course or even in the campus. There is no worship of any god/religion/person whatsoever involved. It is a 10 day long course where teachings are given by Dr. S.N. Goenka through audio and video mode at all centers worldwide, all you have to do is follow them step by step. They call this process as deep surgery of mind that oneself performs without leaving any mark. It can give common man the closest possible experience of living life as a monk for a while (just that you wear your own clothes, nothing apart from that is yours). There are 160 Vipassana meditation centers throughout the world out of which 80 are in India. I registered myself at Dhammananda Pune Riverside location. Its a beautiful, peaceful and spacious retreat located at a remote location 40kms from Pune city. Anyone can look for a course at any of the locations and register at www.dhamma.org website. 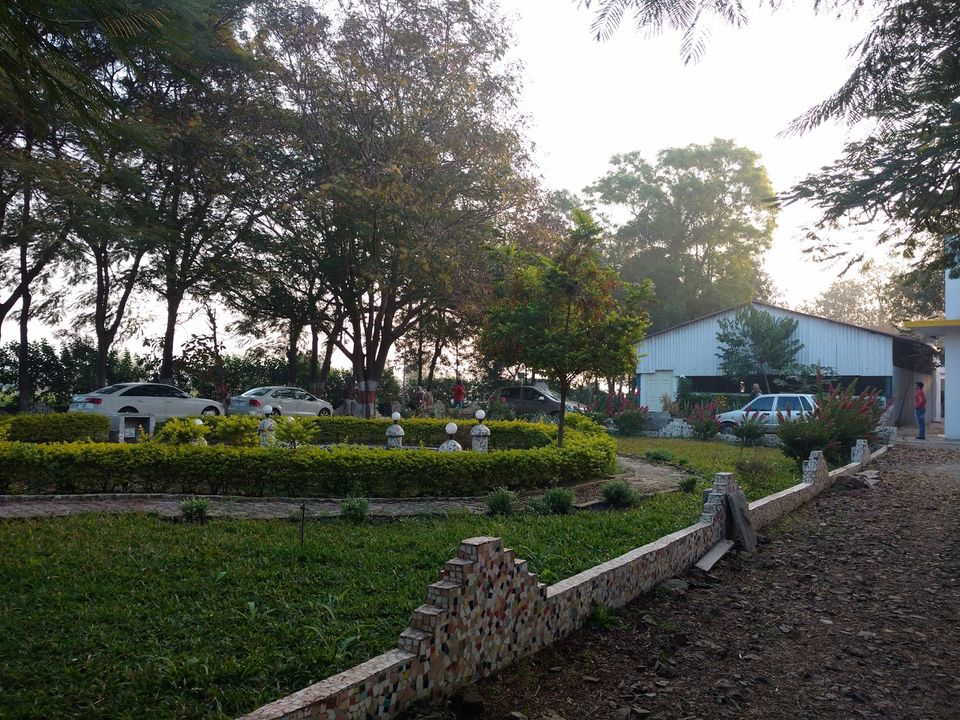 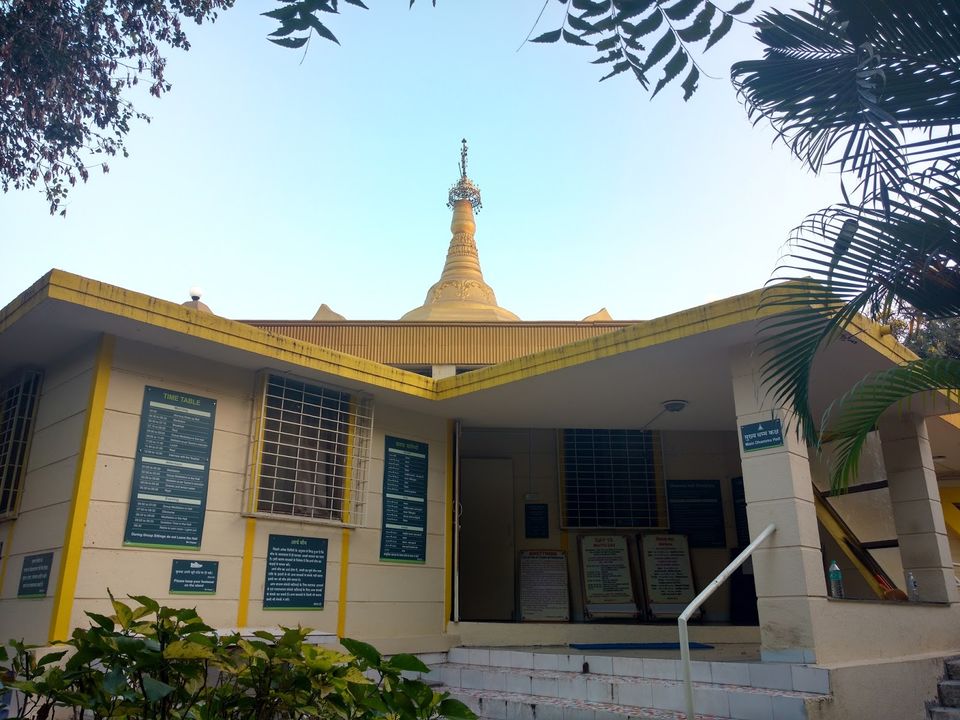 It is a 10 days residential course where one follows a strict time table throughout the day. Everything is taken care of (teaching, food, accommodation) and all one has to do there for 10 days is wake up-meditate-eat-sleep. Ah, that sounds easy but when you have to sit cross legged on floor for 12 hours a day and deal with nothing but your untamed mind, its one hell of a mental workout (and those legs & back do make you go bonkers in pain). Day starts at 4am with a wake-up bell and meditation starts at 4.30am. Meals are simple (non-spicy) and are served twice a day which means breakfast (at 6.30am) and lunch (at 11am). There is no full meal served in the evening but there is a snack break at 5pm where 1 piece of fruit (per person) is available with milk/tea.

Some of strict key rules to be followed:

Not allowed to abandon the course.

Not allowed to step outside campus during entire duration of course. 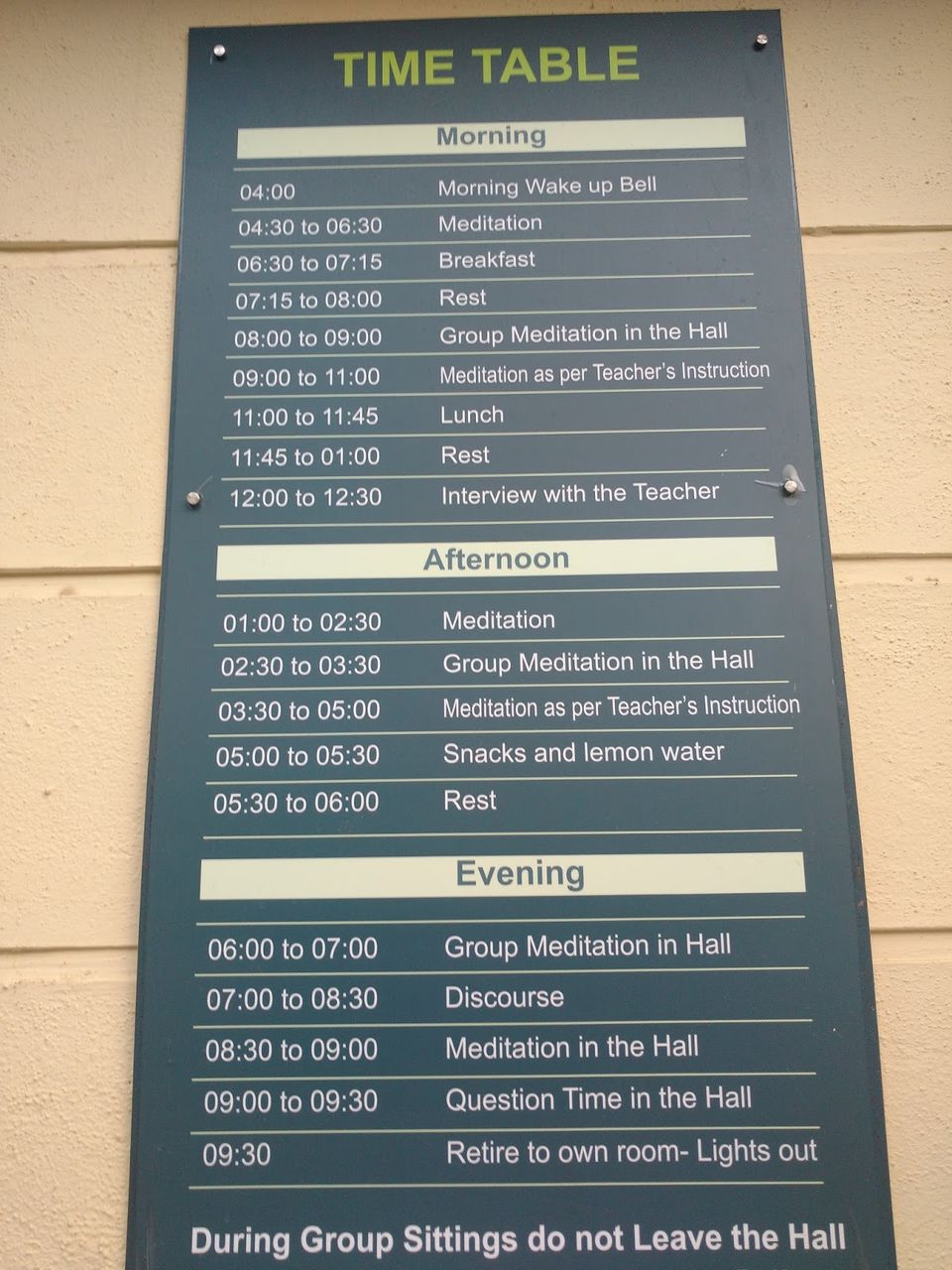 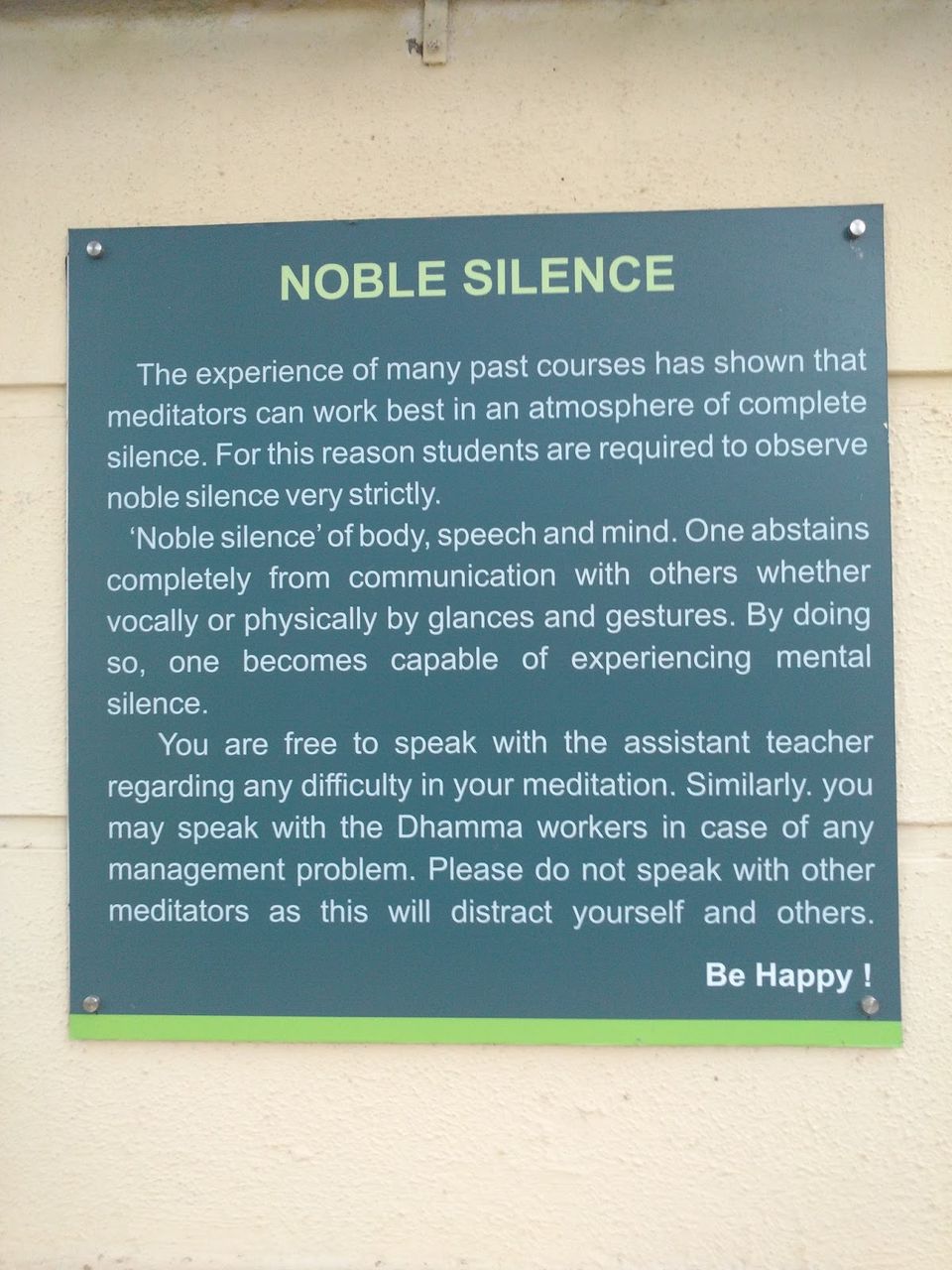 Information so far was generic, here starts my experience about the course (please note that these experiences are my personal and may vary for each individual):

Day 1 to Day 3 (hold those untamed horses of mind)

There was a meditation cushion assigned to everyone in meditation hall and each individual had to sit at same spot during entire course. First 3 days of course were for Anapana meditation which involved observation of breath. Each and every inhalation and exhalation had to be observed at the nose. Sounds like piece of cake, but the mind would run away just after watching 5 breaths! Had to drag it back as soon as realized its gone just to loose it again. This was all concentration game, 2 days of practice and uninterrupted observation of breath increased from few seconds to few minutes. Third day we started observing change in temperature of breath and sensations around nose and upper lip. Back and knees were crying in pain with passage of every minute. 3 days passed and I was just trying to get hang of my untamed mind while following incredibly long meditation hours. These 3 days were tough for both mind and the body. At the end of each day, there was a video discourse where the logic behind that particular day was explained with scientific reasoning and it made all the sense of what and why I was doing everything.

During afternoon session of fourth day, Vipassana meditation was taught which meant observation and acceptance of sensations throughout body. There are various types of vibrations/sensations happening every second in all parts of our body, this technique develops a mechanism where our mind becomes capable to observe and read those sensations at skin level. Learning this is referred to as deep surgery of brain that is self performed. With the practice of this technique over a period of time, one goes deeper and deeper under the skin and becomes capable of even feeling the presence of various organs.

Observation starts from the top of head and ends at toes covering part by part entire body. On same day evening Adhitthana was announced for 1 hour group sittings (that happens thrice a day) where you try not to change body posture for an entire hour (and still meditate in sheer pain). By sixth day, I was able to observe strong sensations in some parts of the body and faint sensations at other parts (each body part showed distinct sensation). Every session went on with feeling of waves, earthworms, ants, spiders moving over the skin and it felt very spooky!

By the end of sixth day, I felt very strong sensations on face and back, mild sensations on arms and faint/no sensations on shoulders, chest and stomach area and only pain in legs. As per instructions I was supposed to focus on one part at a time but out of sheer curiosity I once focused on my entire upper body together (back, chest, stomach, shoulders and arms combined). I did it for a maybe 5 seconds and my body heated up by few degrees immediately. I got freaked out and couldn't believe what just happened! Opened my eyes and jacket, cooled down for 5 minutes and tried the same again just to cross check my myth. It happened again and I again couldn't believe. I did such 4 attempts to have a concrete result and it resulted the same heat up all the times. I was feeling as if I received a superpower. Since I wasn't allowed to talk to anyone, I controlled my happiness and digested my superpower. This was the moment when I started to imagine my body as a laboratory equipment and got curious to experiment more. I connected the dots already and instead of observing body part by part individually, started to observe seamless sensations throughout the body as one single unit.

From seventh day onwards we were instructed to observe seamless flow of sensations throughout the body which gave me a nod that I was heading in correct direction already. I already had a seamless flow from head to toes at the level of skin so I started going deeper millimeter by millimeter. There was a moment when I passed over the chest area, I felt pain on left side. I got curious and focused on that part more and more. The pain got intensified, heartbeat felt louder and clearer. Soon I was in tears because of the pain, but I kept exploring. I met the teacher during the one-on-one interaction session that afternoon and discussed my problem, he told me its the heart and advised not to focus on it so much and just pass it quickly when you go over that area. Same evening while practicing my sensations touched my lungs, they also gave painful sensations like the heart. I was enjoying my laboratory and kept exploring. Whenever regular head to toe sensation scanning felt boring I explored my organs. In proceeding days I explored my skull, ears, jaw, trachea (wind pipe) and esophagus (food pipe). By now back pain was gone but in legs all I sensed was pain, pain and more pain.

It was tenth, the last full day of course. I hadn't spoken from past 9 days and felt so much peace inside. Noble silence was to be opened at 10am and I was curious how would it feel to speak again but I was happy with the silence. After a small meditation session called Maitri meditation where the aim is to spread happiness to others, noble silence was opened. As we Indians do not have a conservative nature, everyone started talking loudly to each other as soon as we stepped out of meditation hall. To hear that many loud voices at once was a shock to the ears and I soon had pain in ears. Collected my mobile phone after 9 days, called up my mom but couldn't speak much. My voice was stammering, I couldn't speak properly for 3 hours and the day passed accepting the noises. Day 11 started again with morning bell at 4am and last meditation session at 4.30am which was followed by a nice breakfast of kheer (An Indian dessert made of milk and rice). That felt soothing after mind's successful operation and I headed back to the real world.

From the awakened mind

A friend of mine says that going for Vipassana is the best gift one can give to self and I now totally agree to his saying. This course trains the mind to accept every situation the way it is without being judgmental about it just like how every sensation was observed and accepted the way it was at experiential level. I got to see the ugliest and the cleanest state of my mind over a span of these 10 days. There were few moments where things got so tough that I wanted to run away but then I realized what would I be running away from? Food was good, accommodation was good, what was being taught was good, it was just my mind and the junk inside it that wanted me to run. If I would have left the course in the middle, I would have come back with all the junk in addition to a feeling of disappointment. There was a lot of hard work and dedication that I did put in during the course and the result I received was totally worth the effort.

Someone wise said 'our primary relationship is with ourselves and then follows all other relations', with this effort I strengthened my self relationship and now I believe that all relations will work effortlessly be it with parents, family, friends or work.

Should you try Vipassana?

Anyone (nationality, age, gender no bar) can enroll for this course at any of the 160 worldwide centers. The earlier you do it, more time you get to reap the results for the rest of your life. Also you recover quickly from the physical and mental fatigue during the course if you are young. Moreover its easier to grasp the technique and concentrate better for youngsters. If one works properly for these 10 days, a positive change in attitude is bound to happen. Remember that this course is not a vacation but a clinic for intellect for self improvement. You be the judge if its worth your time and effort! 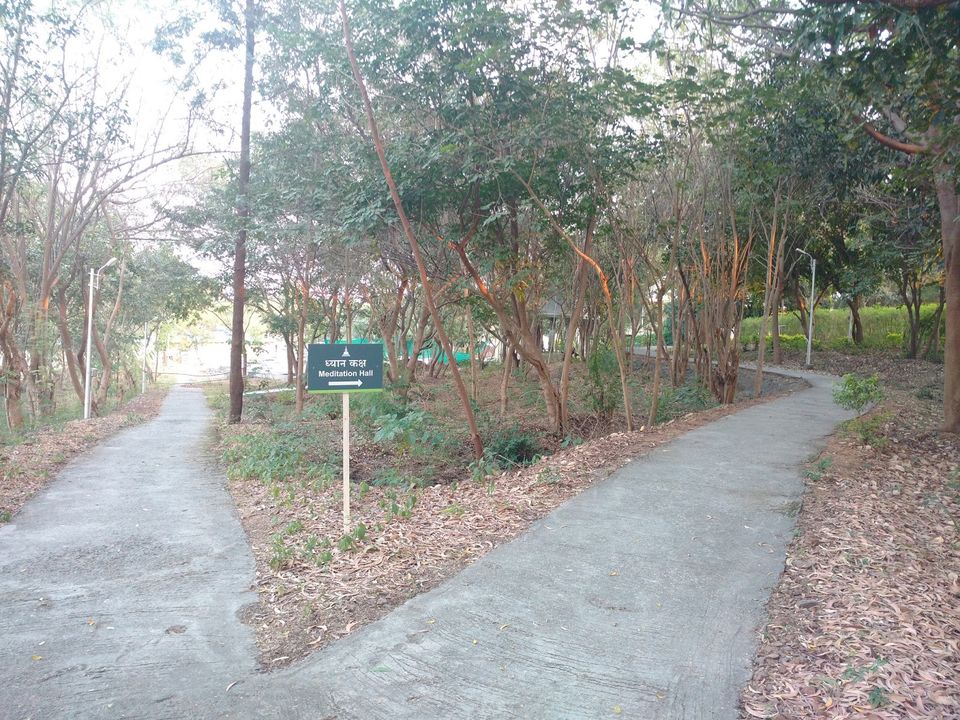 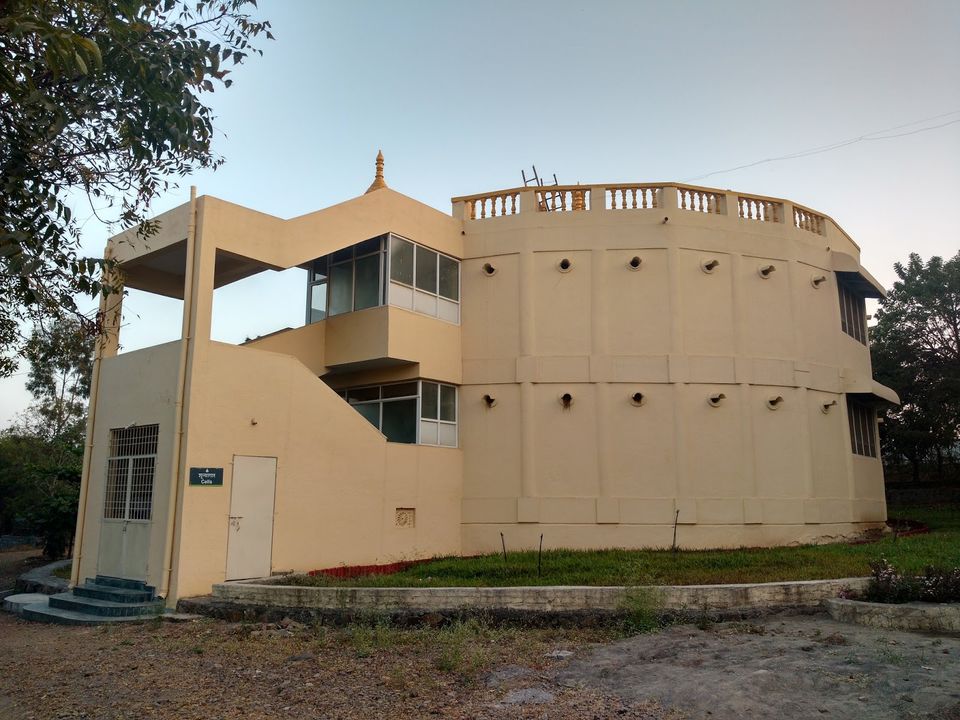 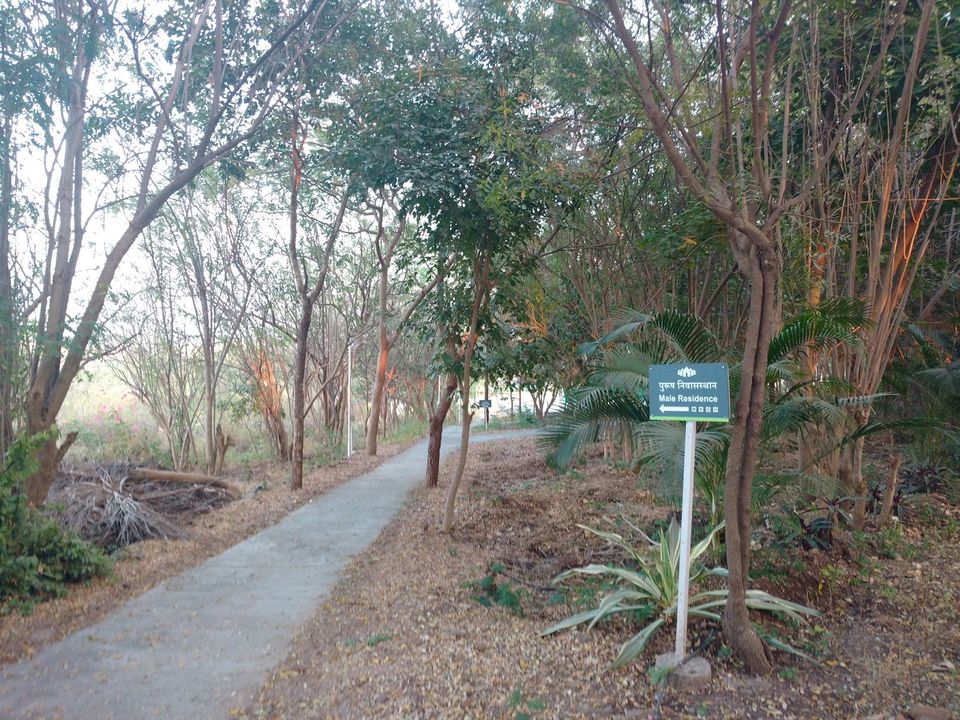 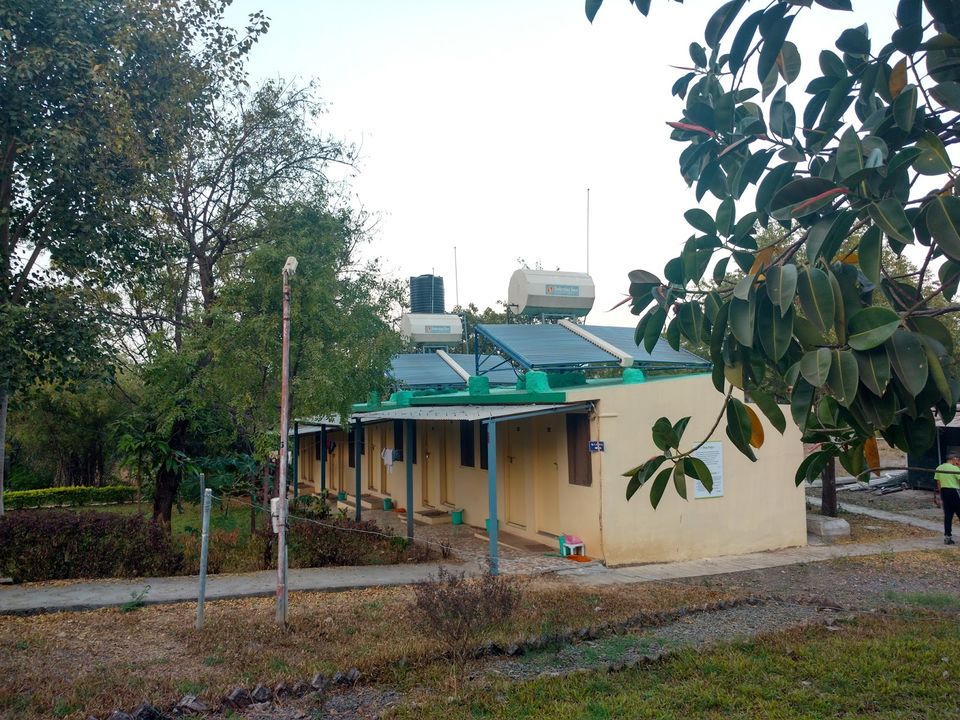 One of the residential complex

Any questions regarding Vipassana meditation or about my experience? Feel free to post them in comments, I will be happy to answer all of them.

This blog was originally published on 'Travel tales with Nakul'