Jaisalmer Travel GuideJaisalmer TripsLife Lessons I Learned From The Land Of The Lifeless- Jaisalmer Decoded.

Life lessons I learned from the land of the lifeless- Jaisalmer Decoded.

It is in the moments when you are splashed away in a surge of emotions, sweeping you away into alien experiences, that you learn the most. Experiences, whether positive or otherwise have an impeccable energy that stirs within us a knowledge that is so basic, yet so complex; one that can ever be imparted to us in any manner, it’s only that experience makes it more understandable. And thankfully for us, we only have the right to choose the sequence of the choices we make, neither their synchrony, nor serendipity.

Talking of choices, though, makes the mention of a journey much obligatory, the choice of going away to an anticipated new year break; into an unplugged and solitary land; in the dusty and deserted region of Rajasthan.

In what was expected to be bunch of busted memories and couple of days at leisure with mischievous plans of the bro-code arising in the mind; we forget the basics, that we only have the power to plan, the outcomes are indeed balanced on an intangible gauge; and the actual occurrences often turn out to be different, though better than planned in our case, of course!

It begun with an overnight travel and cut short, here we were, in the middle of the Thar desert, in a town washed away with a golden hue; swearing at the soul-freezing temperature as it chilled down our spine, a few hours before the dusk. The trauma that we went through, courtesy the atrocities of temperature, was rough, but was aptly rewarded, and in the best possible manner. What I must refer to as a visual treat was skies, empty, deep strokes of blue gradually going lighter towards the east, the mist all around was a magical veil that had carefully hid the beauty of the town that’s said to be golden, in its blanket over the course of that night but the veil began loosening its hold with onset of the morning sun; the open roof overlooking wide stretches of empty, deserted, land meeting the sky at horizon showcased the dawn in its frame; the rays, mixing in the palate of skies, hues of yellows and oranges, were quite a sight. The next moment we saw it, the sun gradually rising from the land, and its warmth very feeble, though, fueled us somehow, or perhaps it was the poised perfectness of the moment that plugged in us, a pause.

It did feel special to be able to witness, what-would-be-said, the last sunrise of the year, and philosophically, it was a bounty that I had realized is granted each day, only for us, the trauma, ‘which in my case was the brain-freezing coldness’, often tends to overtake this reward from us. 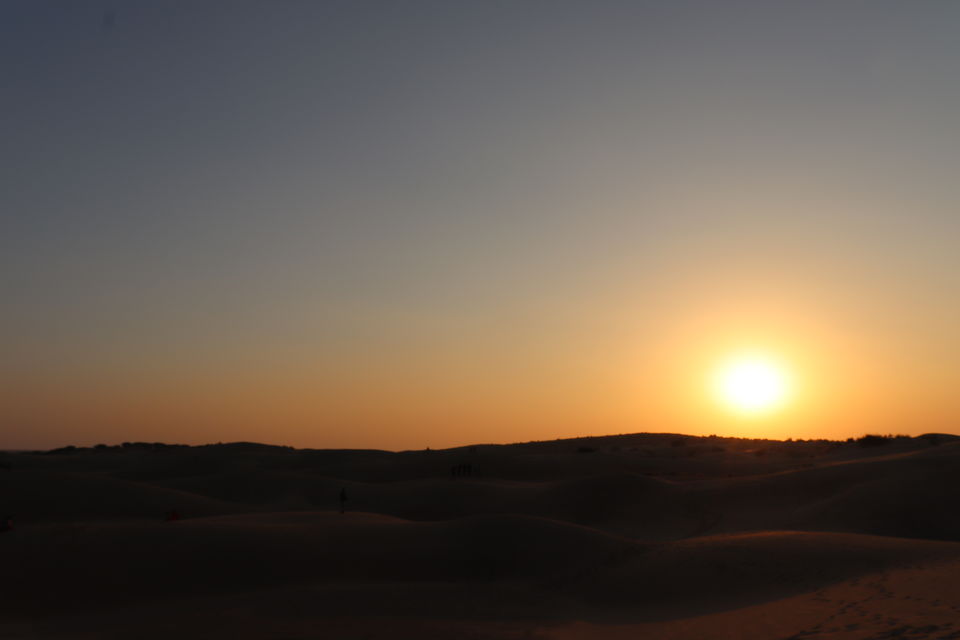 It was new year’s eve and plans to party were of course building, which indeed were obvious, though this time what wasn’t obvious was that, that we refrained from the bright and booming sessions of booze and bounce; and rather chose what was exactly the opposite, a calm, and relaxed evening of celebration. And so here we were, decked up for a voyage; and in no time, first the vrooming engines then the grunting camel rides of course, helped us make way to the camping sites. Here, amidst the golden dunes, was a profound sense of equal synchrony of silence and stillness. A calm evening here was spent gazing at the sun being engulfed into the horizon, as if the sandy dunes were swallowing it into themselves and with the sun gone into sublime sands, the moon came into the picture; seeming like a coordinated script of a blockbuster movie. A chilly winter twilight moon, couple of folk-dancers and singers, and with some co-travelers, we sat in the beds of land with sizzling fires around us, failing to convey their warmth, whispered their insignificance in a vast chilling desert. And while we both sat facing the flare, stoned not only by tonics but the perfectness of the moment, time and again appraising the wide, lit sky with twinkling stars; all we could sense was satisfaction. 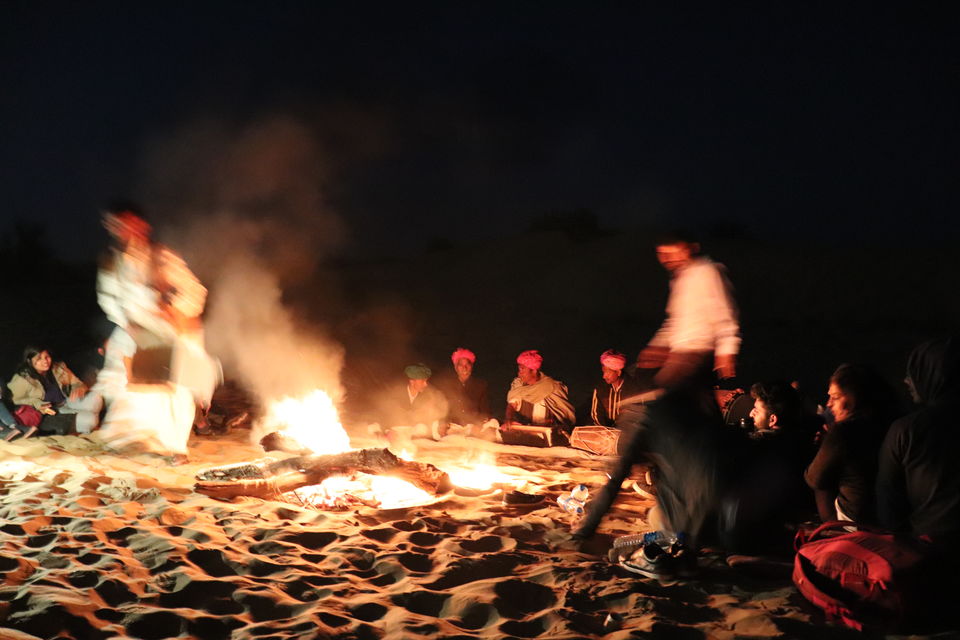 There, in the air of the desert was something that brought peace to the soul, something that made us realize a comfort; the stillness of the sky, the coldness of the moon, and the silence of the desert, everything around us together conspired against our metro lives and questioned every moment, ‘is this hustle necessary?’

Every second of that moment was a thought in mind that made a realization evident. One, that it is necessary to stop, watch, and let things be. Two, there is a lot that we have got, we just always are too much consumed in searching the wrong pockets every time.

The night passed and it was quite a show to see how colors turned upside down within fractions of seconds; how silence turned to a great buzz just by ticking of a second was something really cool. It’s always a thrill to experience how time rolls itself while unrolling our own selves. There is a whisper every place wants to convey, a lesson that every second aspires to teach, the only condition being, we are awake enough to perceive it with patience.