Chadar Trek - Experience of a Lifetime 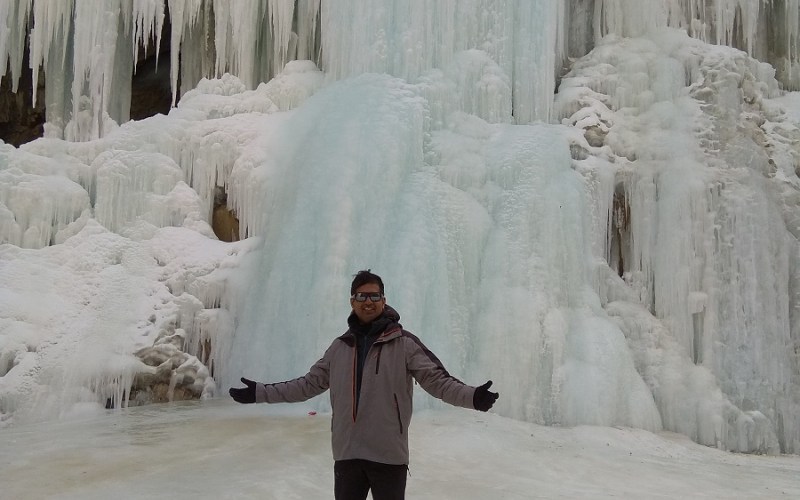 I remember falling in love with the concept of treks and with the opportunity to test my utmost limits that comes along with it. Through the years since 2001, I've never ceased to achieve the same and seldom do I get nervous about an upcoming trek, but Chadar trek was different. The Chadar trek took me back to my roots to reignite my unwavering determination to be a better trekker than I ever was before. As a sign of gratefulness to the place, I will be narrating the story of an adventure seeker who has experienced innumerable wonders of nature but still got mesmerized by the icy paradise that is the Chadar Trek.

Towards a frosted beginning: As my plane landed on Leh airport runway, the pilot announced that the outside Leh Ladakh temperature was -10 degrees. I was soon going to move away from comfort of the plane to the harsh cold weather outside. I was well equipped for the cold having packed my fleece, down jacket, gloves and balaclava in my hand bag. As I exited the pane I was embraced by the beautiful sights around the airport that I had only been acquainted with in books. It didn't take much time for me to conclude that the books that I've been reading have been undermining the true colors of Leh. I was barely holding back the irresistible urge to drop my bags and proceed to climb the frosted peaks of the place. I was so lost within sight of them that it took me a while to notice the bitter cold that was chewing away my skin. I booked my taxi at the counter just outside the airport and proceeded to the guesthouse where I was to meet my other batch mates. I had to spend two days I in Leh to get accustomed to the steep change in weather. Luckily, those cold winds were an old friend of mine.

Despite the freezing temperatures, I couldn't hold back from exploring every nook and cranny of the place before the big day. The locals caught me up with their culture as I explored their markets for souvenirs. With some last minute shopping from the army store i was ready for the big day.

And the journey begins: The day I was waiting for years had finally arrived. I embarked on my quest to witness the frozen waterfall of Nerak. The fact that I was accompanied by some of the best batch-mates around made my journey even more interesting. I wish the drive to Tsomo Paldar was a little longer. Although, I did manage to take some beautiful pictures at Gurudwara Pathar Sahib which just happened to be one of our designated stops. After having a conversation with the locals and having a cup of hot coffee, we continued our journey.

Eventually, the car came to a halt. We were standing at the edge of the road, and I managed to catch a glimpse of the Zanskar river which seems to be the true marvel of nature.

Dangerously Beautiful: This is where a tiny shiver of fear gripped my heart. I've previously climbed and conquered steep mountains without feeling anything nearly relatable to how I was feeling now.

There was a thick layer of snow above the thin surface of the ice. We were warned to measure every step that we take since the danger of the ice cracking underneath our foot always loomed in the air. After a couple of minutes, I got used to it, and my walk transitioned back to its normal state. It started feeling like any other hike, the only difference being that it was coupled with a stunning view and a frozen river beneath my feet. I can never emphasize enough on the beauty of the frozen Zanskar river. I completely got lost admiring the fact that I can observe stagnant droplets of the river just there, frozen in time. I was just standing there enjoying the view until one of my batch-mates broke me out of the trance. The Chadar Trek was a fantasy that turned into a beautiful reality for me.

A few nights under the star: I thought I already knew of the sights I would be experiencing in the journey, but I'm glad to say that I was completely wrong. As everyone was getting cosy within their respective tents, I decided to step out to introduce myself to the place personally. As I stepped out, I was awestruck with the innumerable stars dancing within the canvas that was the night sky. I have previously witnessed a sight comparable to this, but this was certainly on another level. I decided to make the most out of it by admiring it until the absolute freezing temperatures got hold of me.

Moving towards Tibb cave campsite: I woke up to noise of our kitchen staff who were busy preparing tea for us. I felt an emotion that I could not explain as dawn befell, and the sun-rays bounced and played around, lighting up everything in sight. I couldn't help but felt a little sad while the joy of warmer temperatures was overtaking me. I was sad because it would be a few hours until I could experience the wonders of the night again. Although, the moment I noticed those tiny rays reflecting the frozen river my sadness took a backseat. We were now supposed to reach the Tibb Cave by nightfall, and I was completely excited.

This was the day when I experienced my first fall upon the thick layer of snow over the frozen zanskar river. For a moment there, I almost thought that it was going to be the worst moment I would experience during the course of the trek but the only thing I felt was the snow hugging me as I came to the inevitable sudden stop. I and my batch-mates just laughed at that instant and carried on our journey.

Through yet another day of marveling the wonders of nature, we reached the Tibb Cave campsite. Previously, I thought of nature as an artist but witnessing the sharp inlays of the Tibb Cave; I was convinced that nature was a skilled architect as well. Within the embrace of yet another night where stars adorned the sky, I waited patiently for the next day, the day when we would see the frozen waterfall of Nerak within our sights.

The frozen wonder: Through another long yet gorgeous trail, we finally arrived in Nerak. This is where the Chadar Trek culminates beautifully.

The frozen Nerak waterfall looked like the reminiscent of gentle yet quick brush strokes of vibrant colors; it was painted with ice as a medium. We got the chance to get up close and personal with the spiked edges of the frozen waterfall, and that opportunity made the entire journey worth it. We clicked dozens of pictures to remember this moment and to mark yet another conquered trail within our adventure book. I was delighted when I realized that we have many more sights to discover further.

Far from home: As we traced our steps back to the Tibb Cave campsite, the urge to go back and settle within the frosted paradise of Leh grew. Our guide had told us that the weather changes in an instant around the place, but we only realized that to be true while we were returning back. Around some parts, the thin sheet of snow had built up to surround the edges of the river.

I felt as if it was an entirely different trail. Before moving ahead, I had a few more moments with the place before I headed back to reality waiting for yet another chance to revisit the chadar frozen river trek of Zanskar. I and my batch-mates, at this point, had bonded well and it almost felt like a family. We clicked so many pictures that I've honestly lost count at this point. We enjoyed our last few days in the place by sitting under the night sky talking about what other treks we wish to experience after this. Most of us came to the conclusion that the Chadar Trek had cast a magical spell on all of us and it would be relatively difficult for other places to get on par with this journey.

We were blessed to have booked our trek with one of the best Chadar trek organizers which was a local agency from Leh. (Altitude Adventure India) Their entire staff was from the zanskar region and they took excellent care of our needs and safety. The entire trek conducted by them was awesome

Back to reality: The Chadar frozen river trek could be best described as an escape from the everyday hustles of reality. It is almost as if it transports you to another world, a world where there is nothing but adventure and joy. I went to the Chadar Trek in hopes to test my physical limits but what I got along with that is the chance to explore myself both mentally and spiritually to know myself better. Not only that but I now have a new perspective to admire nature from, owing to the nights I spent underneath the star-sprinkled heavens of Leh. Check more trek blogs on here.