As inky darkness seeps through the skies and red tasselled lanterns are lit, the people of Japan haunt the recesses of dimly lit izakayas (informal Japanese pubs), street-side ramen shops, ancient tea houses with wooden latticed doors, ramen-ya restaurants and karaoke halls for a simple but delicious bowl of ramen.

Ring-stained wooden tables bear the brunt of perspiring bottles and glasses. Outside in the night air, people sit on red stools noisily slurping bowls of broth and ramen doled out by roadside ramen stalls. Conversations are punctuated with the aroma of umami-flavoured ramen cooking, steaming bowls are ferried to tables for people to dig into a hearty meal after a long day. It’s simple, homely and comforting.

By now, all of us have been introduced to a variety of ramen in the form of instant squiggly noodles with dubious looking dried up bits of veggies which may or may not prove to be pleasant surprises in your bowl of chow. Instant noodles, which afford convenience to millions, have proved to be a boon to many university students, not-so-great-cooks and just lazy sloths in general. So much so, that when a Japanese poll was undertaken to find out which invention was the greatest in the 20th century - a unanimous verdict went in favour of Momofuku Ando, the inventor of instant noodles!

In the mid-19th century, the Meiji restoration allowed Chinese immigrants to settle in Japan, who in turn introduced Japan to humble home-cooked ramen. By 1950, ramen was everywhere in Japan; being served to people from portable stalls or vendors hawking their ramen.

From there on Japan made ramen its own, with distinctive flavours of ramen arising from different regions with various soup bases (shio ‘salt’, shoyu ‘soya sauce’, tonkotsu or miso), types of noodles and toppings. Shops in the same region also tweak recipes to add a signature style to their ramen.

Here are the four main kinds of soup bases found in ramen:

A salt-based soup broth, this ramen is light and almost transparent. The broth is prepared by boiling chicken bones and seafood such as dashi stock, dried sardines and bonito flakes. This is the traditional way of flavouring ramen broth.

Shoyu is the most commonly eaten ramen and gives off the fragrance of soy sauce and the richness of the stock of simmered chicken bones, seafood and occasionally, pork bones (tonkotsu). Every shop's shoyu broth tastes different because of the soy that they painstakingly make from scratch.

Miso ramen owes its piquant, savory flavour to fermented Japanese soy paste which is the broth's main element. There are types of miso such as charred miso, barley miso, rice miso, white miso and red miso to mention a few. Sauteed vegetables, sweet corn and glistening butter are also added to miso soup making it an irresistible treat.

Tonkotsu broth is made by boiling pork bones. With its pungent, sharp smell, its got its fans and haters. The noodles in tonkotsu broth are usually thin and the broth is complimented by onions, chashu pork, bamboo shoots, mushrooms and pickled ginger.

Away from packed ramen noodles lacking in flavour and ubiquitous in local grocery shops and 24/7s, let's look into the raging ramen culture in Japan to appreciate the history and mind-boggling skill that goes into a simple bowl of noodles and broth.

The variations in ramens are vast and differ regionally. Here are a few types of ramen according to Japanese regions that every epicurious traveller must sample. 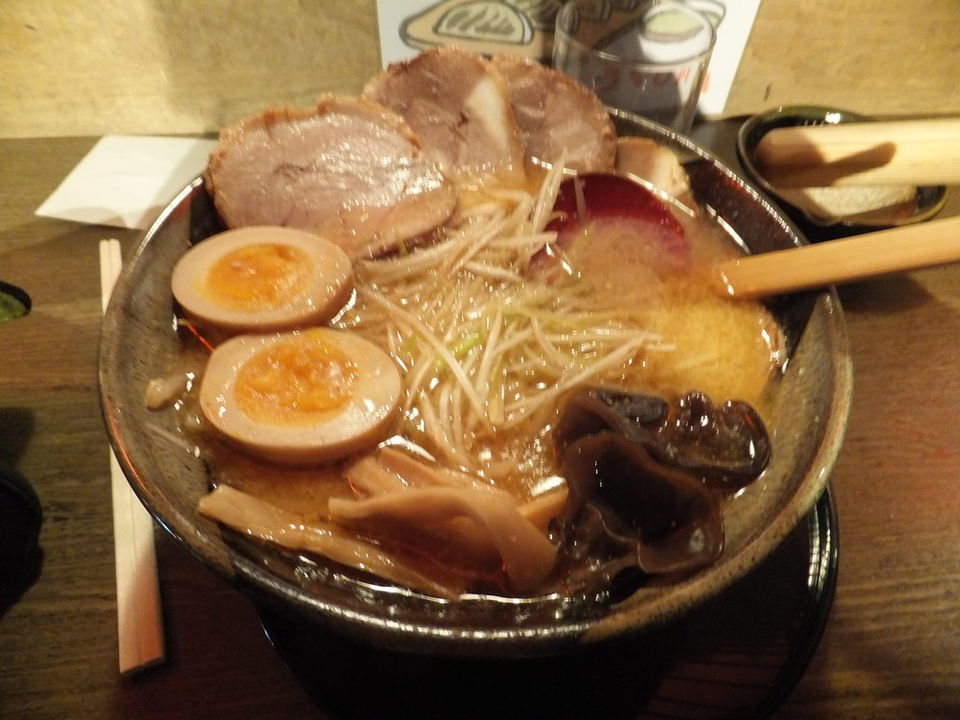 Sapporo, the capital of the mountainous island of Hokkaido is associated closely with its rich and flavourful miso ramen which was born there. The local ramen is made even more appetising by sautéing soybean paste with ginger and garlic which in turn is mixed with a hearty pork broth.

Topped with roasted pork, sweetcorn, bamboo shoots and bean sprouts, a hot bowl of miso ramen will warm you up inside on the coldest days of Hokkaido’s frosty winters. Some bowls are even topped with a whole meaty crab. The ramen is a raging hit amidst locals and there are two ramen alleys, Ganso Ramen Yokocho and Shin Ramen Yokocho which cater to people’s ramen pangs.

Isono Kazuo is an unassuming ramen-ya with only 6 seats at the counter. The broth served by the restaurant is dark but the flavours are rich and luscious. The noodles used in the broth are yakisoba (fried noodles) for that crisp and the chashu (pork) is unseasoned, allowing it to soak in the beautiful flavours of the broth. Top that with shrimp powder or grated ginger and you'll be licking that bowl clean.

Lighter on the stomach and the palate is the Kitakata ramen with a gentle, shoyu based soup and fat and curly egg noodles. A lot of ramen-ya places use dried sardines and pork broth. The bowls are served piping hot with chashu pork, menma (bamboo shoots), onions and the visually striking naruto, a fish cake with a spiral of pink on white which sits pretty amidst the splendour.

Makoto Shokudo have earned their name because of their luscious rich soup with that beautiful fat serenely floating on the broth. It's surprisingly not too greasy and the fat imparts the broth with a full-bodied taste. The best part though is the lucky prize you can get if there's 'Atari' (win) written at the bottom of the bowl.

Tonkutsu ramen and Hakata (now Fukuoka) ramen are synonymous. The broth is creamy and white made from boiling pork bones until they release collagen. Thin noodles are cooked al dente and topped with chunky slices of roasted pork, sesame seeds, garlic and pickled ginger. You can ask for noodle refills as second helpings called kaedama which are free of cost. This kind of ramen is commonly served by mobile yatai stalls as well as in many proper ramen shops.

This restaurant is run by a pair of brothers and all the produce used in the ramen is fresh. The pork used in their exquisite ramen is from local farms, their soy sauce is from Fukuoka and spring onions from Itoshima. Their broth is made with the utmost care, slow cooked for hours for that right balance between meat and fat. Their ramen is so good that locals have nicknamed it the ‘pork bone capuccino’.

Onomichi in Hiroshima is a seaside town and uses fresh seafood in their ramen, Their shoyu based broth contains chicken bone and dried sardine stock. Their noodles are firm and flat and are embellished by green onions, char siu and menma but the best part of the dish is its succulent layer of pork fat floating on top, suffusing the dish with delicious flavour.

The Shukaen is a ramen-ya shop with perpetually huge queues outside. There are no pretensions here. Those seated are meant to finish their meal and leave to let others in the queue have their turn. Their onomichi has pebbles of fat floating around which melt in your mouth.

Unlike the afore mentioned broths, Takayama ramen’s broth is flavoured by chicken bones, bonito flakes and vegetables. Though in other ramens, the broth is dissolved with the steaming soup, the Takayama ramen boils the base and soup together to form a dark broth with a tinge of sweetness. The steaming bowls topped with onions, char siu, menma and naruto fish cakes are a sight to behold.

Masago Ramen is Takayama ramen's birthplace and the oldest shop in the vicinity. If you're expecting creaking wood and vintage mats, you'll be struck by how new and comfortable the ambience is inside. In true ramen tradition, the noodles here are hand-made and the broth strongly flavoured, bordering on bitter. A slice of chashu pork is placed on top along with green onions and bamboo shoots. What better way to sample the Takayama ramen than in the shop where it was invented?

Take a walk through the neon-lit streets of Japan. We hope that the wafting smell of ramen from a random ramen shop may lure you in to sit down with locals and dig into a bowl of ramen along with a glass of giddy sake.

Got a flair for writing and a penchant for travel? Write your stories here!

Tried any of the above types of ramen? Tell us in the comments below!