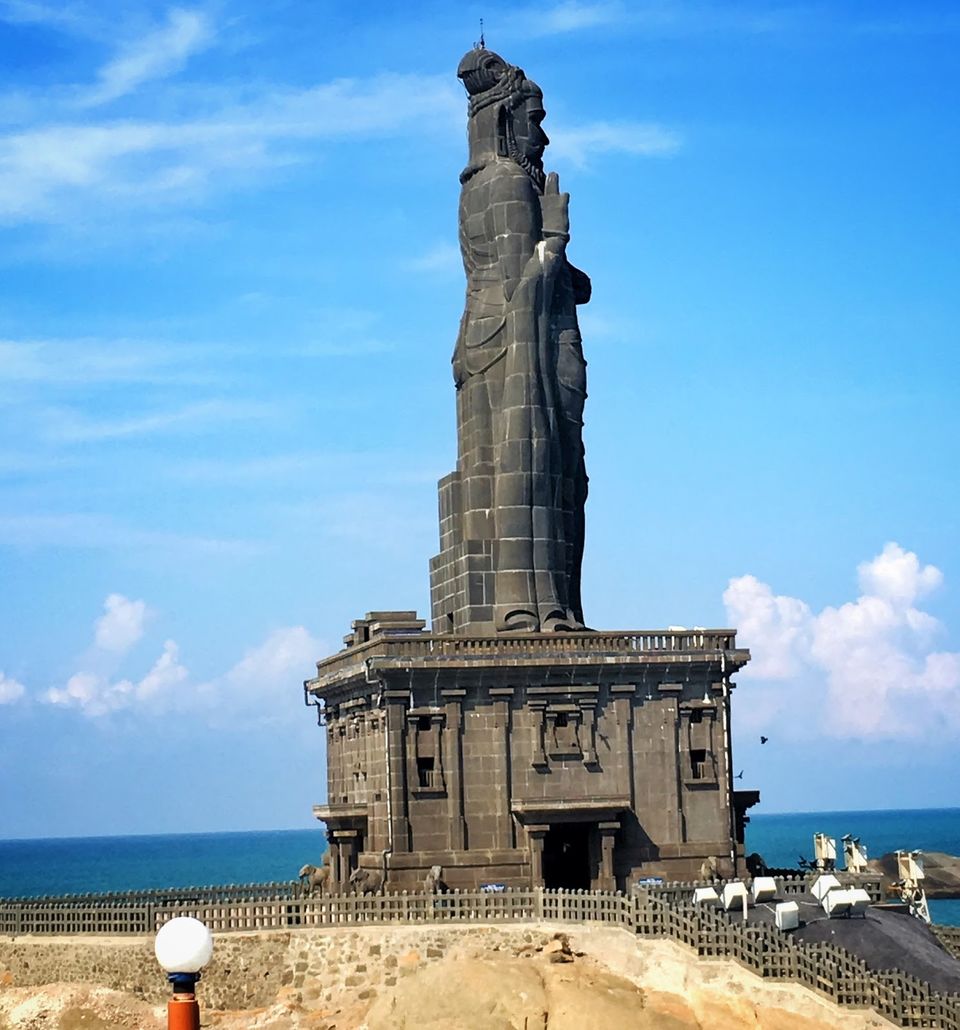 Kanyakumari, the end point of mainland India, the southernmost tip of the peninsula, the place where the Arabian Sea, Indian Ocean and the Bay of Bengal unite. If you are an Indian who loves to travel, visiting Kanyakumari is definitely in your bucket list. After visiting Kashmir twice, the northernmost part of India which, I believe, is also one of the most beautiful places in the whole world, I really wanted to visit Kanyakumari some day. And finally the wait was over.

By the time we reached Kanyakumari from Trivandrum it was already 5 in the afternoon. We quickly checked into our hotel and freshened up. If you are in Kanyakumari you should never miss the sunrise and the sunset. Luckily the time for sunset was 6.15 so we had time to witness it. We headed towards the view point which was at a walking distance from our hotel. On my way up the tower, I noticed a group of people meditating on the rocky beach while watching the sunset. Just by watching them, I had a calm feeling within me. I so wanted to join them but they were quite far away. Since we were in a hurry and it was kind of late by the time we reached the topmost part of the tower, we couldn't enjoy the sunset to the fullest. So I was eagerly waiting for the next day to watch it again taking my time, peacefully sitting somewhere.

We strolled around the city by the beach, enjoyed some tea from a small stall before we headed back to the hotel to treat ourself with a delicious South Indian dinner. I totally love the variety of side dishes they come up with in their thalis.

The next morning, we got up early to watch the sunrise and thankfully we were on time. The one thing I noticed is people here are very excited about watching the sunrise and the sunset. The view point watch tower is pretty crowded and there are a bunch of school students everywhere. We saw the sun rise from the ocean on the side of the Vivekananda Rock and Thiruvalluvar statue. There were pilgrims who came to watch the sunrise as well. And I noticed most of the people joining their hands and bowing their head down in prayer to take blessing from the rising sun. I did the same.

After our breakfast, we walked to the port to catch a ferry to the Vivekanda Rock. Well it takes you to the Thiruvalluvar Statue as well but unfortunately it was under construction so we could only go to the Vivekananda Rock. It was a long wait in the queue before we finally got a chance to get onto the ferry. It took 5-10 mins to reach. You need to take off your shoes at the counter. I was kind of reluctant and started questioning if it's worth it in such scorching heat of the sun. But I was wrong. We first entered the Sripada Mandapam which is a shrine erected at the spot where the footprint of the Virgin Goddess Kanyakumari was found. We then entered the Vivekananda Mandapam which is a memorial hall dedicated to Swami Vivekananda. Attached to it, was the meditation hall where you can actually sit and meditate. The ambience was just beautiful and perfect for meditation. I sat there for a while trying to meditate. I felt so great just by realising that this is the place where Swami Vivekananda attained enlightenment.

The heat was too much to bear and I was not feeling well so we decided to leave for the hotel right after we docked at the port.

In the afternoon, we went to the Kanyakumari temple. There is a dress code here as well but not very complicated. Only men have to open their shirts and women should be covered and of course shoes to be taken off before entering. Luckily, the time we entered the temple it was not crowded at all. So we had a very peaceful darshan. One speciality of the idol is her diamond nose ring. The sparkling ring is so bright that it can be seen from the sea and once a mariner mistook it for a lighthouse. I felt so blessed to visit another Shakti Peetha.

So, that's all from my stay at Kanyakumari..