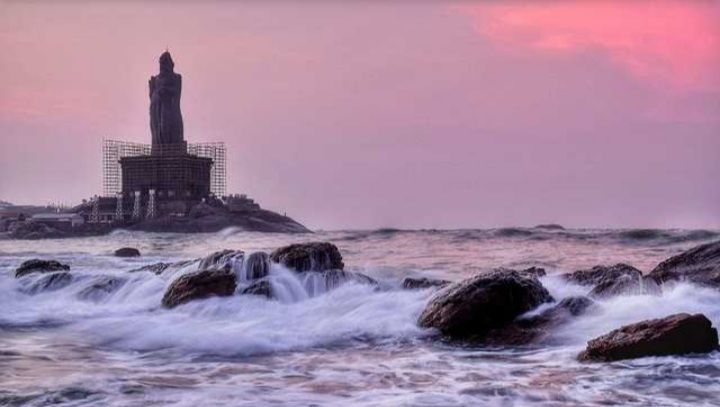 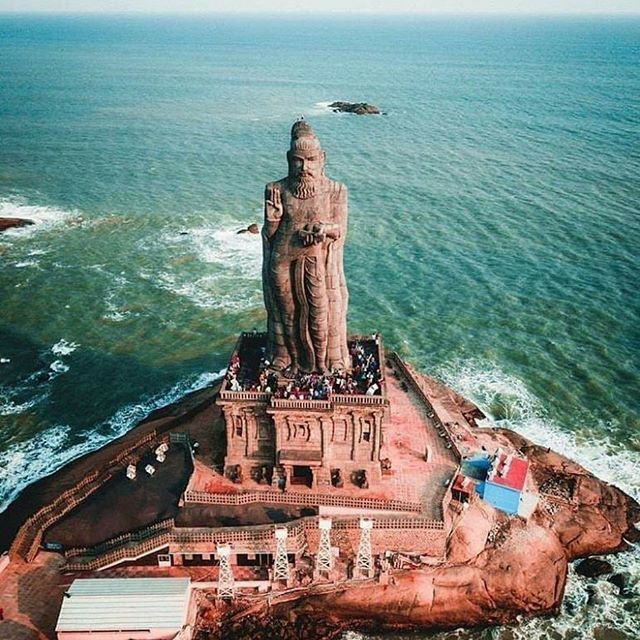 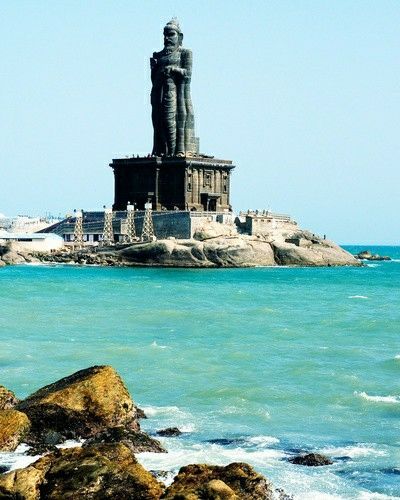 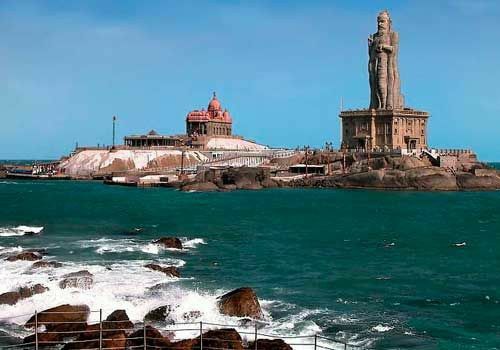 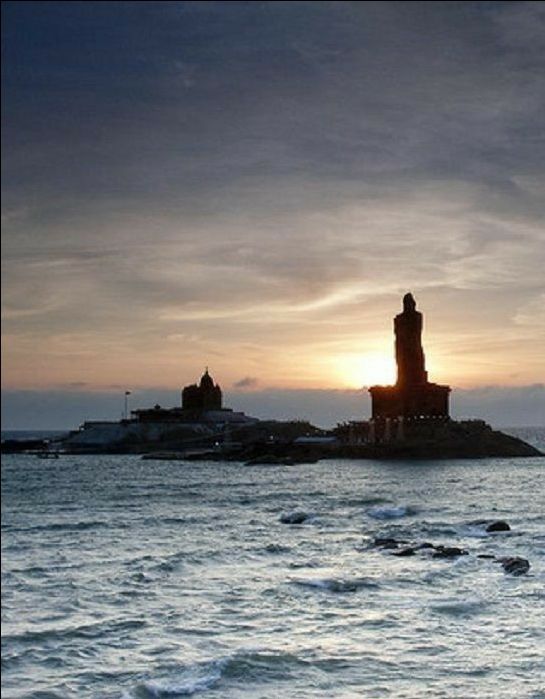 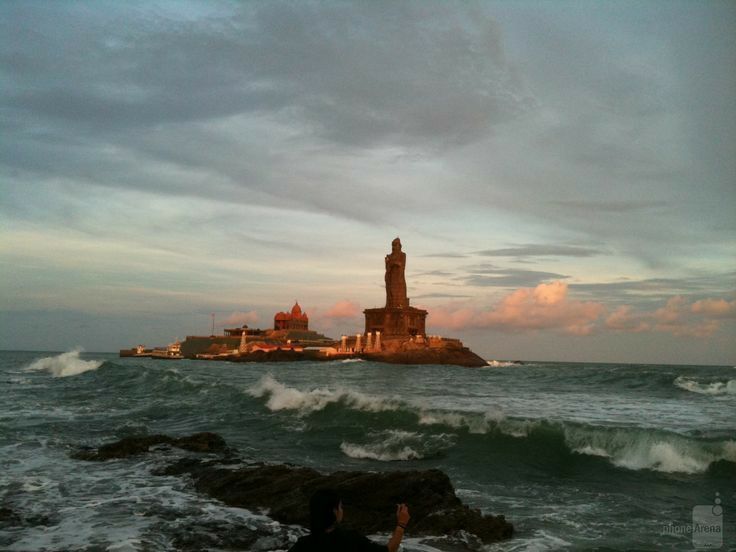 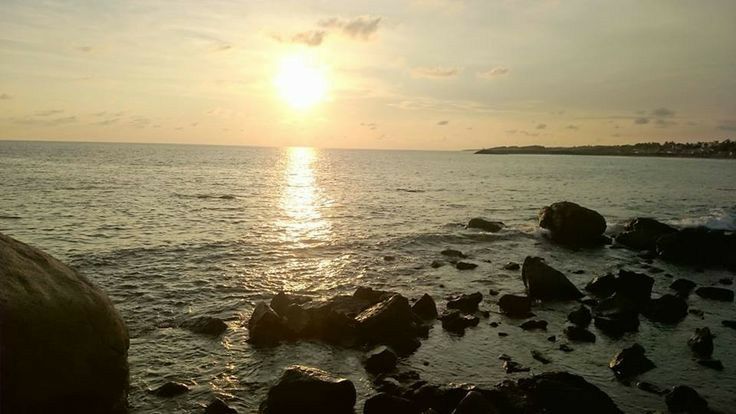 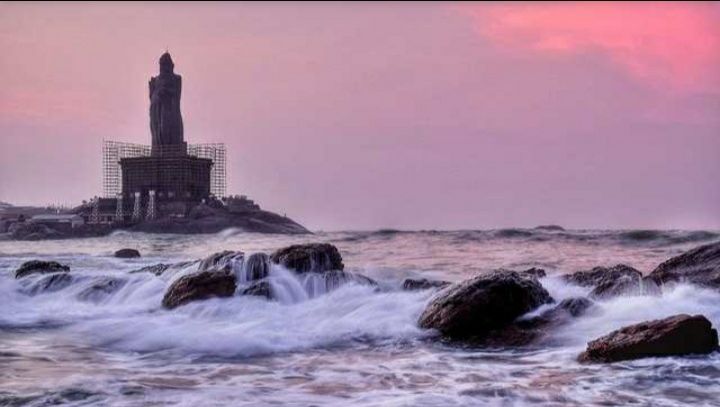 Located in the southernmost part of India, Kanyakumari beach with its beautiful hue-changing beaches, the confluence of three water bodies: Bay of Bengal, Indian Ocean, and the Arabian Sea.

Miraculously, here you can see that the water of three seas does not mix, you can distinguish between the turquoise blue, deep blue, and sea green waters of the three seas, though the colors keep changing with the season and the day's weather.

The beach is not conducive to swim or surf as the water as the sea is rough and the beach is rocky.

To enjoy the best view, you can visit the Triveni Sangam point and climb up the famous lighthouse watchtower to entirely take in its beauty.

There is a lighthouse at the beach which will provide you with the most fantastic view of the vast expanses of salty water stretching till the horizon.

A temple for Devi Kanyakumari, corresponding to the legend of the coastal city and its beach, has been built dedicated to the young and fiery goddess.

The deity is smaller than any usual South Indian idol, but its diamond nose ring is said to be so bright and radiant that distant ships often mistake it for a lighthouse's beam of light.

Gandhi Mandapam is a memorial built for the place where Mahatma Gandhi's ashes were kept before a portion of it was immersed in the sea.

The building is built in such a way that on the day of Gandhi Jayanti (2nd October), the sun's rays fall directly on the urn where the ashes were kept.

One should not miss this tribute to the great man at the tip of the land of whom he is the Father.

A rock formation cut off from the mainland, around 500 meters away in the Indian Ocean is famous as the place where the great saint Swami Vivekananda set his foot in 1892 after traveling the entirety of the country on foot.

The Vivekanand Rock Memorial is also famous as the place where Devi Kanyakumari had actually practiced her penance for Lord Shiva standing on one foot.

It is dedicated to the great Tamil poet, philosopher, and saint Thiruvalluvar.

The statue is around 133 feet in height which signifies the 133 chapters in the epic piece of writing by the poet Thirukkural.

The statue stands on the Vivekananda Rock. Tourists can go up to the top of the statue and enjoy a breathtaking view of the surroundings, especially during sunset.

Tourists can easily spend some time shopping in the small shacks and stalls scattered around the beach selling various souvenirs and handicraft items.

You will find decorative items, jewelry, wall hangings, and showpieces made of seashells, conches and seafoam.

Bamboo, cane, and wood products are also available here and there.

Palm leaf drawings are the unique collector's item of the Kanyakumari beach that you can buy from the souvenir shops.

One can also enjoy some of the festivals and fairs that are celebrated on a significant scale here – Vaisakha, Kalabham, and Navaratri are some. Another exciting thing to do nearby will be the exciting water sports.

If you are not the adventurous type, you can just take a trek down the golden beach to spend an afternoon.

#How To Reach Kanyakumari Beach

Buses and auto-rickshaws are available to take you to the beach from any part of the main city.

While the buses have fixed rates, autos ask for an amount like INR 500 to take you around.

If language is a barrier to use public transport, you can always hire a car from an agency or from the hotel you are staying in.