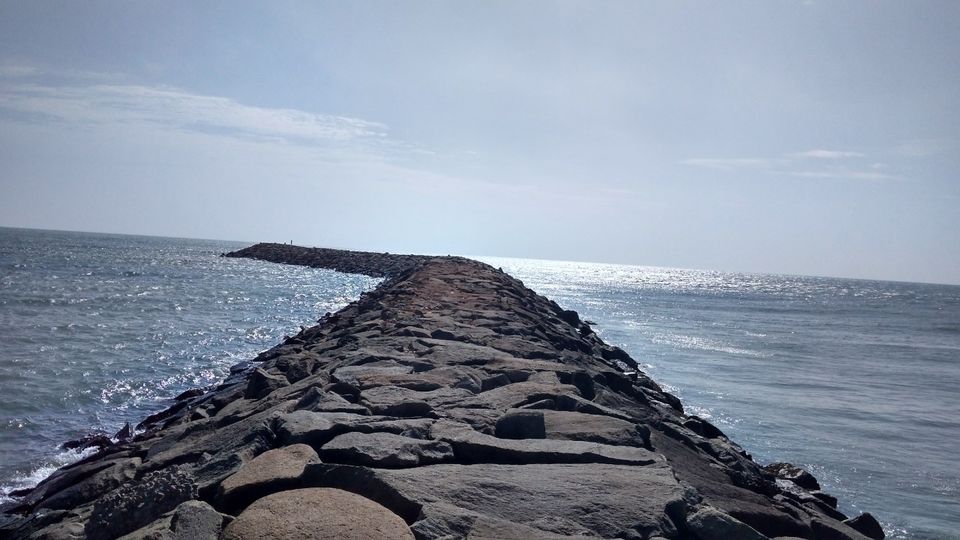 “The purpose of life, after all, is to live it, to taste experience to the utmost, to reach out eagerly and without fear for newer and richer experience.”

After a lot of waiting and eagerly hearing the announcements of trains, I heard about my train and went to platform no. 4 to get the train. As soon as the train came I got into my seat and kept my phone on charging and called it a day as I would be in kanyakumari early in the morning. After disturbed sleep, I woke up at around 5 in the morning. Phone was charged so was I after the sleep I had in the train. Reached kanyakumari station by 5:30 am. Kanyakumari is a coastal town in the state of Tamil Nadu which is also known as India's southern most tip. Jutting into the Laccadive Sea, the town was known as Cape Comorin during british rule and is popular for sunrise and sunset over the ocean and many other places to visit and enjoy the trip.

I set my foot out of the train and the morning light was just about lighting up the sky and the land. It was a bit chilly but I could already feel the humidity in the air. As I made my way out to main exit of railway station and for the first time in my life I have seen train track ending abruptly right there. That was it. The longest rail road came to an end with the barricade and the stone wall cutting off the journey with only one way to go and that's the way back to where the train had come from. It was something new and unique I have seen in my life. After getting fresh and having a cup of tea I started to walk out from the railway station heading straight to the beach side. The walk was through the empty roads and dark streets with thoughts of would there be people around or will I be allowed or not. But to my surprise there were a lot of people scattered all across the beach. Some sitting on the walls and some walking around looking at the dark shore and hearing the sounds of the waves rushing towards them. 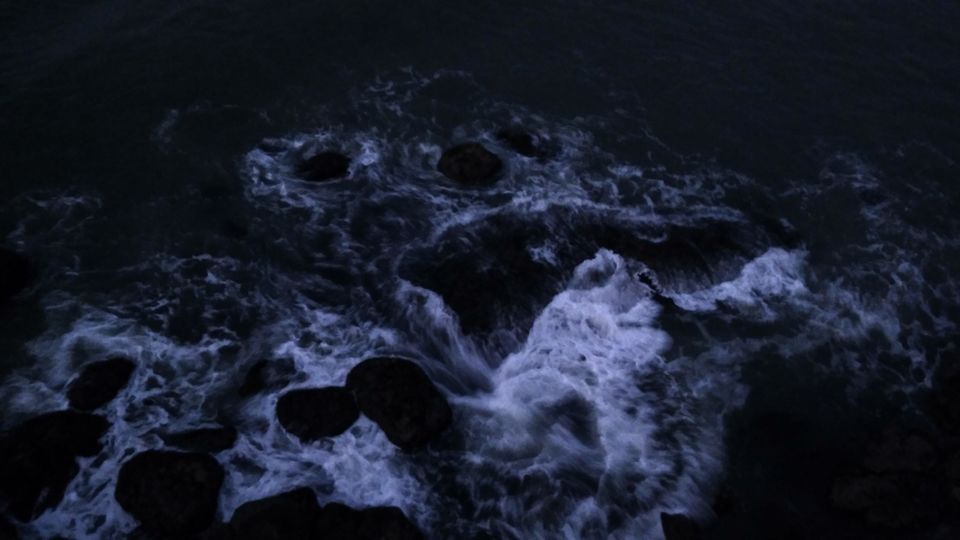 I sat by the walls on the shore and enjoyed the darkness filled with relieving sounds of waves. As it was time for sunrise I walked on to find a suitable place and after walking for some time I found a watch tower and to my surprise it was open. I hurriedly walked there with rejoice and took an entry ticket and climbed stairs to the top floor. There were few people already waiting for the sunrise. The view of the ocean and the waves cruising onto the shore from the tower was breathtakingly beautiful. As the sun started to rise the landscape changed from black and white to colourful shades of orange sun and blue waters. The statue of Thiruvallur, a tamil poet stood tall in the midst of the ocean besides Swami Vivekananda memorial. The sun eventually came out with all it's beauty for the waiting people to be awed by it.

Sun risiing from the horizon 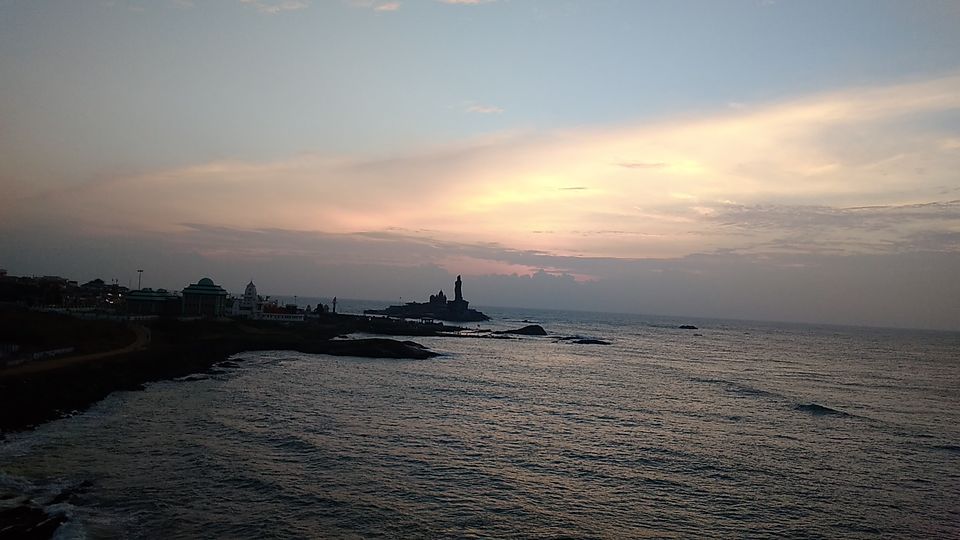 Shades of thiruvallur statue in the ocean 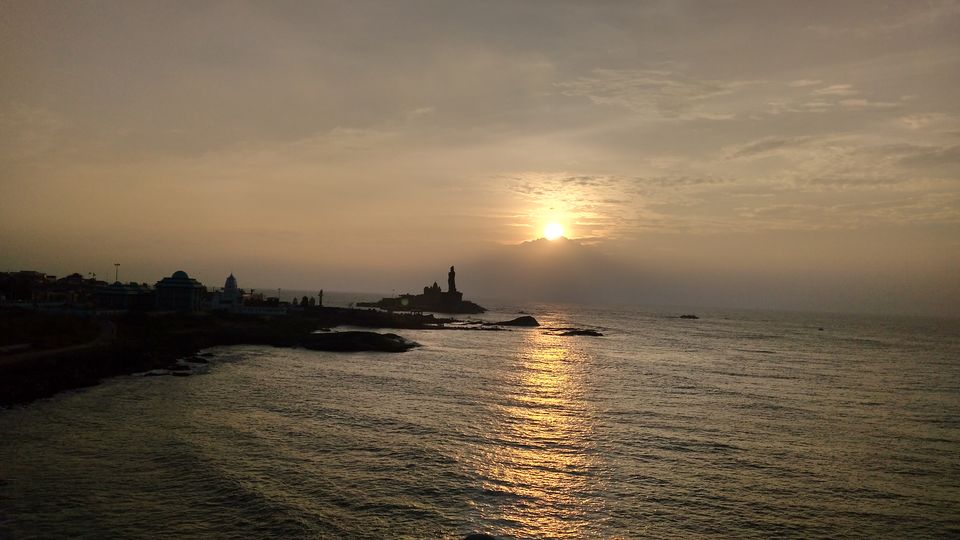 Waves cruising onto the rocks 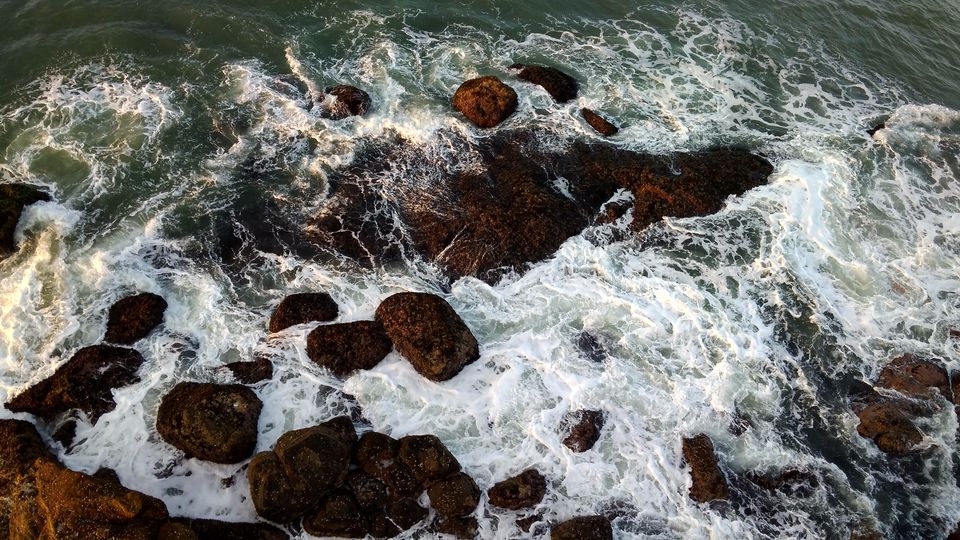 The views were colourful and the perfect start to the day. I walked through the narrow streets now filling with people as the day was progressing ahead. I freshened up and changed my clothes after taking bath at a pay and use service for bathing propose. Went on to have my breakfast at the nearby hotel and enjoyed the tasty masala dosa. Then I was set to start my voyage of this small laid-back town of Kanyakumari. I went on to visit Gandhi mandapam which is a memorial displaying the life journey of mahatma gandhi. A Pink memorial building with sea views on site where Gandhi's ashes were held after his death. Just near to the mandapam was the sangam spot which is considered sacred as it is an intersection of the Ganges & Yamuna rivers. When something is considered as holy and sacred in India, and if it is near to a water body then you are bound to find cloth pieces and other objects scattered all across the place without any idea of polluting the place. I stood along the road and looked at the sight and decided to not go there and went ahead to the Sarvani Shaktipeeth Shri Bhagavathy Temple which was near to the main beach. 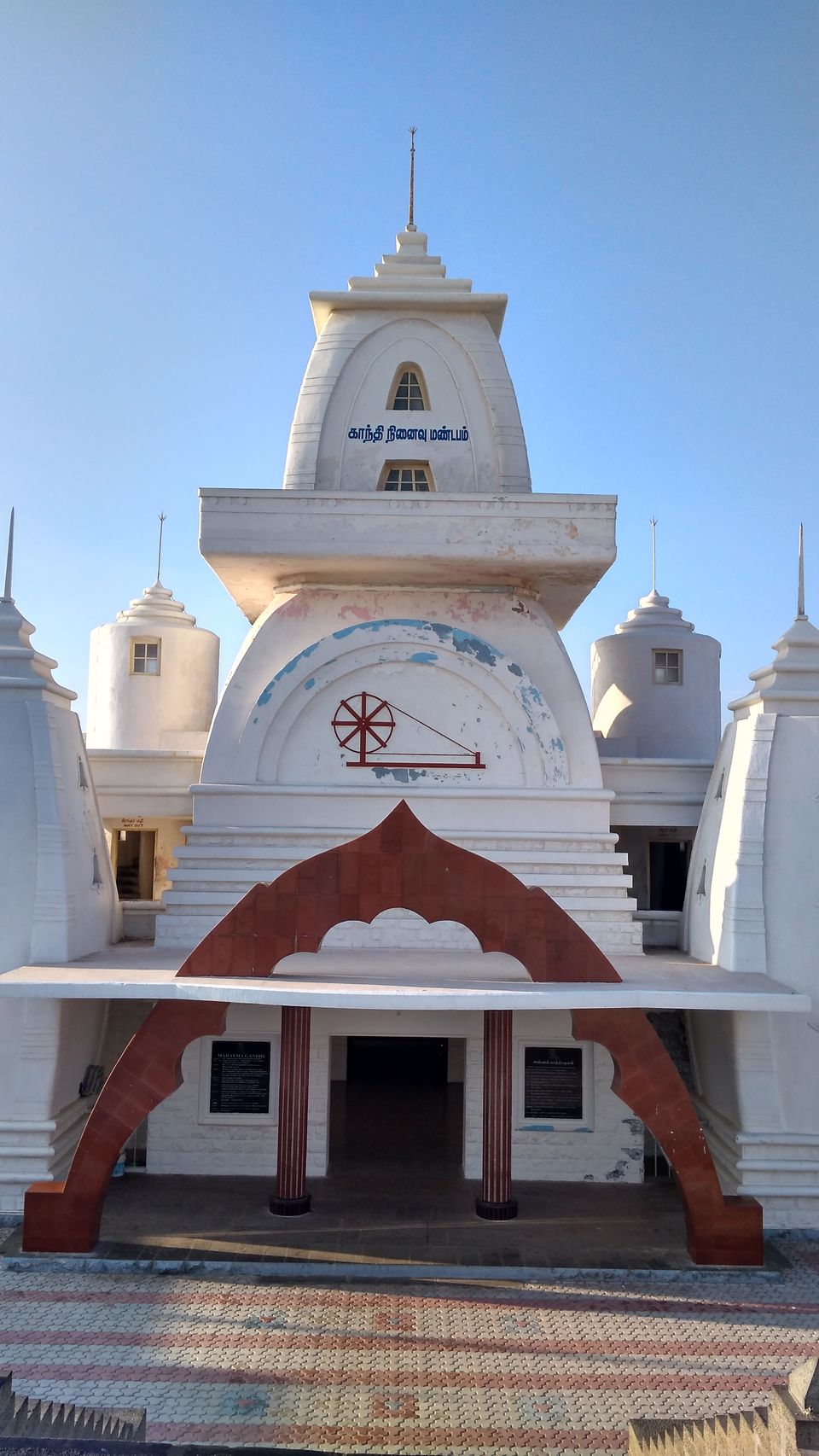 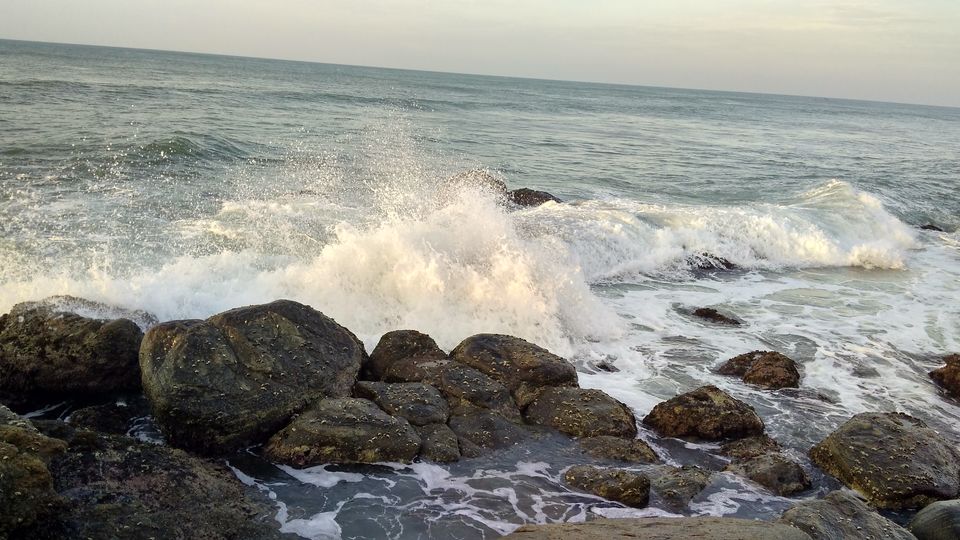 After a short wait in the line and taking the blessings of the goddess, I made my way out through the street vendors and shops selling artefacts and other items. I walked along the vavaturai beach which is used by local fishermen. I could see fishermen coming back after fresh catch and other boats making their way for the hunt. Not the cleanest of the beaches but a unique atmosphere compared to other places nearby. You get to see glimpses of vivekananda memorial and Thiruvalluvar statue from the beach. I walked past and wandered around to come across fisherman's colony with their square shaped houses stacked beside each other and them working on their entangled nets. Just after passing through the community, I came across the walkway which is called kanyakumari pier where big stones are placed on each other above the sea. It's like we are literally flying above the sea with strong wind blowing from everywhere. The pier extends into the sea for some distance and so it provides a clear view of the horizon. Walking to the edge and sitting down at the end point, you can feel water splashing on the face. You just don't feel like going back from this place. 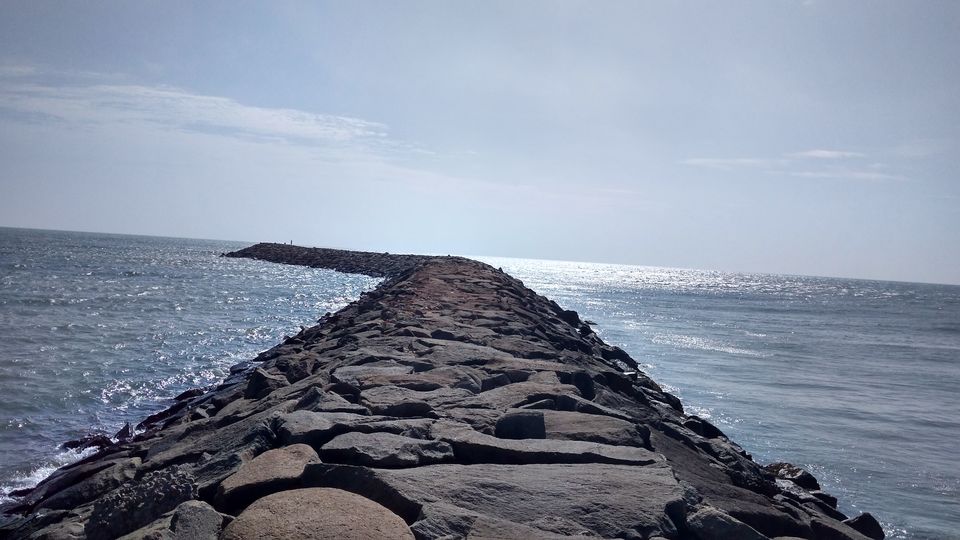 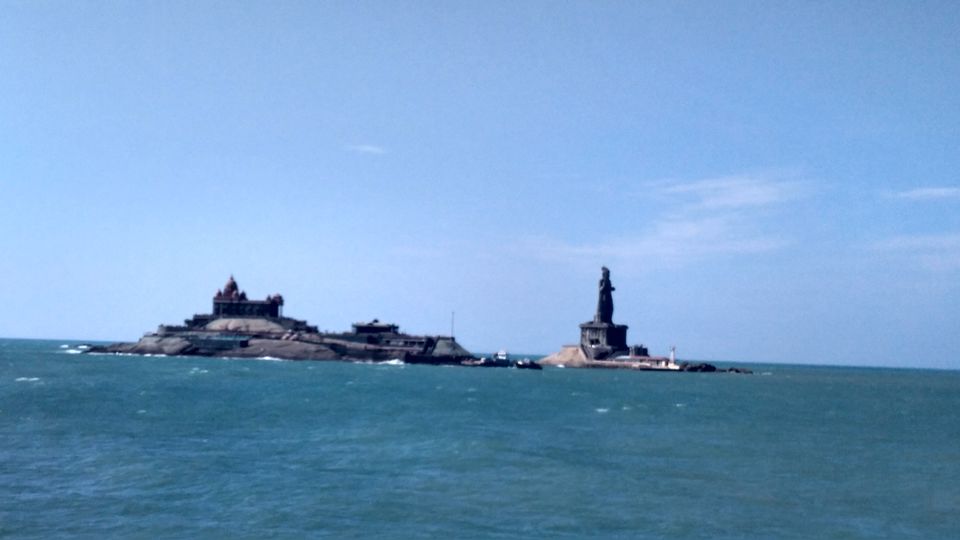 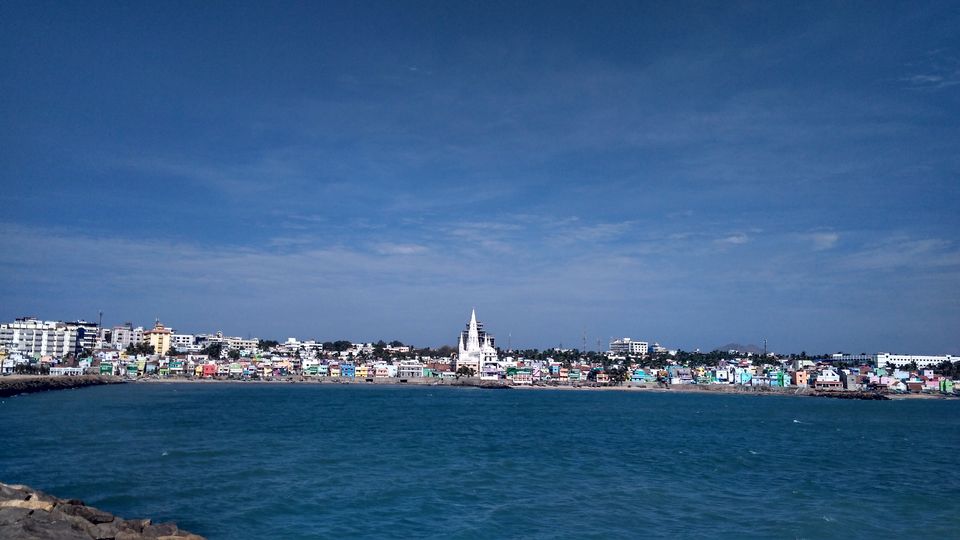 I made my way back to the Vivekananda Dock boarding point to take a ferry ride to reach vivekananda memorial. After everyone is secured with life jacket and a seat, the journey starts which is about 15-20 minutes and the boat starts shaking with quick movements adding to the thrill. As we get closer to the memorial, you can see how big the size of the Thiruvalluvar statue is and how beautifully memorial is constructed on a single rock. Whether you are a tourist or you are trying to get some peace and solace, this is a place to visit at least once in your lifetime, if not again and again. The Memorial is a serene windy place where the life and times of Swami Vivekananda are depicted. Swami Vivekananda is supposed to have swum up to this place in 1892 and meditated for 3 days. A nice meditation centre, books to browse and buy and a large corridor to walk around. Walking around the memorial with the view of infinite blue waters and wind blowing is a nice experience. This is the southern most point of India you can reach. After an hour of calmness and a beautiful experience, I made my way back to the main land by ferry. 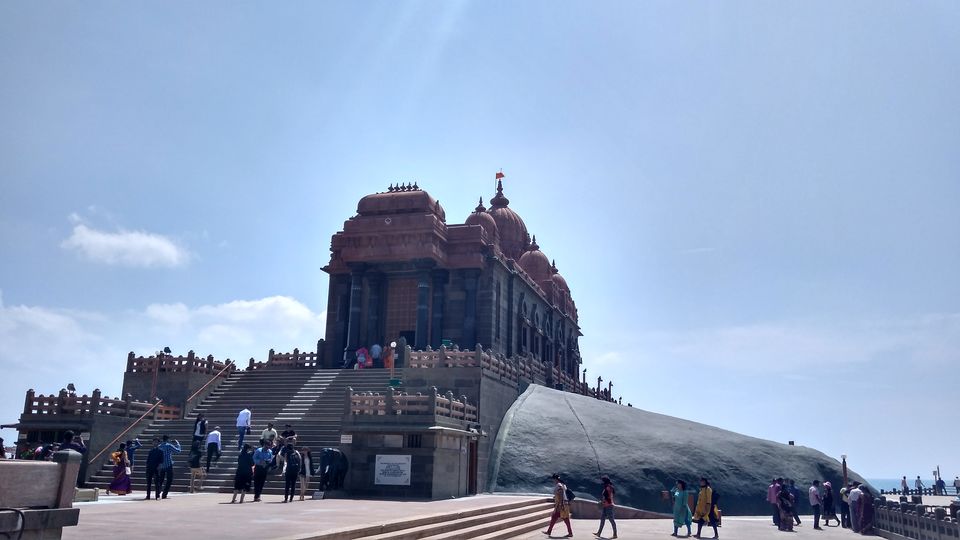 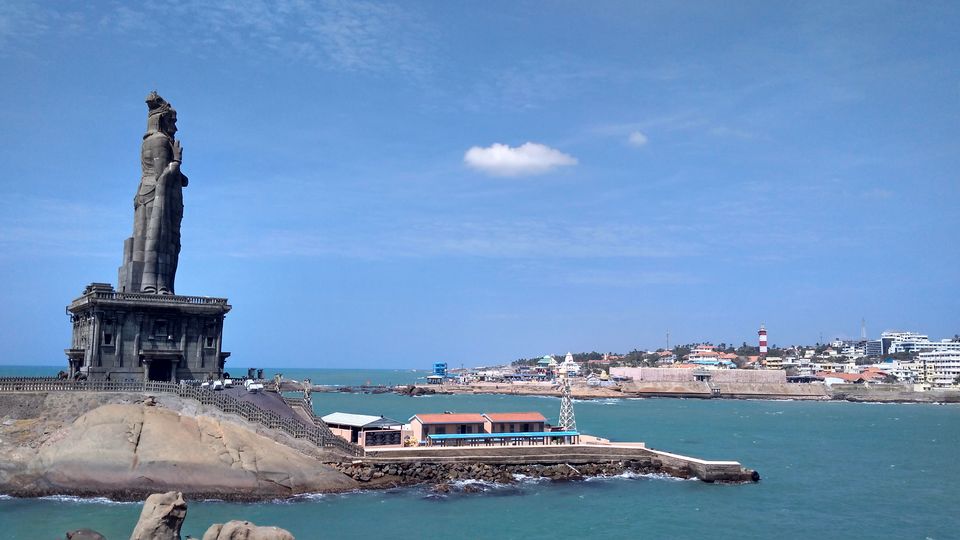 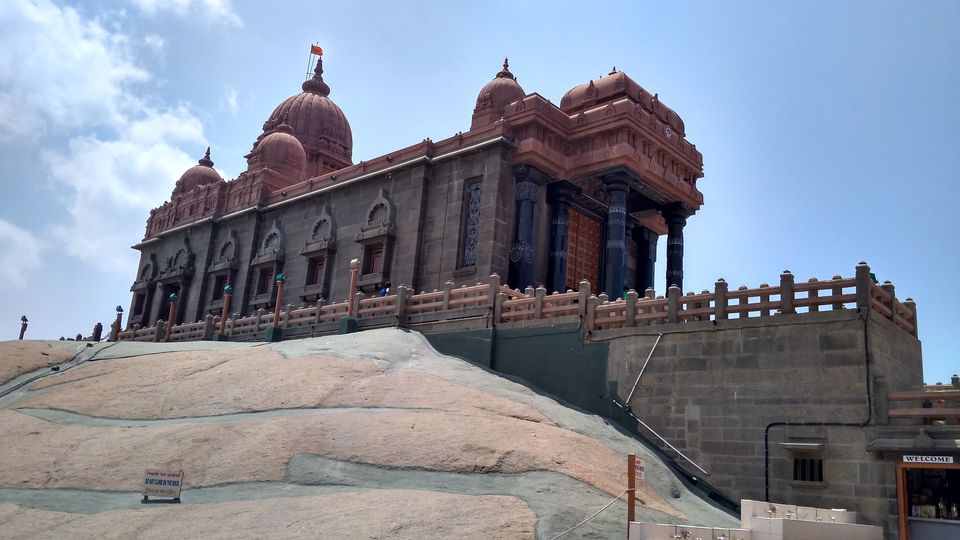 Our Lady of Ransom Church

I walked crossing narrow streets to reach Our Lady of Ransom Church which is situated close to the beach and stands at the height of 153 meters. It was constructed in Gothic style and looks incredible because of its pearl-white colour. The church has 12 towers, each representing the 12 disciples of Lord Jesus. There are numerous stories and legends about the history of the shrine. The most noteworthy story is of the iron mast that floated in the sea and the amazing story about how it was erected in the courtyard of the church. Time flew by very quickly and soon it was time for lunch. I had lunch at Afsal hotel near to railway station which was a small place with simple seating arrangement. I ordered chicken biryani and a fish fry which turned out to be beyond my expectations. The local style Chicken biryani was unique yet tasty and fresh fish was well fried and spiced to good extent. 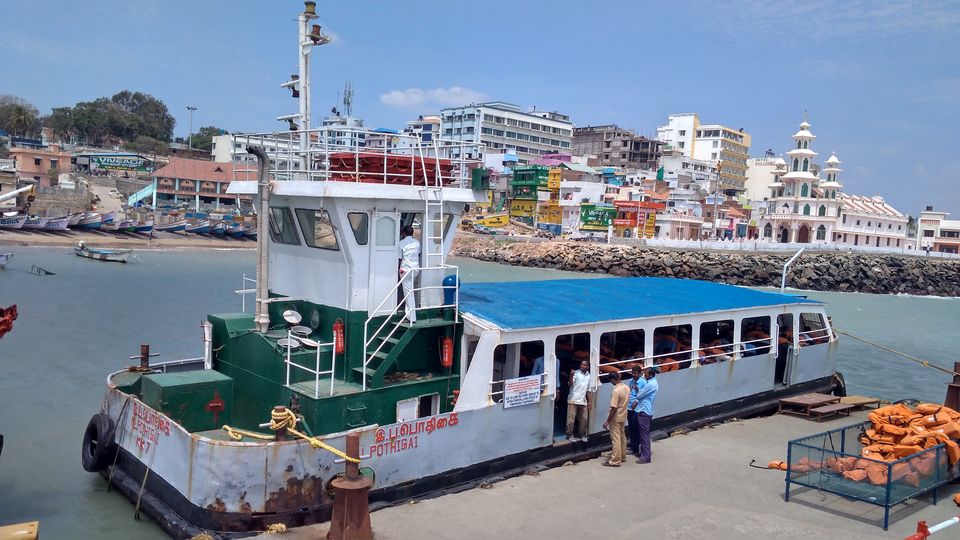 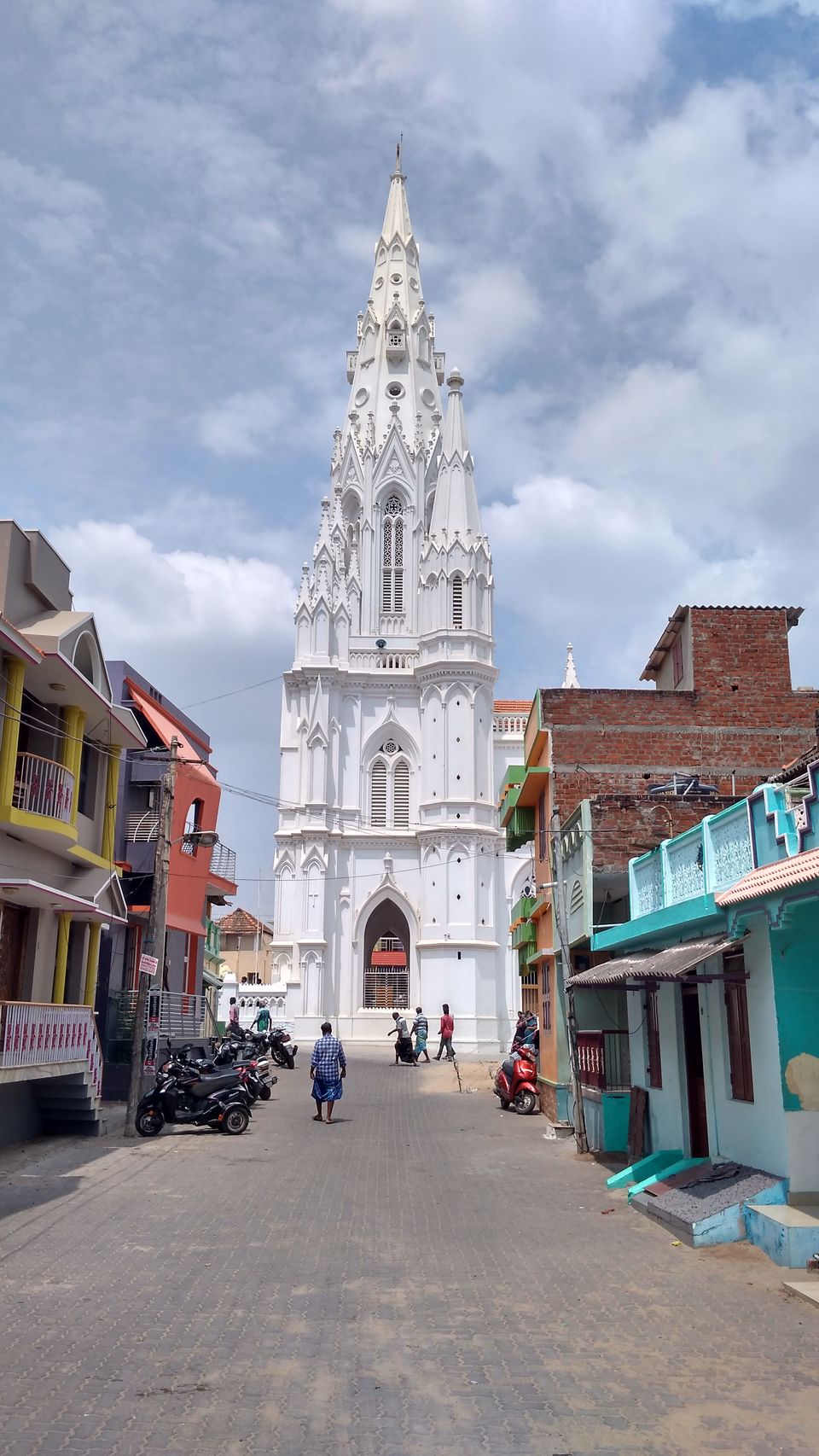 After filling up my tummy and getting the much needed energy back, it was time to get back to explore other side of kanyakumari. I went on my way to Vivekanandapuram which had Vivekananda Pictorial Exhibition which is a great place to know about the evolution & gradual spiritual development in the life of Vivekananda and Gramodaya Park which is a well maintained theme park with depictions of Ramayana and Mahabharata with paintings and stories in English, Hindi and Tamil. Walking along the trails in the laid back and calm place, I found a statue of swami Vivekananda which is erected inside the Vivekananda Kendra as a Mandapam and the place is serene and peaceful with birds and peacocks roaming freely around. The main source for wandering this side was to visit this secret sunrise beach which is secluded from all other beaches and not so far from the city. Maybe the fact that I was there in the evening was the reason for the place was secluded but being there all alone hearing the sounds of the ocean was mesmerising and a great experience. 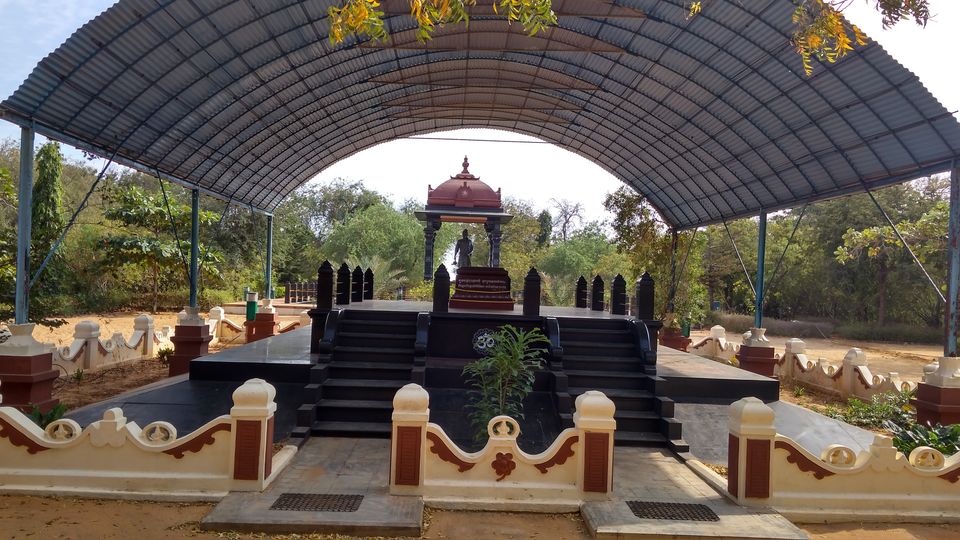 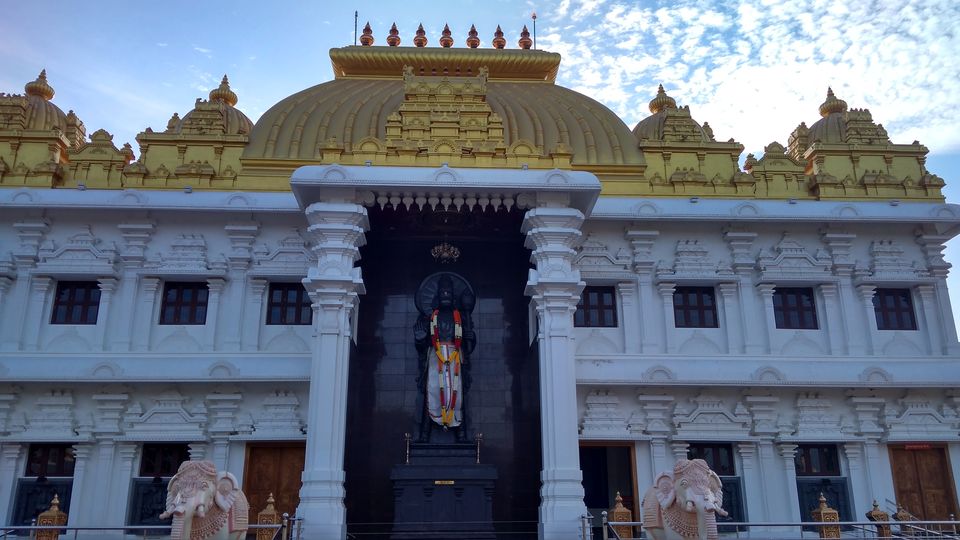 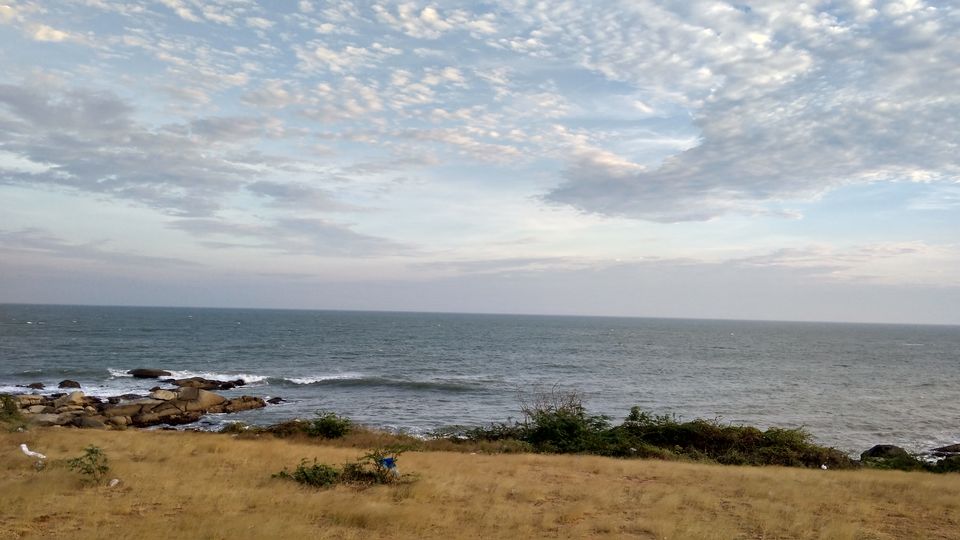 Soon it was evening and I had heard about this sunset point which was a bit far from main beach but had awesome views, I decided to get there in time and took a local bus till kanyakumari beach and then an auto to the sunset point. Kanyakumari Sunset View point was a bit far but the first sight of the beach with the view and the crowd was joyful. People scattered everywhere in groups along the beach waiting for sunset. Some sitting on the rocks with their friends and others playing in the sand with their kids and families. I walked along the beach looking for a spot where I could get a better view and so I crossed some rocks and went ahead of the crowd to sit with other people. I could spot some foreigners in the Indian crowd and some solo travellers sitting in solitude looking far ahead into the ocean buried in their solitude. As the time went by the sun started setting and the view got better and better with patterned clouds in the sky and the sun dipping into the ocean. This has to be the best place in Kanyakumari to enjoy the beautiful sunset if you are lucky with clouds not interrupting the view. As the dusk was gradually turning into dark and the people going back to their stays, I decided to walk along the trails of the beach till the main beach as the weather now was cool and windy. As I approached the main beach, I could see the lights glowing from the Vivekananda memorial in the midst of the dark ocean. 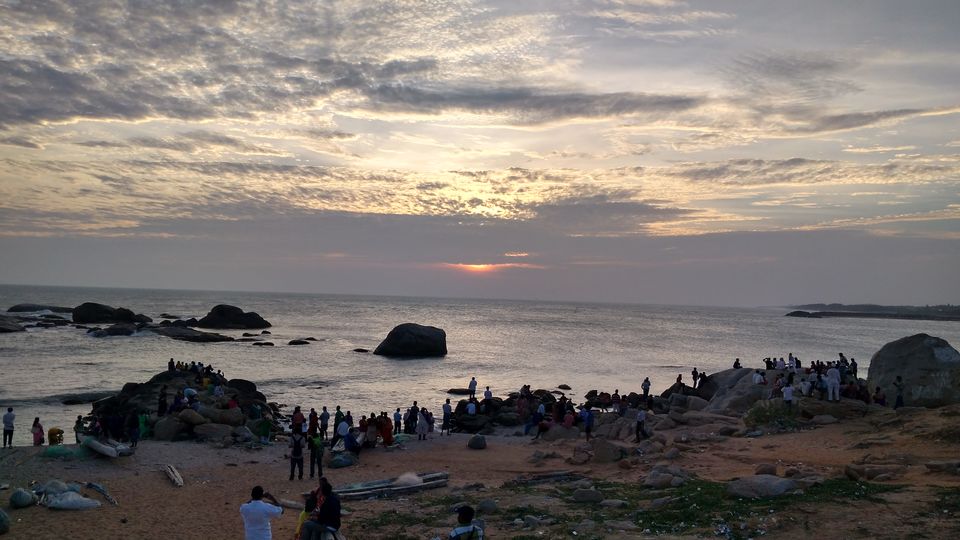 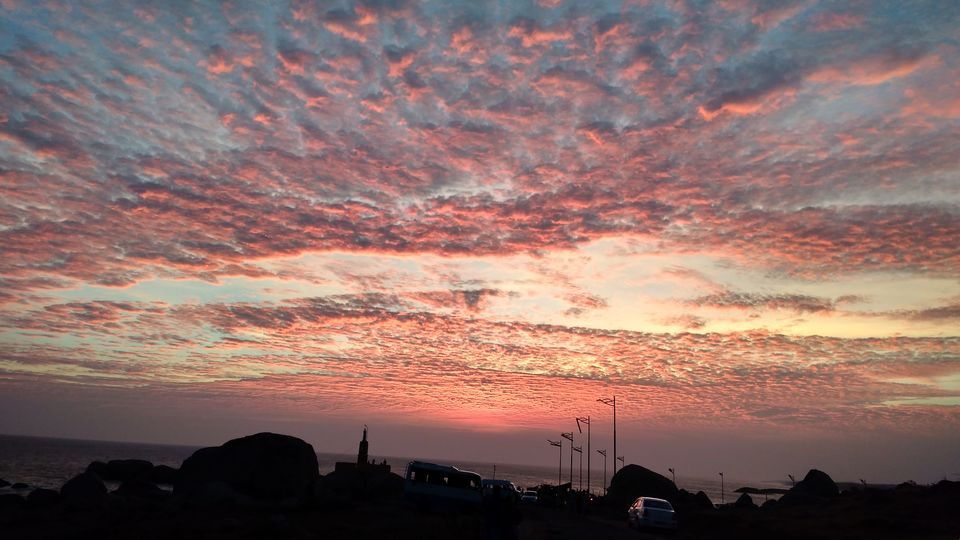 I had my dinner while walking back to the railway station in a small restaurant and reached station a bit early to charge my mobile phone and sitting on the bench after a long day with all the walking and sightseeing looking at the unknown faces and passing trains. With this one day excursion and wandering, I can say kanyakumari is one of the best places to visit in India. I waited for my train to rameswaram which arrived somewhere around 10:30 pm and went on to have a good sleep looking forward to my next day adventure.