Pushpagiri (Kumara Parvatha), at 1,712 metres (5,617 ft), is the highest peak in Pushpagiri Wildlife Sanctuary in the Western Ghats of Karnataka.

From the railway station (KSRTC bus service is available even early in the morning) we boarded a bus which was waiting outside. It was a 20-minute bus journey and at around 4 am we reached Subrahmanya town, near the temple. We freshened-up and packed our backpacks with water bottles, lunch box, some chocolates, glucose, and other essential things. Our plan was to keep our travel bag in the cloakroom near the temple and to start the trek at around 5.30 am. But the cloakroom remained closed till 6 am, and so we had to find someplace to keep our luggage safe. While searching for a room nearby the temple, we come across a person, and he politely offered a room for safekeeping at 600 Rs. We were forced to accept it because it was around 5 am already and searching for cheaper rooms was not an option, if we wanted to start our trek at 5.30 am. Finally, we kept our luggage in the room, filled water in the bottles and walked towards the starting point, Adi Subrahmanya Temple. The road from Kukke Subrahmanya temple to Adi Subrahmanya temple is motorable and most of the people who come for trekking, park their vehicle on the parking ground near Adi Subrahmanya temple.

5.30 am reached near the temple and headed towards the small green gate, entry to the trek. It was all dark at 5.30 am in the morning, we had to trek through leech forest for almost 5-6km, till our next stop point. Our plan was to reach Bhatru Mane, have breakfast, refill water bottles and continue the trek. And we already booked breakfast at Bhatru Mane and informed that we would be reaching by around 7.30 am. The forest was completely dark, and we light-up the torches and started walking slowly. The silence of the forest and the surrounding darkness pushed me into a little bit of panic and I was walking behind the other two with Umesh leading the group. Somewhere near the trek trail, we heard a waterfall, which was a little far from the trek trail. Since it was dark and early in the morning, and we hadn’t planned to visit the spot.

And the moment we spotted an elephant dung on the trek trail, we started moving carefully for the next couple of minutes while maintaining complete silence. The trek through leech forest was so tiring and, at some point in time I felt completely exhausted. But it was better to move uphill, rather than stay idle inside the forest in the dark, so had some water and continued the trek. The weather was a bit foggy, but I was sweating, and finally, we decided to take a break, and sat on a rock on the trail, took rest for some time, had water and started again. The jungle got rid of the darkness after some time, and we continued our trek slowly and took small breaks in between.

After long trek through the leech forest, we reached an open forest covered with shrubs, bushes, and grass where the terrain became less steep and we continued at a normal pace and I felt a bit relaxed.

At Bhatru Mane, we had expected to have our breakfast at 7.30am, since we had informed a few days back, but the food was not ready. And he asked us to wait for another half-an-hour to prepare the breakfast and we have no choice other than waiting. After half-an-hour, more hikers reached Bhatru Mane, my friends started chitchats with them in Kannada, and I was trying to figure out what they are discussing. I was successfully able to understand most of it. Breakfast preparation took almost one hour and we finished breakfast, refilled water bottles and packed our lunch, and left Bhatru Mane. At 9.10 am we reached Forest Check post, where we had to enter personal details with valid ID card and pay 350 per head as the entry fee. After completing the procedure at the forest office, we started our next phase of trekking. We paused near the viewpoint to take some photos before continuing our trek.

The trekking progressed through a different type of terrain, an open hill covered with a green carpet of grass, bushy terrain, loose gravel paths, and steeper rock covered paths. The next stop point according to our itinerary was Kalmandapam (Kallina Mantapa), and just 100 meters before reaching the Kalmandapam we stopped near a stream to refill our water bottles. Around 10.30am, we reached Kalmandapam and paused for a snack break and took rest for 15 minutes. Two hikers, whom we met near Bhatre Mane was also there and we had a small talk with them for some time. We refilled our energy and enthusiasm, started the next stage of the trek around 10.45am.

The trek trail from Kalmandapam was steeper than the previous, and weather was not so comfortable as it was hot and sunny. And at some point, we took a wrong route, only to realize it after some time. And we took another off-trail path, climbing steeper rocky path and finally got back into the actual trail. At around 12 pm, we reached the Sheshaparvatha Peak and look a long rest.

Sheshaparvatha Peak was simply an amazing place, scenic beauty of the surrounded hills and the thick forest around hills. Sun in his supreme form, but the always flowing breeze was a great relief for us. The Pushpagiri Peak was visible form Sheshaparvatha, and a flag was flying on the peak.

View of trek trail from Sheshaparvatha

The next phase, the trek to the peak, as through the woods. The terrain was all covered with trees and flowers. I got surprised and amazed when we spotted Neelakurinji (Strobilanthes kunthianus) flowers on the way. The Neelakurinji, purplish blue flowers blossoms once in 12 years and when they blossom, it turns entire place into a magical bluish carpet. The entire trek trail was unlike before, the climate was awesome, green everywhere and as me moving closer to the peak the trail becomes steeper and steeper.

Clicks from the trek trail

1.00 pm we reached the highest point of our trek, the Pushpagiri Peak. We spend half an hour on the peak and met a few other trek gangs and hikers. And finished our lunch, which we packed from Bhatre Mane. 1.30 pm we started descending the peak.

The Team : Me, Sunil and Umesh @ Pushpagiri Peak

The descending phase was tougher, because for slippery rocky and steep trek trail. It almost took one hour to reach Sheshaparvatha peak again (around 2.30 pm). During the descending time, we took fewer breaks and progressed through the trail carefully but faster speed. At 4.15 pm we reached near the Forest office and reported there, and 4.30 pm again at Bhatre Mane for tea. 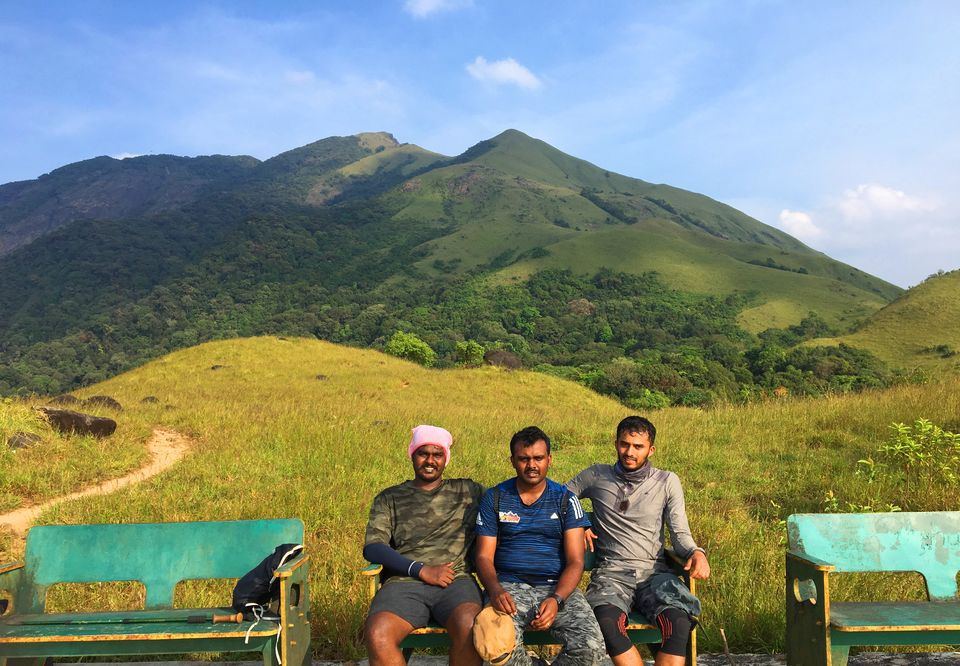 Since I was not wearing trekking shoes while descending the rocks (which were hot) and that burned the skin under my feet. At 4.45pm, we started descending from the BM to base point. From BM to the starting point we took almost one and half hour, and for the entire trail, we never had a single break. On the way down, we met with a lot of people who were ascending towards BM and Forest office for camping. They would be camping near BM and forest office, and start trekking on next day morning. 6.15 pm, we reached the place where we started, near Adi Subrahmanya temple.