The Dip of Faith #BestOfTravel 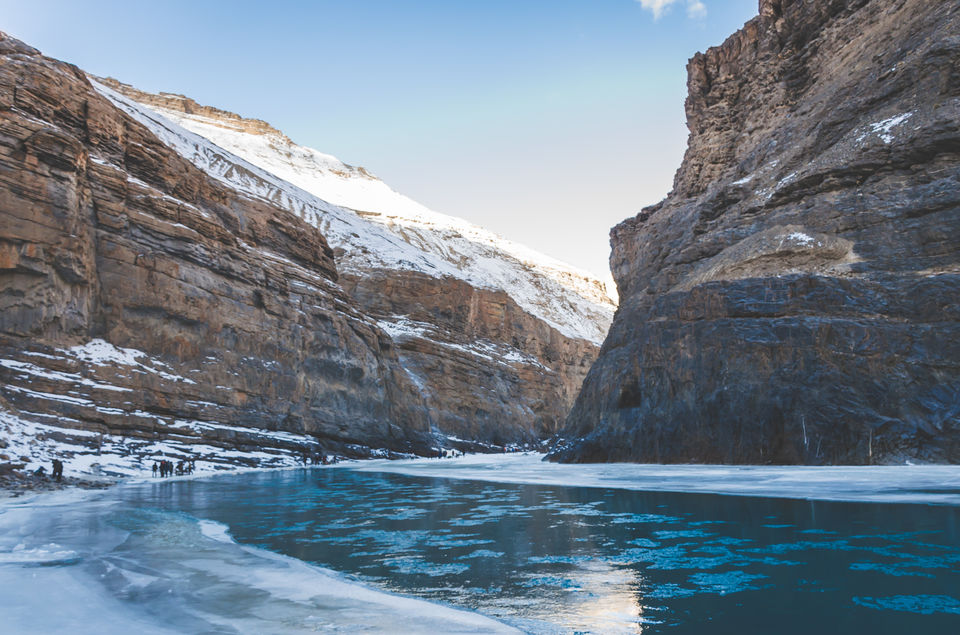 A grueling journey of 72 km on a terrain opened for less than two months round the year with temperatures ranging from – 30 degree to – 40 degree, all to be done solo. The very blue print of this map swallowed me into its charm of attempting something of what I called, The Chadar Expedition: A Step beyond.

Blanket of ice a.k.a Chadar is the name of a trek in the Zanskar valley of Ladakh region in India which is a walk on the river Zanskar frozen due to its extreme climatic conditions and temperatures.

The cold saturates the skin off its moisture until the point leaving behind frozen sweat. The pain can be felt on to the finger tips and it hurt if there is a long exposure of them out of your warm gloves to take a shot. It’s 2.00 a.m and I have arrived late into the night. Leaving my tent behind and standing on a rock which gives me a vantage point to see the frozen sheet of ice illuminate, I find my home to oblivion. It’s a late goodbye to the present that I hold and I summon my past to say Hello.

Silence has surrounded my spirit and all I can feel is serenity as it paves way for my I look around, the moon glowing up the frozen river and while

Just to provide a glimpse from my journey, I lost my gloves for two days and continued my journey until I found the humble kind being who took them from me without my permission. The second hand gum boots were the only option I could have afforded to attempt my trek on Chadar.

Yet, what is being narrated would be narrated and what is to be done would be done.

The scene of barren rocks with snow white ice sheets kissed an unfathomable length of time of dim skyline. Its starkness left me at the same time paralyzed by its straightforward simplicity and tensely mindful that recording on was our lone choice. The Chadar shines like a diamond when the sun strikes upon the Chadar, often leaving its surface to glow like radium. An absence of a filter screen like shades in front of eyes make it difficult to move on the ice as the Chadar shines like an angling mirror reflecting the sun’s rays onto your eyes.

However with such extreme natural conditions surrounding you, Chadar gives you the air to breathe.

The frozen sheets of ice of the river Zanskar has all the shades of ice one can imagine, the white ice, the blue ice surrounded by colossal rocks from both sides to the likes of Grand Canyon.

Underneath my feet, the sheet of ice is a piece of glass so clear that I can see the movement of the water on the riverbed and stones of all shapes and sizes.

There are constant spaces where the river still gushes down its path with turquoise blue water casting spells of stare for the eyes that look at it. The wind is patrolling the frozen river.

But I cannot stare longer!

Global Warming has blended its effect on Chadar and as a result one requires a fine sense of judgement to judge if there is a crack on Chadar due to its melting. Get wet and you are as good as dead. But what if you choose to get wet? What if you decide to let go your fine sense of judgement and put your faith in the lapse of nature? What would it feel to be naked of all the clothing and immersing yourself completely likes a suspended animation attached to a string of faith and hope? Sometimes, fairy tales frighten the child within you with all the fears and doubts surrounding but it is necessary for one to not only be strong but to feel strong.

I chose to go with my inner calling of tasting the turquoise blue water. I prepared myself for the dip and began to take off all my layers one by one. The cold started to grip my body and started travelling through loose holes inside. The body began to adapt to the freezing cold and blowing winds but the feet was growing numb. The adrenaline rush started to kick inside just before I was about to enter the river for the dip. I took some deep breaths and reaffirming my belief in the spiritual energies that guard me on my adventures and jumped into the river chanting: Om Namah Shivaye. Within fraction of seconds, the senses began to loose their sensing ability. The legs were able to gain a fortunate grip lasting for substantial seconds which allowed me to take three dips one after the other. The state of mind was thoughtless for an over thinker like me and I was left in a zone of nothingness. My whole body became a dead weight and I was anchored by the helping hands of the local which took some forced vigour for me to come out of the river.

Chills came freezing down my spine as I went out of the river. I could count the passing winds of time though my body which was all numb to anything and not just emotions. The cold seeped into my bones as part and parcel of my body before I could cover myself with any piece of cloth. My body could only offer Goosebumps as an array of spikes spread all across my body. The moment and everything associated with it was mine for the taking from the dip and I realized:

Sometimes all you need to take is a: