Khajuraho: An epitome of love, desire and passion :-) 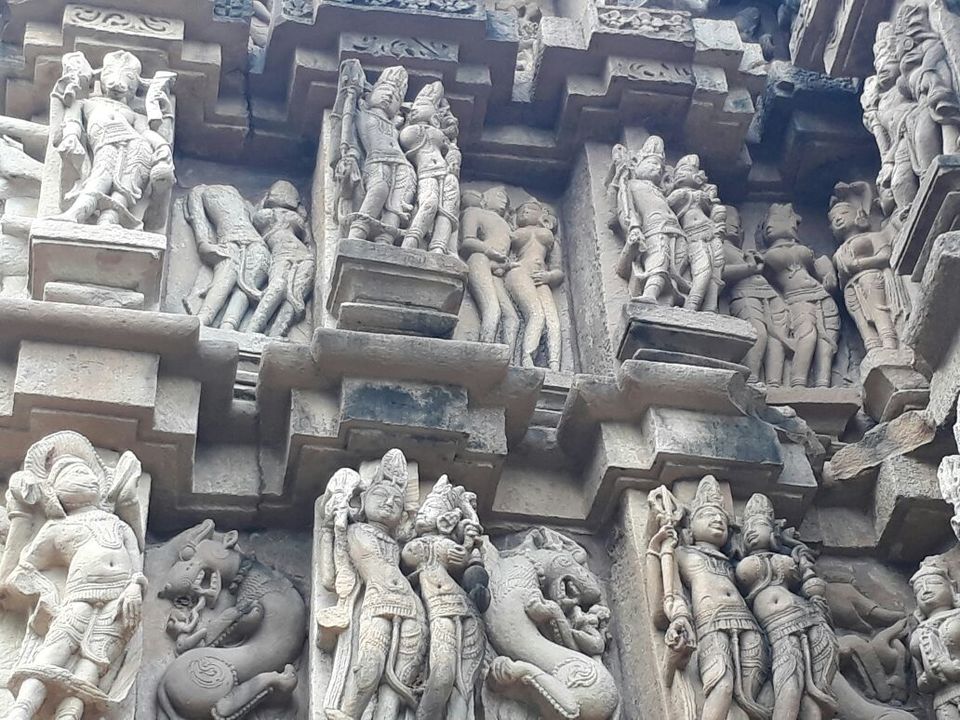 In a country where talking about sex, pleasure, sexuality, intimacy is considered as taboo, in the very heart of that country lies Khajuraho- an epitome of sensuality and desire where passion finds expression in ‘mudras’, love and intimacy are curved in stone, where architecture blossoms into the universal language of emotions.

We reached Khajuraho late in the evening, the drive from the railway station to the main city crossed calm, unreasonably silent and dark road but with an amazing company of the auto rickshaw driver who knew 11 languages including Japanese, French etc. We retired to our room at Zen Hotel which didn’t really look impressive from both outside and inside. The dinner at Jain restaurant made our evening as it tasted exactly like home cooked food.

Our first destination was Raneh falls and Ken natural trail which is located approximately 20 Km away from Khajuraho and this marks the edge of Rewa Plateau. The Ken River forms a 5 km long, and 30 m deep canyon made of pure crystalline granite in varying shades of colors ranging from pink and red to grey and a series of waterfalls in the canyon. Raneh falls is located just where the Ken National Park starts. Since we visited Raneh falls post monsoon, so we couldn’t witness the fury with which Ken river flows (though good) and because of the accidents in the past, a guide is compulsorily provided (it’s good to hear them) and it’s prohibited to go near the fall.

I was super excited to witness the architectural marvel and to be in the city which redefine and give new meaning to Indian culture. Entering into Khajuraho, I almost felt like I was entering a medieval world of apsaras and deities, mortals and devils. The Khajuraho Temples were built by the Chandella rulers between AD 900 and 1130, during the golden period of the Chandela dynasty. It is presumed that every Chandella ruler built at least one temple in his lifetime. The first recorded mention of the Khajuraho temples is in the accounts of Al-Biruni in AD 1022 and in the works of the Arab traveller Ibn Battuta in AD 1335.

Kandariya Mahadeva temple's shikara rises about 100 feet above the platform which it shares with the older Devi Jagadambi temple another important temple in the Western group of temples. Devi Jagdamba Temple is famous for the sculptures depicting mithunas in perverted positions.

The Lakshmana temple dedicated to lord Vishnu is located near the Kandariya Mahadeva temple. The entire temple complex stands on a high platform. The structure consists of all the elements of a developed temple. It has entrance porch, Mandapa, Maha-Mandapa, Antrala and Garbhagriha. Unlike other temples in Khajuraho, its sanctum is Pancha-ratha on plan. Its shikhara is clustered with minor shikharas

Dedicated to 64 Yoginis who are the manifestations of the Mother Goddess Shakti, Chousath Yogini Temple, built in granite is one of the oldest temples in Khajuraho.

Parsvanath Temple is the largest structure among the Jain temples and is dedicated to Jain Tirthankara Parshvanatha. This temple was originally dedicated to the deity Adinath, but later an image of Parsvanath was installed and the temple assumed the new name.

Bamana & Javari temples are dedicated to Lord Vishnu. The Vamana temple enshrines Lord Vishnu’s chubby and dwarfed incarnation, Lord Vamana. Javari temple is named so after the millet crop that is grown in the surrounding fields.

Brahma temple is one of the three Hindu temples in the Eastern group of Temples in Khajuraho. Except for some sculptures of Ganga and Yamuna on the doorway Brahma temple built in granite is pretty much a plain temple.

Duladeo temple is the most popular temple in the southern group of temples in Khajuraho. It is also called as "Kunwar Math" by some historians. A temple dedicated to Shiva the entire temple is decorated with carvings of Shiva and his consort Parvati.

Some also said, that young boys during the medieval era practicing ‘brahmacharya’, in which they were required to live in hermitage until they matured and became adult men, thus these sculptures are said to have been made to prepare them for the worldly desires and learn about them.

Another interpretation says they served as a form of sex education, by rekindling passions in the ascetic minds of people, who were probably influenced by Buddhism.

One of them speaks about leaving your lust and desires behind before entering the temple – which is probably why there are no carvings of sex inside the temples. The Mithunas or the couples in love are only portrayed on the outside walls of the shrines.

I also got hold of one of the books which were being sold outside the temples, which stated that the sculptures are grouped into five broad categories. The first category is the cult images and they are built exactly as prescribed in the manual – the Shilpashastra. You can see some of them carved as the teerthankaras in the Jain museum.

The second category are the ones you see in the reliefs and niches and they usually represent attendants, the guardian deities, the gandharvas, the shiva ganas, the ashta dikpalas among others.

The third being the apsaras, also referred to as sapna sundaris. The sculptors seemed to have run riot carving these beautiful women in various activities. These graceful nymphs portray human emotions. You seem them dancing, painting, holding a parrot, caressing a baby or scratching their backs or just undressing.

And then you have scenes from day to day life. The book refers to them as “secular sculptures.” Warriors, dancers, musicians are coupled with scenes of a royal court, a teacher and a pupil, a sculptor with his students and even funeral scenes.

It needs more than 6 hours to actually witness this magnificence and amazing history that ancient rulers had left for us!

Lastly on our way back to railway station, we visited a Devi Mandir, which is located in Airport compound. There are lots of stories behind this, some say that authorities tried shifting this Temple but they failed, whoever does that suffers losses! It’s a powerful space where you get want to desire, so people donate a lot of things here. We rushed after praying in the temple, as we were getting late for the train.

There is a small yet interesting dhaba just next to the Khajuraho railway station which serves amazing roti and daal, you must not miss the food here. As I bid adieu to Khajuraho, all I wanted was that people could talk about sexuality and pleasure just as it is depicted so beautifully on the walls of Khajuraho temples :-)