Khajuraho: The Epic Written on Stones

Awesome... Mesmerising... Splendid.. One utters only these or similar words repeatedly while visiting Khajuraho. It is quite impossible to describe the carving excellence in words. One must visit to experience the art and skills of the highest quality. Manicured nails, wet hair, dripping water, putting on make-up, luscious lips, salacious eyes, big bosoms, bulging backs, knotting and un-knotting of girdles, entwine legs, alluring poses, heavy Kamarbands, bare foot with ankle bracelet, intricate jewellery and above all, the expressions and emotions on the faces and the list goes on and on...all are as good as alive. Mind blowing indeed. One cannot find another example of such an extremely brilliant class of art. Like yoga, meditation and zero, Khajuraho is another gift of India to the world. It is really wonderful to imagine the class of the sculpturers and architects who made such temples around 1000 years ago and sculptured so accurately and intricately. Even today, it would be difficult to attain that level of perfection.

Khajuraho is situated in Chhatarpur district of Madhya Pradesh in India, nestled in the lap of Vindhyanchal mountain range. The famous Panna National Park and Panna Diamond Mines are in close proximity. What makes Khajuraho, world famous, is the cluster of Hindu and Jain temples. It is one of the most visited places in India by foreign tourists. It was declared in 1986, a UNESCO World Heritage Site.

During erection of these great structures mortar is not used anywhere. Rather, mortise and tenon joint technique along with the forces of gravity, is used to bind the stones together. This very simple yet effective technique is being used for thousands of years.

After fall of Chandela dynasty, Khajuraho temples suffered major destruction and disfigurement by the barbaric Muslim invaders. Local people left the town with a hope that it's solitude would distract Muslim invaders from the temple area and in this way both temple and they would remain safe. Thus, from 13th century to 18th century, Khajuraho temples remained lost in the thick forest cover, away from popularity, till it was re-discovered by a British engineer T. S. Burt in 1838.

The entire temple site of Khajuraho is divided into three groups namely - Eastern, Western and the Southern groups. Western group of temples is the biggest and the most beautifully preserved cluster of temples. People usually start their visit by western group itself. The entry fee is charged only at this premises and that is Rs. 40/- for Indians as well as the citizens of SAARC and BIMSTEC countries. Children up to 14 years of age are exempted. Nationals of all other countries have to pay Rs. 500/- (These were the costs when we visited in October 2018. Kindly confirm it for any escalation).

My niece... she always remains excited for trips and tours.. 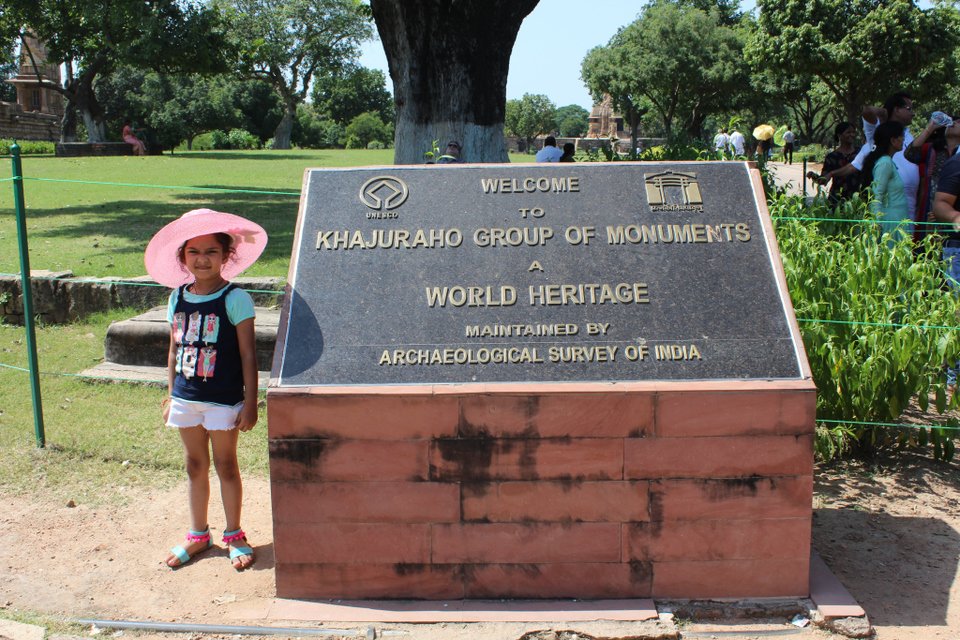 As you enter the premises through gates, there in front of you stands the largest temple among all the three groups of Khajuraho complex, the Kandariya Mahadev temple with all its grandeur. This temple is 102 ft in height from ground to Kalash (the top most point) and 66 ft wide. Plinth of the temple itself is 13 ft high. Lord Shiva is the main deity of this temple. The structure of this temple resembles of a mountain, comprising of a series of 'shikharas' of varying heights in ascending order. The word Kandariya originated from 'Kandara', which means cave. So Kandariya Mahadev means 'Lord Shiv who lives in cave' and this is somewhat reflected from the architecture of the temple. Various windows resemble like openings of the cave.

A window resembling an opening of cave 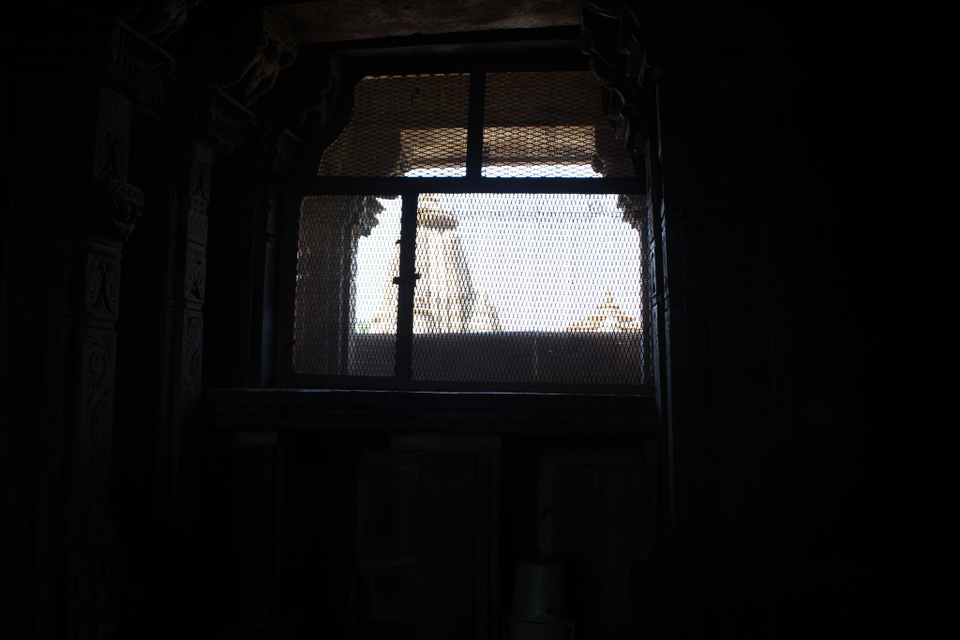 The carving brings life to stones.. 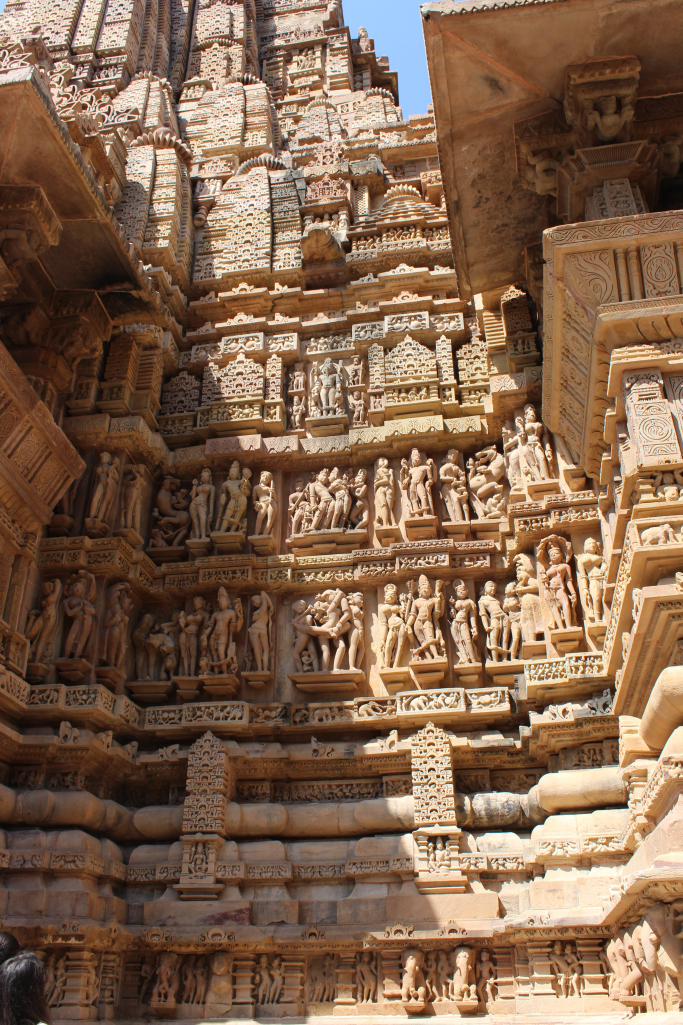 Sculptures inside the temple. 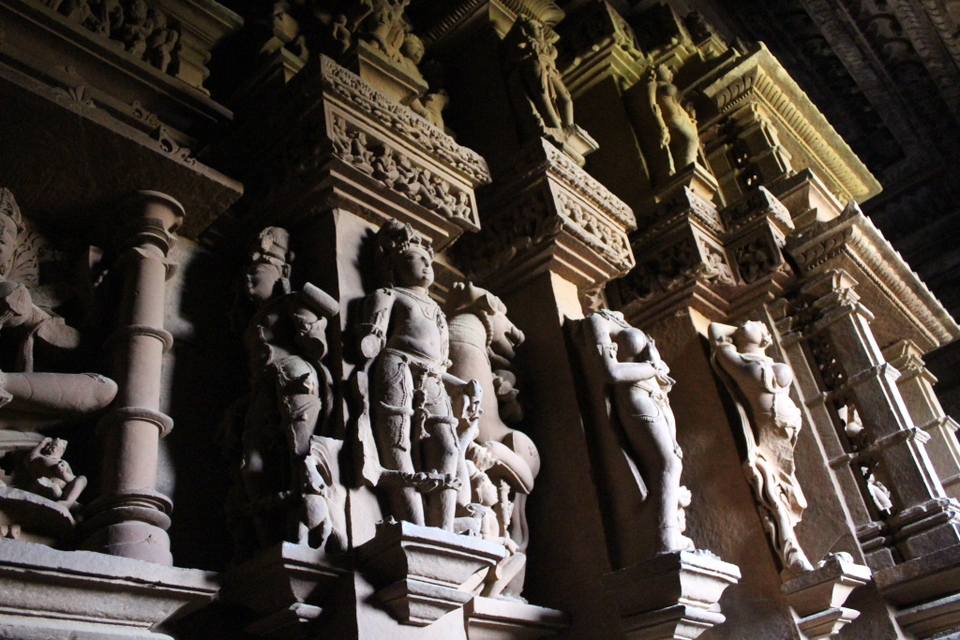 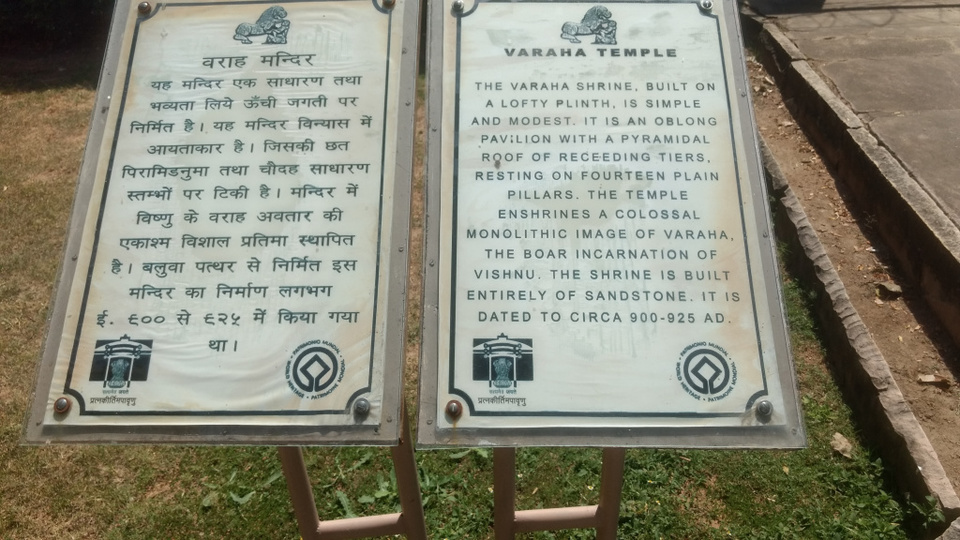 Statue of the boar, depicting the Varah Incarnation of Lord Vishnu 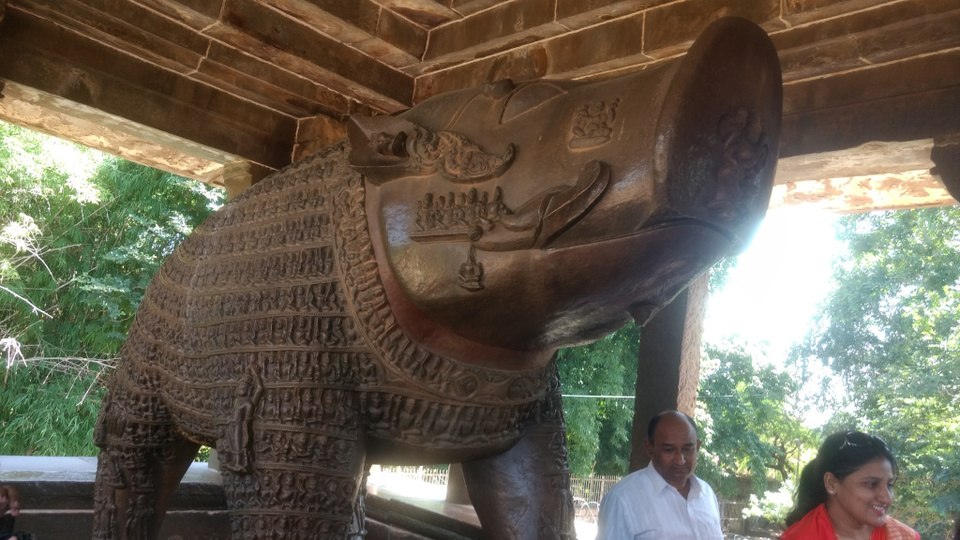 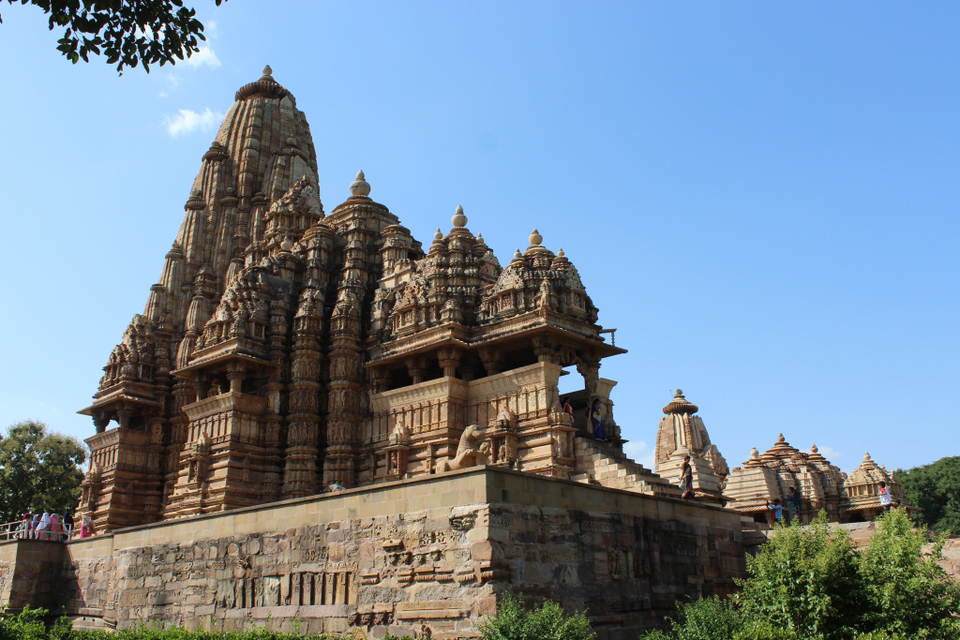 The Chausath Yogini temple is out of the main premises of the western group of temples. It is a collection of sixty four small temples/shrine rooms, arranged around a rectangular courtyard, although almost ruined now. It is the oldest surviving temple in Khajuraho dated back to 885 AD. In construction of this temple, granite is also used, which is not commonly used in other temples.

Chausath Yogini temple, the oldest one. 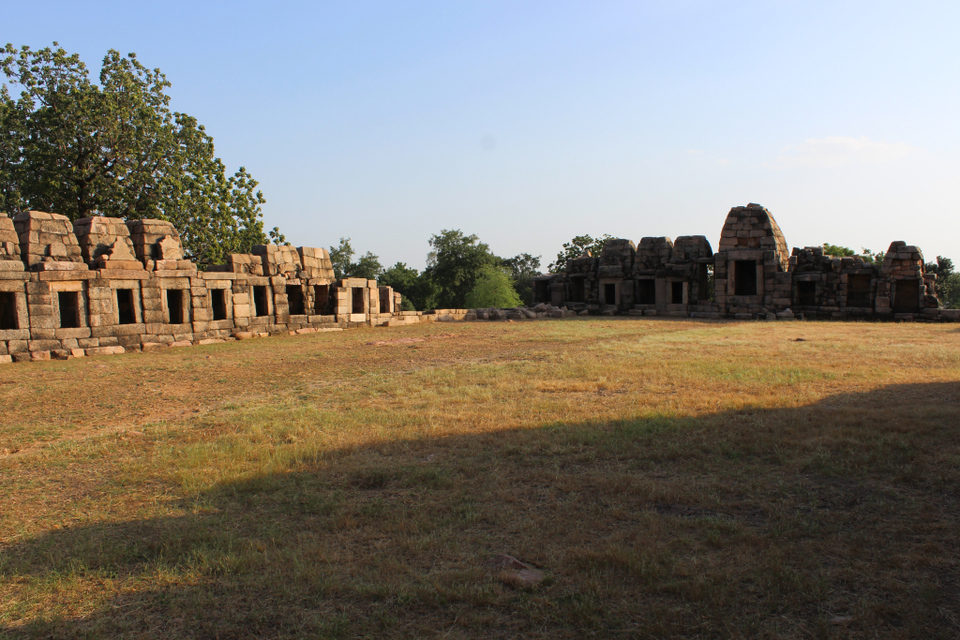 One more temple out of the main premises of the western group of temples but adjacent to the Kandariya Mahadeva temple is the Matangeshwara Mahadeva temple. This is the only temple in Khajuraho which remains open till 9 in the evening and where worshipping with all usual rituals is permitted. 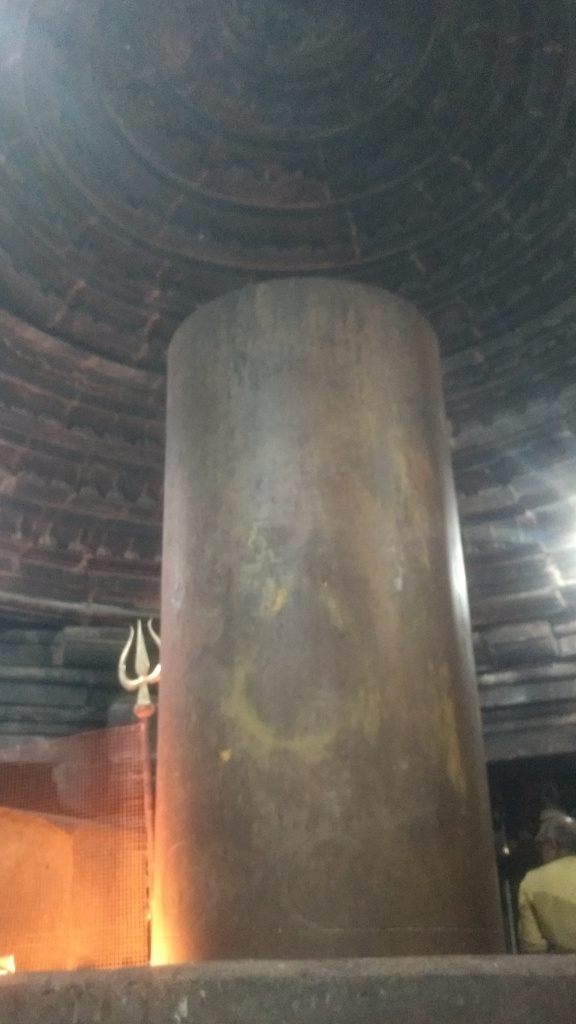 The Eastern group of temples belonging to Hindus includes Brahma temple, Javari temple and Vamana temple. These temples are relatively smaller in size and scattered in the Khajuraho village. Vamana temple is dedicated to Vamanavatar, an incarnation of God Vishnu. The temple was completed between 1050 to 1075 AD. According to a myth, Vishnu took the form of a dwarf (vamana), who in just two steps covered the earth, sky and abyss. 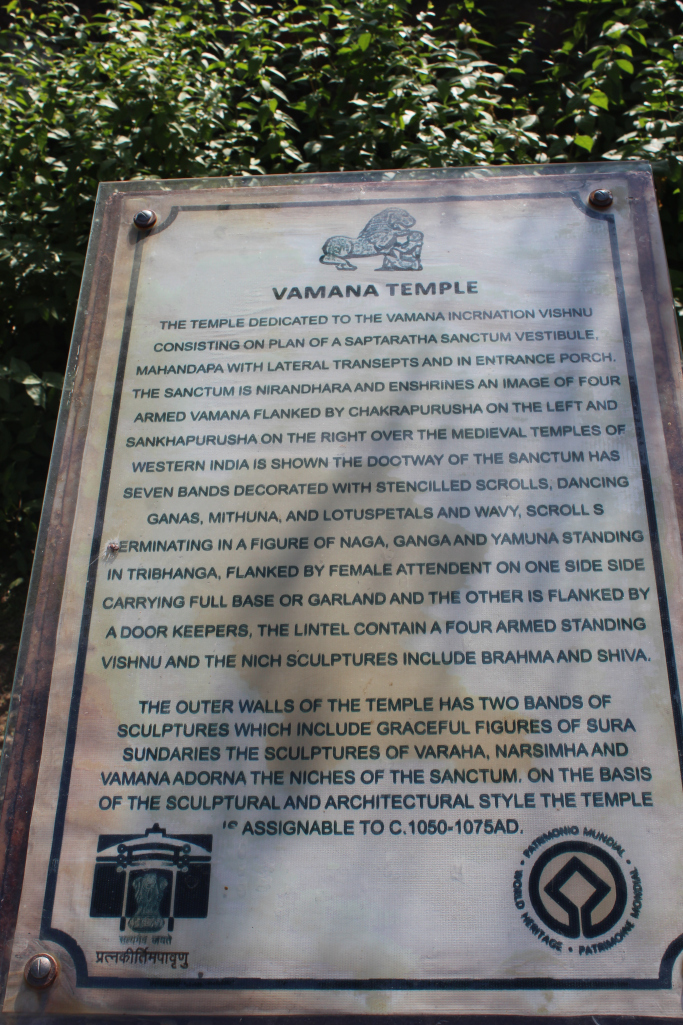 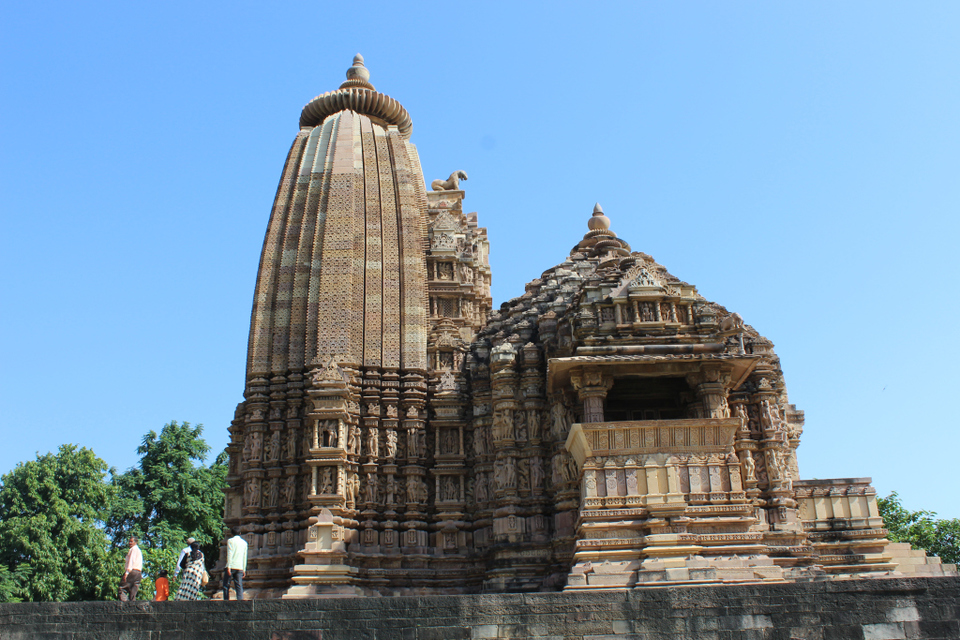 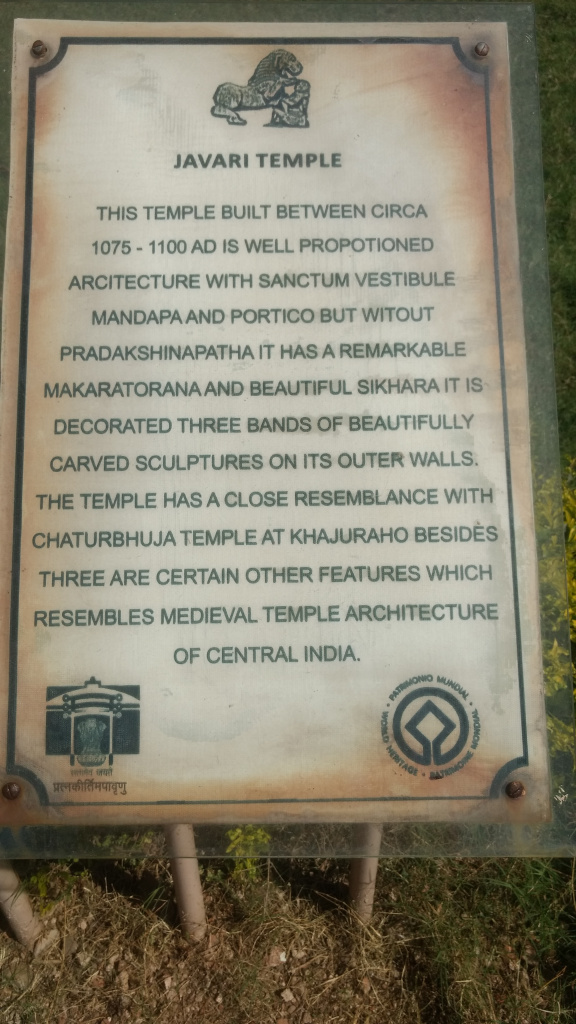 Very beautiful Capricorn Arch at the Entrance of Javari temple 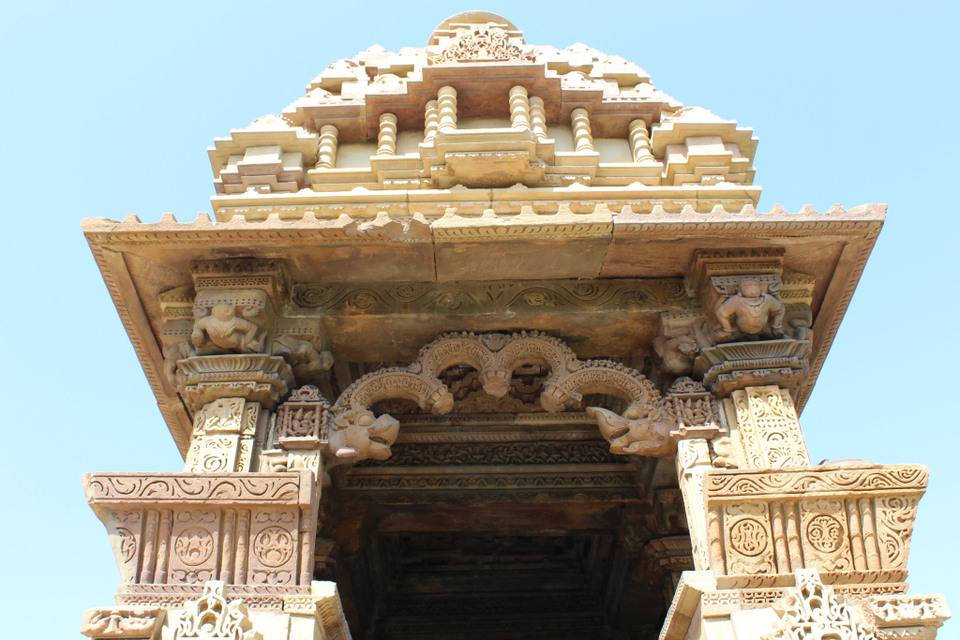 Beheaded idol of God Vishnu, the deity of Javari Temple 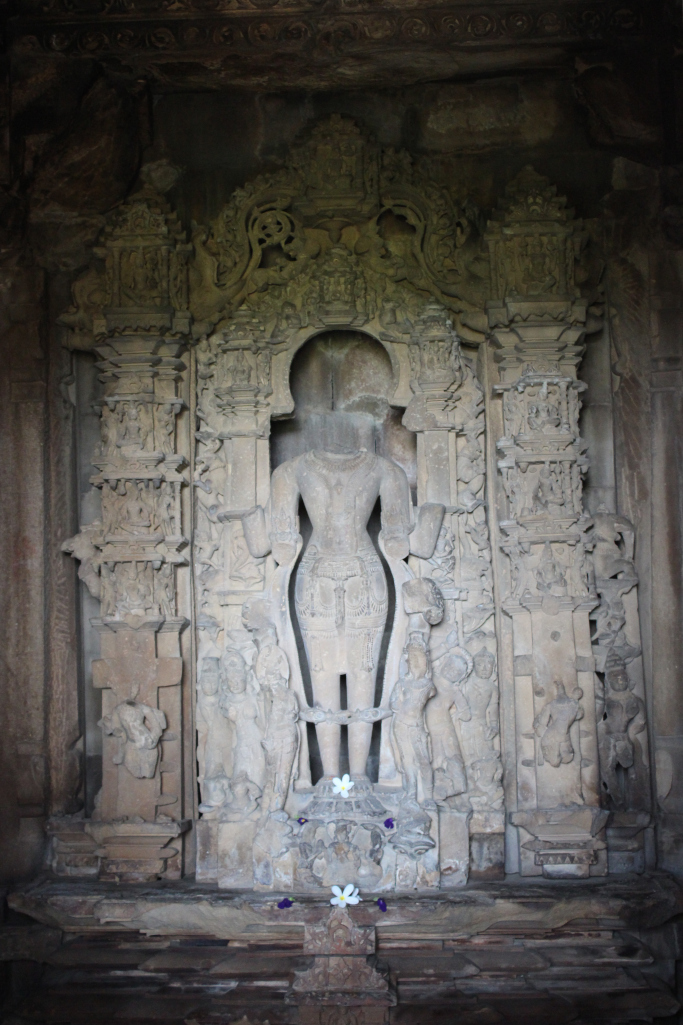 Intricate sculptures at the outer walls of Javari Temple 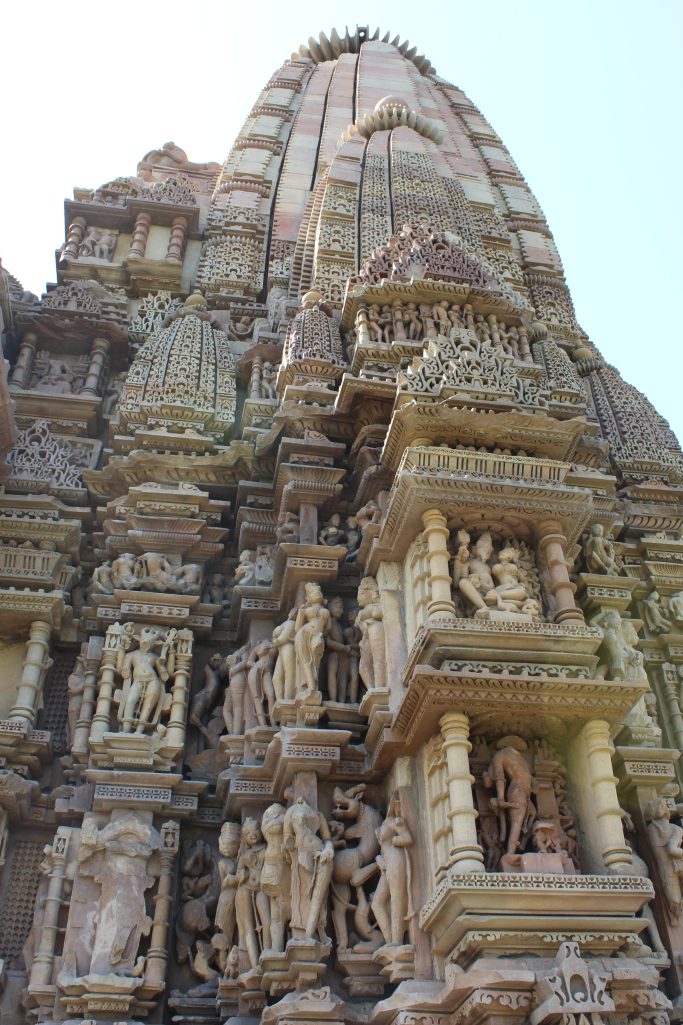 The Southern group of Khajuraho temples consists of mainly two temples, the Dhuladeo temple, dedicated to Lord Shiva, and the Chaturbhuj temple, dedicated to Lord Vishnu. The southern groups of temples are situated 5 km away from Khajuraho village. As compared to the temples of two other groups, the temples of this group lacks the sculptural refinement and excellence. The Dhuladeo temple, located south of the Jain group of temples, was constructed years after the other temples. The Chaturbhuja temple, located much further south, is in a dilapidated condition but has a finely rendered 9 ft high idol of Vishnu.

The researchers and scholars have explained eroticism in these temples in their own way and many recognition are given. As per Vidya Dehejia, a professor of South Asian Art at Columbia University, "These sculptures depict the rites of the Kaula and Kapalika sects. These sects believed that only those who can resist the sensual temptations can achieve salvation. To realise whether one can rise above such temptations, one had to experience them while remaining unaffected. Thus, these sects provided a theological excuse for the over-indulgent Chandela rulers to engage in the most debased practices".

Fred Kleiner, a professor of art and architecture at Columbia University, believes these sculptures symbolise "fertility and propagation of life and serve as auspicious protectors" of the sacred temple.

Whatsoever is said by the scholars in relation to these temples but one thing is for sure that if stones could speak, the temples of Khajuraho would be creating melodies.

A random click at the western group of temples..

Khajuraho offers even more to it's lovers apart from its magnificent temples.

Khajuraho Dance Festivals: During 20-26 February, Madhya Pradesh Kala Parishad organises a one-week festival of classical dances, the 'Khajuraho Dance Festival'. It is held annually against the spectacular backdrop of the magnificently lit Khajuraho temples. The dances are performed in an open-air auditorium, usually in front of the Chitragupta temple and the Vishvanatha temple. This cultural festival highlights the richness of the Indian classical dance styles such as Kathak, Bharathanatyam, Odissi, Kuchipudi, Manipuri, and Kathakali. The festival features dance performances by artists of world fame. However the entry is free.

Light and Sound Show: Witness Khajuraho's history unfold at the specially curated light and sound show at the Western Group of temples. The show is organised daily (might get cancelled during heavy rains and bad weather) after sunset in Hindi and English languages. The ticket windows for light and sound show is around 200 mts. ahead of main entrance. The entry ticket fee (subject to change) for the event is Rs. 250/- for Indian citizens as well as the citizens of SAARC and BIMSTEC countries. Citizens of all other countries have to pay Rs. 700/-

Archaeological Museum: The Archaeological Museum of Khajuraho is situated at a walking distance from the western group of temples. It was initially known as Jardine Museum as it was constructed by Mr. W.A. Jardine in 1910. It was renamed as the Archaeological Museum of Khajuraho in 1952 when ASI took over it. The museum is very rich in terms of several architectural and sculptural ruins which were collected from the temples of Khajuraho. The museum remains open from 8 am to 5 pm daily and remains closed on Fridays. The ticket price for Indians, SAARC and BIMSTEC citizens is Rs 10/- while the foreign tourists have to pay Rs 250/- (subject to change).

You can plan a visit at any time round the year but since all the temples are made up of stones, so I'd not recommend visiting in harsh summer. In rainy seasons however, the entire area becomes very beautiful. In my opinion, October to March is the best time to visit.

By Air: Probably Khajuraho is the only village in the world to have an airport. Khajuraho airport (HJR) receives flights from Varanasi and Delhi. The airport is around 4 km from the town.

By Road: In-spite of being a village, Khajuraho is well connected through all weather roads to rest of the country. Khajuraho is 175 km from Jhansi (a historical city of UP), 413 km from Agra. It's 225 km from Kanpur using NH34. Khajuraho is 30 km from Panna National Park and 190 km from Chitrakoot via MP SH49. The public transport service is not good in M.P., so travelling on your own or hired vehicle is advised.

The backyard of Hotel Mint Bundela 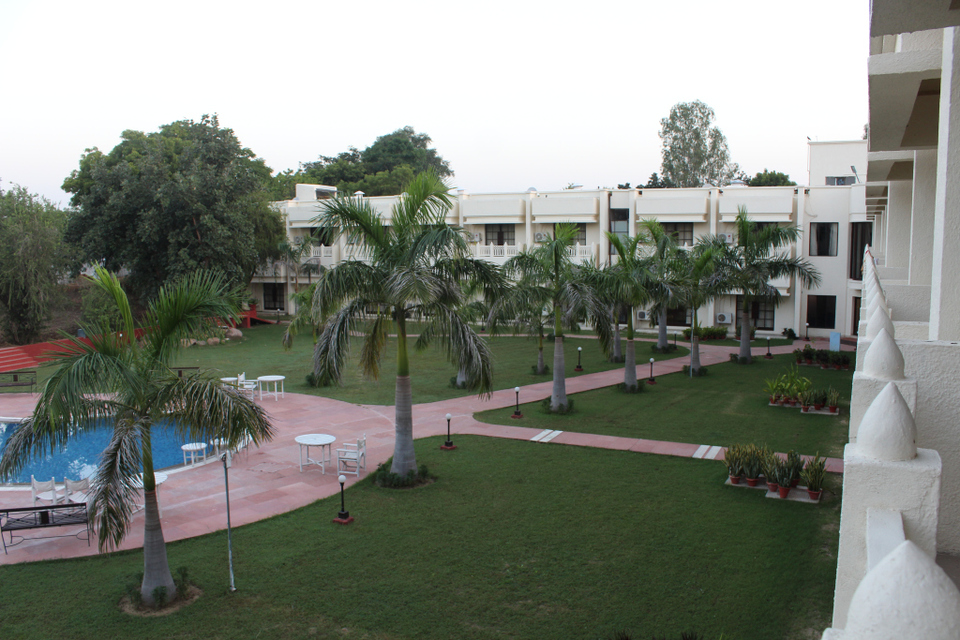 Some relatively cheap options are also available like Zostel hostel, which is just at a stone throw distance from the western group of temples.

Khujaraho being a prominent tourist spot of international fame, you can find cuisine of any type, be it Italian, Thai, Chinese, Continental, South Indian and even Vegan food. Besides big hotels, there are several eating joints too, near the Western Group of temples. Although the absence of big names like McDonalds, KFC, Pizza Hut, Barista, CCD, Domino's is surprising, yet a few good options are available. Like Marwari Bhojnalay (restaurant), ahead of Zostel Hostel, where you can have pure vegetarian food. Right in front of western group is Raja Cafe and the restaurant. It was started in 1978 by a Swiss adventurer who made a remote corner of India his permanent home. There is one Safari canteen in front of ASI museum that serves yummy food. We had stuffed parathas and tea in the brunch. 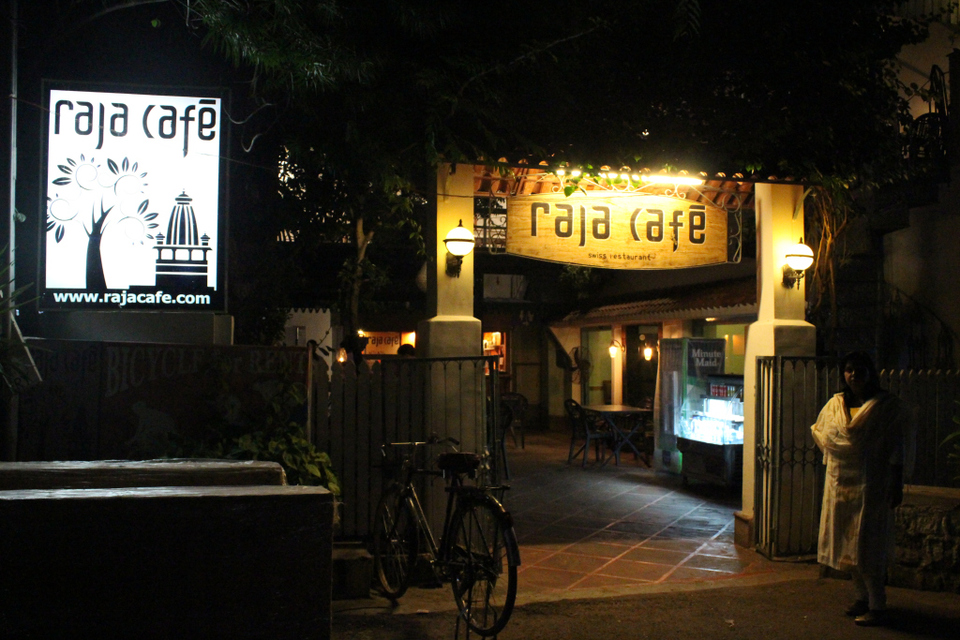 There is a small shopping area in front of the Western Group of temples. You can purchase fabric and ready-made clothes made from fibres of banana stem and leaves, souvenirs, gifting items, books and guides, pictures of temples etc. but don't forget to bargain a lot.