A discovery of the past...

Love is not love

Which alters when it alteration finds,

Or bends with the remover to remove:

O no; it is an ever-fixed mark,

That looks on tempests, and is never shaken…

For no rhyme or reason, for the first time in my life these words from Sonnet 116, which had been relegated to my rote memory since the graduation days, seemed to make perfect sense. I was doubly sure, tantamount to mine; this would have been the most probable thought to cross the Bard’s mind had he seen the towering sandstone wonders of Khajuraho.

What would you get for having successfully borne with your impish partner for half a decade? Well, the plausible answer could be different for the ones still in the first leg of their conjugal bliss. But for my boyfriend, who enjoyed ‘Still Dating’ tad more than ‘Just Married’, celebration also zeroed in to either falling sick and ‘meri seva kardo, meri tabiyat karab hai’ sessions, or a booze party with his friends. The fact that we were in two different cities this time seemed to work and after several bouts of coaxing, planning and brain wracking session, Khajuraho looked like the most convenient tick off destination from the bucket list.

I took the Tamil Nadu Express from NDLS that would reach Jhansi at 4 in the morning while he boarded the Shridhaam Express from Habibganj, Bhopal, which would bring him to Jhansi by 2:30AM. With sleepless eyes and childlike excitement I deboarded the train hoping to see my Amitabh Bachchan waiting to get a glimpse of me even amidst a maddening crowd. (Being outright dramatic, I had already conjured a Baghban-esque meet, only to my dismay.) Having failed to spot him in the vicinity and get connected over the phone, I started marching towards the ladies waiting room braving a downpour, only to find him enjoying a laugh from his latest Agatha Christie (I am sure he is still at it)!!

Following a small argument, (that’s our way of showing love. Remember the way Khadak Singh and Shyam  exchanged pleasantries in Hera Pheri? It’s quite the same) and his exchange of a ready-to-make Wai Wai as an anniversary gift we headed towards our destination by 7am. There are two ways of making it to Khajuraho; either board intermittent trains from Jhansi or hop into a bus. We opted the second. The bus journey demands a change from Chattarpur bus stand. While the journey upto Chattarpur seemed a relaxed one, the state transport vehicle dawdling through the desolate streets of the heart of the country, the one from Chhatarpur bus-stand to Khajuraho was nothing short of a roller-coaster ride. In the close-to-an-hour journey  the driver could have given any Formula 1 racer a run for money!

In the thick of relentless hope of making it alive to revel in the grandeur of the centuries old structures; courtesy the one-hour of racing, we finally descended at the Khajuraho bus-stand at close to 11 and trust my word, it was quite a feat!

Hopping into the first cycle-rickshaw we reached our hotel with a Francosized name called Casa Di Williams. The peculiar thing about this town is the residents’ obsession with the West that is overtly reflected in their lifestyle. Blame it to Khajuraho’s immense popularity abroad or the deluge of tourists visiting every year, there is something oddly archetypal about this place that bears testimony to a high influence of the West.

“’Khajur’ means date palm and ‘raho’ stands for road. Circa 950 CE this place was strewn with date palm trees and thereby derived the name Khajuraho ”, said Shatrughan Namdeo. His short frame stood in total contrast to the universe of knowledge he carried about the ‘Land of love, the Land of KAMA SUTRA’.  Following a trifling bargain, our erudite and hyper-articulate guide finally settled upon a decent amount to take us on a verbal voyage down the era of the valiant Chandel Rajput kings who wanted to bequeath Khajuraho as a religious destination and thereby constructed a slew of temples.  All who want to relish the exalting history of the temple town and understand its architectural significance, wandering through the town without able guidance would mean hunting for stars in broad daylight.

Khajuraho, according to Mr Namdev, is meant to be enjoyed at different levels:

History: A discourse on success, devastation and revival

The quaint temple town parked in Panna district of Madhya Pradesh is more than an embodiment of love, or relics of a prosperous past.  Khajuraho is a monumental testament to how craftsmanship can breathe life into sculptures and make their expressions do the speaking.

Each Chandel king who returned triumphant in a war would raise a temple to celebrate his success. This led to the construction of 85 splendid pieces of art that saw the gradual evanescence of the Chandel dynasty. Following the subsequent destruction in the hands of the invading Mughals emperors Mohammed Ghazni, Aurangzeb and Sikander Lodhi, only 22 temples remained. Centuries after bearing the trials of time and standing as pantheon of ruins among the densely forested region of Panna, the forsaken tetris-like structures were rediscover by British explorer TS Burt. Only as late as 1982 the Group of Monuments (monuments because as per Hindu believe, a ruined structure ceases to be a temple) were given the belated status of World Heritage Site by UNICEF.

Mythology has it that the Moon God was badly smitten by chance upon seeing Hemvati, the daughter of Hemraj, taking a shower. Unable to control his desire for her, he descended upon earth and seduced her. As a result of their union Chandravarman, the founder of the Chandel dynasty, was born.

The place also houses some of the oldest Jain temples, which, akin to the other temples like Western Group and Eastern Group of monuments are also divided into several parts. 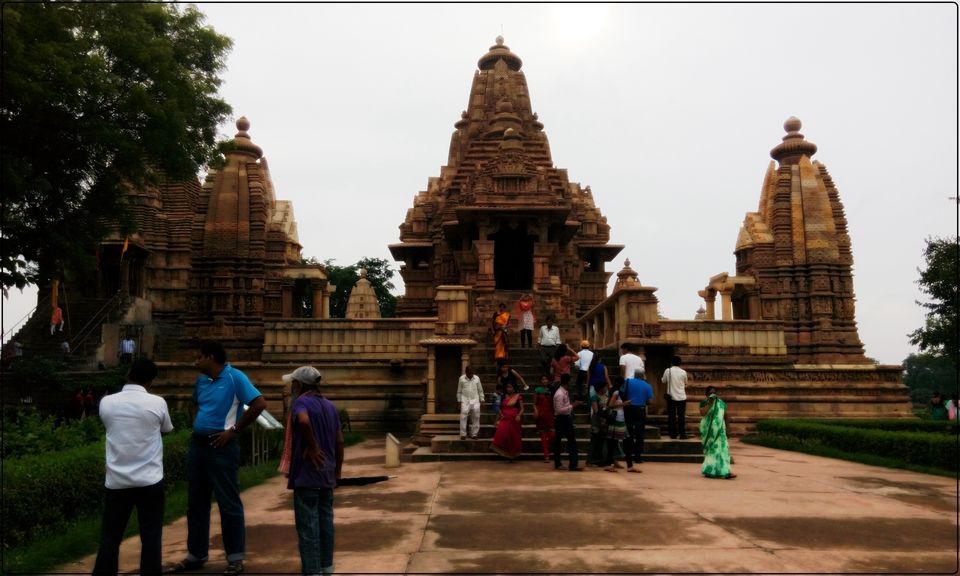 Architecture: A tale of consummate craftsmanship

The speciality of the set of monuments lies in their appearance. Interestingly they look like being carved out of several small mountains. The non-functional temples were built of sandstone and granite heaps of which were found on the banks of Karnawati River (now known as Ken) that lies between Khajuraho and Panna.  Block by block and column by column these stones were chiselled and the carvings engraved on them. The blocs were marked with numbers and assembled after being carried to Khajuraho on elephant backs. It could only be credited to the brilliance of craftsmanship of the era that after almost an epoch the cement-less temples that were built on the interlocking system of stones still stand tall and eloquent.

In the heavy baritone of Amitabh Bachchan a light and sound show at the Western Group of monuments take people on a hallucinating journey to the past. 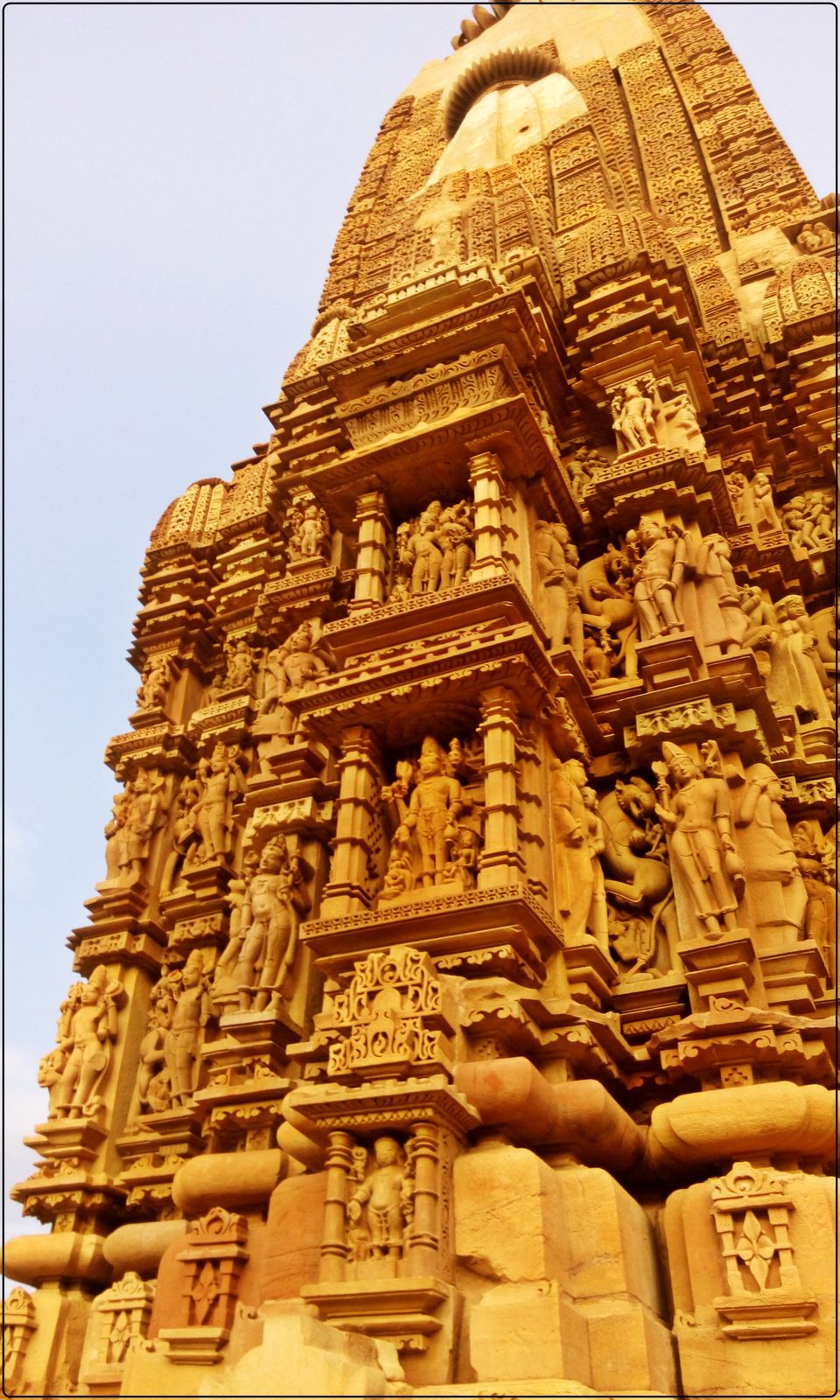 The Epithet of ‘Kama’ or Carnal emotions

My plans of visiting Khajuraho raised several eyebrows among friends and family. And why not? Incidentally, just a week before I would leave for Khajuraho my mother started narrating how she had read about the temples there. Given its reputation for being the Land of Kamasutra, of course she could not talk much about it and I decided not to divulge my plans to her anytime soon. (She is still oblivious!)

The ‘kama’ or sexual desires have different connotation, said Mr Namdev and one has the discretion to decipher meaning according to one’s whim and fancy. One account says since youngsters were sent to Gurukul at a tender age, by the time they grew up and returned home, they would nearly renounce all hedonistic pleasures and the sculptures were crafted as reminders to arouse the youngsters’ interest in erotica. 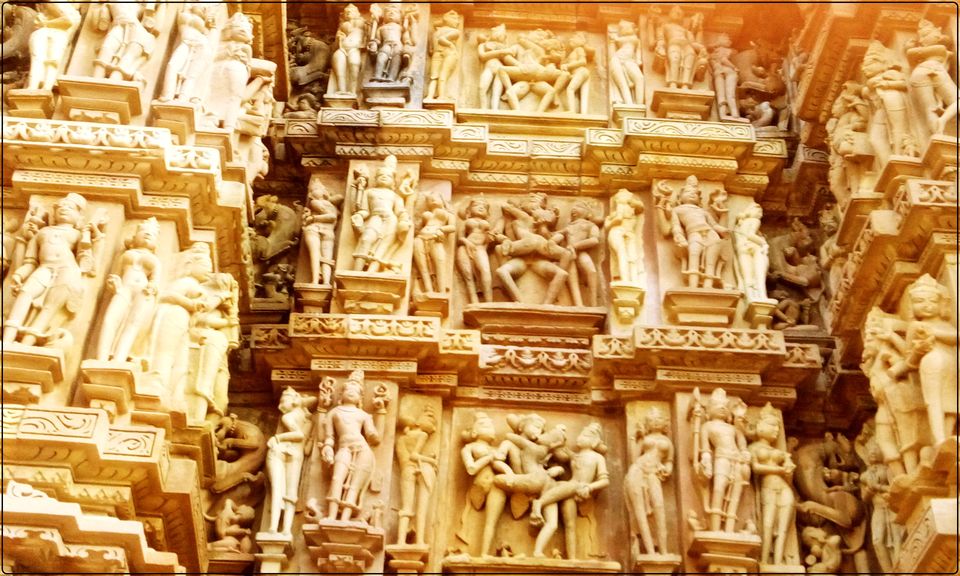 Food trail in the temple town

As a devout connoisseur of food, the first thing to draw my attention anywhere I go is the kind of food the place has to offer. Spotting a pastry shop by The Leela’s while entering the town had soared my gastronomical hopes rather high. However, the restaurants and food aptly defined ‘Naam bade aur darshan chote’. The suave and fancy names could do little to tantalize my palate. So, after a reckless food hunt, we discovered this lesser known Bundelkhandi dhaba a little away from the main market. A highly budget-friendly thaali of Rs 150 offered a sumptuous spread of rice, dal, kadhi, baingan ka bharta, chutney and a type of puri typical to the region. Needless to mention, the place was a food haven for our brief stay of 2 days. Of course, The Leela’s was a saving grace. Not a lavish menu, but the confectionaries served tasted just out of the oven.

A piece of advice- The high-sounding restaurants in the town does not provide much more than burning a hole in the pocket. So, when in the Bundelkhandi land, do as the Bundelis do.  Ditch the bland pizzas and pastas The Maharaja or Restaurant on the Bamboo Tree provides and rather settle for shuddh desi romance with authentic mouth-watering Bundelkhandi delicacies. 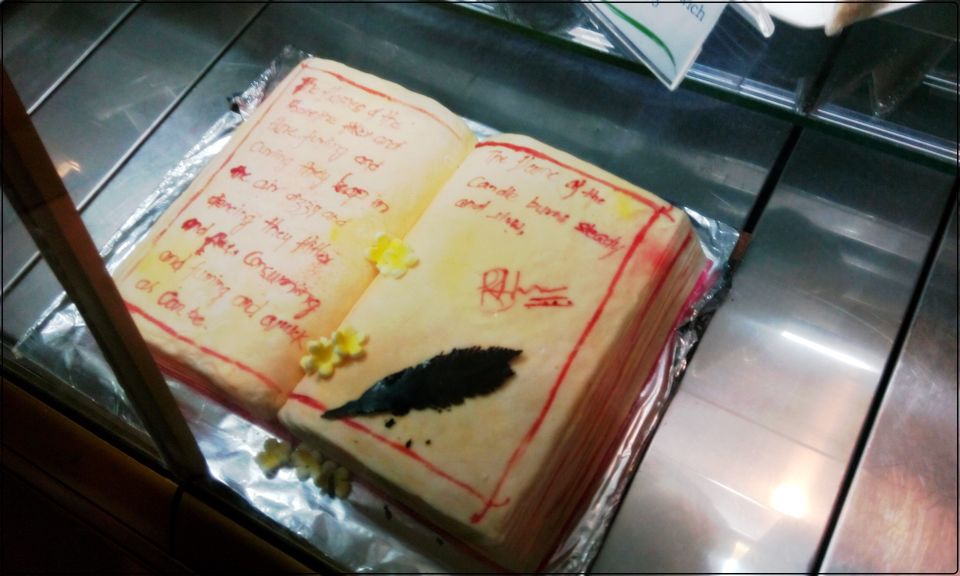 When I asked a senior who had gone for coverage to Khajuraho Dance Festival conducted in February every year, about the kind of keepsakes Khajuraho has on display, he quipped impromptu, “A lot of kinky toys!” Period. 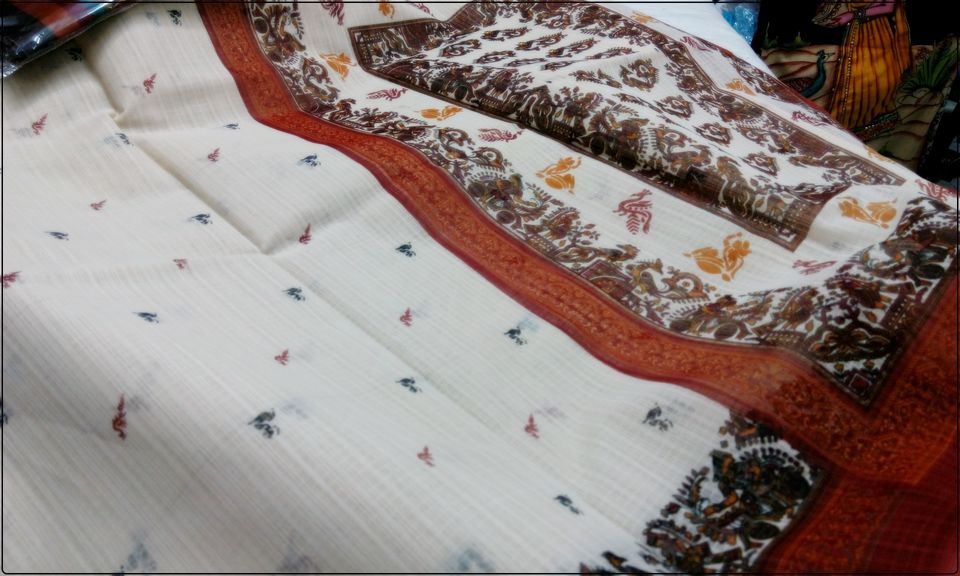 The great canyon of central India

That Khajuraho is nestled in the lap of nature with beauty in all directions work befittingly in its favour. It not only shares a proximity to Panna national park and Ghariyal Sanctuary, the two falls enveloping the town- Pandav and Raneh are a feast for all nature lovers. With time just enough to visit either, we went ahead with Raneh Falls, not only because the photographs looked exotic, but also because I largely wanted to drop by the place in which parts of Mira Nair’s controversial Kamasutra- A Tale of Love were shot in.

About 20kms away from Khajuraho, a distance that can be easily decided with any local driver for as much as Rs 500, both ways, stands the majestic and breathtaking Raneh Falls. Watching the water of Ken gushing down in the form of 30metres and 60metres high water falls makes you reinstate the presence of an intangible power that is holding the universe together. The puddles of still water engulfed with red stone structures give an impression of the Canyons and is thus aptly called the Grand Canyon of India. It is impossible for anyone having a functional heart or the gland that generates emotion to not get laconic at the sight of the falls. They are beautiful, and splendidly so!

Going to Khajuraho but skipping the water falls is like eating only half the food in the platter. 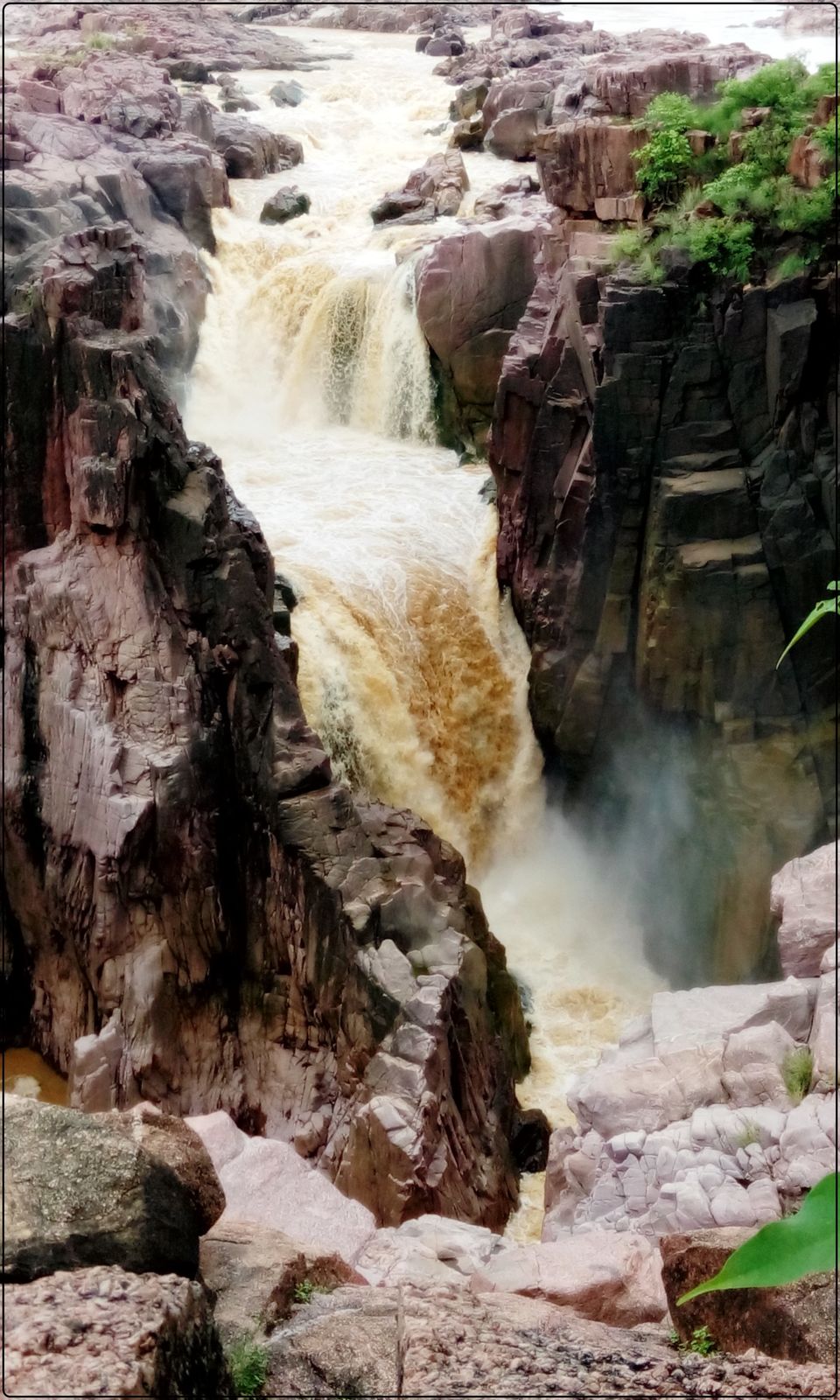 The adage goes, ‘All’’s well that ends well. It was a helluva journey. Crazy because only after reaching Jhansi did I realize I could board a direct train from Khajuraho to Delhi! Perhaps, it was destiny’s call to bestow some more moments with my ‘his-head-has-swapped-places-with-his-heart’ boyfriend that soon after we arriving at the Jhansi station we were informed that my train was delayed by 5 hours and his had been called off. Having spent some more quality ‘we’ time discovering the street food on Sadar Bazar of Jhansi, I finally bid adieu and watched him hopelessly standing at the door as the train chugged along the station to move towards its destination, a place where I would live the two-day memory for many months to come…