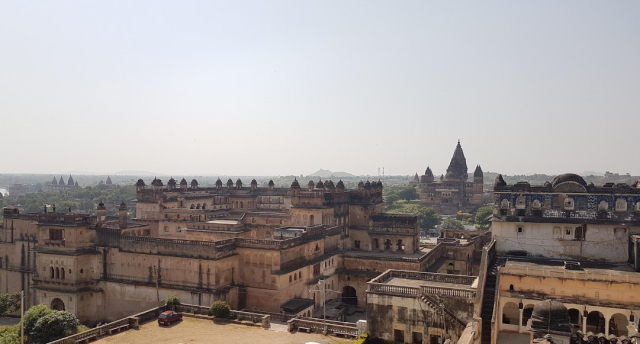 Our plan was to stay at Jhansi but when enquired most of the travelers suggested us to stay at Orchha which is barely 16-17 kms from Jhansi, as it has many of the beautiful properties to stay better then Jhansi, so now we were heading towards the "Historic town - ORCHHA"

Orchha?? Why is it called so and what did that mean was a question that we were asking each other - Google said it meant HIDDEN.

We were seriously not expecting much out of it; it was just a stopover with a peaceful and great place to stay. But stepping into this city we realized it is truly a hidden treasure in the heart of India, with loads of history to speak and experience.

The historic town of Orchha in Madhya Pradesh (INDIA), nestled on the banks of river Betwa. The town consist of some of the oldest monuments and temples.

Orchha is an ideal weekend getaway from Delhi, Kanpur and Bhopal.

We picked Amar Mahal to stay, but would recommend to stay and explore Sheesh Mahal which is within the palace and worth the stay, it is currently managed by MP Tourism.

However we didn't stay their but I wished we stayed there and experienced staying at the place where royal families use to stay may be next time whenever we will visit Orchha we are surely going to book it. I will definitely suggest you people to book it if you are fond of heritage properties.

It is a modern resort designed in the form of historic palace, best to stay when you wish to experience the royalty of Bundelkhand Era. This Palace is build like the Rajputs house of Bundelkhand. Away from the busy city life this place will surely give you great experience.

For entertainment purpose every evening there is a regional musical performance which you are definitely going to enjoy. We were really very happy visiting this royal Haweli.

Next morning, started our day with a healthy organic Breakfast. However, the options were limited but all the vegetables were from the hotels in-house farm.

After getting ready as per our itinerary we moved forward to experience the magic of this majestic town.

Driving down the city the first place we headed towards was Raja Ram Mandir.

As per the native people of Orchha the story of Raja Ram Temple is as follows;

The queen was a devotee of lord Ram she footslog to Ayodhya and bought the idol of Lord Ram, Spiritual gurus told her to take the idol directly to the place its needed to be installed and not to keep it down at any cost. As the queen was tired and thirsty walking for long in no time she entered the kitchen of the house and placed the idol in the kitchen and started drinking water from the water pot, without realizing she was forbidden to keep the idol at any other place except the desired place of worship. Later when she tried to pick up the idol to place it in the temple, she was unable to lift it and it remained there itself, from then Lord Ram's idol is worshipped at that house and the temple is called 'Raja Ram Mandir'.

Madhukar Shah the King of Orchha was a devotee of Krishna and his wife's dedication was to Rama. Following the approval to build the Chaturbhuja Temple, the queen went to Ayodhya to obtain an image of Lord Rama that was to be enshrined in her new temple. When she came back from Ayodhya with the image of Rama, initially she kept the idol in her house, called Rani Mahal, as the Chaturbhuj Temple was still under construction. She was, however, unaware of an injunction that the image to be deified in a temple could not be kept in a palace. Once the temple construction was completed and the idol of the lord had to be moved for installation at the Chatrubhuj Temple, it refused to be shifted from the palace. Hence, instead of the Chaturbuj temple, the Rama's idol remained in the palace whereas the Chaturbhuj Temple remained without an idol in its sanctum. As Rama was worshiped in the palace it was converted into the Ram Raja Temple

It is the only shrine in the country where Sri Ram is worshiped as a king. This temple is from 9 th century

This temple was created for the idol kept in the queens house i.e. "Raja Ram Mandir" & later it remained vacant for many years, the architecture of this temple is worth watching. It will surely take you to your old age fantasy world.

This temple was created in such a way that it's visible from the Raja Mahal. And the idol of God can directly be seen from the windows and balconies of the Mahal.

The temple has a complex multi-storied structural view which is a blend of temple, fort and palace architectural features

At present an image of Radha Krishna is worshiped in the temple. It's a beautiful temple but very sadly maintained and totally ignored by the government like other beautiful hindu monuments of Madhya Pradesh.

Further we visited Raja Mahal and again to our amuse this Mahal was soo sooo huge and ancient ohh myy god and we could roam and explore each and every part of the Mahal, whether its darbaars, rooms, terrace, temple, bathrooms, courtyards etc etc, we could actually relate to the living of kings and queens of that era, whereas in most of the old age monuments public is not allowed to roam at each and every part of the monument as the structure is weak and may get damaged.

This royal residence of former kings of Orchha was amazing. Beautiful towers decorated exteriors of this magnificent palace, and outstanding mural paintings adorn the interiors. Paintings convey the different stories some of the paintings are ruined but many of them are easily visible with all its vibrant colors.

The images below shows some of the beautiful paintings and art work of that era i.e 16th-17th century

The palace is constructed beautifully with impeccable architecture and breathtaking grandeur, the palace has kept the soul of the India's most renowned royalty intact through all these years. The palace has magnificent towers and spectacular murals which will make your visit here an absolute delight especially if you are a- art enthusiast.

Jahangir Mahal is mostly made with Mughal Architecture.

The ruler of the region Vir Singh Deo built the structure as a symbol of warm reception of the Mughal Emperor Jahangir, during the latter's first visit to the city.

The domes of the Jahangir Mahal, were built according to Timurid customs; it's grand Lawns are large enough to accommodate the entry of war elephants, and its high position over the landscape allowed cannons superior range.

The story associated with this Mahal was that emperor Jahangir and Raja Vir Singh were very close friends and when emperor Jahangir was facing trouble from his father due to his affair with a ordinary girl(not a princess) he told it to the Raja that he wants to escape from his father it was then Raja made this Mahal for him to stay, as per Mughal architecture the door of the entrance should be always from West, but Raja made it as per the Hindu archeology from East, the doors at the entrance were made in such a way where one need to bend his head down to get inside which was not acceptable by the Mughal Emperor ,he felt insulted & didn't stay there for long.

This place Orchha has really surprised me with its rich heritage, it has kept our heritage alive and it's something worth visiting. The heritage walk: 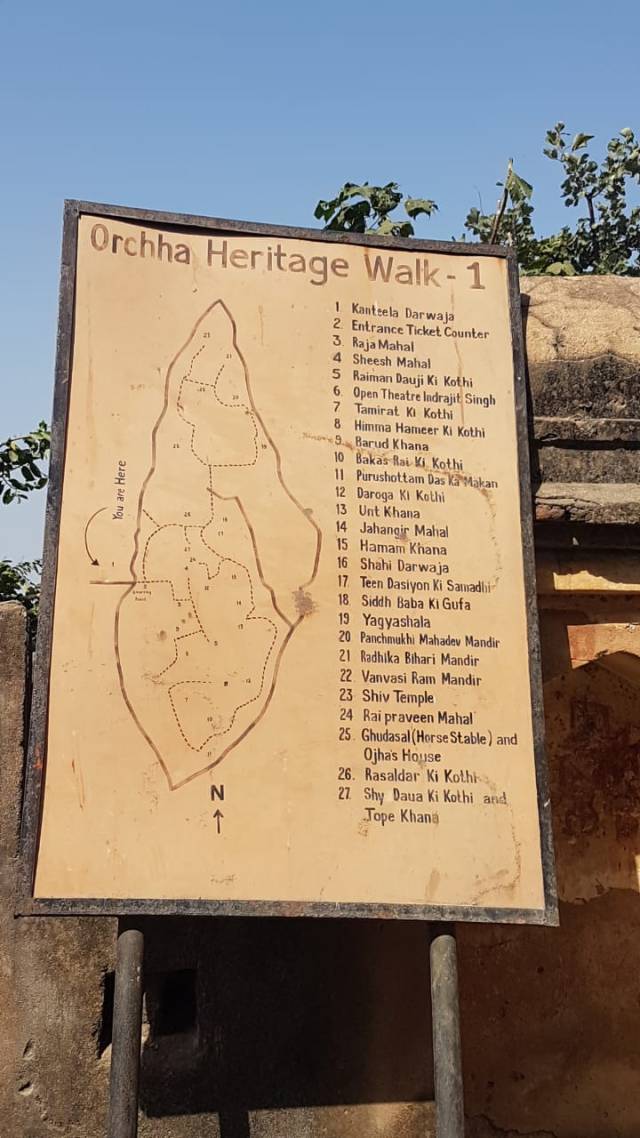 Please share your experiences at Orchha in the comments.