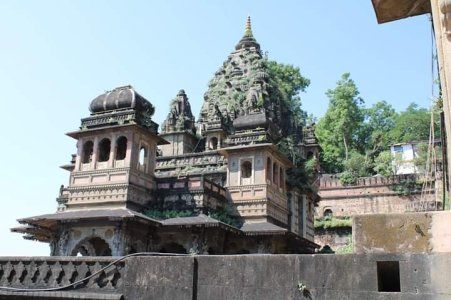 It was Sunday Morning on 13th Oct 2019. We planned to visit Maheshwar Temple in Khargone district of Madhya Pradesh.

Maheshwar is a town in Khargone district of Madhya Pradesh state, in central India. It is located 13 km east of National Highway 3 (Agra-Mumbai highway) and 91 km from Indore, the commercial capital of the state. The Town lies on the north bank of the Narmada River. It was the capital of the Malwa during the Maratha Holkar region till 6 January 1818, when the capital was shifted to Indore by Malhar Rao Holkar III. Maheshwar is believed to be built on the site of the ancient city of Somvanshya Shastrarjun Kshatriya and was the capital of king Kartavirya Arjuna, (Shree Shastrarjun) who is mentioned in the Sanskrit epics Ramayana and Mahabharata.

Maheshwar is full of festivals and celebrations, some are Nag Panchami, Gudi Padova, Teez (New year celebrations according to the Hindu calendar), All Mondays of Shravan month, (DOLA of Kashivishwnath on last Monday, bhang is served as Prasad of Shiva), Mahashivratri, Samoti Amavas, and all other Indian festivals. There are many visiting places like the gold swing is also there and it is situated at Rajwada. Maheshwar also has the temple of Goddess Vindhyavasini Bhavani, one of the 24Shaktipeeths of Goddess Parvati.

The exquisite beauty of Maheshwar and river Narmada is captured in some Bollywood Movies.