The Angkor Wat will steal your heart at first light

Light breaking in at the Angkor Wat Temple 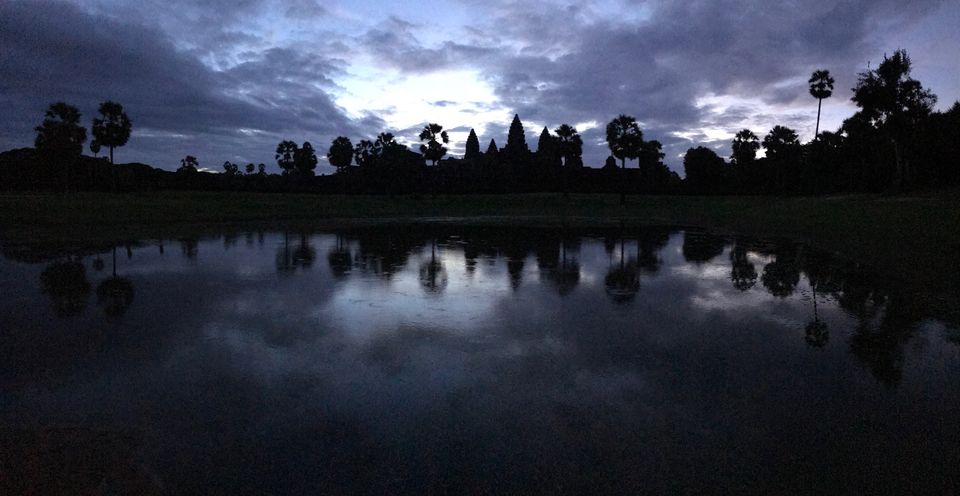 I am not an early-riser and certainly not a morning person; but when I saw pictures of the Angkor Wat temple at sunrise, I knew I could not miss the experience. The over excited traveller that I am could not sleep at night and Googled every possible thing to see at the Angkor Temple complex. The Angkor compound hosts over 1000 temples that are swamped in intricate history. The Angkor Wat temple is the best preserved monument in the huge multiplex of the Hindu exemplar. Angkor Wat is one of the most creatively ambitious pieces of monument to be created by humans that was subjected to a traumatic past making it a symbol of fierce pride for the Cambodians.

Topped up with all the information, I was ready at four in the morning for the pickup. After collecting the entry ticket and other formalities we finally made it to the complex that was accoladed with architectural archways, hardly visible in the wee light. My heartbeat fastened as we went closer to the temple where one could see a faint outline of the massive structure. The local guide parked us near a meagre water body and told us to wait.

The light broke in slowly and words could do no justice to what can only be described as truly breathtaking! I was witnessing the golden hour at the grandest ruins in the world and was happily swamped in the moment. The beauty of the sun rising behind the temple is truly magical and you can keep looking for hours but your heart will not be satisfied. Nobody visiting Cambodia should miss this majestic experience and be a part of the affluent Hindu chronicle.

The Angkor Wat temple is the world's largest religious building with a perfect blend of spiritual devotion and architectural splendour. Dotted with lengthy corridors, galleries, monumental courtyards and decorated chambers, the Angkor Wat is a truly extravagant human achievement. It is impossible to visit all the temples in Angkor especially in a single day.

Next on our list was the "deeply rooted" temple of Ta Prohm that is famous for the Tomb Raider film. This particular ruin is a show stealer for not one but many reasons. If feels as if a giant monster has spread its magnanimous arms around the structure and tried to crush it, giving it a dilapidated look. It is every bit worth the hype and my personal favourite. The wrecked rocks of the temple are intertwined with the muscular roots of trees that run all around the campus. Interestingly the structure of the building is not glued together by anything and giant pieces of rocks are just placed one over the other. It is only a wonder that the formation is still standing tall after hundreds of years. The crumbling stones, withered leaves, sky scrapping trees and carved stories not only make Ta Prohm a scenic delight but also makes one feel that the jungle is swallowing the temple.

Another alternate to skip the crowds at Ta Prohm is the Ta Som temple that is highly decorated with colossal roots. The entrance is mythologically prominent where the face of Buddha is facing in all four directions. The façade inside is heavily covered with trees and their extensive shadow making Ta Som a traveller's retreat. Other temples to visit at the Angkor complex are Pre Rup, Prasat Kravan, East Mebon, Neak Poan and Bayon.

It is not necessary to be a devotee to relish the magnificence of these temples. Walking down the corridors of the Angkor Temples makes you want to jump on the time machine to witness the true grandeur and celebrations that would have taken place there. A walk through the Oriental Age is what we all need this summer to be lost in gothic tales and tattles. The Angkor Temples are an unprecedented gift of the Khmer dynasty to the world and definitely should be on every wanderer's bucket list.