As soon as you enter Cambodia, you know you are in the Angkor Wat country. The banners, the cafes, the guesthouses, the decorations, and even the beer will have not-so-subtle allusions to the grand temple complex that has put the country firmly on the travel map. The two have become so synonymous with each other, that most people make the mistake of just flying in to Siem Reap, spending three days discovering their inner Indiana Jones and simply flying out. With Air Asia revolutionizing air fares in that part of the world, it even starts to sound like a doable weekend itinerary. Travel styles differ with each person, but this particular idea does not speak to me in the least. Especially after having been there.

Cambodia is a country that boasts an incredibly textured history. The glory years of the Khmer Empire in the 12th and 13th centuries resulted in the explosion of temples in what was at the time the world's grandest complex of temples, forts and moats. However, a visit to Phnom Penh and the nearby Killing Fields is a sobering reminder of how equally destructive the human race can be. Descendants of the very same race that dreamt up the impossible scale of Angkor were responsible for one of the bloodiest periods in human history - the Khmer Rouge. This rich patchwork past all lies carefully curated in the different museums around the capital city, making for the perfect introduction to Cambodia and the Khmers.

Start with Phnom Penh, allow yourself to cringe at the full cruelty of Pol Pot's regime and the complete disregard for human life under it. With those images in your head take the long trip up to Siem Reap, and brace yourself to be overwhelmed in quite different a manner. If you have a day at the temples, hit the 'big four' -- Angkor Wat, The Bayon, Ta Prohm and Preah Khan -- but know that you're cheating yourself. If you have three, go visit the other smaller temples and revisit old favourites. If you have a week, enjoy the luxury of spending entire days at the temples that really speak to you -- read a book, take a nap, beat the crowds by reaching at odd hours, and take in the sunrise from a different temple every day -- every single part of Angkor is so quirky and different, that the temple fatigue you have been warned about won't have the time to even raise its hand. Make sure you stay hydrated and find a way to cheat the infamous heat. There will be times when you will be unsuspectingly hit by the realisation that there was one man who had the power, imagination and foresight to be able to order construction on this unprecendented scale. Account for that intensely humbling moment. It will define your whole trip.

PS: I have listed the Angkor temples in the order we visited them in, which was basically the most commonly trodden route. To beat the crowds, hit them in a more haphazard manner. Even if you can't beat them, trust the grandeur of the surrounding monuments to drown them out. Don't sweat it.

Phnom Penh, for most people, can be a slightly underwhelming experience. It struggles to find a balance between the ancient and the modern, and the two seem haphazardly put together. It lies on the banks of the Mekong, but is not as atmospheric as some of the other oriental cities the river gushes through. However, it boasts some wonderful museums, and the Wat Phnom (Hill Temple) -- that gives the city its name -- makes for a nice stroll with the setting sun. 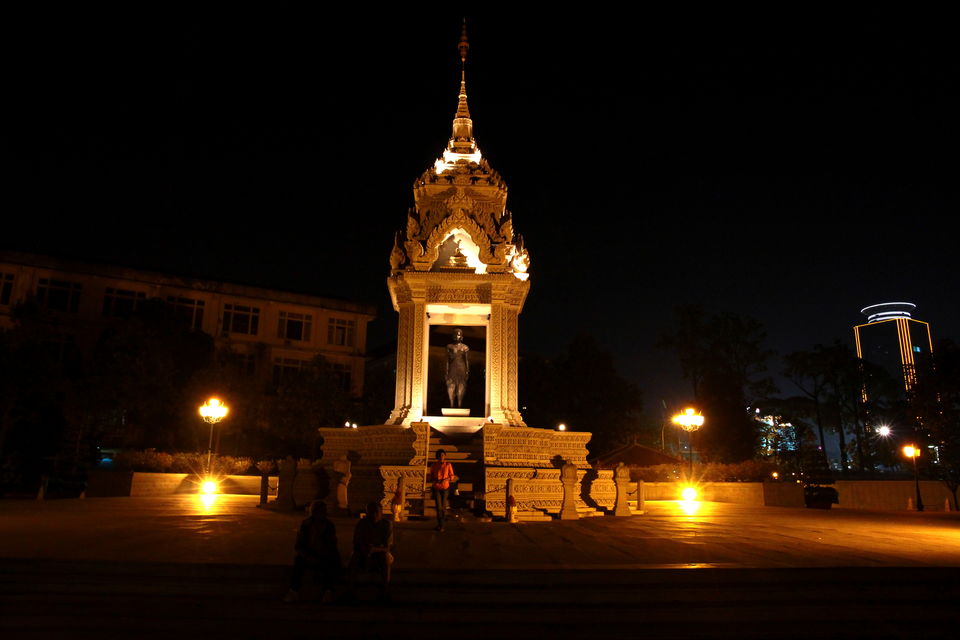 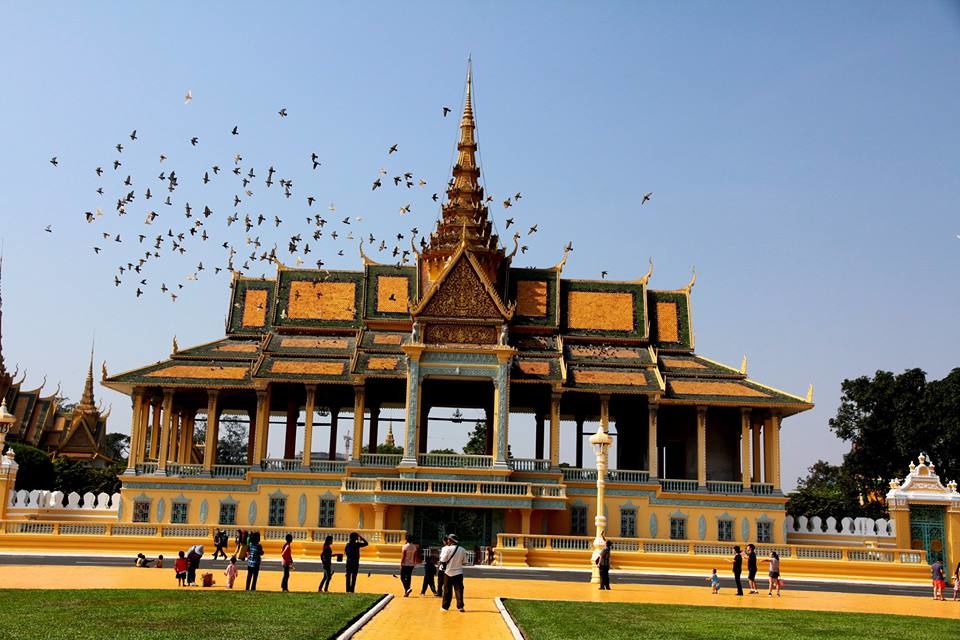 The Khmer Rouge -- led by Pol Pot -- executed nearly one million intellectuals, professionals and foreigners between 1975 and 1979 at various sites around the country that have come to be called killing fields. Choeung Ek, the killing field near Phnom Penh, is the best known of the lot and houses a recently built memorial that stores the skeletal remains of nearly 5000 victims. Several floors of skulls laid side by side may be a chilling sight, but it comes at the end of a nearly hour long audio tour that attempts to bring to life the chilling atrocities that were committed on the very same grounds that now seem so shadowy and tranquil. For the best experience, come early in the morning before the crowds start to flood the place, and drown yourself in the evocative tone of the audio guide as it relates accounts of victims, and spares you no graphic details of what might have occurred where you stand. Through a bringing together of music, poetry and story-telling, it is an experience that will move the most emotionless to tears. Allow the emotion to take over you. There is no time you are more alive than when your heart is breaking. 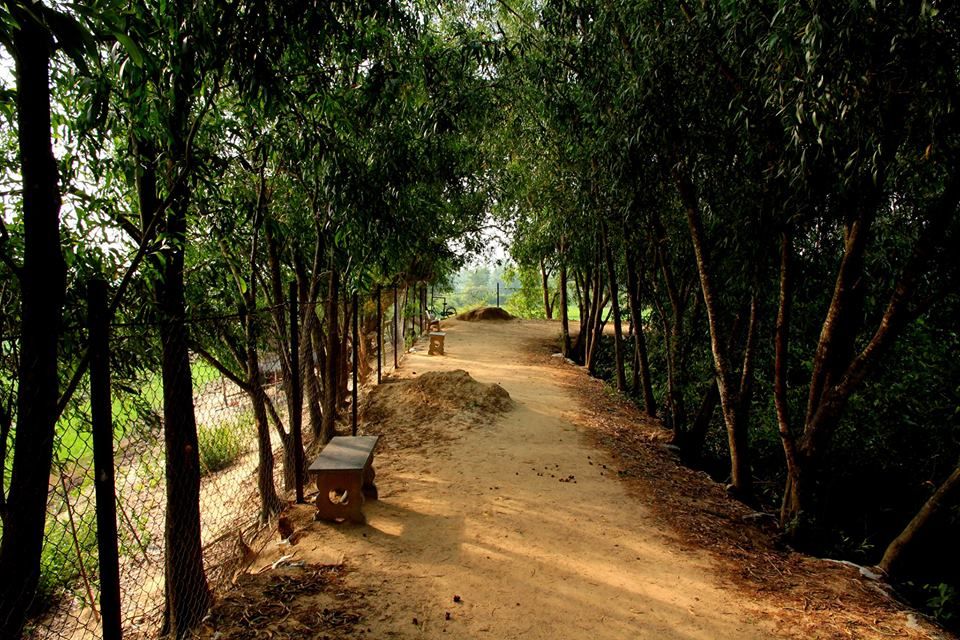 If you are looking for a cure to the overwhelming loss of faith in humanity that you are sure to feel after a visit to Choeung Ek, the nearest one is at the National Museum in Phnom Penh. Located in a graceful red building that whips up all sorts of Oriental dreams, it houses a vast collection of art, sculpture and handicrafts from all periods of Cambodian history. All sorts of Hindu and Buddhist images present themselves in different forms throughout, making us constantly exclaim about the parallels with the heroes in the mythological epics we lapped up in our childhood. The airy, breezy museum is located around a central courtyard with tiny lotus-fringed ponds, pebbled paths and lush greenery, making for a great place to unwind between marathon museum-ing. 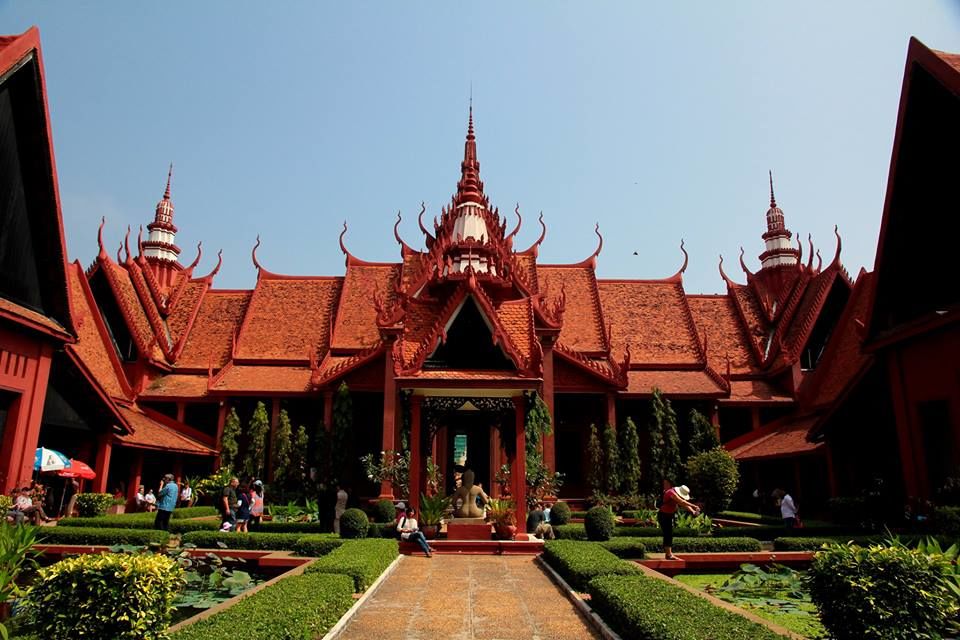 One of the sad parts about Siem Reap being the crash-pad for Angkor temple-hoppers is the fact that it remains just that on most itineraries. The fact that we never got to see it in the daylight tells you how little we really engaged with it, but the little that we did -- for meals and midnight walks and random jaunts -- it charmed us thoroughly. The streets are easily navigable, the famous Pub Street can be seen from a mile away thanks to it trying to masquerade as Las Vegas, and the street food is lovely. Shake off all that exhaustion and hit the town. You'll not regret it. 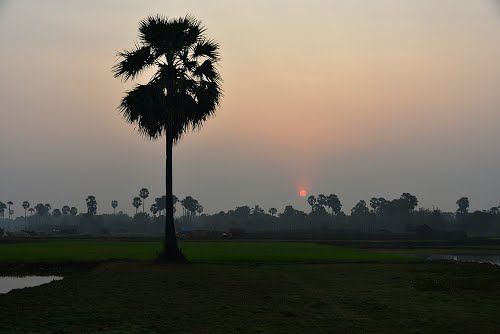 As our first stop and therefore our introduction to Angkor, we ended up spending an inordinate amount of time weaving through this "Citadel of Chambers". Charmed. 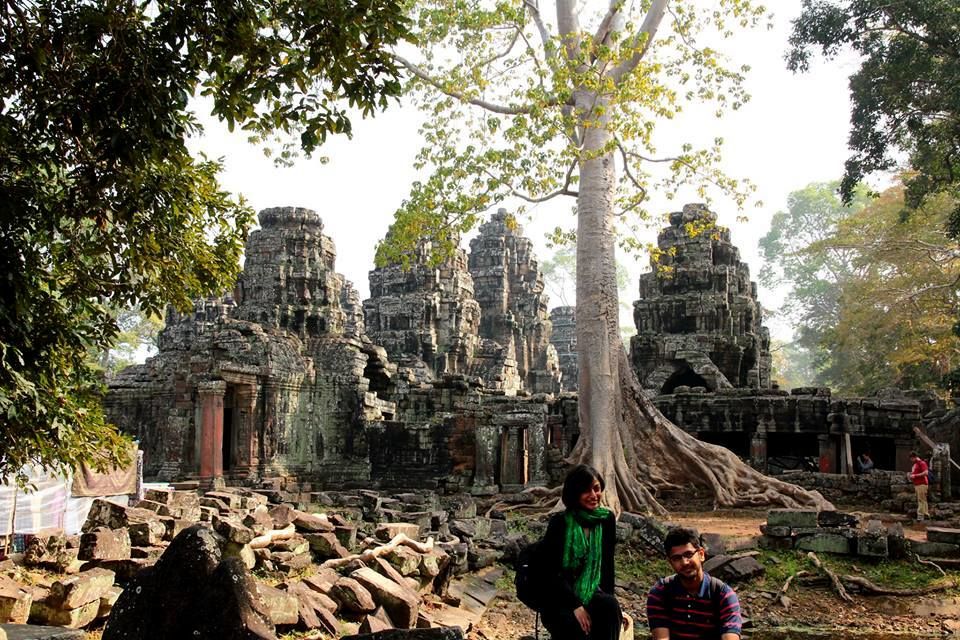 Probably what has come to become the iconic image of Angkor Wat -- of tree roots exquisitely framing a stone entrance -- comes from Ta Prohm. Add to that the fact that Tomb Raider was shot here, that keeps the tourists coming in shameless hordes, and you have in front of you the veritable celebrity of the group. The irony of it is: for a place that has come to be the face of the greatest temple complex in the world, Ta Prohm is not as much about the genius of man as the devastating arrogance of nature. Left in the state as it was found to recreate for the discoverer the feeling of a primeval, untouched archaeological site, most of the structures have trees growing through them and their roots simultaneously destroying and holding them together. However much the hype may be, it will never fail to astound. 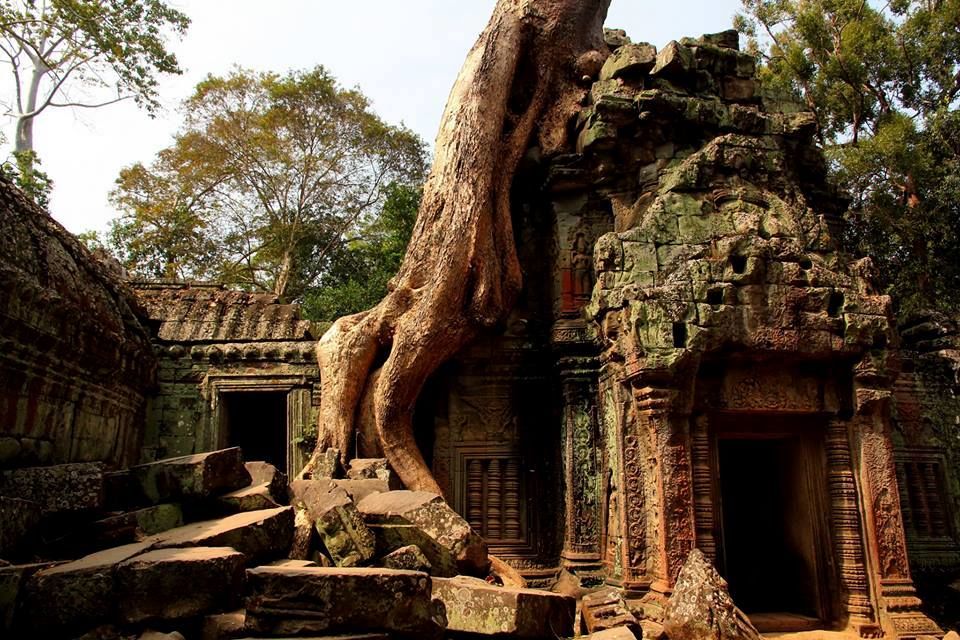 The final and most illustrious capital of the Khmer Empire, Angkor Thom is a vast complex of terraces, temples and water bodies. Walk around the terrace of the leper king, wind through the central complex, risk a nose-bleed from the steep climb up the Phimeanakas temple, and witness Baphoun emerge in all its glory as you walk up the elevated pathway that leads to it. The bridges that lead across from the moat into the walls of this former capital are lined with sculptures of the famous Churning of the Ocean of Milk from Hindu mythology, an image that repeats itself over throughout Angkor. 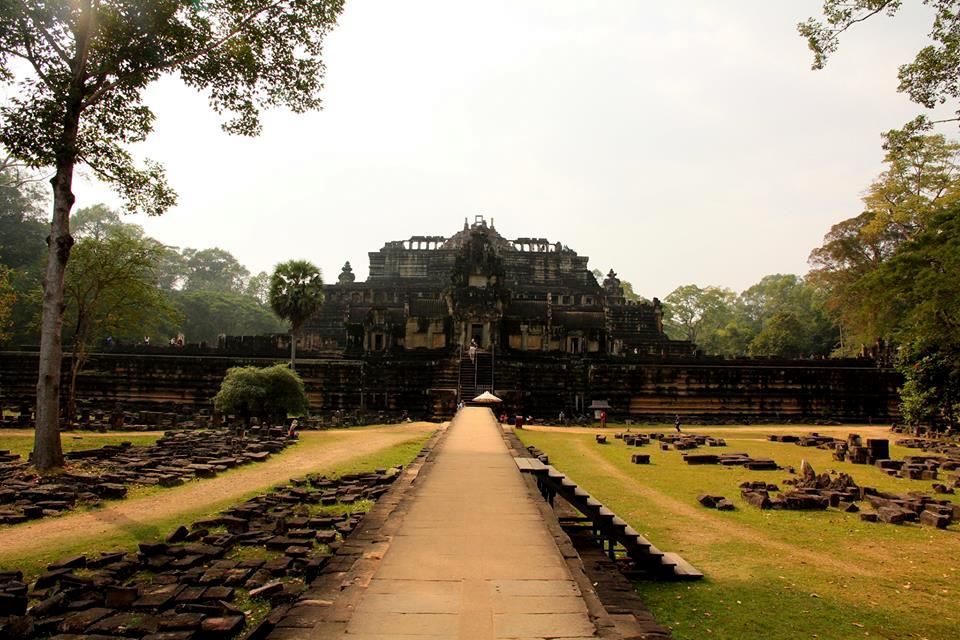 If there is a single most egotistical temple in the world, it must be the Bayon. What looks like several temple mountains from afar quickly morph into a four headed bodhisattva that is said to bear a striking resemblance to the then king Jayavarman II. If carving 216 faces of yourself on every available surface in the most crowded, dense jungle of a temple isn't narcissism, the definition seriously needs reworking. Truly fascinating. 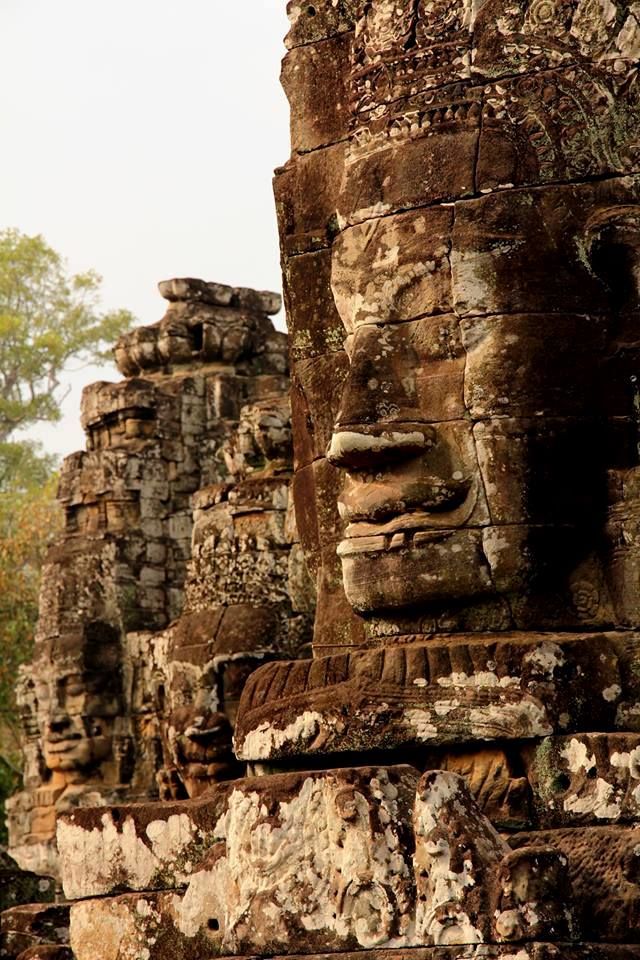 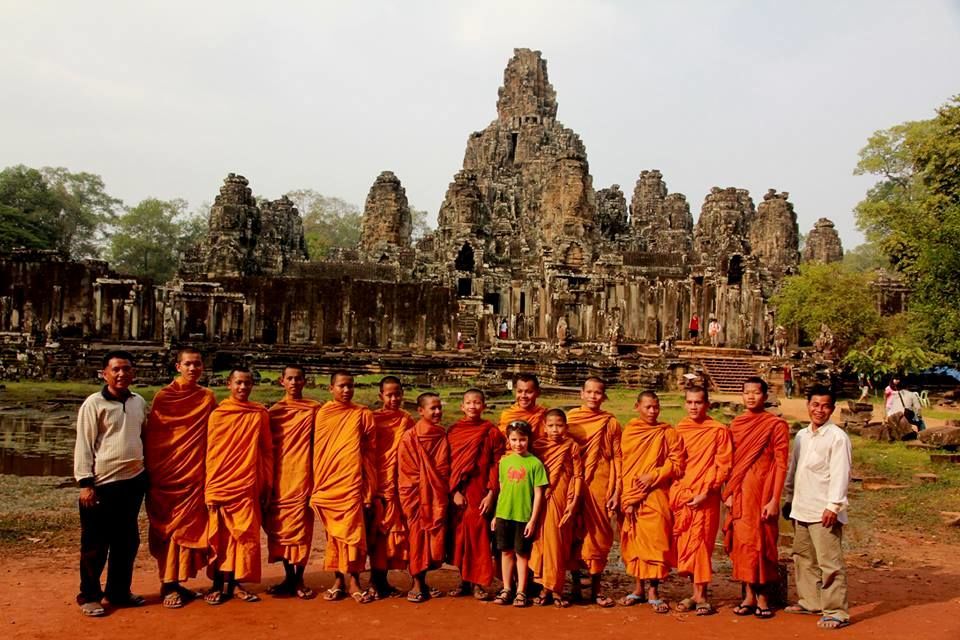 This is the big daddy of them all. The famous silhouette that you have seen on just about every banner, beer bottle and flag greets you at the very entrance, follows you across the moat and grows into an imposing structure by the time you land at its feet. There are two lotus ponds on either side of the main causeway leading to the temple, which is where the famous sunrise and sunset pictures are all clicked. Go ahead and click one for yourself. Sure it may be exactly identical to a million others, but its not every day that you find yourself watching daybreak at the greatest temple complex the world has seen. Its okay to be excited. 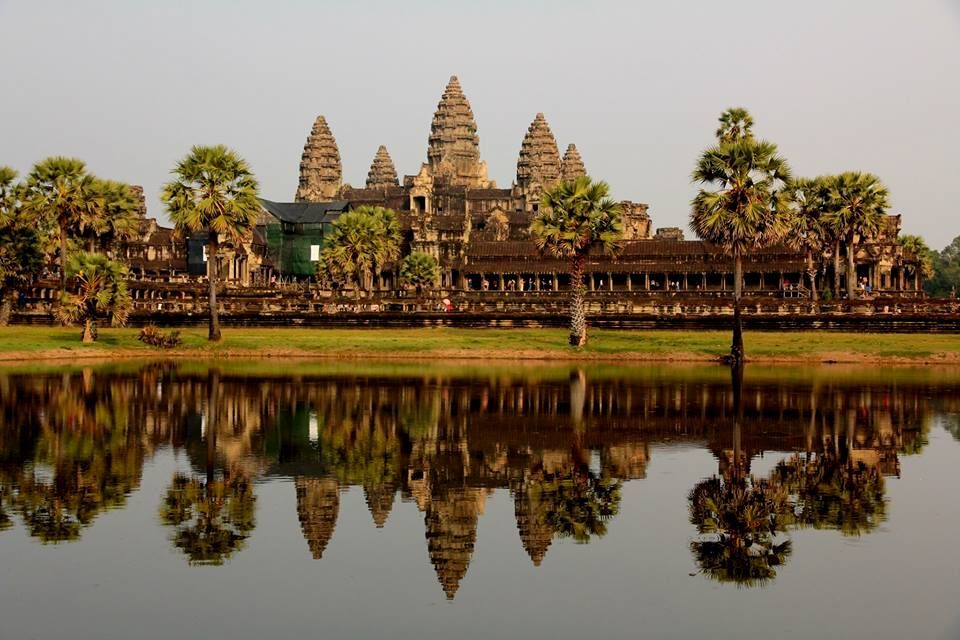 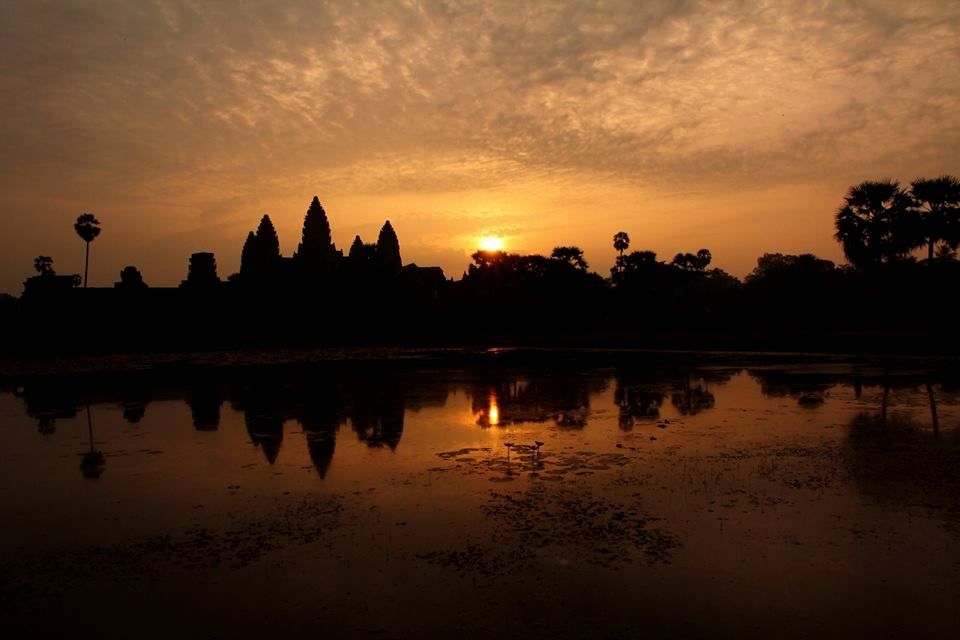 Situated about 30 minutes out of Siem Reap, Bantey Srei stands apart from the rest of the Angkor temples because of its diminutive frame. But what it lacks in size, it more than makes up for in intricacy. It is as if the sculptors were running out of stone -- every single piece of stone you see will be carved with incredible delicacy and beauty -- and what seems like a tiny complex turns into a labyrinth of beautiful yellow sandstone. Don't be surprised if you have several audible gasps as background music. Most might be coming from you. If you had to pick only one temple to go to at Angkor, make it this one. 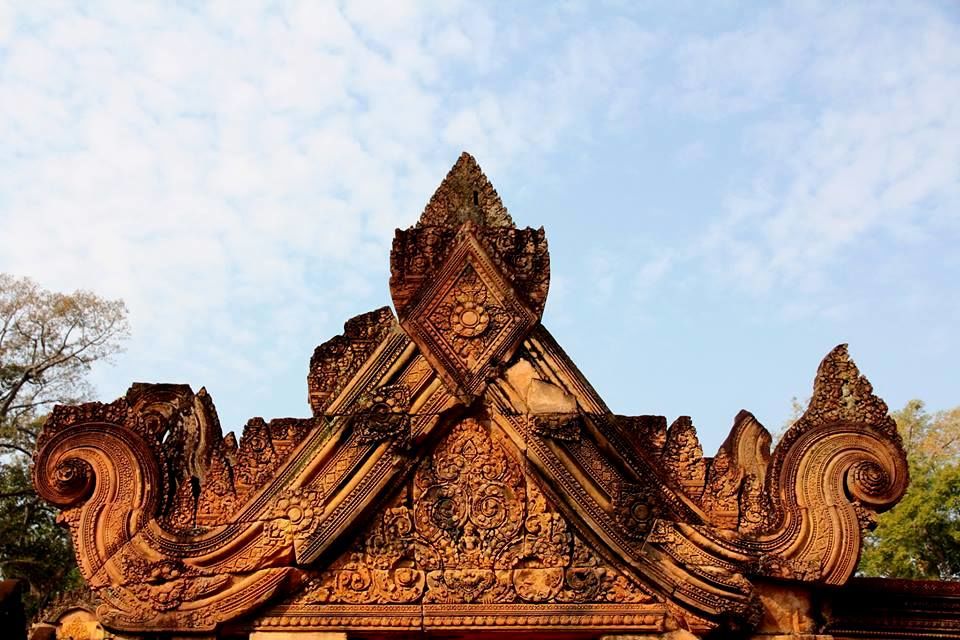 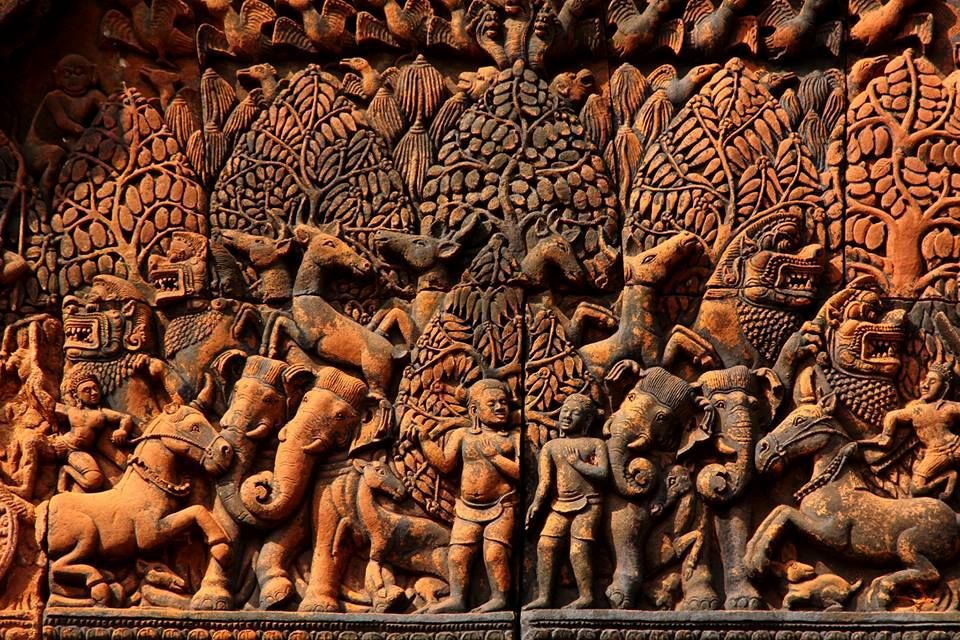 The classic tree growing out of the entrance act is surprisingly more perfect here than at Ta Prohm. It makes for quite a sight, but there is not much to do besides. Quick stop. 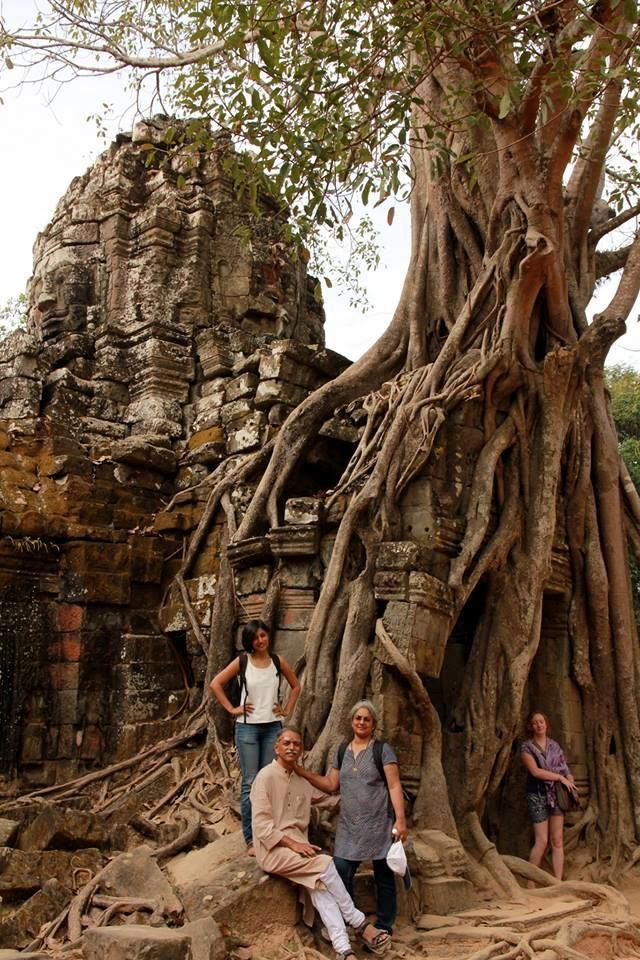 The most underwhelming of the lot to be honest. Not so much because of the structure itself (an island temple situated in the middle of an artificial lake) but because it has been cordoned off in such a way that you don't really get to appreciate any of the loveliness of the actual architecture. The only saving grace is the wooden bridge leading up to the temple through the marshes. Makes for a picturesque walk with bare trees creating beautiful symmetry in the water. 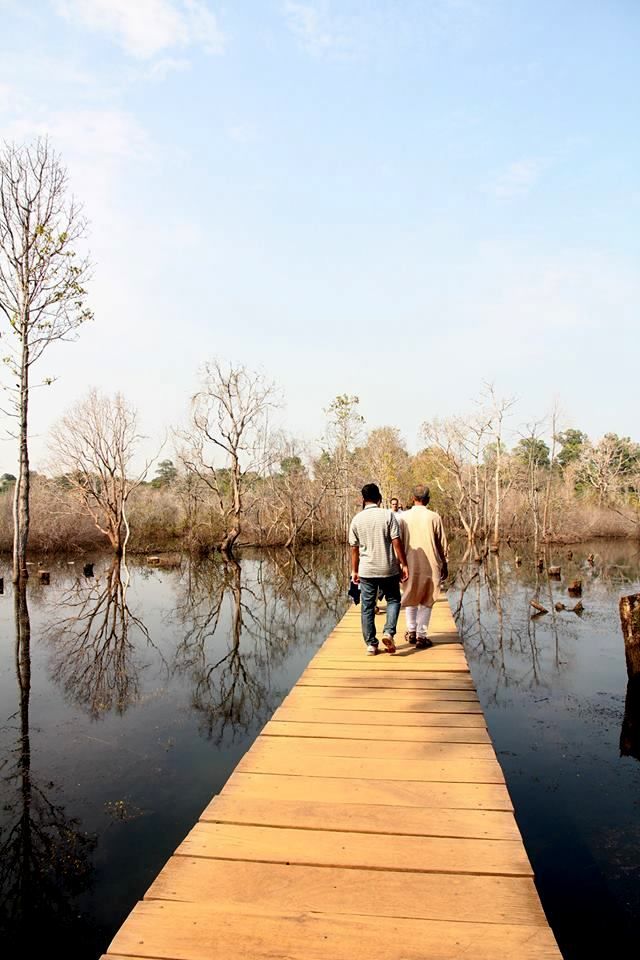 Though this is one of the "big four" at Angkor, it remains the least preserved of the lot and intentionally so. There is plenty of overgrowth and roots growing out of structures. There are also entire parts of the complex that are in a state of disrepair -- adding to the aura of mystery. The complex itself it seemingly endless, with one gallery opening into another and so on. Go with plenty of fluids, this one can be a knee-crusher. 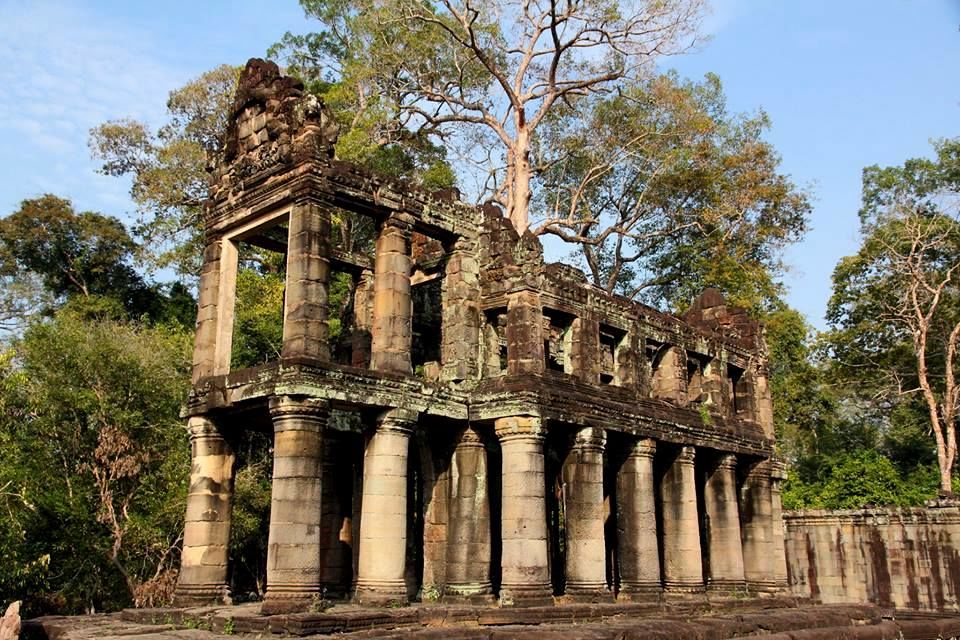 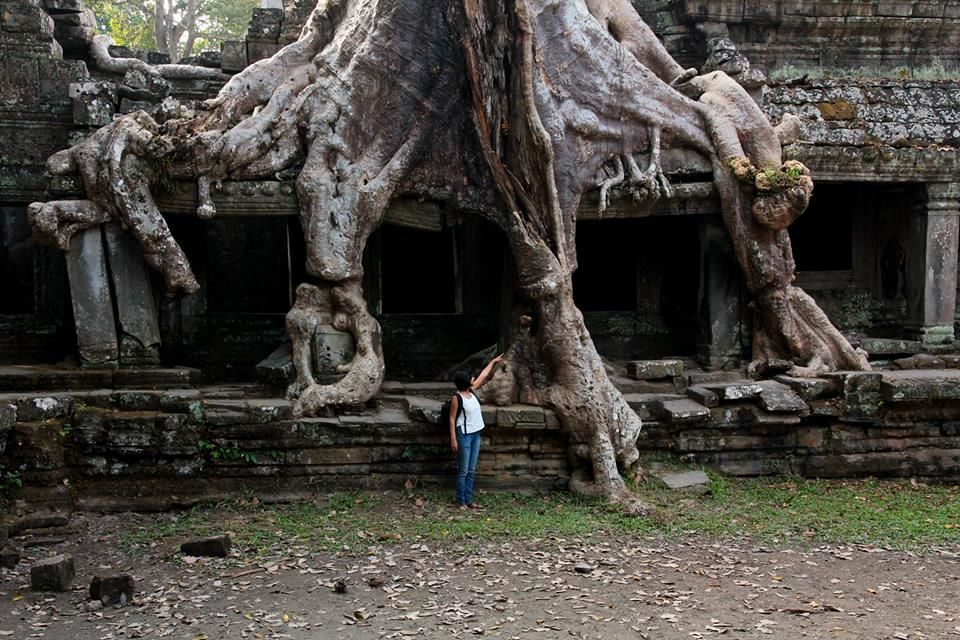