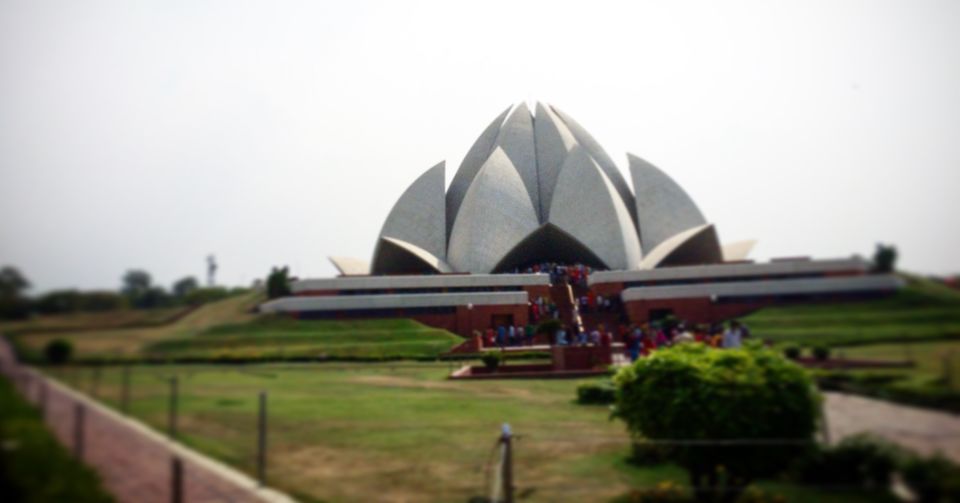 Our visit to Lotus temple was a rather impromptu one and we didn't have any knowledge about the timings and the days on which temple remains closed. As we came to realize later, the temple is closed on Mondays. The first trip to this place was a bust but we went again the next day to this architectural marvel and witness for ourselves why this just might be the thing to go down in the history books as one of the greatest buildings of our time.

Entry to the Lotus Temple is free but no eatables are allowed inside the temple area. However there are a lot of food stalls just outside the temple and they serve the purpose. If you are a fast food fan, you might develop a liking for them.

Best time to visit the Lotus Temple is during dusk as the lighting effects are definitely worth the watch. This place will transform your general mindset about Delhi. This temple is located in a vast area and the garden outside the temple premises offers a lot of beautiful landscape. The aura of this place just cleans the mind and provides inner peace. The ambience of this place is something which is quite soothing and creates an atmosphere which is close to perfect for meditation.

Once inside the temple, you can participate in the prayer sessions of 15 minutes which are regularly organized. One thing which we noticed when we were inside was the temperature difference of the dome to the outside. The sun was at it's peak outside and the temperature was a good 35 degrees, however inside the dome the temperature dropped pretty significantly without any air conditioning. One of the reasons for this was the pools which were just outside the dome and the second one was the construction of this place. It was constructed in such a way that it insulated the inside from the outside.

Lotus temple is one of the first temples across the country to make use of solar panels for electricity generation in the premises. A small booklet is also provided at the temple which give give you about the Bahai religion which is preached there. For more information on it you can go to the information center and they will be more than happy to impart the information they have regarding the temple, it's religious roots and it's background.

Shoes are not allowed inside the temple, but the authorities give carry bags to carry your footwear. Before entering in the temple they give a set of instructions which you have to abide by. These are very basic instructions like not making noise during prayers, not taking footwear inside, not to take photographs and you can easily abide by them without any effort.

Lotus Temple was built by architect Furiburz Sabha in 1986. It is in shape of lotus flower and there are nine pools which light up in natural light. The temple follows Bahai faith. Bahai Houses of Worship are all around the world. It has its distinct culture and concept. They believe in unity in diversity. People of all religions are welcomed here. The marble structure has twenty seven petals that generally attract people towards it. The structure of lotus temple is a common symbol for Buddhism, Islam, Jainism and Hinduism.

Inside the temple photography is not allowed.

But with permissions you can take pictures outside the temple of the gardens and the pools. The petal structure is definitely one of the things you would want to capture from your lens.

Nearest metro station is Kalkaji (violet line). Public transport is also available to the place. Autorickshaw will take about 10₹ from the metro station to the temple.