The Rajbari Bawali - where past meets present, imagination meets reality 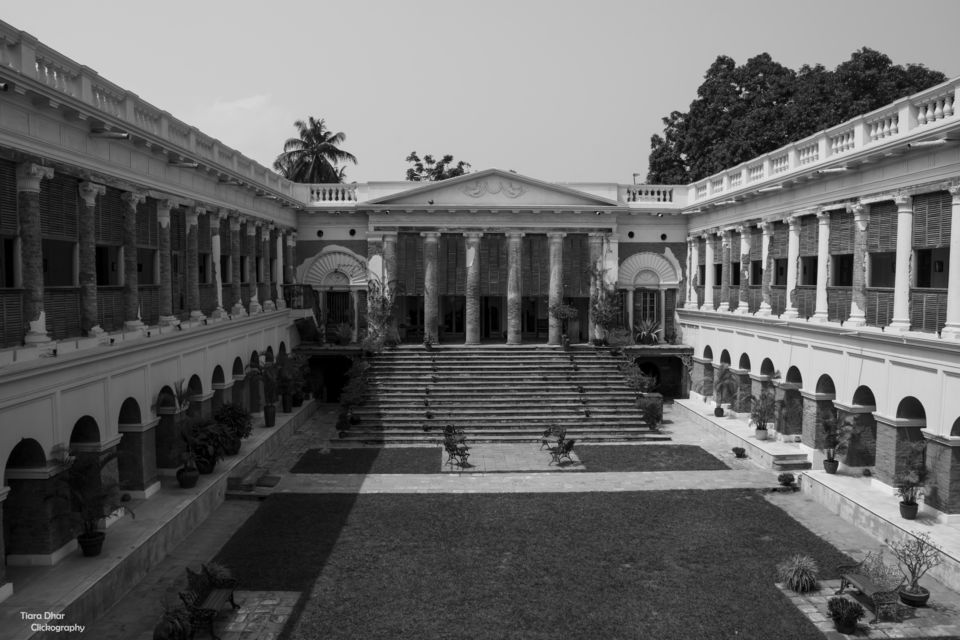 Some places you go. While some, beckon you.

How would you react when you sense that you’re being pulled by something that’s only an illusion, but still exists? Would you run? Or would you embrace your powerlessness? Isn’t life all about treading the unknown? So why wouldn’t you be powerful enough to choose powerlessness? I chose the latter.

That’s the kind of impact some places have on you. An influence so strong that you can almost see the past rush by right in front of your eyes and hear the music that’s never being played. Where imagination meets reality, past meets present - that’s the Rajbari of Bawali, for you.

The Rajbari Bawali is situated around 2 hours from Kolkata, off Budge Budge. The booking process is easy and after a couple of emails exchanged about a week earlier, me and my companions - my parents :-) soon got into the long drive mode one bright Sunday morning. The route instructions were clear but thanks to the explorer in us, we preferred to follow Google Maps and reached the Rajbari. The narrow approach to the palatial mansion deceives the eye because I was expecting large gates and driveways outside! No wonder, after all the mansion is situated inside a sleepy village called Bawali.

Bawali Rajbari is a 300 year old mansion that once belonged to the Mandal family, who used to be Zamindars (landlords) of the village. 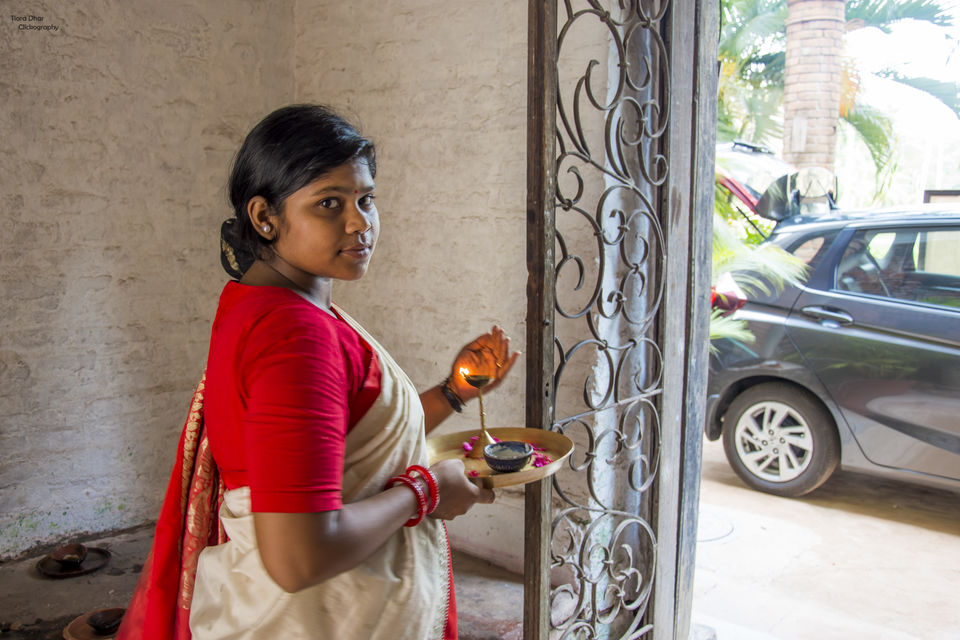 As soon as we entered the main gate, a young girl dressed in a red bordered, off-white saree welcomed us with Aarti and smeared tilak on our forehead. Once inside the compound, the scene transformed somewhat into the sets of a historical movie! We were escorted to the seating area where we were served welcome drink of “Aam pora sherbet”. A major attraction of Bawali Rajbari is the effort that has been put into the Herculean task of renovating the whole place. The high ceilings, the portraits, furniture, all transport you to an entirely different era. One glance around, and you see artifacts, chandeliers, lamps and even books that have been remodeled into lampshades. 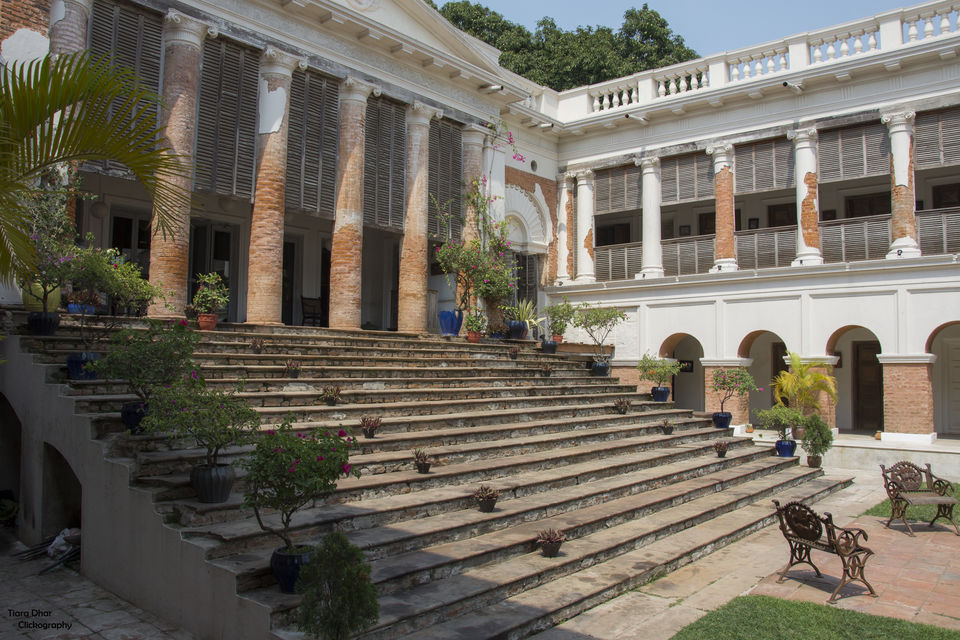 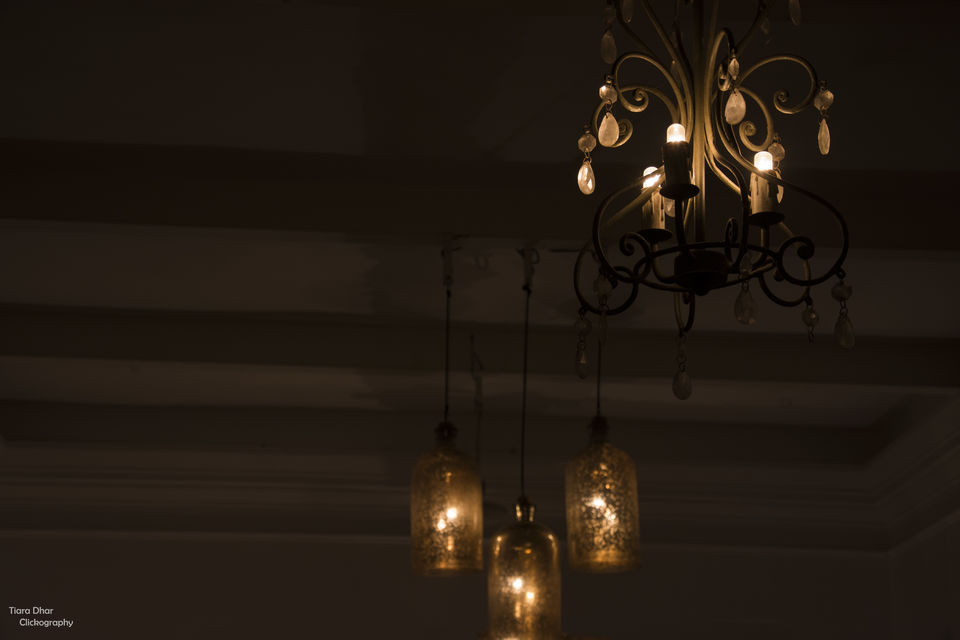 The “Thakurdalan” or the Courtyard has a flight of stairs that leads to a huge dining hall. There are rooms and suites available, namely Classic, Zamindari, Royal, Dak Bungalow and Chhota Baari that you can book according to your suitability. We had pre-booked the Zamindari suite. The rooms are comfortable, just brace yourself for occasional power cuts. Power restoration is quick though.

A portion of the Lunch spread 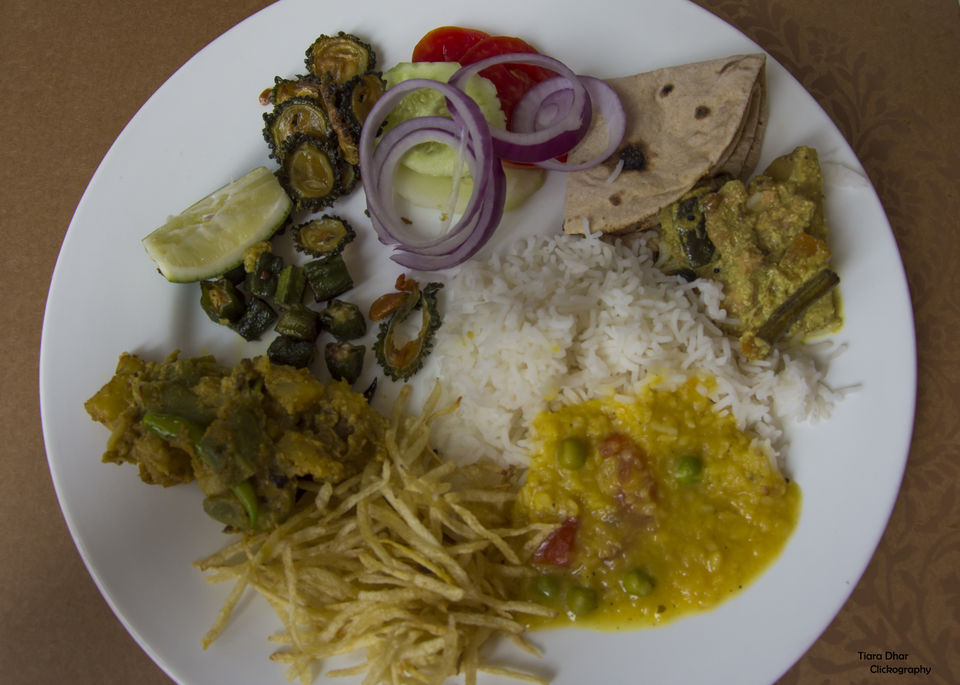 For the sweet tooth!!! 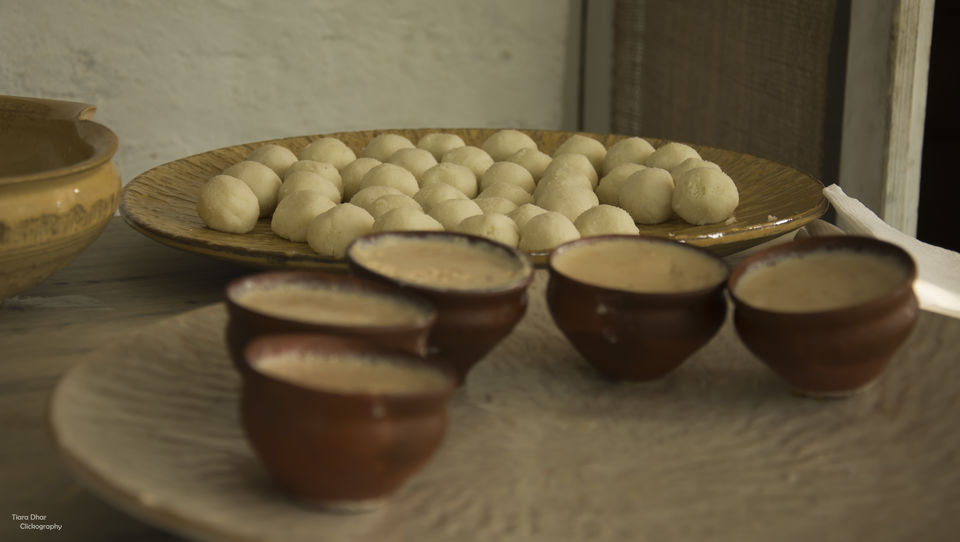 Our first meal at the Rajbari happened to be the lunch on our arrival date. It was a buffet spread of mainly Bengali cuisine, and I must say – food at the Rajbari is definitely a big plus. The manager, Ms. Krishna Ghosh is an amiable lady who took care of every guest personally, taking note of any special request coming in.

The Rajbari at night After a short afternoon siesta, we got ready for the evening Aarti. As the guests gathered and seated around the Thakurdalan, I knew we were in for a memorable evening. The dimmed lights, the priest chanting Slokas, sound of blowing conch, bells ringing and beating dhaaks fill the air with magic that can mesmerise you. Close your eyes and just feel the ambience that the Zamindars of yesteryears might have felt. The rest of the evening was enjoyable with some soulful songs sung by a 3 member music band, followed by a performance by a Latin dance group. We were tempted to join and shake our legs along with them. Soon the place transformed into a dance floor! A little while later, it started to drizzle, so everyone had to disperse. However thanks to the Nancy Drew in me, I still continued to explore the dark alleys, in spite of a sudden power cut that made a group of young visitors go “Boo!!!” Who cares, I turned my mobile flashlight on!! :-D

Later on, the dinner happened to be a buffet spread of Continental cuisine. The foodie in me was elated!

The next morning, I woke up early to get some shots from the terrace of the mansion, and took a walk around the grounds. I met and befriended a young Yoga instructor who visited every weekend for taking classes for visitors. We took selfies when we bumped into each other at the breakfast table.

The ruins of a 300 year old temple 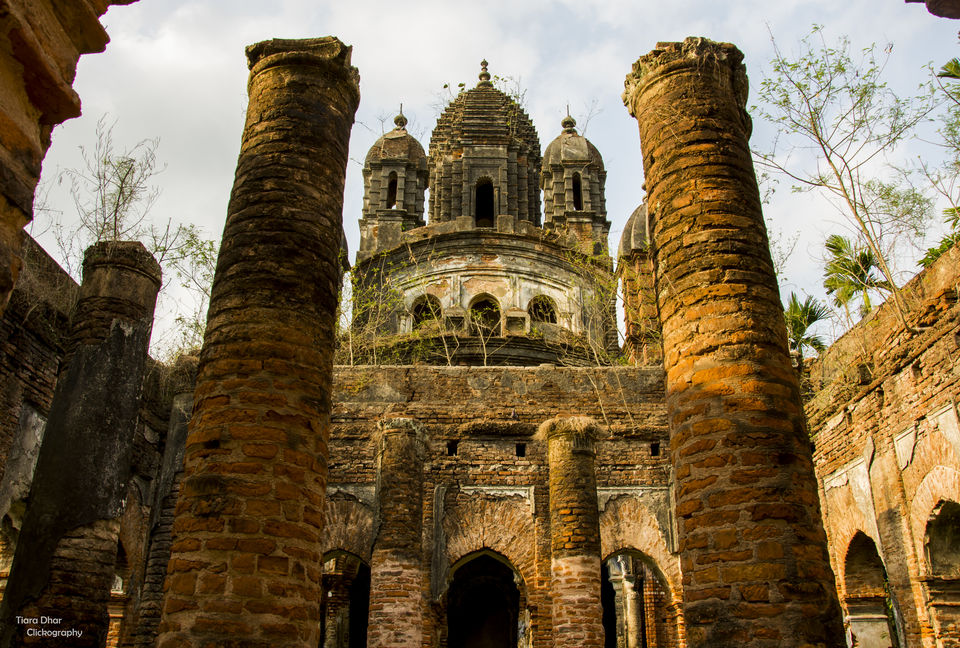 During the day, we went out to visit the ruins of a 300 year old temple right outside the Rajbari, which I found to be a photographer’s delight – just be careful of creepy crawlies though! 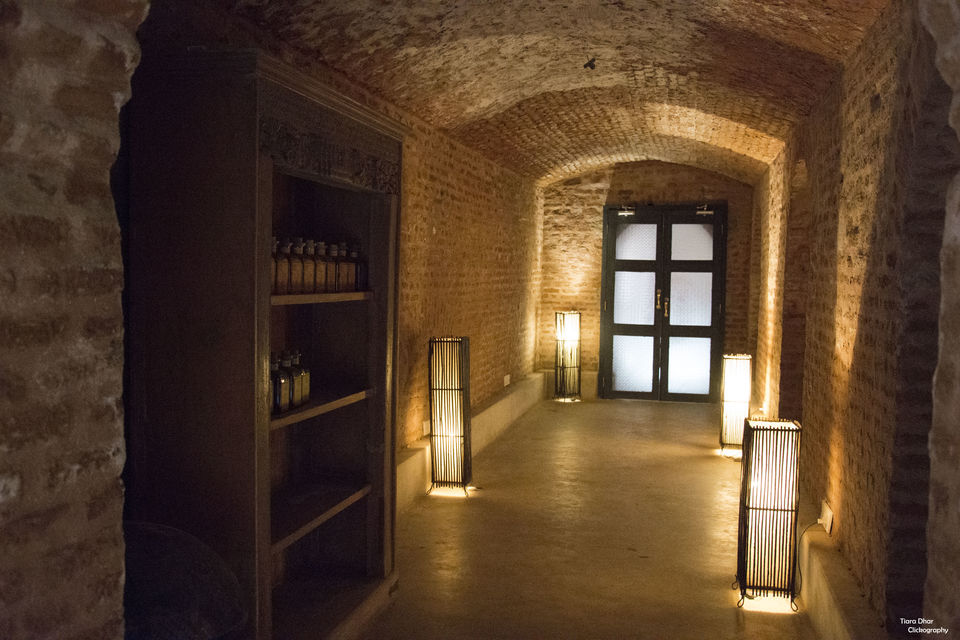 We came back for lunch, took some more pictures and visited the office to clear the bills. Interestingly, the office has been set inside the “Jail Khana” or “The Dungeon” – this was the place where prisoners used to be kept. One look at the size of each cellar was enough to give me the chills.

Soon it was time to leave. With a heavy heart, we drove off. I took back with me the warmth and immense hospitality of the team at the Rajbari, and wonderful memories that are never to fade. The Zamindari is bygone, but The Rajbari Bawali still stands tall to tell the tale of grandeur and glory with the promise of a peaceful sojourn far from the madding crowd.