Mountains in my Blood: Pokhara

Mountains in my Blood: Pokhara

The January of 2014 was the first time, I had a rendezvous with the mighty Himalayas. Even though, I had expected the majestic mountains to be impressive (partly, due to growing up with fair amount of Ruskin Bond stories), I could have never imagined that the Himalayas would exceed my excited speculations at the first sight. And I certainly did not realize that I would form a bond as deep with the Himalayas. My first trip to Pokhara left me so mesmerized with the grandeur of these mountains, I had to keep returning to the Himalayas quite a few times over the years. Perhaps, a part of me thought of it as home. 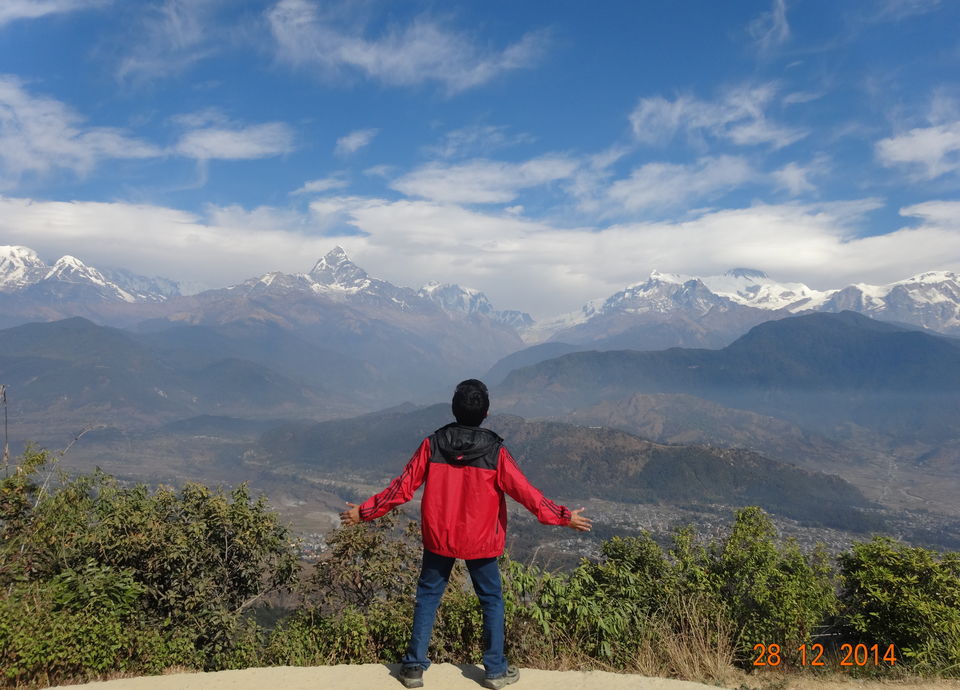 Anyway, there I was, back in Pokhara, a place that won my heart in the first time. The city of Pokhara in Nepal is a banquet of epic proportions- any traveler's delight! The sunrise crowning the visible range of Annapurna of the Himalayas with a golden hue, the pleasant climate of the day, the chill of the night, the mountains proudly making a fascinating wallpaper. These are just some of the features for starters, dear reader. I have not yet mentioned about talking a walk by the Fewa lake, serene even in the hoopla of tourists and jovial activities. The memories of my trip in January tantalized me whenever I closed my eyes and I knew I had to be at Pokhara again. The December of the very same year, I set off with the excitement and eagerness of a young man meeting the woman he fancied, after a prolonged period of waiting.

Boarded the Mithila Express from Howrah to Raxaul. Reached Raxaul the next day, early in the morning. A short tonga ride took us(me and my mother) to Birganj (the border town in Nepal), from where we could board a bus to Pokhara after a 6-7 hour long journey.

The journey from Birganj to Pokhara is a refreshing one, once it passes through Chitwan forest. Mountains, valleys, forests, rivers- the hide-and seek of the sun in between mountains and clouds adds further splendor to the spectacular show unfolding in front of your eyes.

Where I lodged up:

My aunt's bungalow at Pokhara Homes. I must admit, it is an unfair advantage for a tourist. However, the valley has enough hotels and lodges to lodge up in, owing to it being a tourist hot-spot. The lifestyle is bit on the expense side, since tourism is a vital industry of Pokhara (or Nepal, in general).

Anyway, I sipped my morning tea on the terrace, relishing scenes like these: 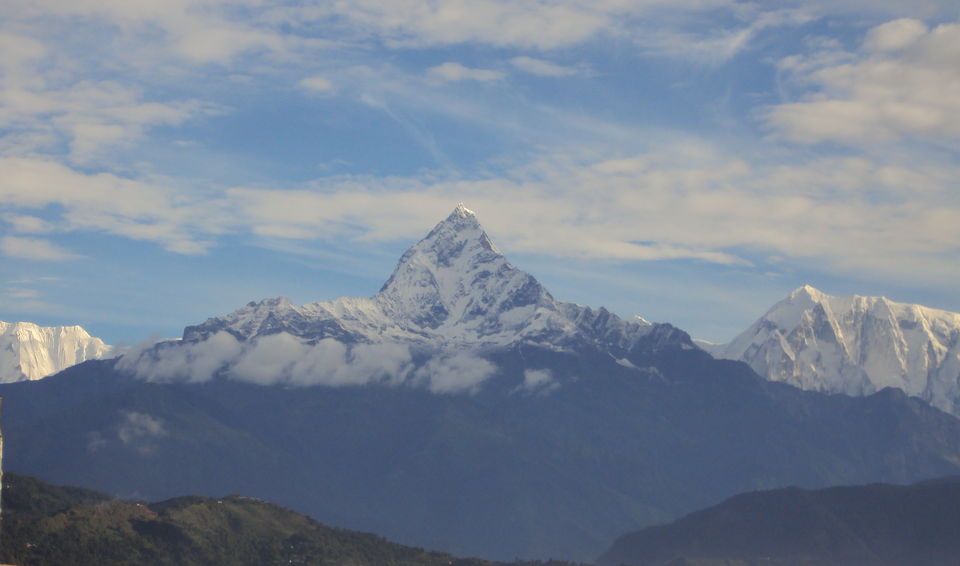 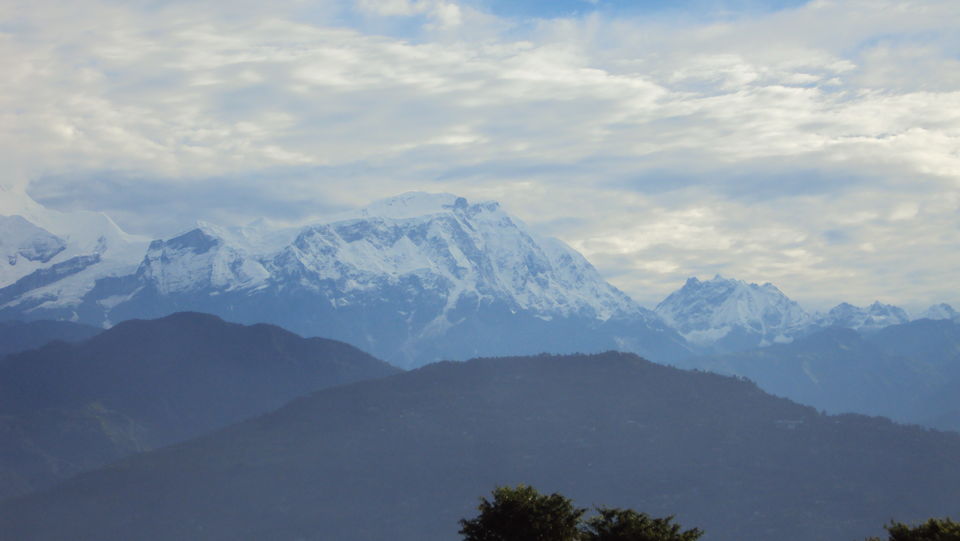 Aren't the views surreal? I wish I could show you the vast panorama in the exact scale, so that you can appreciate it better. I believe, and most of you will agree with me- we can never completely appreciate the grandness of the scenes in photographs. Why? Simply because, we don't have a larger screen and effects than nature does. In the future maybe, but for now the monopoly over stunning landscapes belong to nature.

Imagine, consuming a good book, while having some coffee and Mars bars, often looking up and admiring panoramic scenes of such majestic mountains acting as a gigantic wallpaper, and the clear blue sky a ceiling and some warm sunlight. Well, achieved.

Maybe it's because I have been in the mountains for only short spans of time, but I think there is never a boring moment in the mountains. There is simply so much nature to experience, owing to the mountains resisting human occupation for the larger part of them.
For the majority of my second time trip, I preferred walking. Since I had already visited most of the tourist attractions the previous time, it made sense that I strolled around, discovering more about the place than most guide books could tell. In an attempt to appreciate the subtle beauty in normalcy of the place, I believe, walking around is the best way, followed by cycling. Sadly, my cousin's bicycle wasn't in shape. However, that didn't stop me from loitering around.
I made it a practice to wake up early morning, thanks to my mom and aunt. (They convinced me that even though the weather is comfortable, I had to be treacherous to sleep in order to experience the best of Pokhara. Days in the mountains start earlier and end earlier, as you know.)
And so, as it was, after some breakfast, I set off to some place or other.
Strolling to the backside of the complex, I walked through some humble localities where the road to another which ran parallel to the cliff. Following the road, I was a mute spectator to several activities. One old man was walking accompanied by a pet monkey. Two little children were elated at the sight and soon the jovial little humans approached the old man. The old man exchanged glances and smiled, I flashed back a courteous, acknowledging smile. Walking along, the sight of a group of boys playing football on the field by the road greeted me. Asking one of them for directions where I could get to the brook that ran at the foot of the cliff, I walked on. The snow clad mountain peaks of the Annapurna were prominent, when I looked back at the horizon. Soon I was following a path that moved downhill, with longer strides. Ah! I could now see the brook, the music of whose presence was now more prominent than ever. After climbing down a steep set of stairs cut of the rocks by the hill, I found myself walking over the gravels of sizes small and big, with some qualifying large enough to be rocks. This part was in complete shade of the cliff and cooler, but walking a bit towards the brook, the warmth of the sun was a pleasant welcome. I roamed about the area sometime. it seemed secluded, but I guessed the locals often came here for their chores. The overpowering sound of the rushing brook with the occasional birds humming a tune or two, this was quite a place for writers. I could not help but think if Lord Alfred Tennyson must have been inspired by a similar brook. 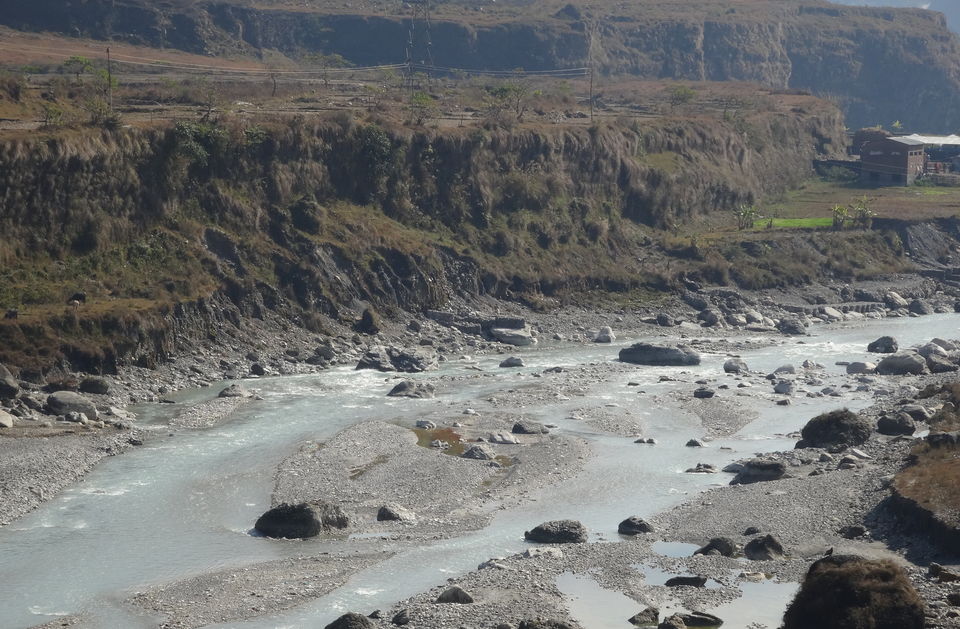 I took my jacket off, made it a pillow. Then I lay down upon a smooth rock, enjoying the warmth of the sun, immersing myself in the serenity of solitude by the brook. It is these little moments that make travelling an inexplicable experience. 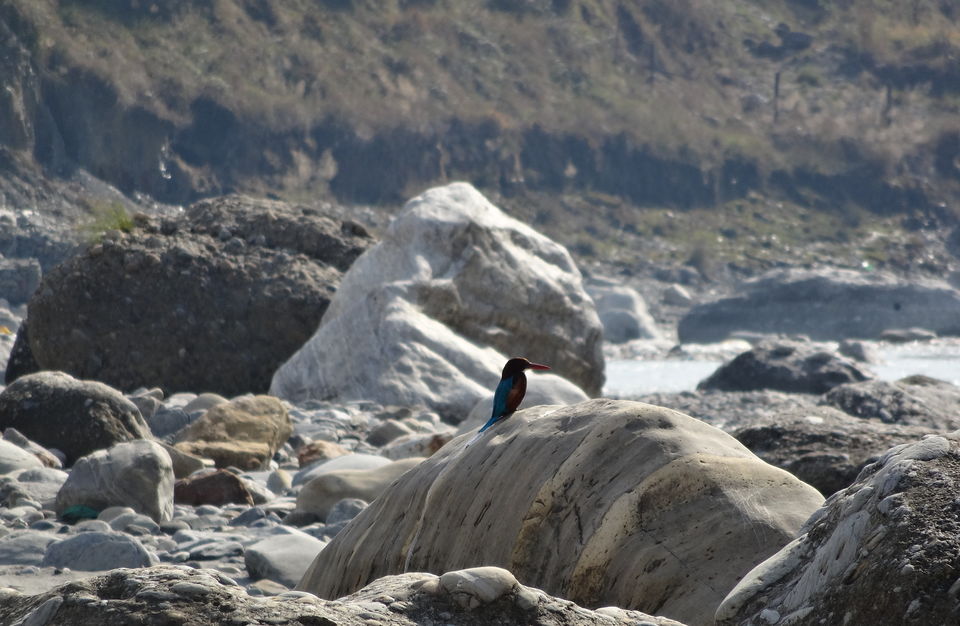 On second thoughts, I was not that alone. See this kingfisher?

Tracing my path back, I reached my aunt's bungalow from where we traveled by car to Sarangkot, an essential view point atop a mountain that would give us a better view of the ranges. And say hello to panorama!

Some stunning views of the Machepuchre (or fishtail) peak along with the Annapurna range lay for all our ravishment.

From there, a short drive took us to Kalkikot, another view point. And here are some glimpses I dare not belittle with my words. 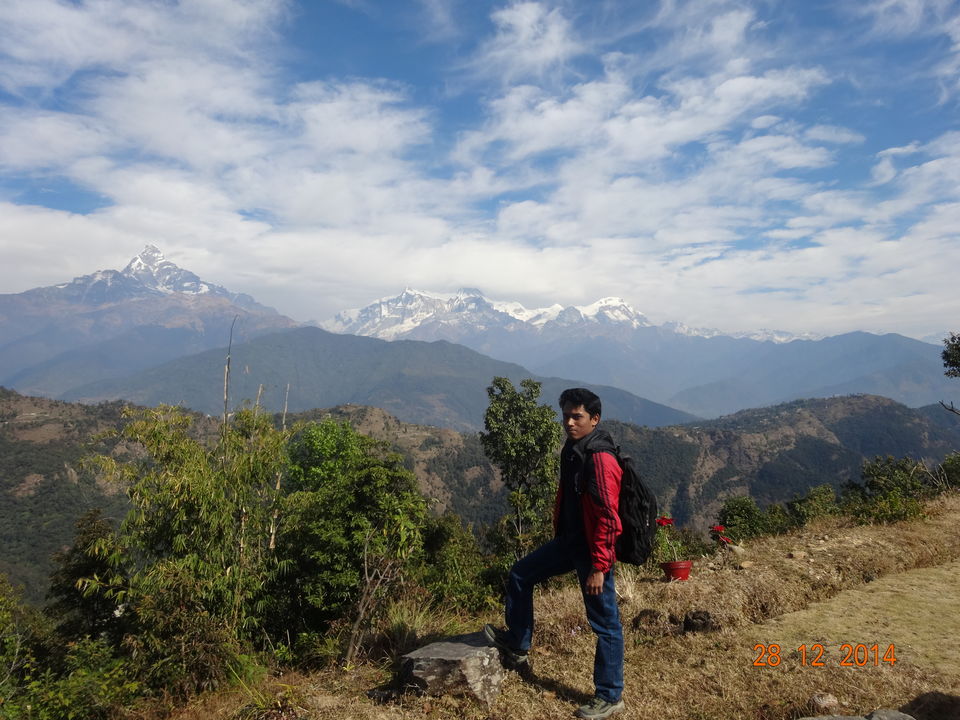 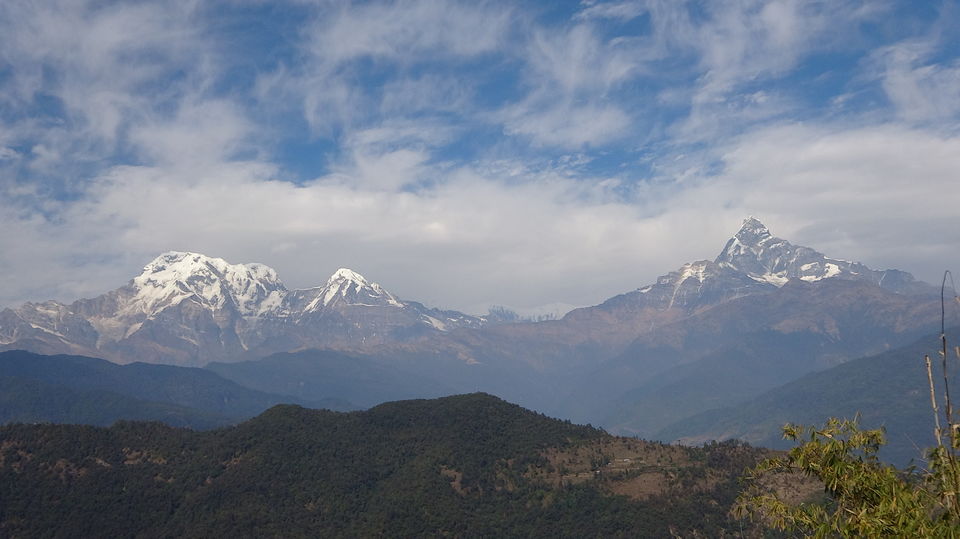 Himalayas seems to surprise on every scale. You just have to observe it. But should I quote,"the closer you look, the less you see!" 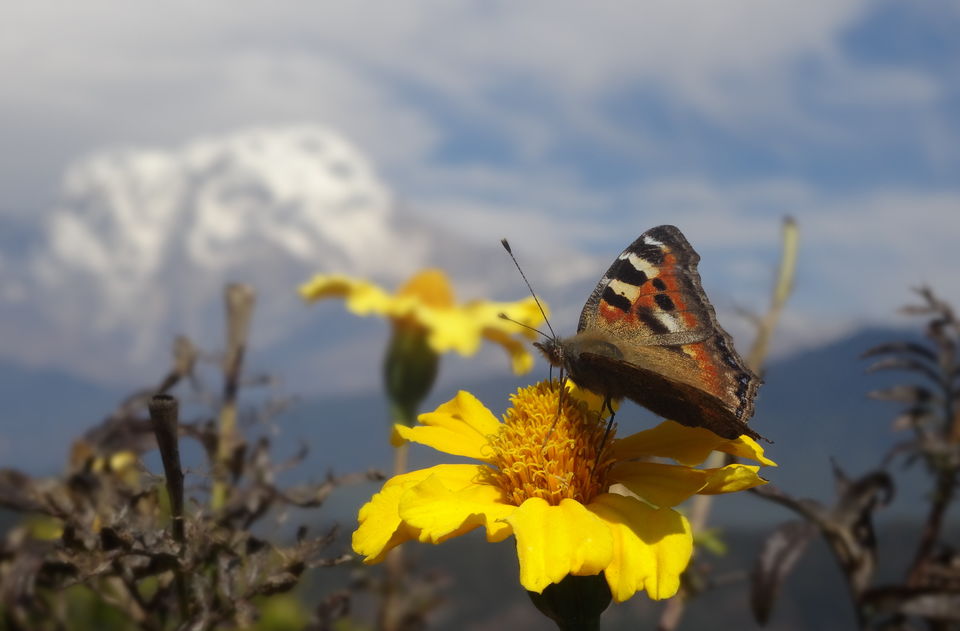 A plethora of paths is what I like about mountains! 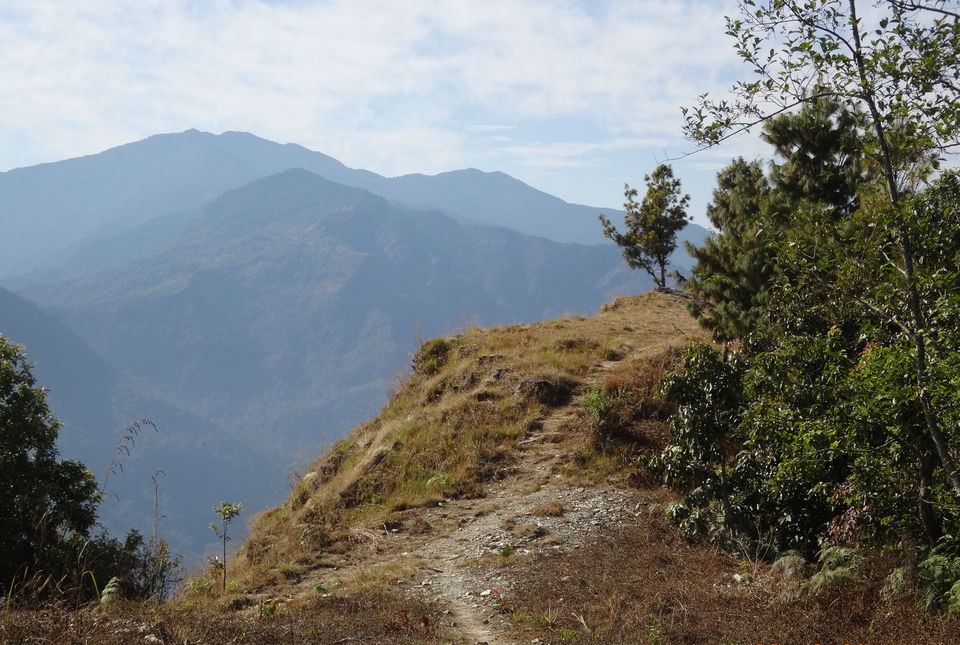 Let me share my attempt of capturing the scenes in a video.

From there we moved on to Fewa Lake. Fewa Lake, as I have already mentioned is a hub of tourists. The ambiance of suited for creativity or leisure- whichever you prefer. People apparently find inspiration in the view of the Annapurna range, clearly reflected on the lake, the positive atmosphere and the wind that breathes freedom. And the mind is bound to flow sans boundaries. So, the banks of Fewa Lake is fairly dotted with poets, writers, artists and musicians- creators of all sorts, along with the regular crowd of picnickers and lovers.

So, if you're looking to relax with some beer, Fewa lake is as tempting as for those who are looking to enjoy some chicken sizzlers at one of the various cafes by it. Or if you want to sit in silence delving in some moments of retrospection, you can find yourself a quiet corner and no one bothers you. 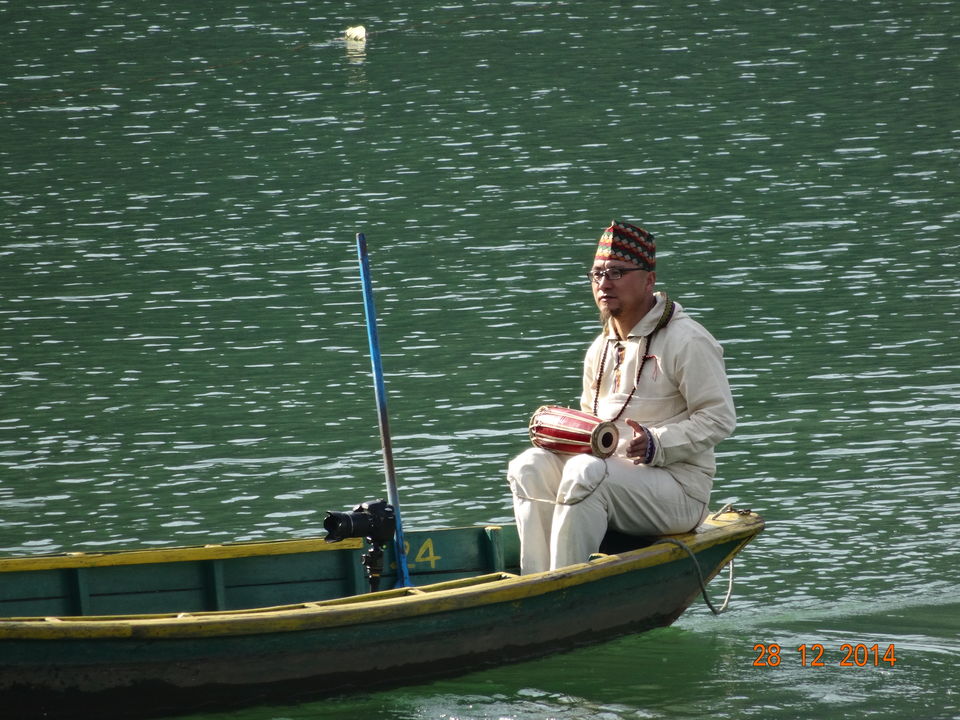 After enjoying some chicken sizzler and pizza at Hightide, we moved on to the Lakeside street which again is a tourist favorite, for its restaurants, bars and shopping arcades, a lot of which sell items varying from ethnic crafts, dresses and trekking equipment. 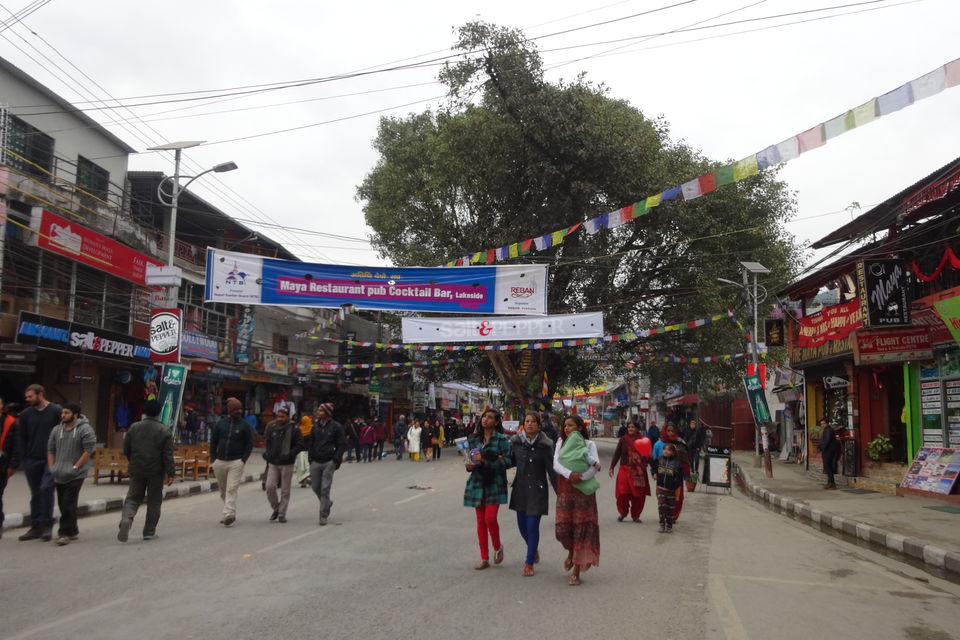 The colorful flags add further vibrancy to the streets. Fashionable people, a leisurely lifestyle, glitzy shops are some things the stretch has to offer. 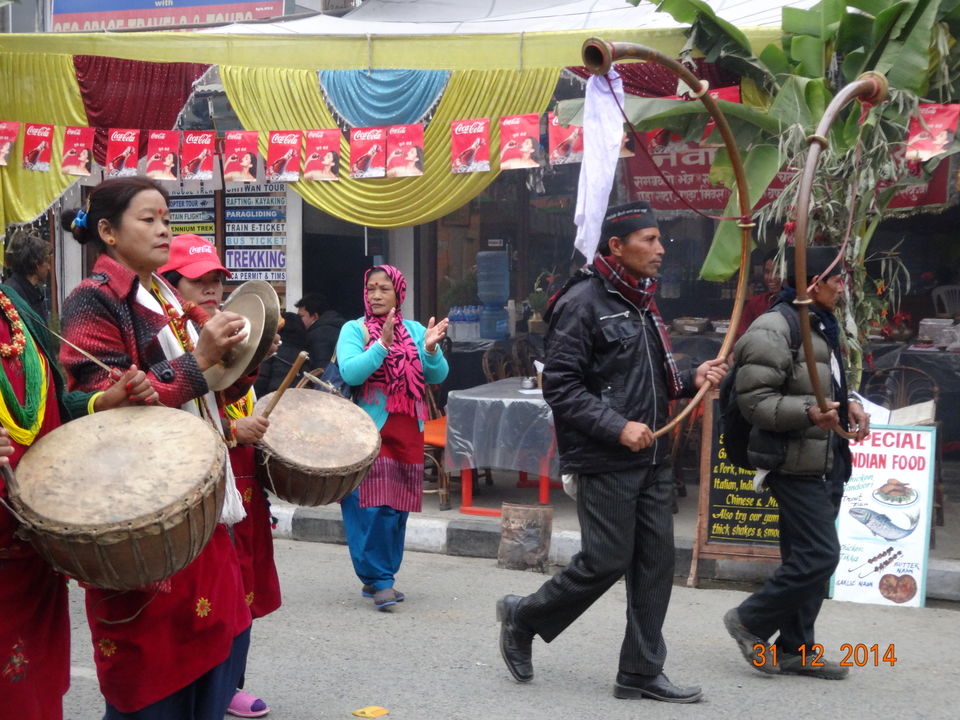 It was the time of the Pokhara street festival, and we witnessed a procession to celebrate the same. Walking along the street is something you'll never tire of.
In the evening, I saw an entire different form of the mountain ranges, enigmatically standing out in the play of the setting sun and clouds. 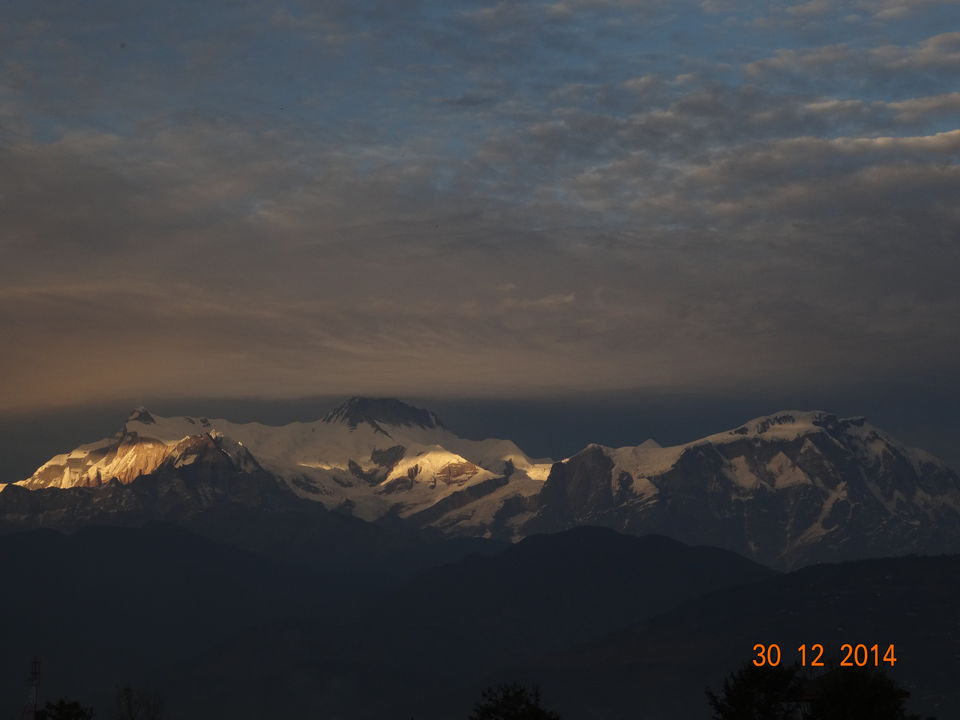 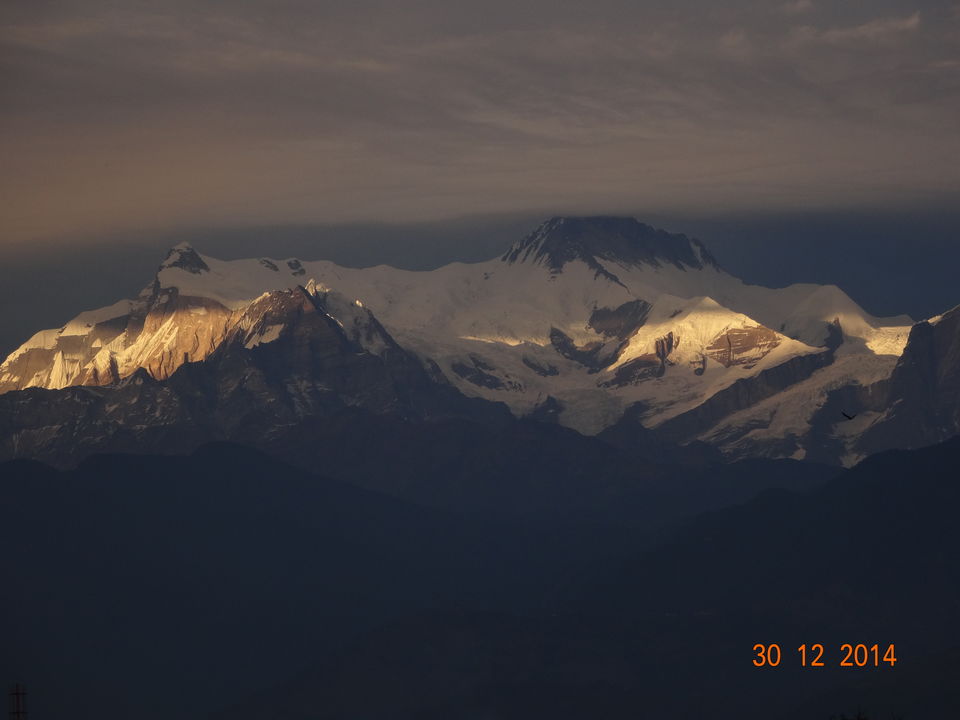 Wait. It gets even better. 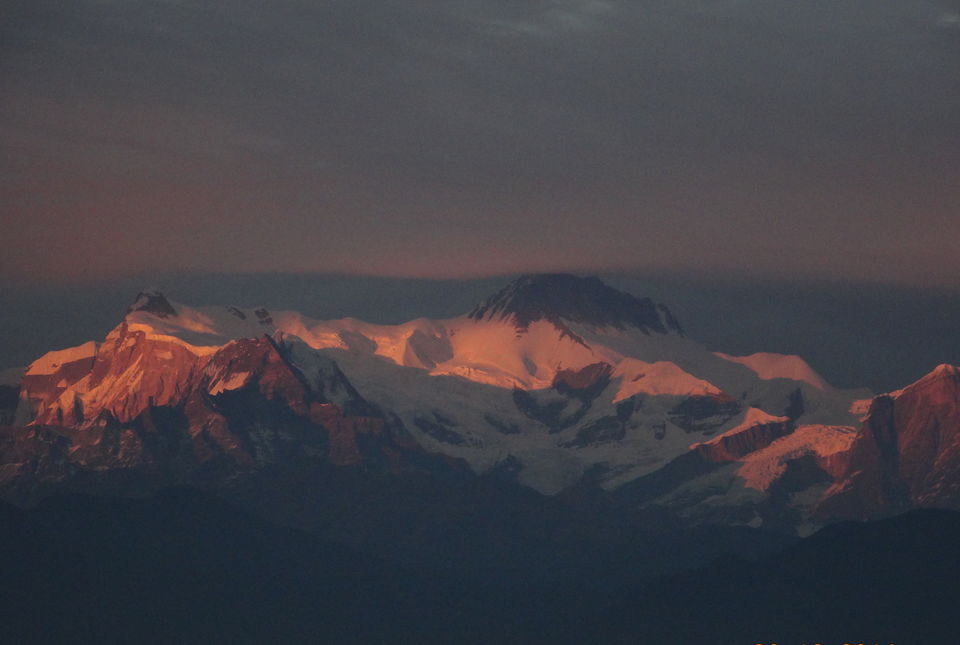 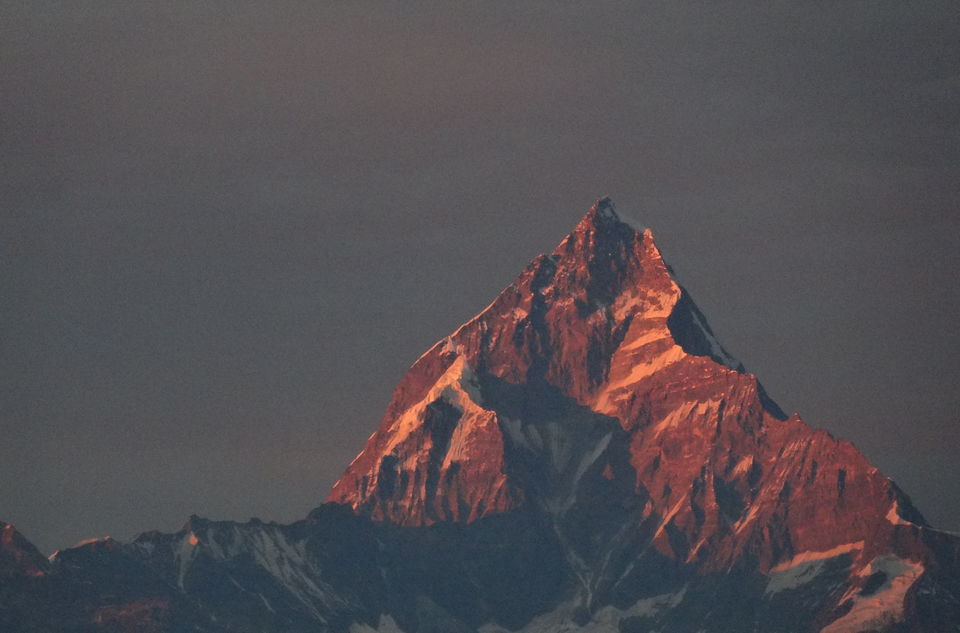 This is just a brief overview of some aspects of Pokhara you can expect. Pokhara is magnanimous in its entirety and rightfully blessed by the Himalayas. Even if I cannot convince you to visit Pokhara, I can tell you why you should not. Because, you want to keep going back there. And while I write this, I am again feeling a longing to be there, relive Pokhara once again. Although, I am pretty much sure, more than once.
I would like to end by quoting an instance from Ruskin Bond's Rain in the Mountains:
"It is the mountains. Once the mountains are in your blood, there is no escape. You have to come back again and again. I don't think I would like to die anywhere else."