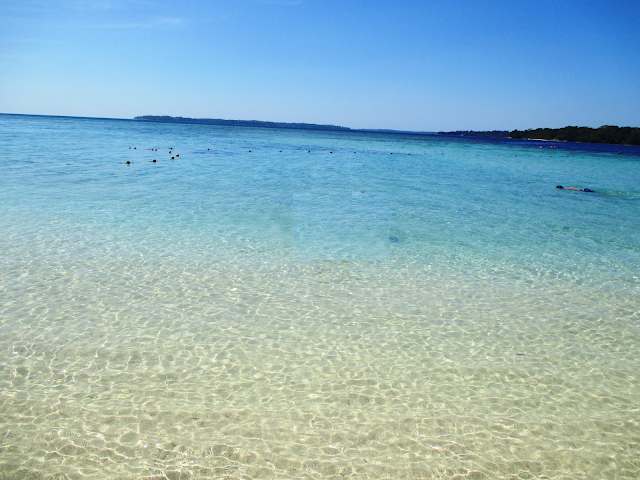 Wherever in search of Google, about the major attractions of Curry Port Blair, it was found that Jolly Boy Island had flown there, meaning it was in the first place. Well assumed it is in the first place and surrounded by water from all sides, but what is this? The answer to this question is that the island is made up of twenty-one kilometers from Port Blair, in the place called Wandur, two hundred and a half decimal five square kilometers, Mahatma Gandhi Marine National Park, which is made up of open sea and fifteen small islands. This is a small island. This park is considered one of the best Marine Parks in the world. This place is considered to be an excursion to see the sea heritage through glass boat and snorkeling. Only two of these fifteen Jolly Boy and Red Skins are opened for tourists in a six-month interval. However, I have heard that Jolie Boy has got more natural heritage than Red Skin, and at the time we were fortunate, this place was open to tourists. There is a need to get a permit from the forest department, which is available from the morning except the Sunday morning and the other day is available from morning 8:30 AM and the permit can be received only on the day of going for which you must have a valid identity card, Otherwise it will not be found. Its price is fifty rupees per person. Then at 9 pm, Vador is fitted with the jetty and comes back at 3 o'clock, all the boats leave simultaneously, so it is mandatory to reach here at 8:30 am, one main thing and that any type here It is prohibited to carry plastic, if something is required to be taken, then the security deposit of Rs. 100 per bag has to be collected and the money is taken from the forest department by taking some money for drinking water. The people give bottles of Milton that have to fill the water taken by them and the money is returned upon returning the bottle, although some of the money is removed from this facility, but it is necessary to maintain a good place. There is also this natural heritage that will become a victim of pollution, and leaving plastic in the water will prove to be harmful to the aquatic creatures.Now see all these precautions. Keep in mind these questions then arise, that being so protective of the place where the end she must be in view. Clearly clean blue water and white sand, along with greenery, is a very attractive place altogether-

To get Jolly Boy, we made a great breakfast from the hotel and reached the Jetty located in Vadur, eight in the morning, there was a long line for permits and tickets but our job was made easier by the taxi driver. There was a glass boat trip free of rupees eight hundred rupees per ticket, and whatever else to look for was to go and pay for it. The time for boarding was also done and we were seated in a boat. After sitting, it was announced in the boat that everyone would be able to bundle their safety belt, and the boat's name was ML. Rashmita was also written and that we had to remember as we could only come back to that boat and any person who had to do any activity in the island was to be done by these people and any other boat passengers with any finger attached Could not have been. Taking joy of blue green for nearly an hour, we reached Jolly Boy Island, and on the front we could not even go there on the white sea sand, green trees and beautiful clean blue white white sea, because this After the boat, we were getting a new boat which was a glass bottom, meaning there was a glass on its lower end and it had a magnified lens at the bottom, so that people sitting in the boat could relax Lie, sepia and aquatic estates can be seen. Some such scenes have come from Wandur to Jolly Boy,