A trip to blue paradise: A day in Neil Island & return to Port Blair

Neil Islands may not be in anybody's itinerary intially while planning for a holiday in Andamans. But believe us, this tiny island deserves its own share of appreciation like any other popular island in the Andamans. The place is scenic, enchanting and serene enough to satisfy mind, body and soul of any traveller, tourist or a family on a hoilday.....

So come to this beautiful island, and we are sure it won't disappoint you...

As we sailed on the Coastal Cruise ship from Havelock Island on 15/12/2014, the scenic memories of the blue & pristine beaches kept on resonating in our minds. We had a feeling of an ultimate bliss at that time, but we never knew what more beautiful & exciting was kept in store for us in Neil Island, untill the next day i.e, on 16/12/2014. We docked after sailing for 45 mins. in Neil Island. It was about 4 in the afternoon, but this tiny island being on the far east of the Indian territory, Sun was fast setting down on the westen horizon. So we hurridly set off to our pre-booked resort located near to the Lakshmapur Beach, the Pearl Park Beach Resort (booked through makemytrip.com), so that we don't miss the splendid sun set in the Bay of Bengal. Unfortunately, after checking in to the resort, by the time we got ready and reached the spot just in the backyard of the resort, we were disappointed to find the western horizon completely covered by clouds and the Sun was hardly visible through those clouds. So, we had to satisfy ourselves with our personal photoshoot in the beach with the reddish western horizon as the backdrop. Even after nightfall, we preferred to stay there in the beach to spend some quiet time between us. After an hour or so, we finished up our dinner and hit the bed by 10pm. The next day, we woke up early and in casual attire, we went for a stroll in the beach nearby to enjoy the scenery early morning. The sea water appeared normal but the moment sun rays illuminated the beach, the water started to turn blue gradually and soon it turned turquoise. The sand was as usual white. We captured some of the scenic moments there and returned to our resorts after nearly 2 hours. Post breakfast we hired an autorickshaw, who readily agreed to take us a full day sightseeing in the island after some bargaining (courtesy : my dear wifey). The first place to visit is the very popular 'Howrah Bridge', as called locally by the dominant Bengali population settled here since many generations. It is actually a natural rock formation that resembles a bridge and is quite prominent once the tides recede overnight. Due to high tides in the night and its withdrawl in the day time, sea waves leave behind countless pools of clear water in the rocky beaches of Laxmanpur wherein variety of colourful marine life like star fish, sea cucumber, corals, sea horses etc., can be seen. It was truly a fabulous experience. We walked for nearly 200 mtrs on the rocky beach to reach the local 'Howrah Bridge' which was really a wonderful rock formation. There were other beautiful and intricate features around, which Mother Nature had made over millions of years. We had long hours of photo session there, and thereafter, moved to our next site in the island. 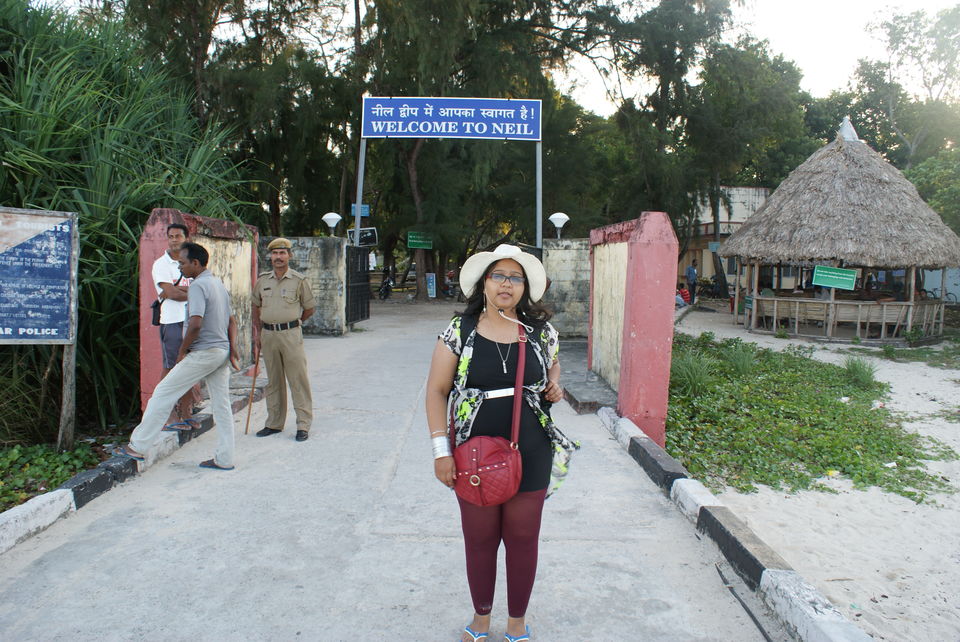 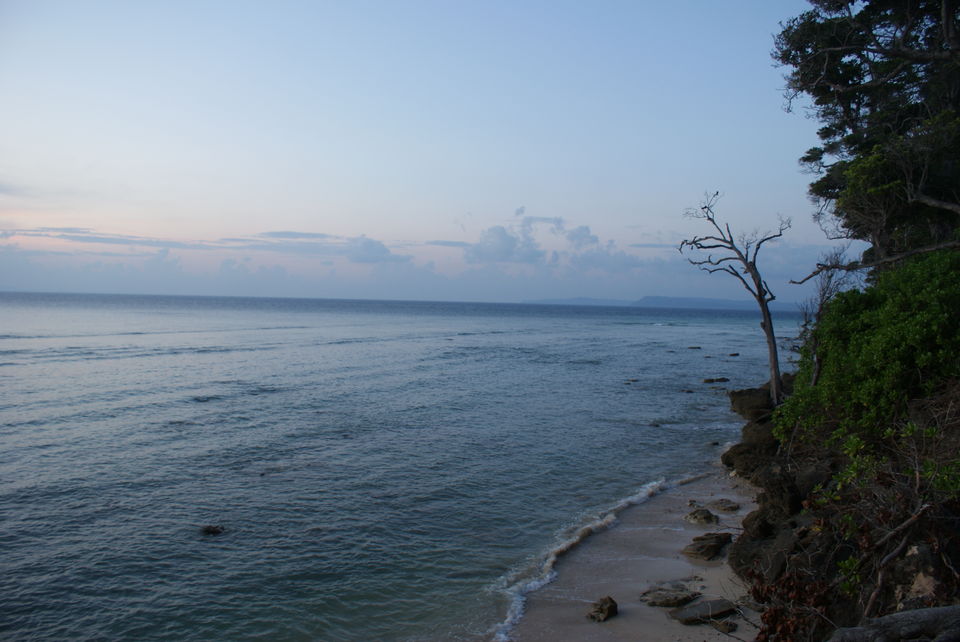 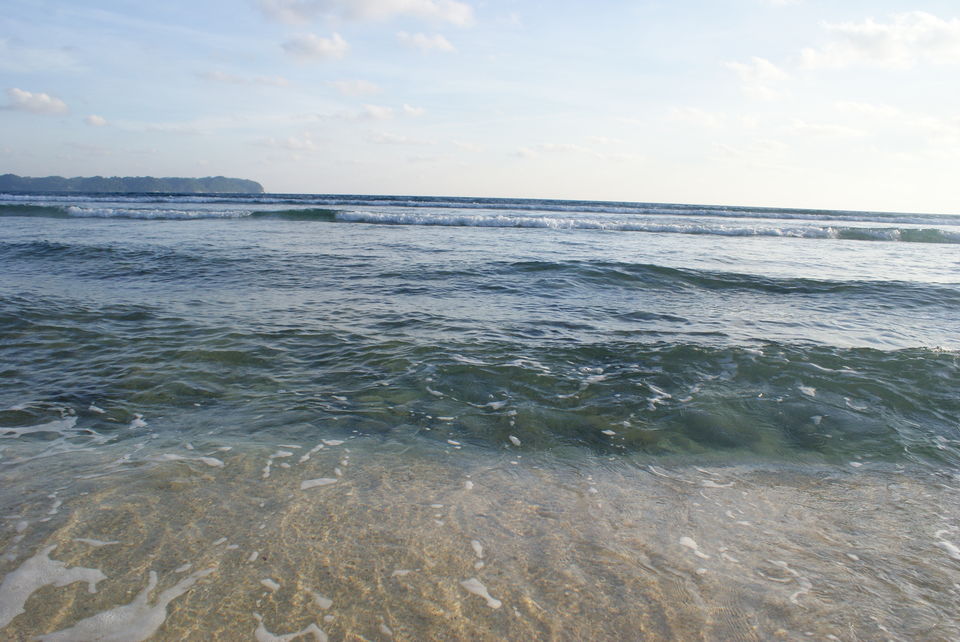 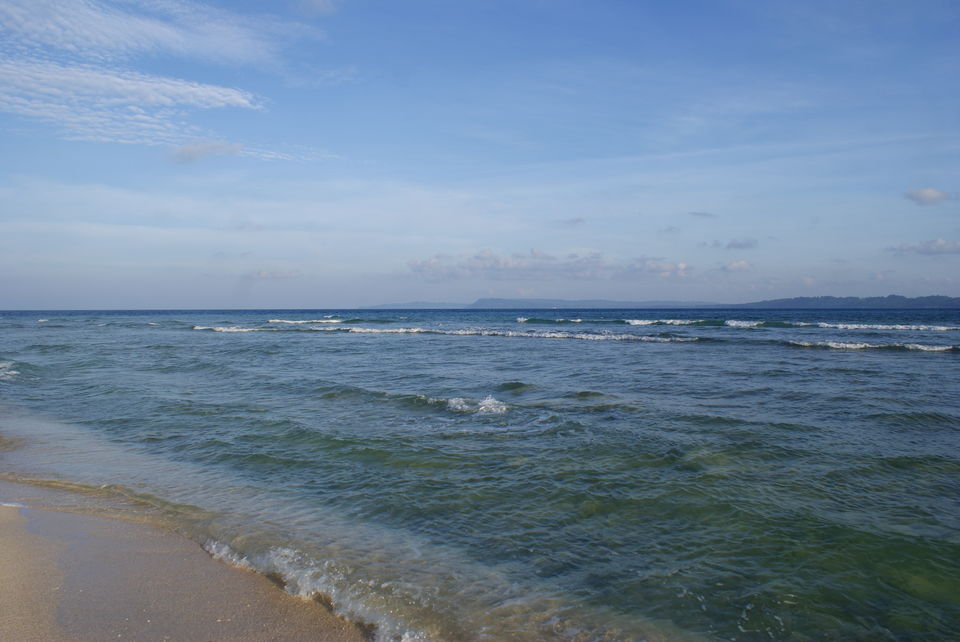 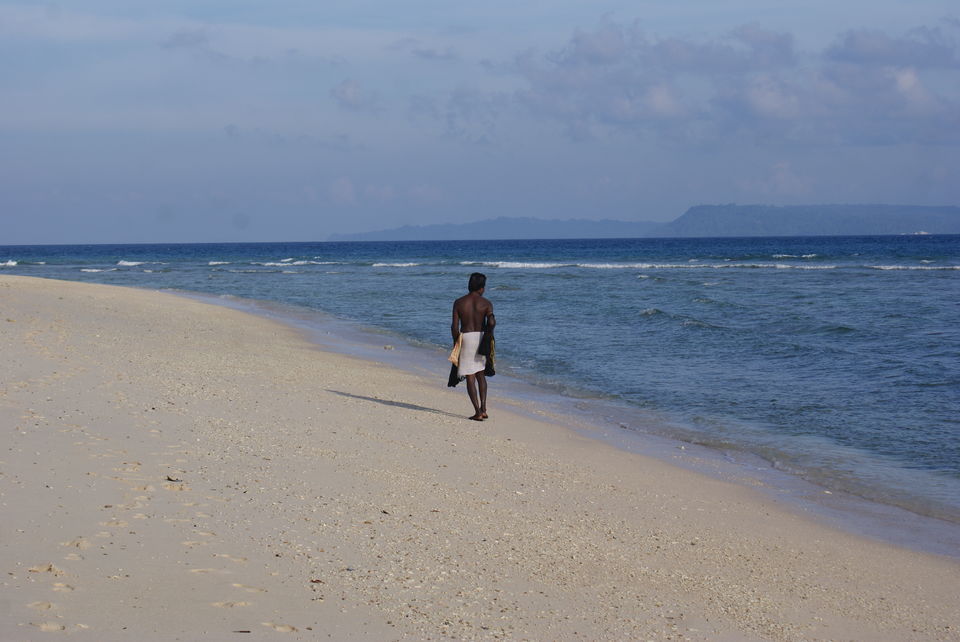 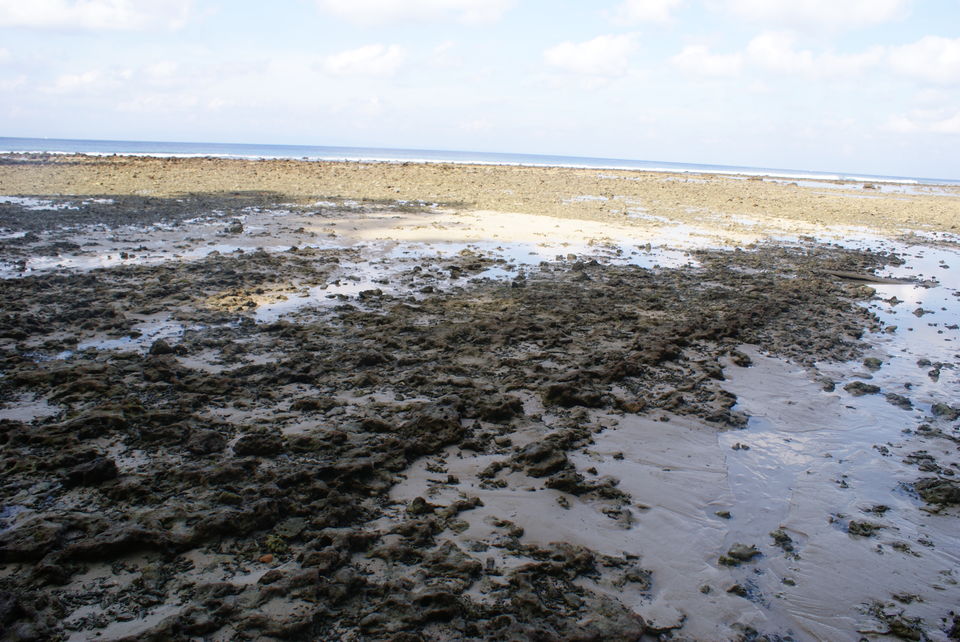 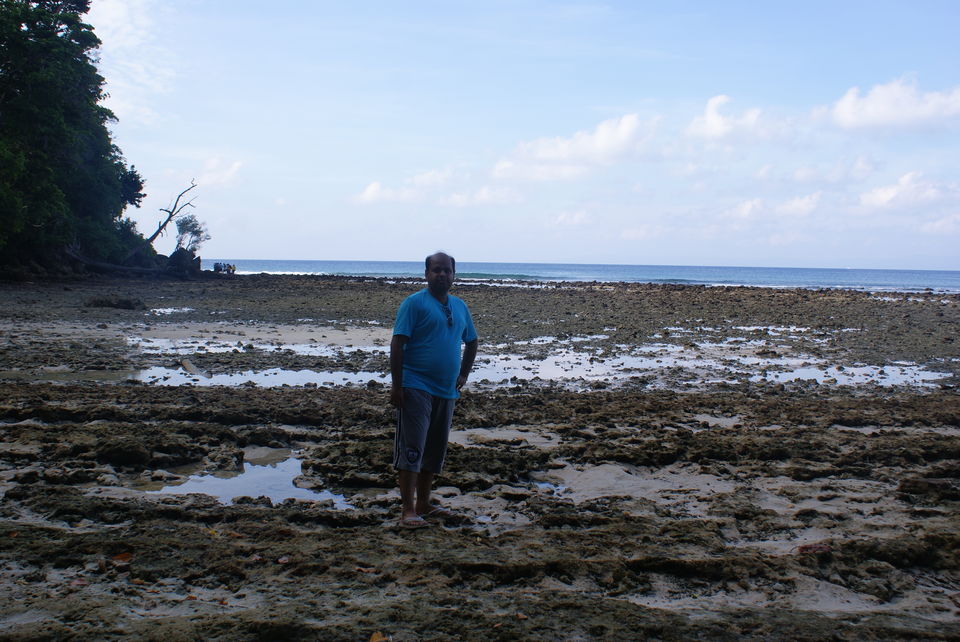 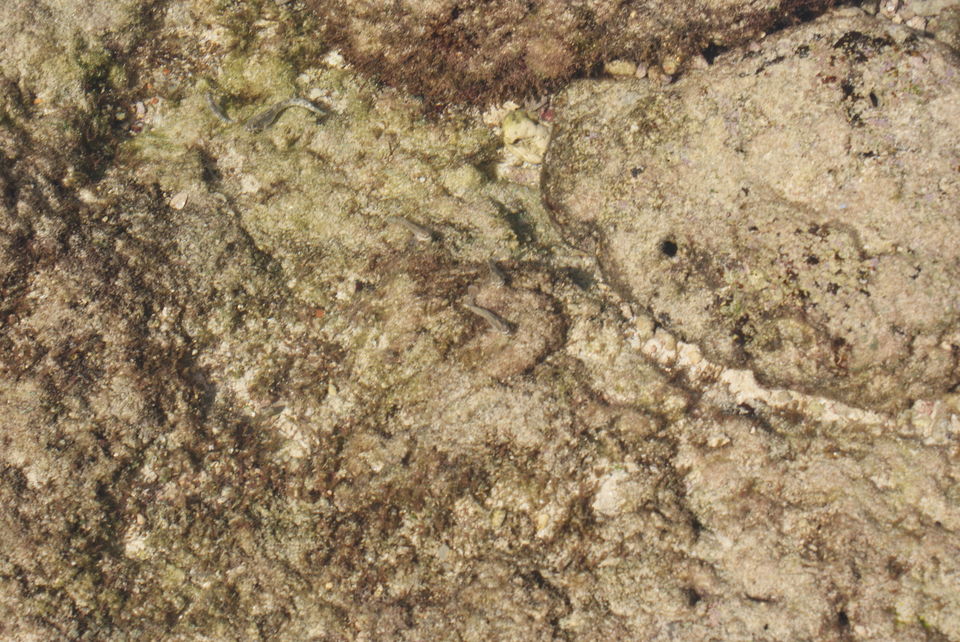 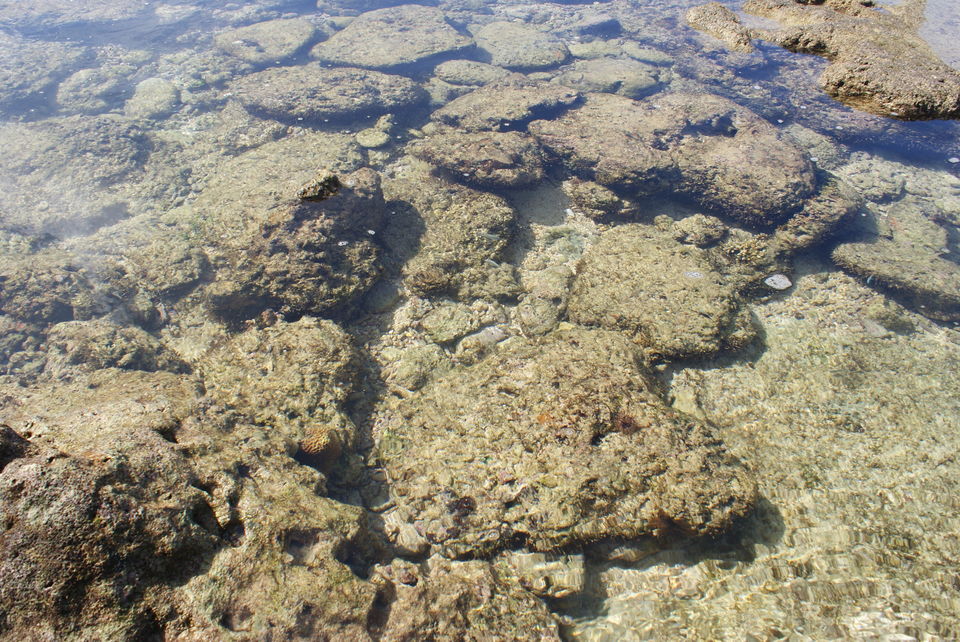 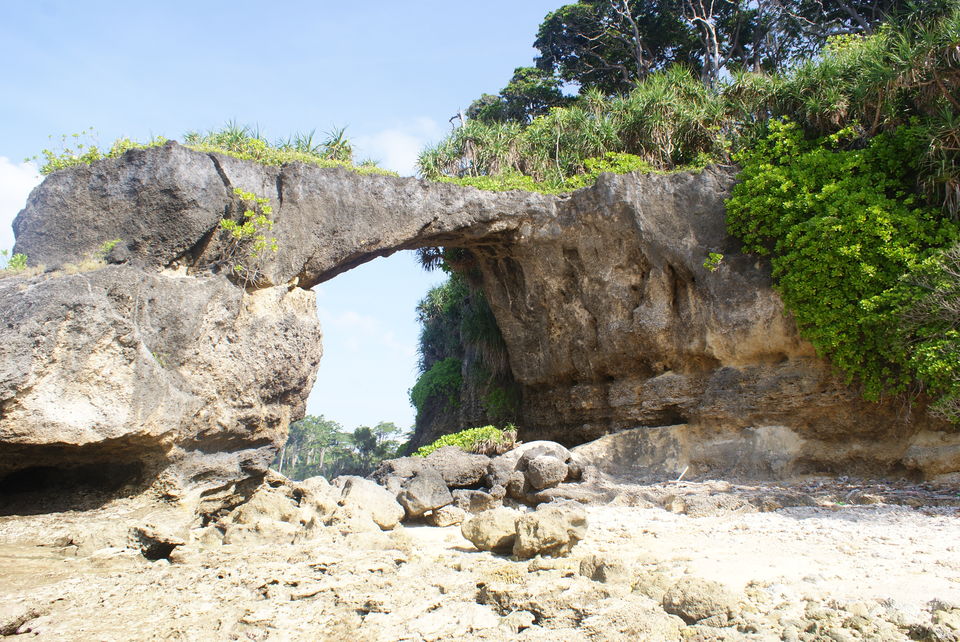 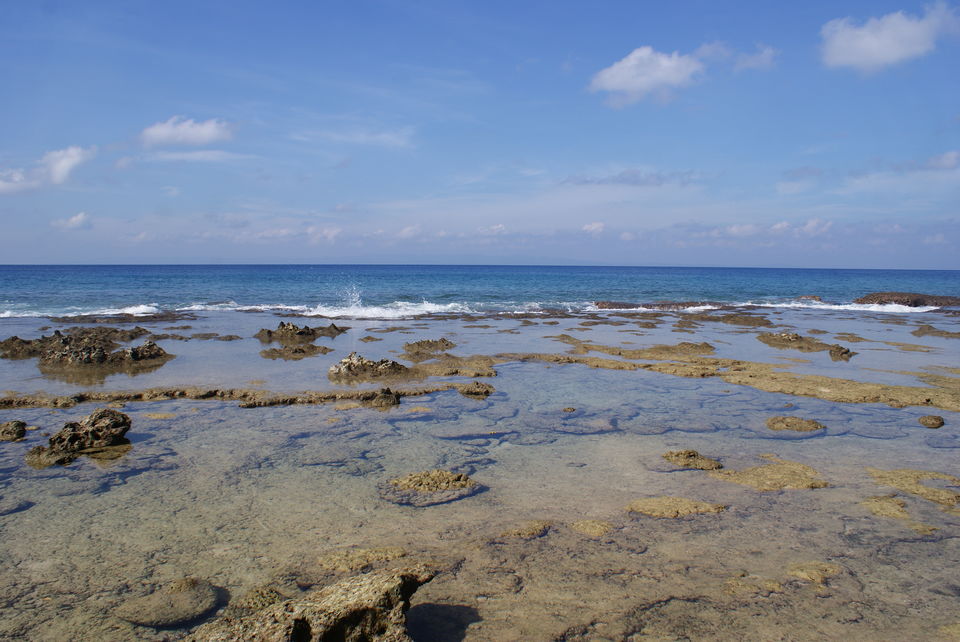 Bharatpur Beach, in my opinion, is the most beautiful beach of all in Neil Island but at the same time, it is also the most crowded of all. However, the beach has so far remained clean and scenic with limitless expanse of blue turquoise waters all around and silver white sand, which attracts thousands of tourists every day during peak seasons. Bharatpur beach is famous for it's crystal clear shallow waters which makes it an ideal destination for snorkeling, scuba diving, glass bottom boat ride (to see the rich & colourful coral without diving into the waters) etc. Thus, my wife went for the snorkeling in middle of the sea in presence of the experts, while I preferred to remain on the boat to videograph her adventure. We also went for a 30-45 mins long glass bottom boat ride deep into the sea. Propospective travelers/tourists may note that there are enough changing rooms available at the Bharatpur Beach both for gents and ladies. After changing over to dry clothes, we went on a shopping spree from the rows of street vendors on the beach selling different kinds of jewellery items & decorative pieces made out of sea shells, conch etc. We were terribly hungry after bag full of shopping, but not before my wifey made use of her bargaining skill to the best ! Neal Island doesnot have any luxury resturants but does have descent & economical eateries, mostly with asbestos/thatched roofs. We had a fish & vegetarian meal at one of those located just besides the Bharatpur Beach. 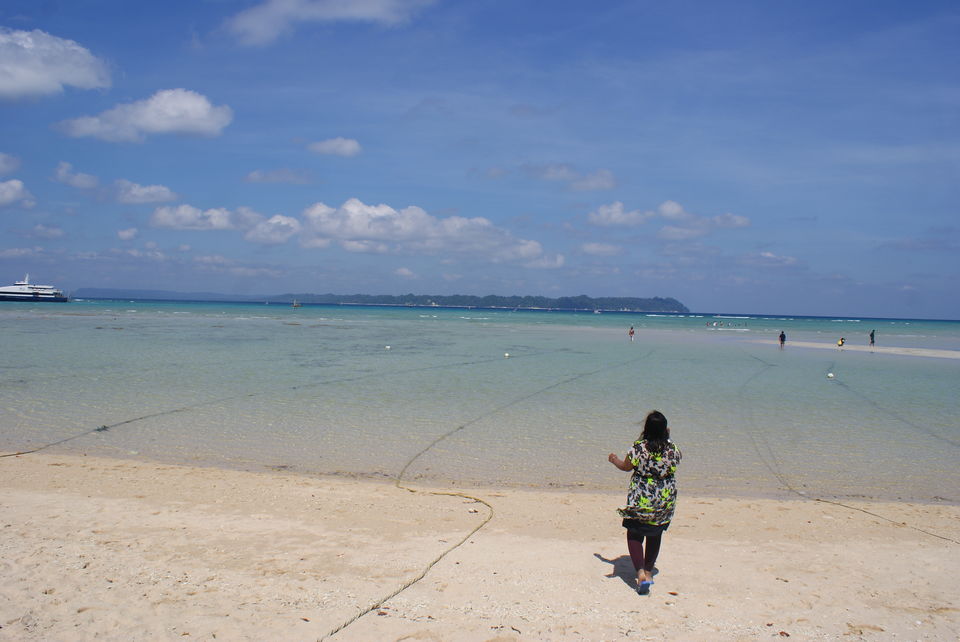 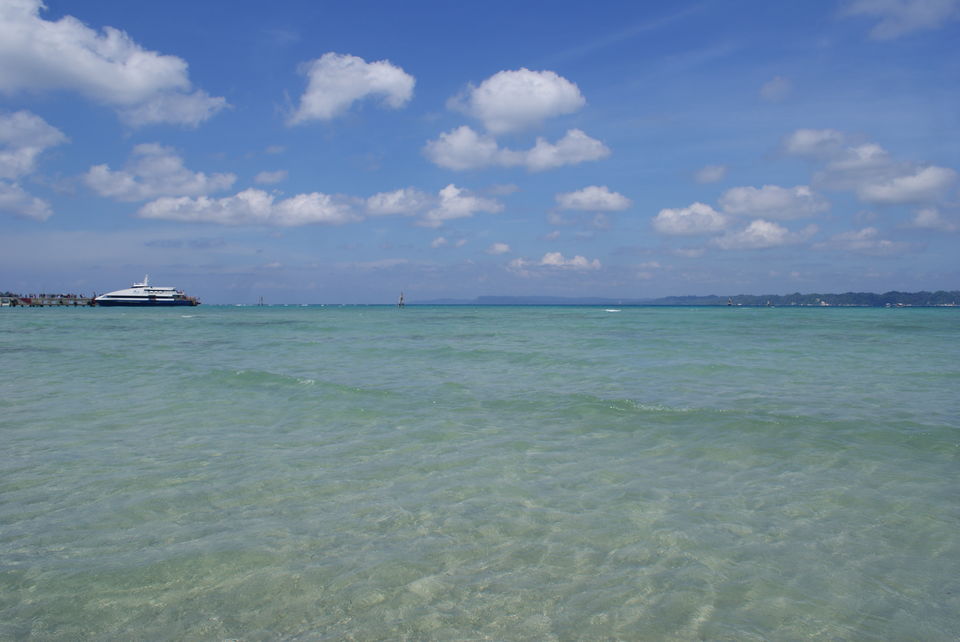 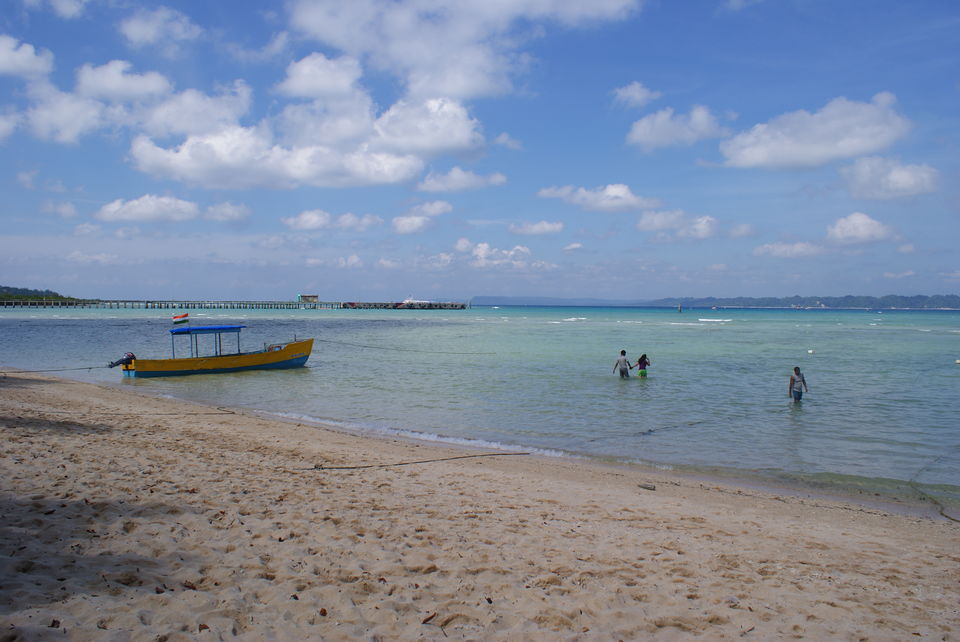 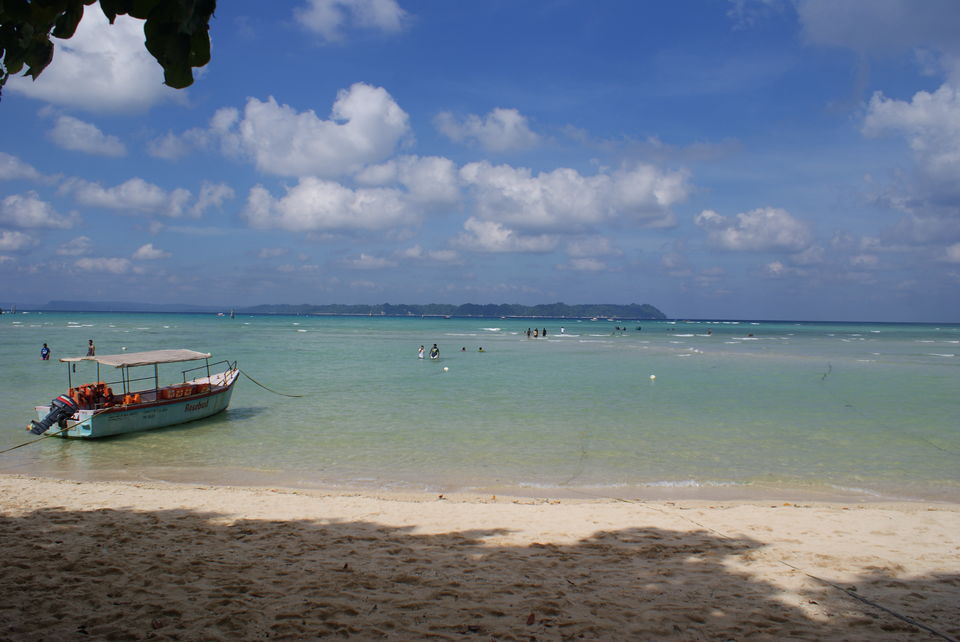 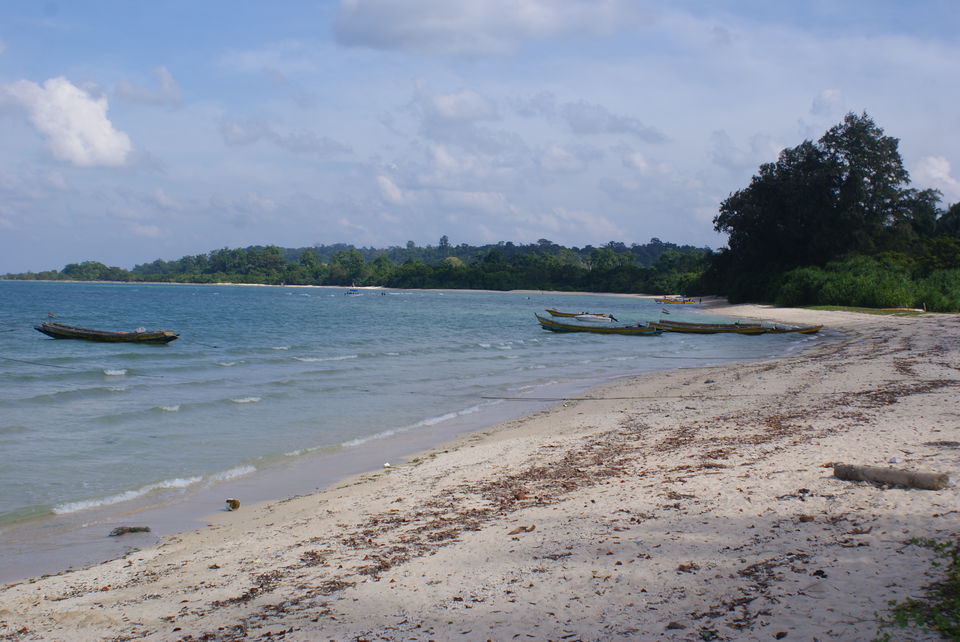 After a hefty lunch, we headed to the lesser known Sitapur beach, upon the recommendation of our autorickshaw fellow. The beach, as expected, was mostly deserted with only two or three tourists or may be locals strolling around at the time when we reached there. The water here too was blue and turquoise but not as much as in Bharatpur. Anyways, we spent some one hour or so strolling along the beach. Finally, time came to bid adieu to Neil Island. We boarded the Coastal Cruise ship at about 4:30 pm from Neil Island Jetty to Port Blair. 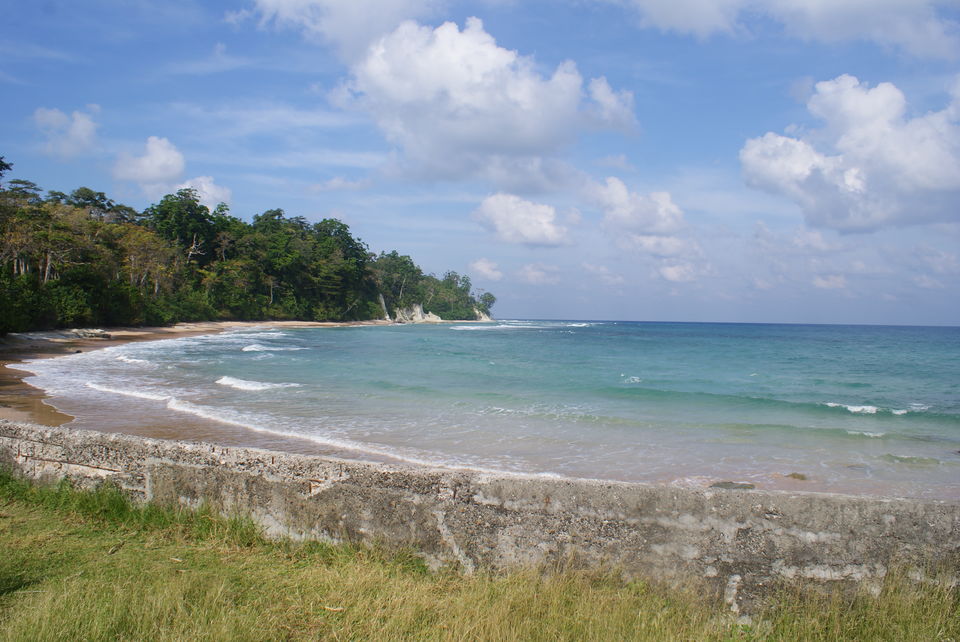 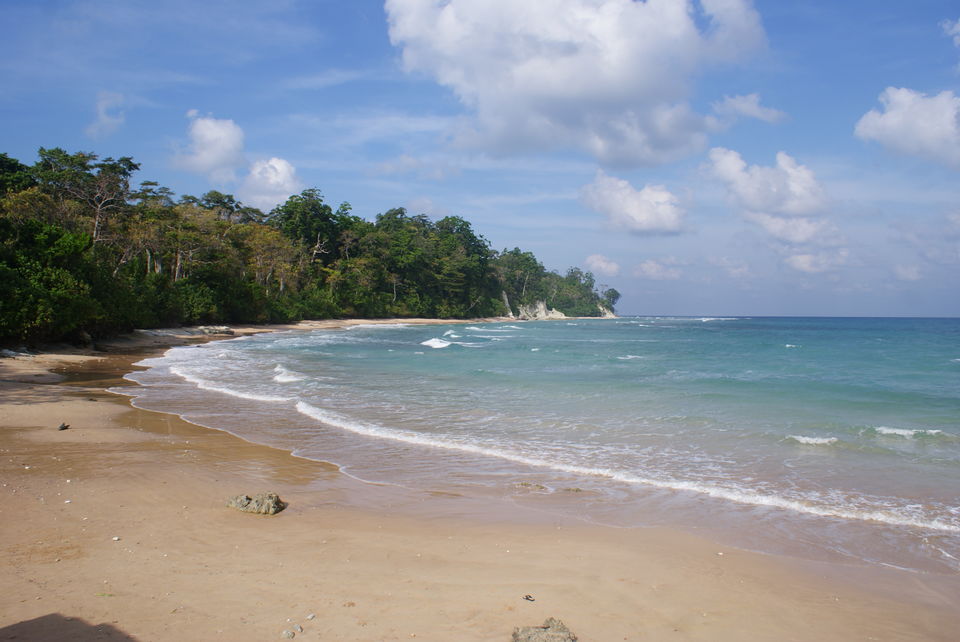 While returning to the Port Blair, we decided for our next destination in Andamans , the Jolly Buoy Island for which my dear readers have to wait for my next blog.....Till then, keep traveling !!!