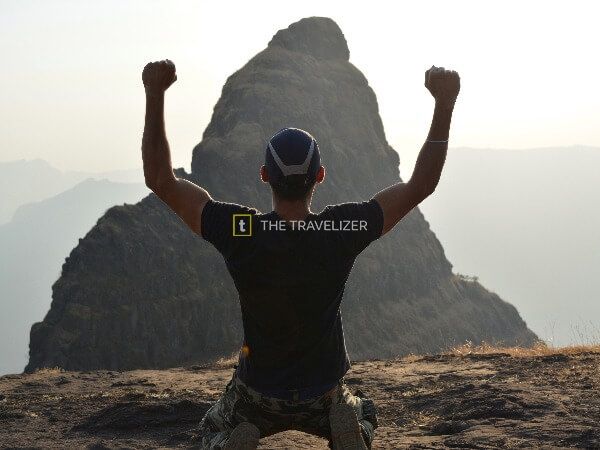 Located in the Mahad Taluka of Raigad district, Lingana is a massive pinnacle between Raigad and Torna forts. It is 2,969 ft high with an ascent of four miles. The first king of the Maratha Empire, Chhatrapati Shivaji Maharaj built  this fort after defeating Chandrarao More, a feudatory of the Sultan of Bijapur.

The fort got its name from its shape which is like a “Linga”. Due to its impregnability, Lingana Fort was used to keep prisonersunder the Maratha reign. During 19th century, The British destroyed the rock cut steps and made the fort inaccessible. It remained unclimbed till late 1970s when a group of trekkers made a successful summit to this fort. More recently a Pune based trekker, Anil Wagh made an unbelievable solo summit of this pinnacle in mere 22 minutes.

So I had booked this trek with Wild Trek Adventure, a trek operator group from Pune. They have a niche in organizing offbeat treks across the Sahyadri range. The cost for this trek was Rs. 2,700 which included:

- Breakfast (Kandepohe) and lunch (typically theplas and pickle) on day 2,

Since the trek was supposed to start from Swargate in Pune, we arrived in the city in the morning by 12127 Mumbai CSMT – Pune Intercity SF Express. There were about 20 participants and the WTA team consisted of 6-7 members for this trek. It took our Tempo Traveller mini bus about 3 hours to reach the base village Velhe, some 50 kms away from Pune. The approach road to the village was very treacherous. From there, we followed a trail for an hour to reach Mohari village. The WTA team had already set up our tents near Railing/ Rayling plateau, also called as Lingana Machi. We started from Pune at 12 noon and reached the campsite at around 4 pm.

Our trek leader, Prasad asked everyone to claim the tents and get ready to go on the plateau. After a walk of 10-15 minutes, we reached the plateau and were enthralled to see the sight in front of us. Surrounded by the daunting hills of Sahyadri, you witness the mighty Lingana fort standing tall with pride in front of Rayling plateau. The sheer enormity of the pinnacle leaves you spellbound. Watching the sunset having Lingana and Raigad (in the backdrop) was the highlight of that day.

After spending an hour on the plateau, we returned to our tents for a briefing session by Prasad. He explained everyone about the Do’s and Don’ts for this trek along with a quick training on how to use equipments like the harness, Carabiner, Descender, etc. After having the delicious veg biryani cooked by Yogita and Pooja from WTA team, everyone started preparing their daypack for the trek day. We were asked to carry minimum 2 liters of water as it was expected to be a hot day. It was also due to the fact that there isn’t even a single tree on Lingana fort, making you totally exposed to the scorching heat.

Way to Rayling plateau from Mahad side 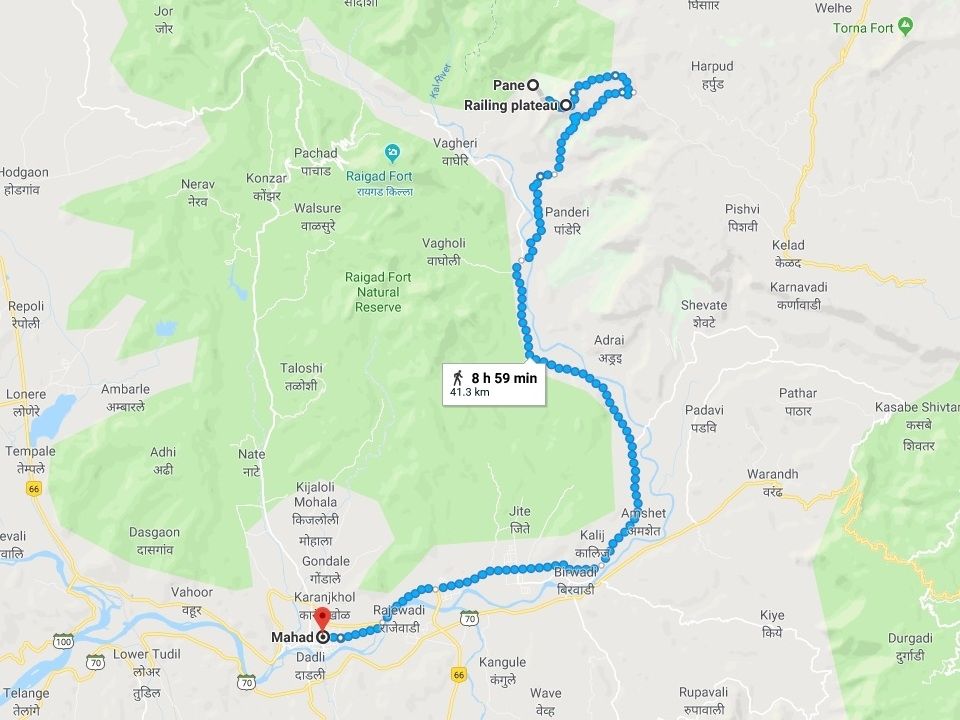 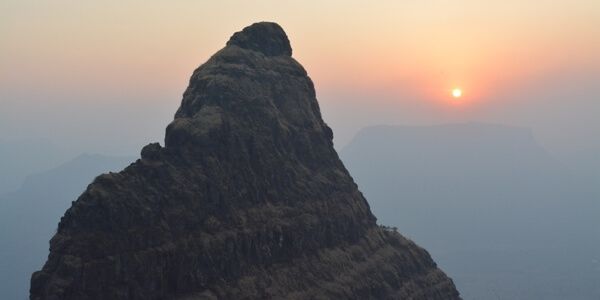 The Day 2 actually began at 3 am when Prasad woke everyone up from their deep sleep. After having Kandepohe for breakfast, all the participants were readied by the WTA team with harnesses. Every participant was given a carabiner and a descender each. There were four members from the WTA team to guide us to the summit.

After leaving from the camp at around 3:45 am, we reached our first difficult patch. Just few meters away from our camp, there was a col adjacent to the Rayling plateau. Called as “Boratyachi Naal”, the col is the starting point of the Lingana trek. To be able to reach the base of the fort, one has to descend this col. Although its just a kilometer long stretch, what makes it difficult are the loose boulders and the fact that you have to climb down this patch in dark.

A headlamp is mandatory for this trek, particularly for this patch. All participants were instructed to climb down in a single line with safe distance from the next person, to avoid any mishap. I was accompanied to this trek by Pallavi and Bharat, my college mates. Since Pallavi was experiencing something like this for the first time, she was taking every step cautiously. After climbing down half the distance, she decided to call it quits (due to fatigue) there so that other participants could reach the summit as per the planned schedule. Bharat asked me to go ahead with others as he decided to accompany her in the col till the dawn. Since all other members were quite experienced in trekking, it didn’t take us too long to reach the base of the fort.

CLIMBING UP THE LINGANA FORT

By the time we reached the base, Indrajeet from WTA team had started setting up the ropes on the hooks already mounted on the hill, at regular intervals. We started climbing at 6 am with rope attached to carabiners which were in turn tied to harnesses we were wearing. The initial patch was easy to climb but the eroded soil made it difficult to get a good grip. There are some 4 major rock patches to climb, each raising the bar in terms of difficulty level.

After the last big rock patch, a narrow path led us to the splendid view of the Sahyadris. We reached the summit at around 10 amand were welcomed by the view of Raigad Fort – the capital of Maratha Empire. Behind us was the Rayling plateau with Torna Fort(the first fort of the Maratha Empire) in the background. With only a narrow patch on the top with a deep valley on both sides, it was indeed an exhilarating experience.

RAPPELLING DOWN THE LINGANA FORT

We had our packed lunch atop the fort and then Prasad gave us rappelling instructions. Rappelling down the Lingana fort is considered more difficult that climbing up. This is where this trek actually lives up to its reputation of being a “very difficult” grade trek. Reason being – the heat that starts dehydrating your body, waiting period for your turn for rappelling and the several patches with scree that makes it difficult to rappel down the last patch. We started rappelling down our first patch of about 120 ft at around 11 am.

After two rappelling patches there was a cave that could accommodate 25-30 people.This was the only place on the entire fort where one could take rest. But due to time constraints, we were not allowed to stay there for more than 15 minutes. As it can be seen from the shape of the Lingana fort, there was hardly any space for two people to walk beside each other easily. We were always tied up to the rope with our carabiners to avoid a fatal fall to either side.

As if the first three rappelling patches were not difficult enough, the final rappelling patch tested our patience to the core. There was no actual rock wall to rappel down here. It was actually the initial patch which was easy to climb up but was now difficult to climb down due to the scree. This was the patch that took the longest for all the members to rappel down. Finally after toiling for more than 6 hours, we reached the base of “Boratyachi Naal”. Utilizing whatever energy left in us, we climbed up the col and reached our campsite at 6:30 pm. We had our dinner at the Mohari village and reached Pune at 11 pm.

Lingana trek holds a special place in my heart as this was the first trek which actually taught me the importance of the discipline in terms of time management. I met quite a few Lingana summiters later in my life who told me their harrowing experiences of having to rappel down at night due to poor time management. It also taught me the importance of experience and being attentive to instructions given by trek leaders.

HOW TO REACH LINGANA FORT

One can reach Lingana Fort by two routes:

1.  Reach Mahad city by State Transport (ST) buses from Mumbai/ Kalyan/ Thane and board another bus to Pane village which is at the base of the fort. One can then reach the Railing plateau on foot.

2.  Reach Velhe village from Swargate, Pune by bus and from there one can trek via Velhe – Bhatti – Harpud – Dhangar Wada – Mohari – Railing plateau route

- One can stay for a night in houses of the locals (on request) at Velhe or Mohari.

One has to carry the food to the campsite as there are no food facilities available near the fort. There is a lone Hotel Lingana at Mohari (3 kms away from the plateau). Apart from that, one can even ask the locals at Mohari to cook food, but well in advance.

Hardly any space to take over other trekker 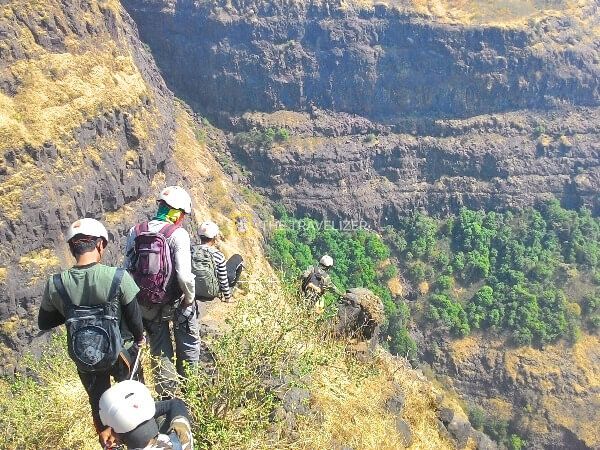 Fellow trekkers waiting for their turn to rappel down 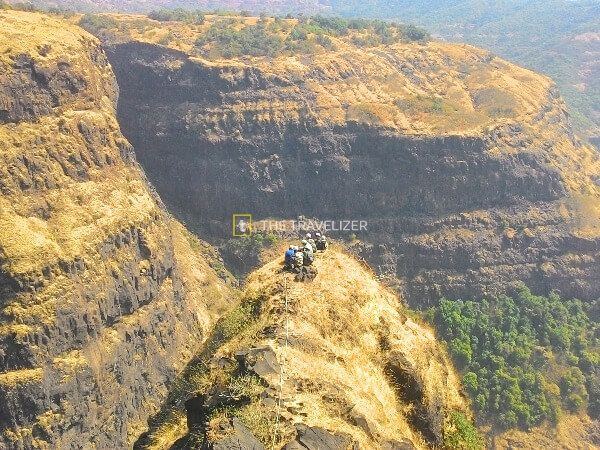 Rappelling down one of the patches 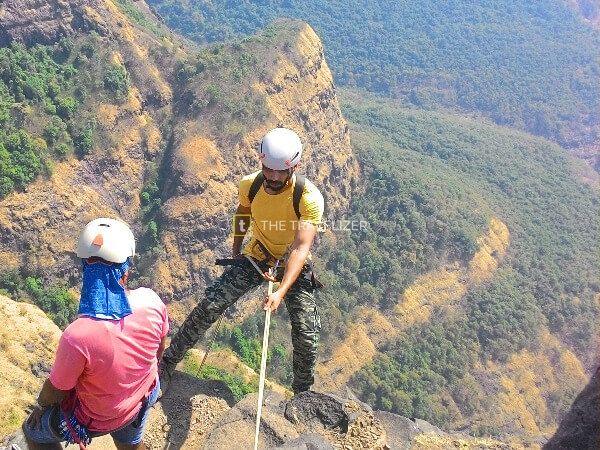 Group photo after the summit 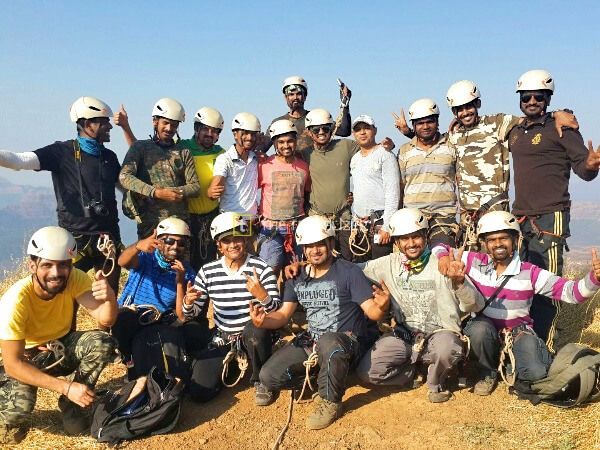 View of Raigad Fort from the top of Lingana 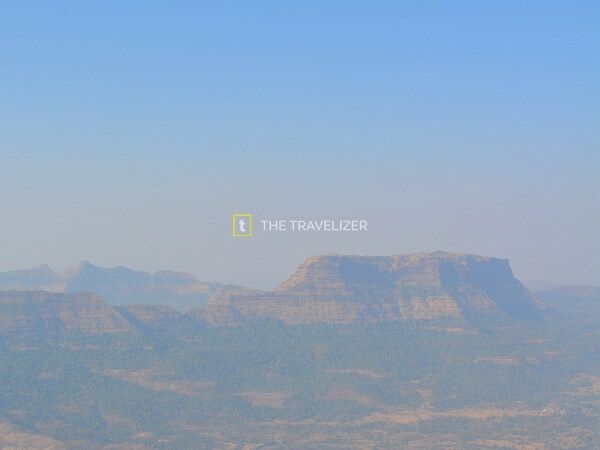 Railing plateau and "Boratyachi Naal" on the right 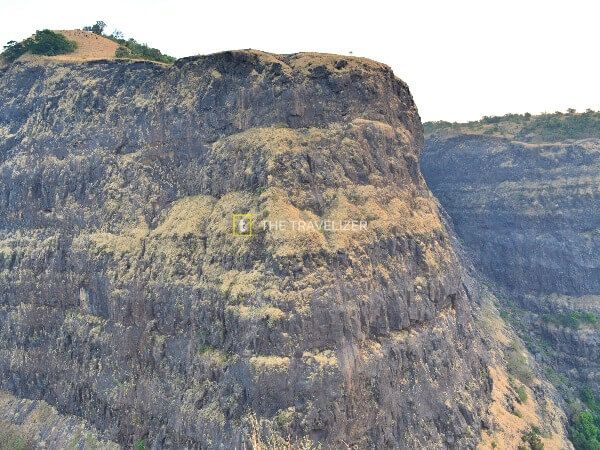 View of Railing plateau from the top of Lingana Fort 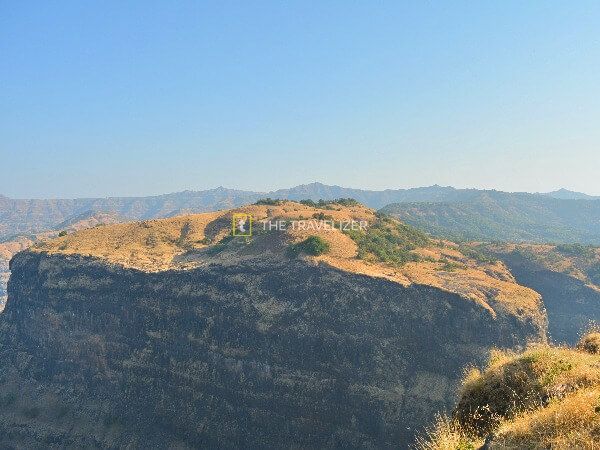 Pallavi somehow managed to click me from the Railing plateau 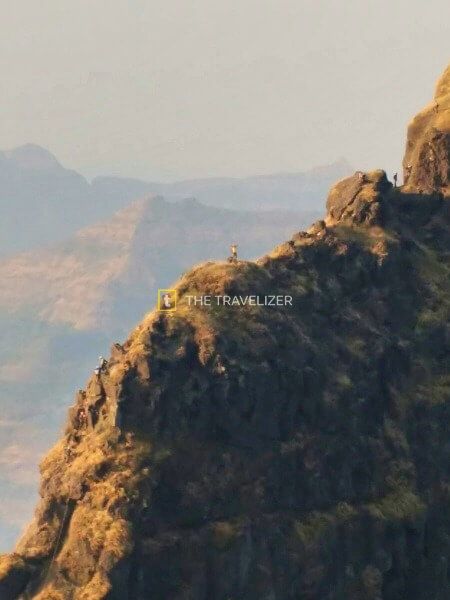 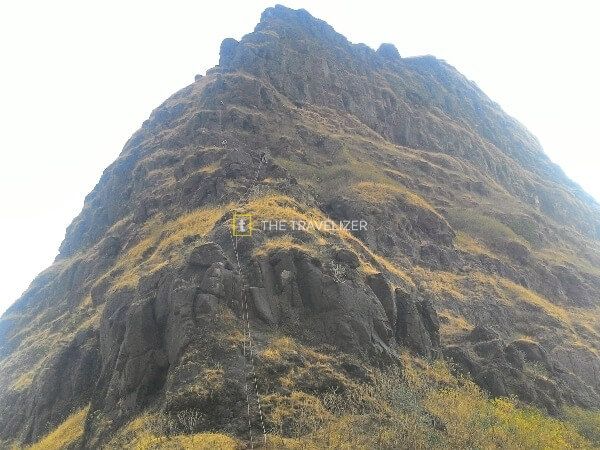 The loose boulders in the "Boratyachi Naal" 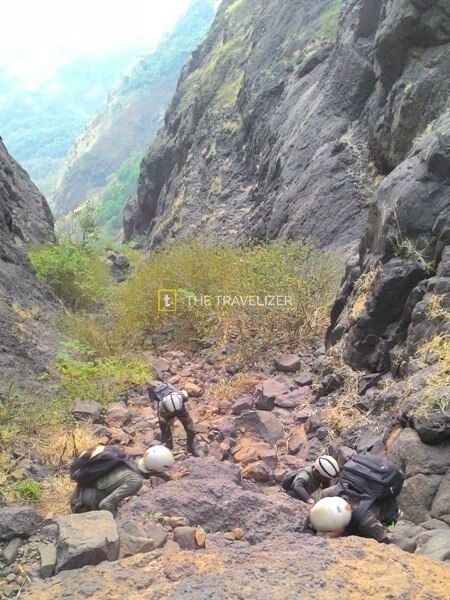